The synthesis of nanoparticles using physical and chemical methods has been well exhibited in various studies, but these methods are less ecofriendly, and more expensive and poisonous [1, 2, 3]. So, there is a need to adapt a natural route, for example plant extract, bacteria [4], fungi [5], enzymes [6], and algae [7], for the production of ecofriendly metal nanoparticles (NPs). All these routes are presently under an extensive research process [8]. Due to the conducive behavior towards biological processes, they have widely been used in the medical field, particularly against bacterial activity [9].

The extensive utilization of antibiotics to control bacterial infections is causing microbes to become resistant against multiple drugs. Now the leading problem which is faced around the world is to provide a sound, effective and natural treatment against microbial strains which have become resistant to drugs. Hence, the application of NPs in the field of medicine is considered to be an alternative bactericide, which showed remarkable bactericidal activity. As these NPs disrupt the cell membrane of bacteria and generate reactive oxygen species (ROS) in order to destroy the living machinery of the cell, they have a wide range of antibacterial activity against both gram-negative and gram-positive bacteria [10, 11]. The antibacterial activity of various NPs synthesized from algae has been evaluated against bacterial pathogenic strains. It has been investigated that the bacterial strain of Raoultella planticola (formerly Klebsiella planticola), Pseudomonas aeruginosa, Bacillus subtilis, and other Bacillus sp. [11, 12, 13] showed decrease in growth against AgNPs synthesized from brown seaweed Padina tetrastromatica. In another investigation, AgNPs of colloidal shaped particles prepared from marine green algae Caulerpa serrulata showed remarkable bactericidal activity at very low concentration against Shigella sp., Staphylococcus aureus, Escherichia coli, P. aeruginosa and Salmonella typhi [14, 15, 16].

In the present investigation, AgNPs synthesized from red algae Halymenia porphyriformis and Solieria robusta (Rhodophyta) [17] were examined against dental pathogens. The phytochemical screening of various species of this genus confirms the presence of phytochemical constituents including saponins, flavonoids, terpenoids, carbohydrates, glycosides, protein, fats and alkaloids [18, 19]. It has been reported that alkaloids are abundantly found in Rhodophyta and the presence of these alkaloids plays an important role in the pharmaceutical field as an antibacterial [20, 21, 22], antifungal and insecticidal agent, along with its role in neurotransmission, neuromodulation, growth regulation, antioxidant and cytotoxicity [23, 24]. Flavonoids are known to be a nature’s delicate drug, all these phytochemicals enhancing the antimicrobial and antioxidant activities [25, 26, 27].

Along with this, silver is known to be a toxic agent for microbes, as Ag ions cause structural and morphological changes in bacterial cells and thus disturb the biochemical machinery of the cell, which, in turn, causes cell death [28]. Out of all known metal nanoparticles, AgNPs have the highest bactericidal effects [29, 30] due to the formation of free radicals and subsequent free radical which induces membrane disruption. The antibacterial activity of AgNPs has been studied widely with human pathogenic agents [31, 32, 33]. There are innumerous microbial species in nature which are acidogenic and are involved in the origination and continuation of dental diseases in humans [34, 35, 36]. Streptococcus is considered to be one of the most common disease-causing agents in oral diseases [37, 38], especially plaque, because of its anomalous properties of fermenting sugars and synthesizing extracellular polysaccharides [39, 40]. The major disease-causing agents of root caries and coronal caries are S. sobrinus and S. mutans, and some acid tolerant species including S. sanguis, S. gordonii and S. oralis. The second most common etiologic agents are the species of Lactobacillus [41]. So in the present study it was studied to check the effect of different silver nanoparticles against bacteria inhabiting dental environment.

2. Materials and methods
2.1 Preparation of extract

Samples were collected from the sea coast of Karachi. Two specimens of red algae, i.e., Halymenia porphyraeformis and Soleria robusta were collected using scoop and then placed them in jars separately and labelled them accordingly. Collected samples were brought to the laboratory for further study.

Collected samples of H. porphyraeformis and S. robusta were washed properly with tap water so that excessive material washed away. After washing samples air dried by spreading them under the shade. After drying each sample was separately grinded into fine powdered form by using electrical grinder. After grinding samples were stored in the air tight containers with their respective label.

One gram of Halymenia porphyriformis was taken and grounded into fine powder. The mixture was heated on a hot plate at the temperature of 60–65 ºC for 10–15 min in 100 mL of distilled water. Filtration of the mixture was then done by using Whatman n1 filter paper. As a result, a pale yellowish colored extract of H. porphyriformis was obtained. Similar steps were followed in the preparation of the extract of Solieria robusta and a rusty orange colored extract was obtained (Fig. 1). The extract was used as a reducing and stabilizing agent [42, 43]. 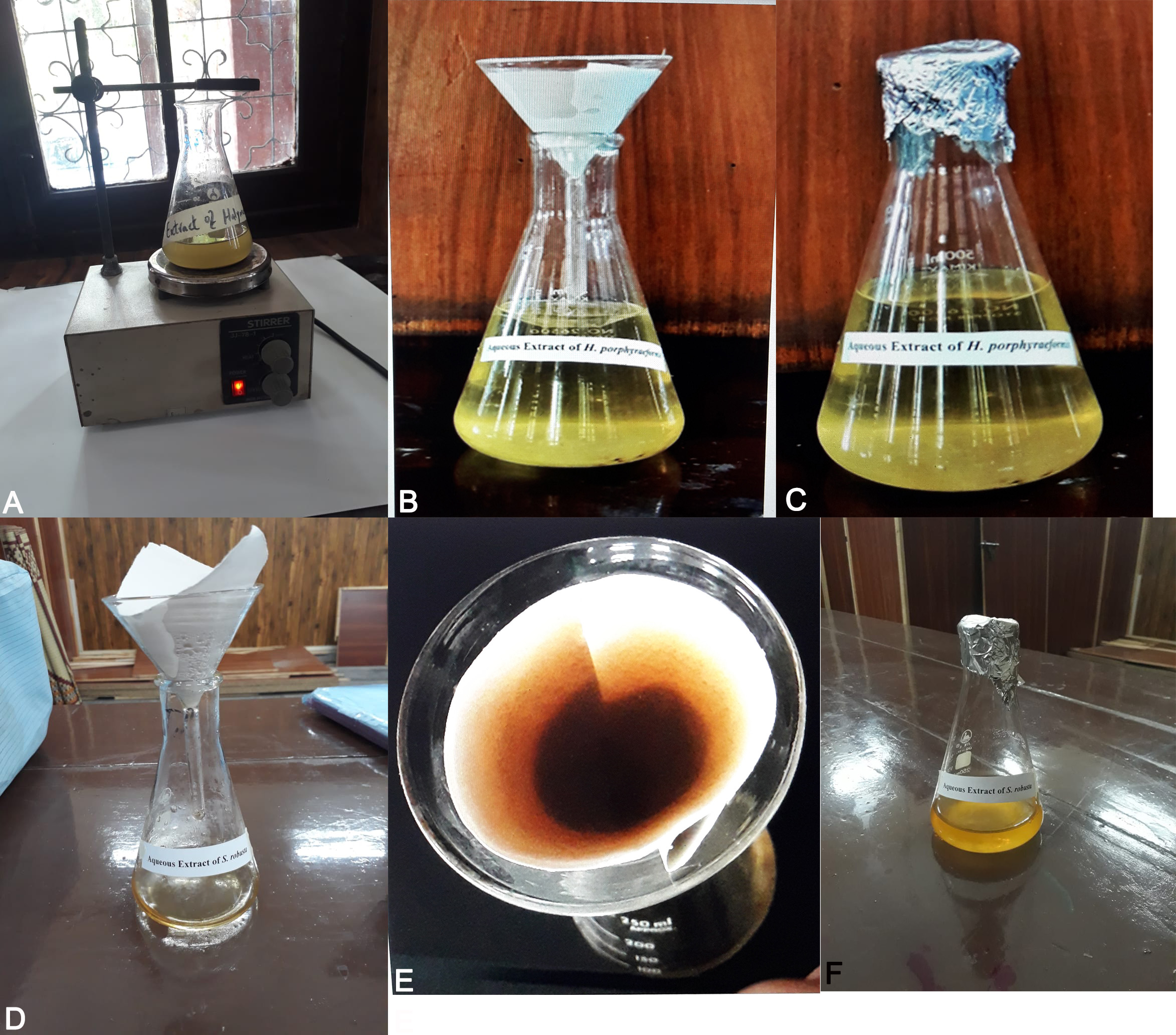 Two flasks were taken, one contained 20 mL extract of S. robusta and the other contained 20 mL extract of H. porphyriformis. For the preparation of the reaction mixture, the extract and 0.01 M silver nitrate were dissolved in the ratio of 8:1. The formation of AgNPs was observed by the appropriate color change for 24 h (Fig. 2). The reaction mixture was centrifuged at 12,000 rpm for 15 min. To obtain silver nanoparticles in powder form, the supernatant was discarded and the pellet containing silver nanoparticles settled down. It was collected in the separate centrifugation tube. The pellet obtained as a result of centrifugation was air dried by placing the centrifugation tubes open for about 3–4 weeks [42, 43].

2.3 Characterization of the synthesized particles

The suspensions from pure cultures of the selected bacteria were prepared by growing all pathogenic strains in a single colony with sub culturing in tryptone broth to reach 105–106 CFU. 10 mg of dried AgNPs were added to 10 mL of distilled water and then the mixture was sonicated in order to obtain a homogenous suspension of AgNPs at concentration of 1000 g/mL [45].

For the evaluation of antibacterial activity of synthesized silver nanoparticles, a well was formed in the center of inoculating Petri plates by using a cork borer of 3 mm in diameter. Three different concentrations (200, 100 and 50 g) of silver nanoparticles synthesized from H. porphyriformis and S. robusta were weighed and sonicated in distilled water which was then poured in the central hole in their respective Petri plates with the help of a micropipette. The plates were then placed in an incubation chamber for 24 h at 37 2 ºC , in order to observe the antibacterial activity. Three replicates were used for the experimentation (n = 3).

2.8 Determination of zone of inhibition

After 24 h, a zone of inhibition was observed in all the incubating Petri plates. Readings were taken in millimeter, or the determination of antibacterial activity of AgNPs of H. porphyriformis and S. robusta serial dilution method was used [46]. For the evaluation of MIC and MBC, three different concentrations of AgNPs were used, i.e., 200, 100 and 50 g/mL.

After the formation of the reaction mixture, a change in color was observed in both experimental groups. The reaction took time for completion of about 24 h. The color of the extract started changing from colorless to reddish brown after 24 h. The reddish-brown color specified the formation of silver nanoparticles.

Similar procedure was followed for the preparation of silver nanoparticles of S. robusta and H. porphyriformis. 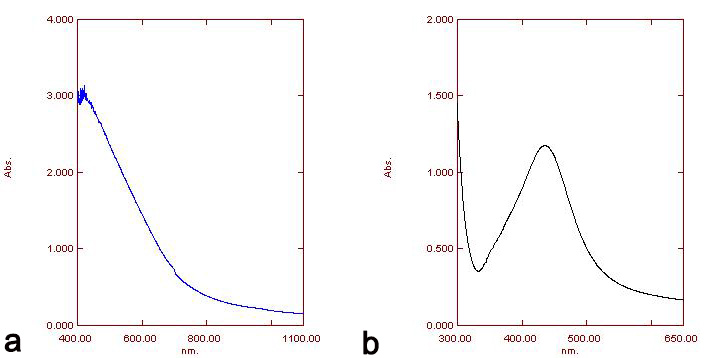 Absorption spectra UV-vis of AgNPs of H. porphyraeformis (a), and of AgNPs of S. robusta (b).

The morphology and structure of nanoparticles were observed by SEM analysis. The AgNPs of H. porphyriformis were cubic and spherical in shape while the particles synthesized from S. robusta were cubic and cylindrical in shape (Fig. 4). It has been proven that improved penetration due to high magnfication enables to observe the better surface morphology of nanoparticals which is only possible in SEM [47, 48, 49, 50, 51, 52].

The XRD analysis of both green synthesized nanoparticles was done. The maximum 2 theta value was 32.150 and 32.079. The sizes of the green nanoparticles were calculated using Debye Sherrer’s equation [42] (Fig. 5). 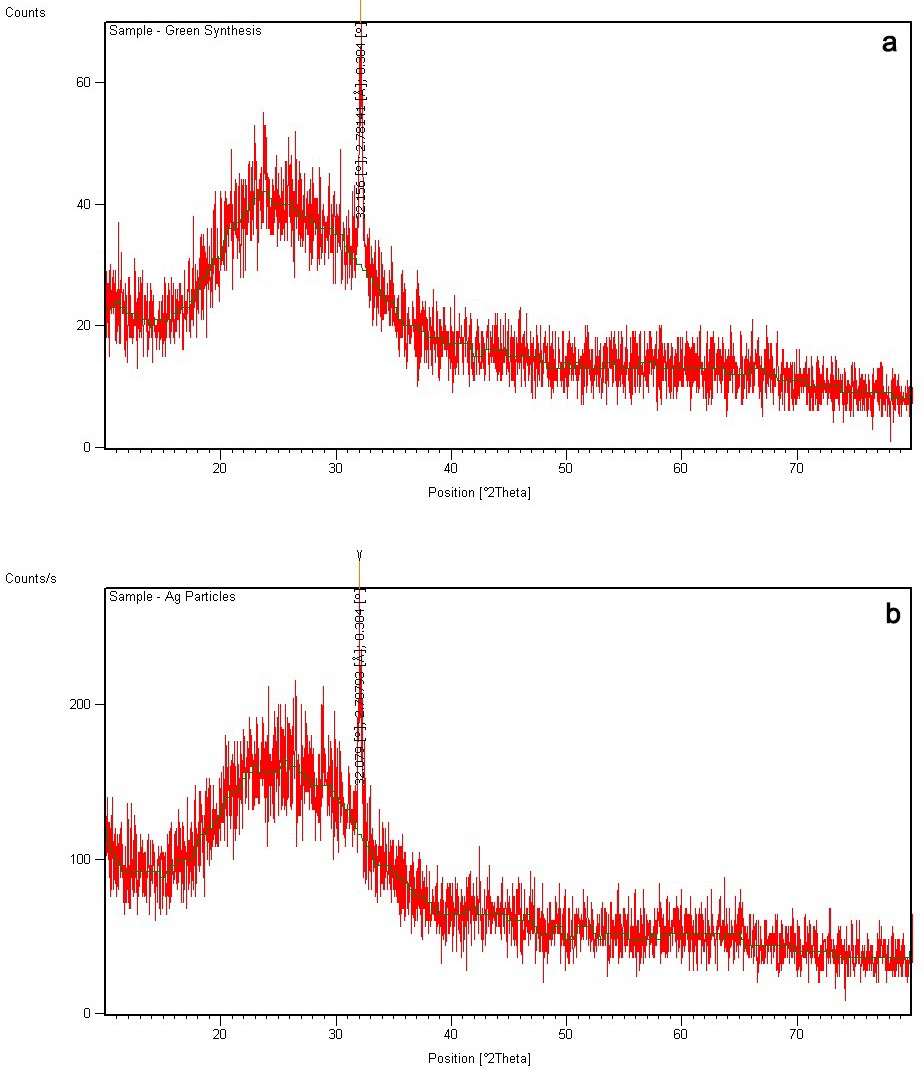 In this study, MIC and MBC of AgNPs of S. robusta and H. porphyriformis were investigated against four bacterial strains of dental pathogens. Agar media cultures were used to investigate antibacterial activity [53]. Results were statistically significant at a value p 0.05. The growth of these bacterial strains was investigated by measuring the wavelength at 600 nm after 24, 48 and 72 h. Amoxillin was used as positive control group. While for negative control distilled water was used in place of AgNPs. Optical density of both experimental and control group was noted. The MIC of all the samples were examined visually after 24 h of incubation and it showed that all three concentrations of AgNPs of S. robusta had no turbidity, while in the case of AgNPs of H. porphyriformis slight turbidity was observed in case of L. acidophilus and L. brevis at concentration of 50 g/mL so the MIC of both the tested AgNPs against all four strains of bacteria were 50 g/mL expect AgNPs of H. porphyriformis against L. acidophilus and L. brevis [47]. MIC against these two strains were 100 g/mL. Both control groups showed turbidity after 24 h of incubation, which demonstrated that it allows bacteria to grow. It was observed that the negative control group showed maximum turbidity [54, 55].

The present investigation suggested high antibacterial activity of silver nanoparticles of H. porphyriformis against dental pathogens as compared to the particles of S. robusta. This is due to the smaller size of 15.23 nm with narrowest size distribution and spherical shape of the particles of H. porphyriformis, which makes them more stable [53, 70]. Smaller particles have high surface to volume ratio, so they release more silver ions and proved to destroy more bacteria actively [71]. These particles easily pass through the peptidoglycan layer of bacterial cell wall because of their smaller size and thus damage the respiratory chain by disrupting the respiratory chain reaction. These results are supported by previous research [72, 73]. The dental pathogens were tested againt silver nanoparticals synthesized from red algae using the zone of inhibition and minimum bacterial concentration. The larger ZOI were observed in low concentration than those reported by other studies [68, 69, 73, 74, 75]. Furthermore the low concentrations exhibit more therapeutic potential. It is further reported that the least MIC and MBC depends on the partical size and the aggregation of the NPs [76]. Furthermore ,previous studies also showed that antibacterial activities depends on dose [77, 78]. It is clear from Tables 2,4,5 that low concentarion of NPs causes high MIC and cell death which is thought to be due to the reaction between the NPs and bacterial proteins present in the cell wall [79, 80, 81].

The present study proposed improved characterization techniques due to emerging advancement in this field would expedite controlled, comparative and approximate performance of AgNPs. Present research concluded that silver nanoparticles synthesized by using red algae are cost effective and helpful antibacterial agents and can be used in the future against oral pathogens. The results of XRD and SEM confirmed the possible destructive interaction towards the bacterial cell wall. The antibacterial activity is attributed highly penetrated due to the smaller size of the green synthesized nanoparticles Above study in this document showed that, in the near future, an exceptional boom may be observed in the biosynthesis of algae-based NPs that will possibly have remarkable applications of antibacterial agents against the treatment of very resistant dental bacterial pathogens.

The collection of samples and idea of research was given by UH and KDK. Bacterial strains were provided and identified by IL and SB. Statistical analysis and experimental process was guided by SS and UFA. Experimatation was done by the help of MDK and SI while formatting of manuscript was done by LP. All authors contributed to editorial changes in the manuscript. All authors read and approved the final manuscript.

This work had the support of “Fundação para a Ciência e Tecnologia (FCT)”, through the strategic projects (No. UID/MAR/04292/2020) granted to MARE.

The authors declare no conflict of interest. LP is serving as one of the Guest editors of this journal. We declare that LP had no involvement in the peer review of this article and has no access to information regarding its peer review. Full responsibility for the editorial process for this article was delegated to Baohong Zhang.