Lung cancer, including mainly small cell lung cancer and non-small cell lung cancer (NSCLC), is the most common malignancy and causes a large number of deaths worldwide [1]. NSCLC includes adenocarcinoma, squamous and large cell lung cancer [2]. The 5-year overall incidence of lung carcinoma (LUAD) in China has remained low for the past 30 years [3]. Surgery, radiotherapy, chemotherapy, and targeted therapies are the first-line treatments for this cancer type. However, the above treatment strategies often have limited efficacy in locally advanced, metastatic and recurrent disease, and hence the treatment of LUAD requires new therapeutic approaches [4]. Exploration of the underlying mechanism of LUAD development and progression is therefore vital for the identification of novel therapeutic strategies.

TACC (transforming acidic coiled-coil protein) family members, including TACC1, TACC2 and TACC3, were first discovered in multiple myeloma [5]. In addition to maintaining centrosome microtubule nucleation and regulating centrosome integrity during mitosis [6], the TACC family has also been implicated in tumorigenesis. Recently, abnormal expression of TACC1 and/or TACC3 was observed in ovarian, breast, melanoma, bladder, NSCLC and prostate cancers [7, 8, 9, 10, 11, 12]. Abnormal expression of TACC2 was also reported in prostate cancer [13], breast carcinoma and hepatocellular carcinoma [14, 15]. Furthermore, fibroblast growth factor (FGFR) 1-TACC1 and FGFR3-TACC3 gene fusions, which are associated with aneuploidy and have oncogenic activities, have been reported in various cancer types [16, 17]. These findings suggest that TACC3 may potentially contribute to tumorigenesis.

Mounting evidence has shown that TACC3 overexpression is associated with tumor aggressiveness and poor prognosis in prostate [8], breast [7], colorectal [9], gastric [10], and human renal cancers [18]. However, the expression status of TACC3 in LUAD remains largely unclear. Here, we investigated the relationship between TACC3 expression and the outcome of LUAD patients using bioinformatic analysis. Our findings indicate that TACC3 could serve as a potential prognostic biomarker in these patients.

Fresh tissue (n = 6) with histologically confirmed cancer was obtained from LUAD patients who had not undergone any prior treatments and who were admitted to the Fourth Hospital of Hebei Medical University.

GEPIA (http://gepia.cancer-pku.cn/) is a newly developed interactive web server for analyzing RNA sequence expression data for 9736 tumor and 8587 normal samples from the TCGA and GTEx projects using a standard processing pipeline [20]. TACC3 expression in LUAD was determined in the single gene expression analysis using the following thresholds: logFC cutoff = 0.5 and p-value cutoff = 0.01. In the survival analysis, the threshold was determined according to the following values: group cutoff: median; cutoff-high (%) and cutoff-low (%): 50 and 50.

UALCAN is a comprehensive and interactive web resource (http://ualcan.path.uab.edu/index.html) designed to provide easy access to publicly available cancer OMICS data (TCGA and MET500), thus facilitating the identification of candidate biomarkers. The expression of TACC3 and patient survival data were selected from the TCGA databases, with p 0.05 considered significant.

Based on a meta-analysis, the Kaplan Meier plotter (http://kmplot.com/analysis/) is capable of assessing the association of 54,000 genes with patient survival in 21 cancer types [21, 22]. The correlation between TACC3 expression and overall survival (OS) in LUAD, as well as with First Progression (FP), was analyzed using mRNA data. Patients were divided according to the median value, with the cutoff value set as auto select.

To assess the diagnostic value of TACC3, ROC curves were generated using SPSS 26 (IBM SPSS Statistics, Chicago, IL, USA). The AUC was determined and is shown for each panel.

To identify potential mechanisms that underlie the associations of TACC3 expression in LUAD, KEGG analysis was performed to determine whether an a priori defined set of genes was differentially expressed between high and low TACC3 expression groups [23]. Gene sets with a normal p-value of 0.05 and false discovery rate (FDR) of 0.05 were considered to be significantly enriched.

qRT-PCR was performed to determine the expression of TACC3 mRNA. Briefly, total RNA from the surgically obtained paired (tumor and normal) tissues (n = 6) was isolated using the TRI Reagent RNA Isolation Reagent (Sigma-Aldrich) according to the manufacturer’s instructions. The first-strand template complementary DNA (cDNA) was synthesized using a reverse transcription kit (Takara, Japan). The primer sequences were as follows: TACC3: 5’-CCTCTTCAAGCGTTTTGAGAAAC-3’ (sense) and 5’-GCCCTCCTGGGTGATCCTT-3’ (antisense); -actin: 5’- CGCGAG AAGATGACCCAGAT-3’ (sense) and 5’-GGGCATACCCCT CGTAGATG-3’ (antisense) [10, 18]. -actin was used as the internal control. The PCR reaction was performed as follows: denaturation at 94 °C for 3 minutes, and then 35 cycles of 94 °C for 30 seconds, 56 °C for 30 seconds, 72 °C for 2 minutes, and finally an elongation step at 72 °C for 10 minutes. Three independent experiments were performed.

All analyses of the TCGA data were conducted using R software (version 3.6.1). Univariate Cox regression analysis was used to select potential prognostic factors, and multivariate Cox analysis was performed to determine the correlation between TACC3 expression and survival, as well as with other clinical features. Statistical analyses were performed using SPSS 26 (IBM SPSS Statistics, USA), with p 0.05 considered to be statistically significant.

3. Results
3.1 Characteristics of LUAD Patients from the TCGA

TACC3 mRNA expression in LUAD was determined from the Oncomine, GEPIA and UALCAN databases. The level of TACC3 expression was higher in LUAD tissues compared with normal tissues (Fig. 1A–C). These results were further confirmed by analysis of the TCGA database (p = 2.672e-11, Fig. 1D). In addition, a significant difference in TACC3 expression was observed in a paired comparison of LUAD with adjacent normal tissues (p = 2.343e-15, Fig. 1E). These results demonstrate that TACC3 was highly expressed in LUAD compared with normal tissues. 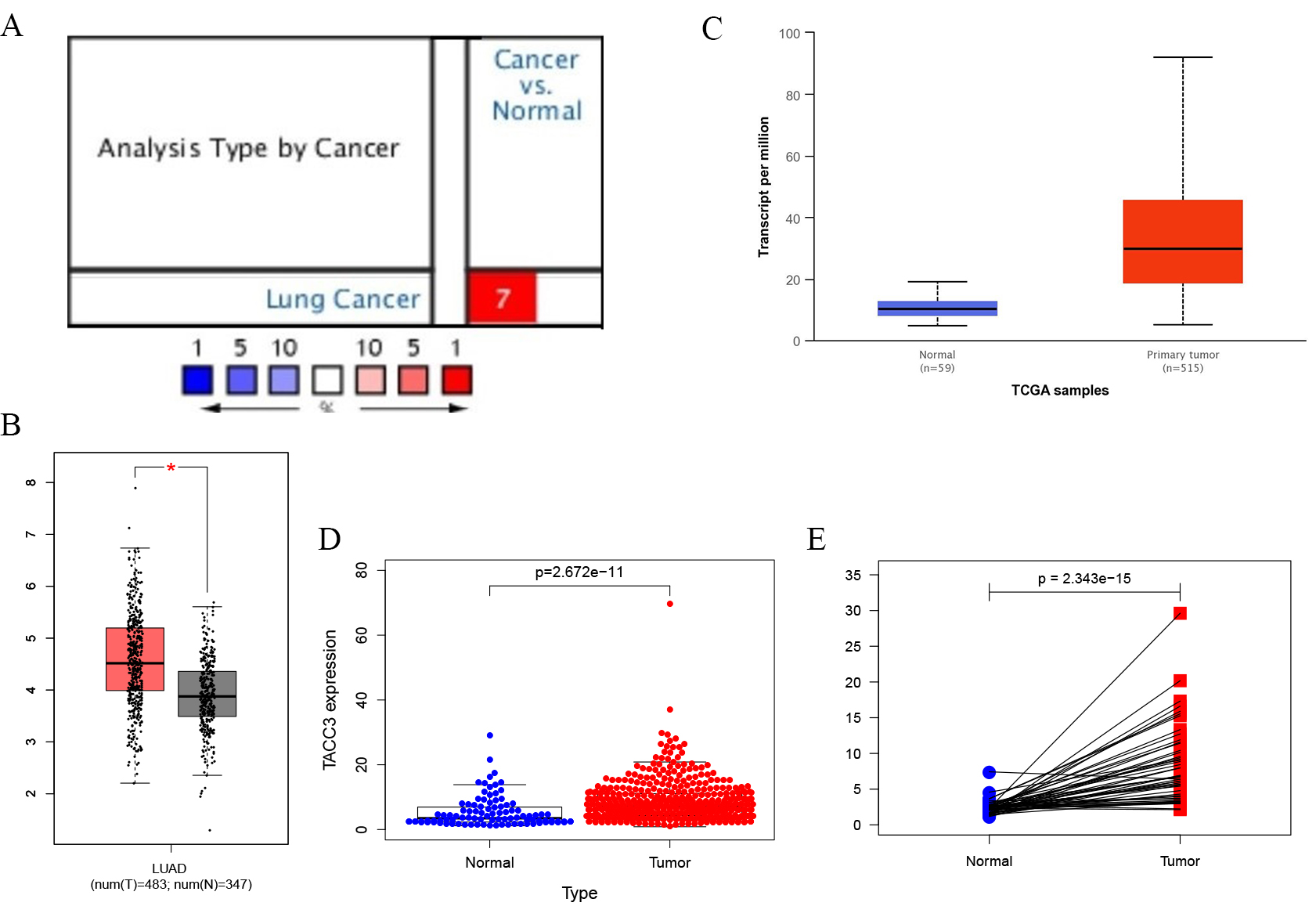 3.3 Prognostic Value of TACC3 in LUAD 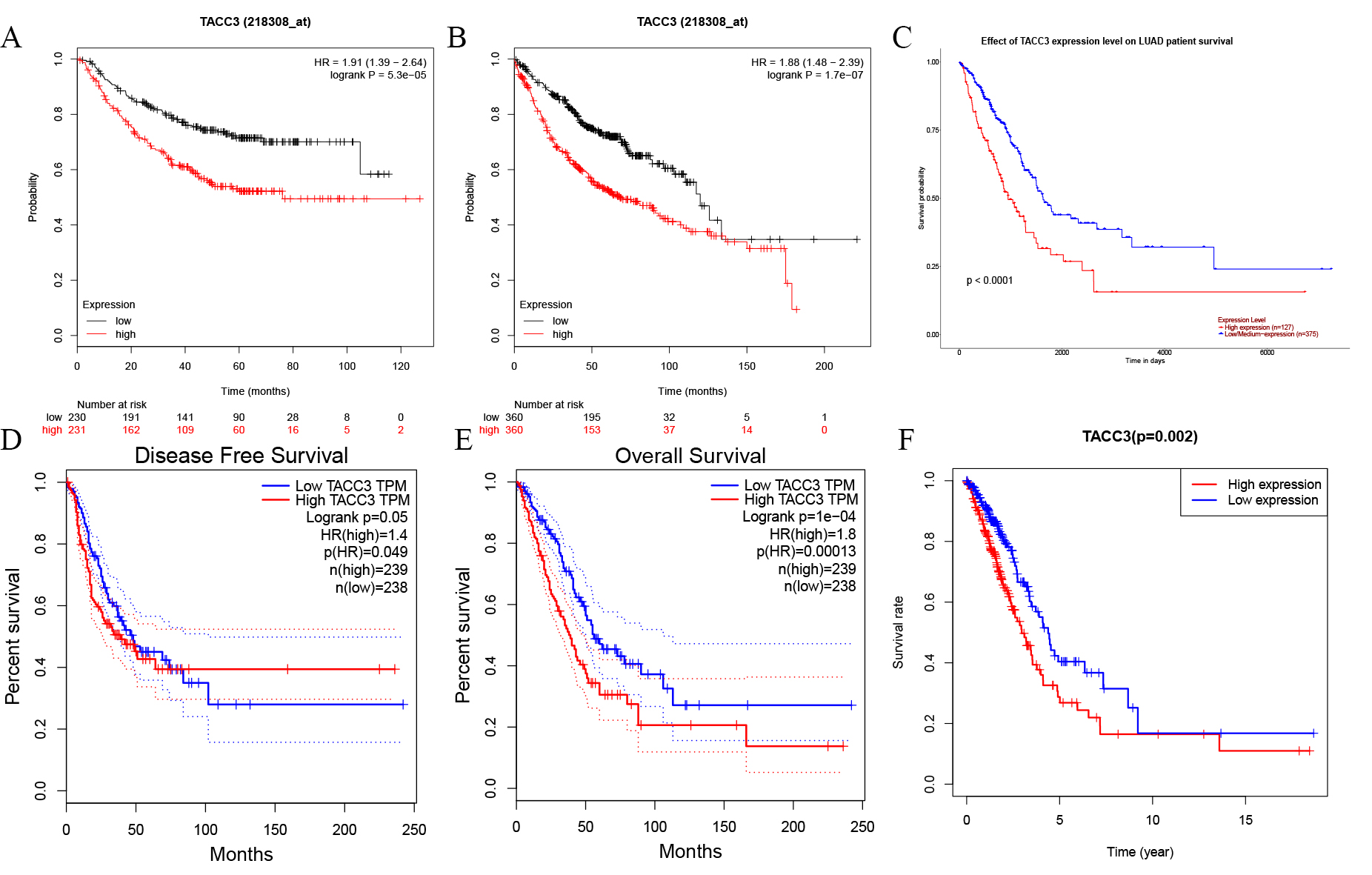 3.4 Association of TACC3 Expression with Survival in Clinical Subgroups of LUAD Patients 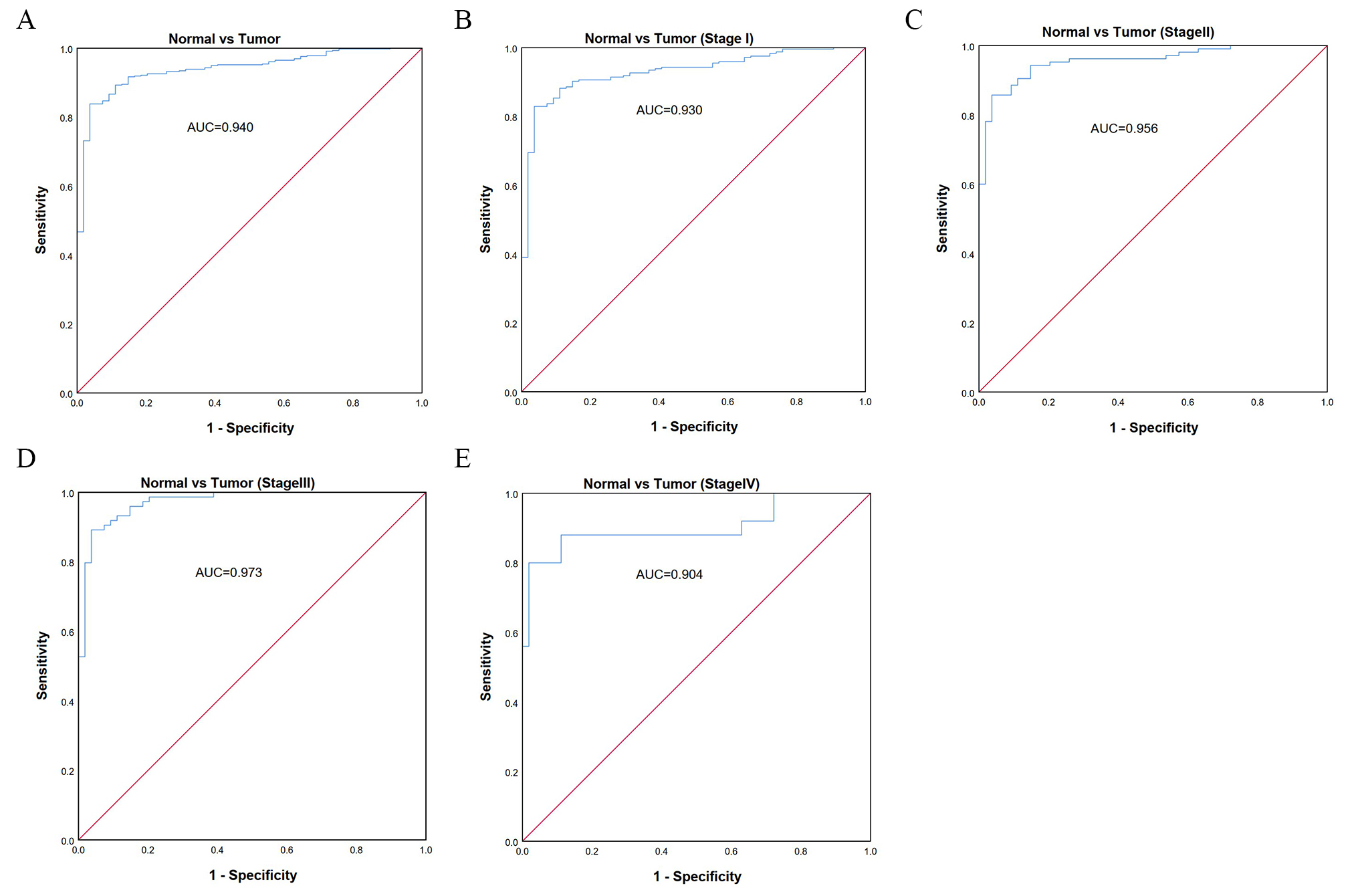 Table 3.Univariate and multivariate analysis of clinicopathological factors and of TACC3 expression with OS in LUAD patients. 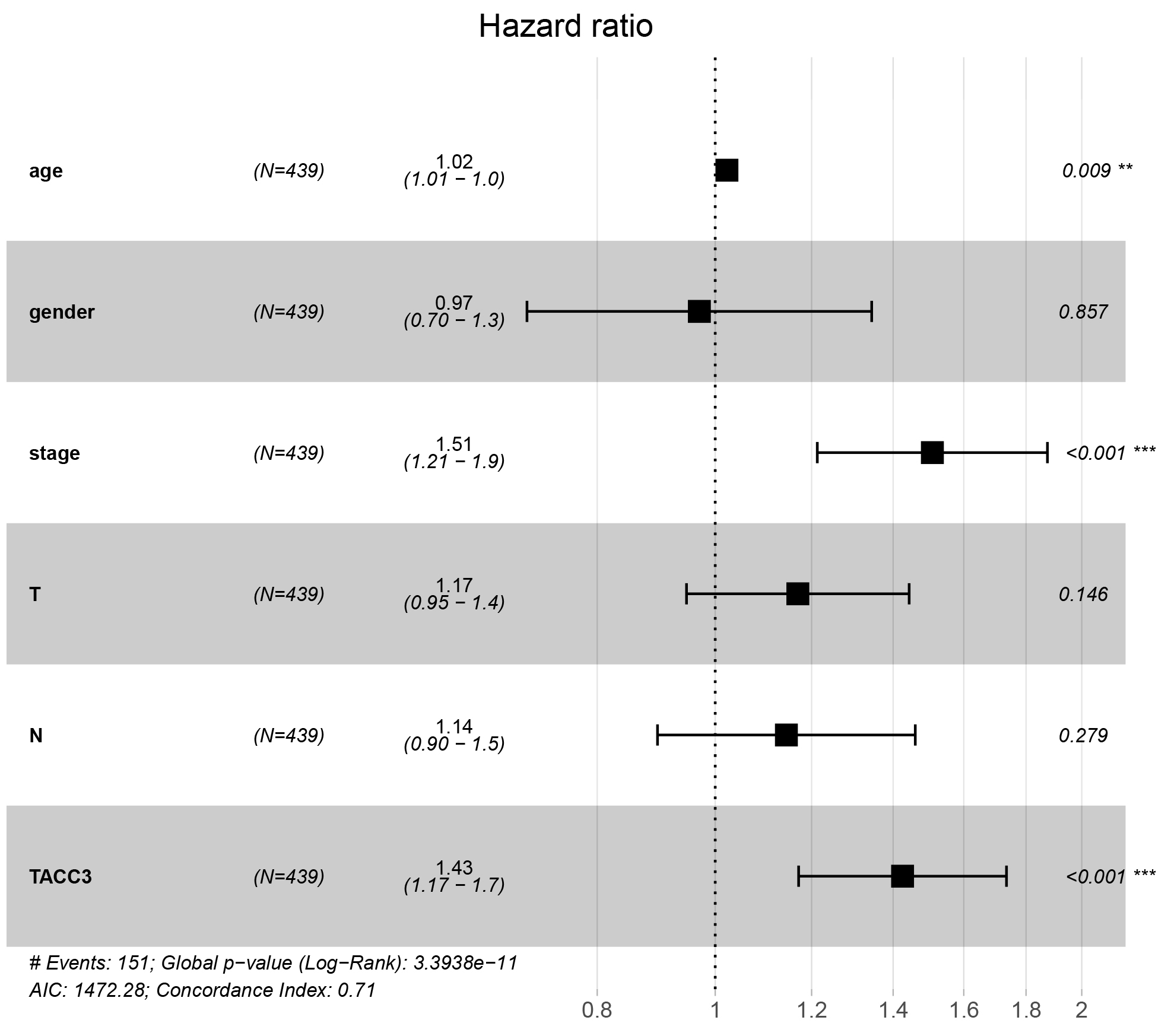 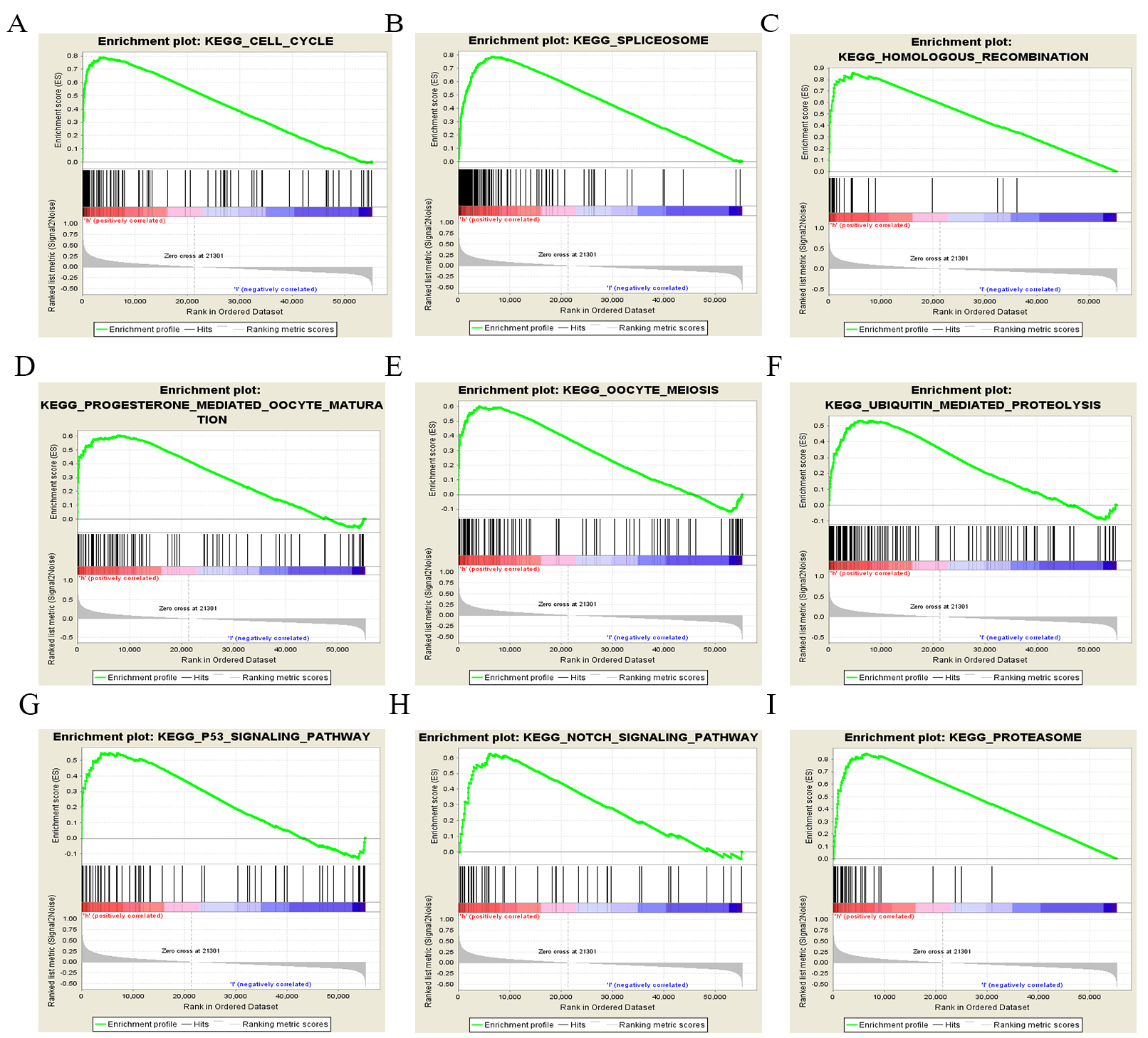 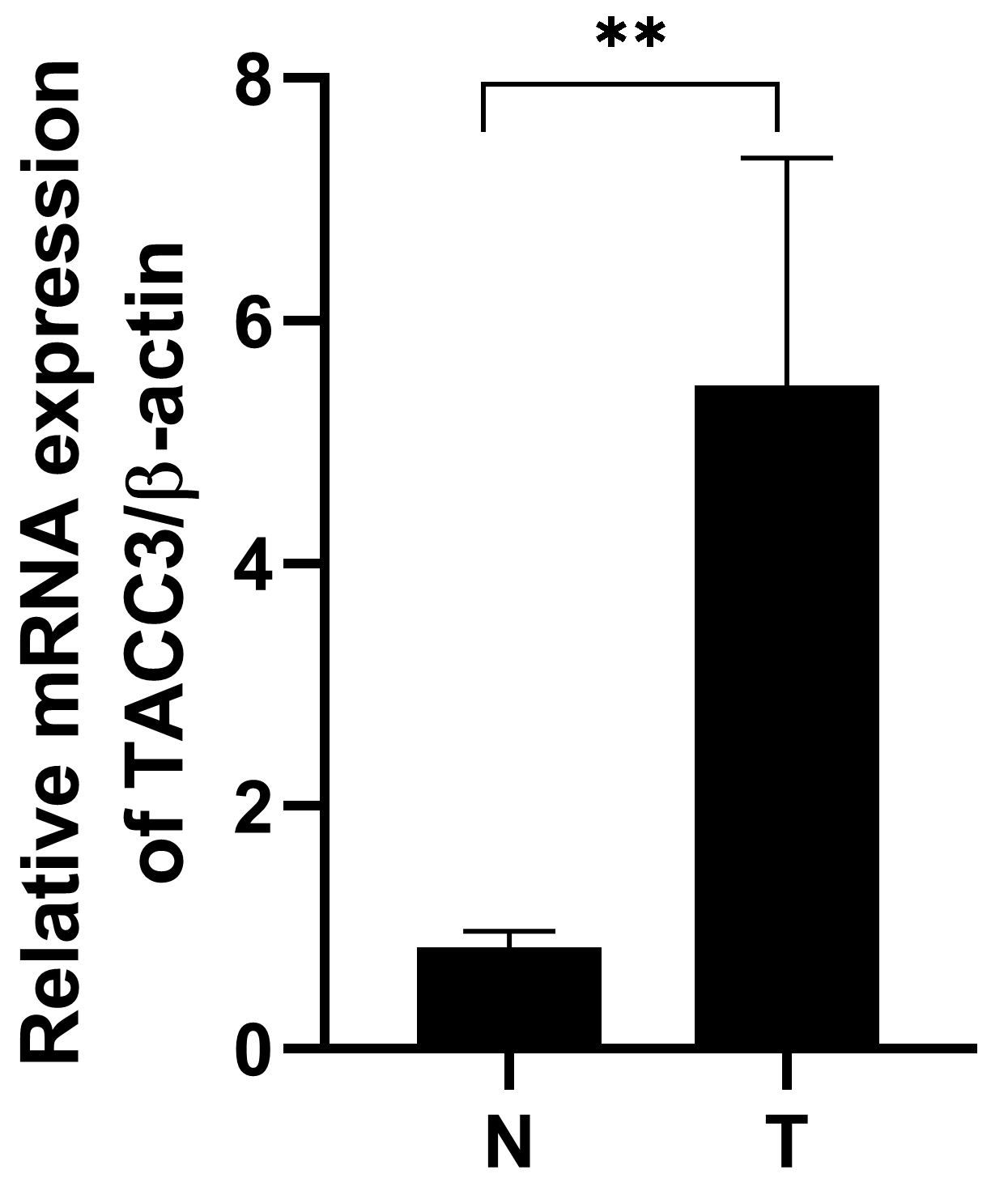 Increasing evidence suggests that TACC3 is associated with various types of human cancers, including breast [7, 24, 25], prostate [8], colorectal [9], bladder [26], gastric [10], ovarian [27], melanoma [28], and liver [29] cancers. However, little is known about the expression of TACC3 in LUAD. Recently, genomic alterations in members of the FGFR family were reported in several tumor types including breast, bladder, prostate, and lung cancer. FGFR3-TACC3 fusions have also been identified as novel genomic alterations in LUAD, mostly in patients who were never or limited smokers [16]. These results suggest that TACC3 could play an important role in LUAD progression. The present study demonstrated a significant relationship between TACC3 expression and patient survival in LUAD. This was further validated using Cox regression and ROC curve analyses.

Various databases including Oncomine, TMIER, Kaplan-Meier plotter, GEPIA, UALCAN, and TCGA were analyzed in this study to evaluate the prognostic significance of TACC3 expression in LUAD. Although different databases and methods were used, similar results were obtained. Our study found that abnormally high TACC3 expression in LUAD was associated with the poor survival of these patients, suggesting that TACC3 may play an important role in the progression of LUAD. Univariate and multivariate Cox analyses confirmed that TACC3 expression may be a valuable prognostic biomarker for LUAD, and ROC curve analysis strongly validated the diagnostic value of TACC3 in LUAD.

A growing number of studies have proposed possible mechanisms to explain the relationship between TACC3 expression and patient prognosis in malignant cancers. In cervical cancer, TACC3 may promote the epithelial-mesenchymal transition (EMT) phenotype through activation of the PI3K/AKT and ERK signaling pathways [11]. TACC3 knockdown was also shown to inactivate PI3K/AKT signaling in kidney renal clear cell carcinoma [18]. These studies suggest that TACC3 may promote the EMT phenotype in cancer cells by regulating PI3K/AKT signaling. However, in the current study we found no significant enrichment of PI3K/AKT signaling pathway genes in LUAD using GSEA3.0 software (UC San Diego, CA, USA). This discrepancy may be due to the different materials and raw data, and/or to the different analysis methods used in the present study. More experiments are required to investigate the possible involvement of TACC3 with EMT and PI3K/AKT signaling in LUAD. However, we found that other cancer-associated signaling pathways, including non-small cell lung cancer and small cell lung cancer, as well as other tumor types, were associated with the high TACC3 expression phenotype, indicating that TACC3 may also be involved in other cancer types (Table 4).

In conclusion, analysis of the Oncomine and TCGA databases revealed that a high level of TACC3 expression was associated with poor prognosis in LUAD. This result was further verified by Cox regression and ROC analysis. Therefore, TACC3 may be a clinically useful prognostic biomarker in LUAD patients.

The study protocol was approved by the Institutional Research Ethics Committee of the Fourth Hospital of Hebei Medical University. All patients gave informed consent for the study.