Trastuzumab-emtansine (T-DM1, commercial name: Kadcyla) is a maytansinoid-based antibody-drug conjugate (ADC), which was first approved for patients with human epidermal growth factor receptor 2 (HER2)-positive metastatic breast cancer [1]. Since its success in 2013, more than 10 ADCs been introduced into the market [2, 3].

In addition to limited in vivo profile, the heterogeneity of T-DM1 could be problematic from a chemical manufacturing and control point-of-view. Some HPLC analyses, which are the most common approaches for determining the DAR, fail to provide clear chromatographic results [7, 8]. To overcome ADC heterogeneity, several site-specific conjugation methods to produce more homogeneous ADCs have been developed [9]. Thus, our research group conceived a proprietary technology utilizing an Fc-affinity peptide, which can install a bi-orthogonal group onto antibodies in a site-selective manner, thereby enabling the site-specific ADCs syntheses (Fig. 1) [10, 11]. 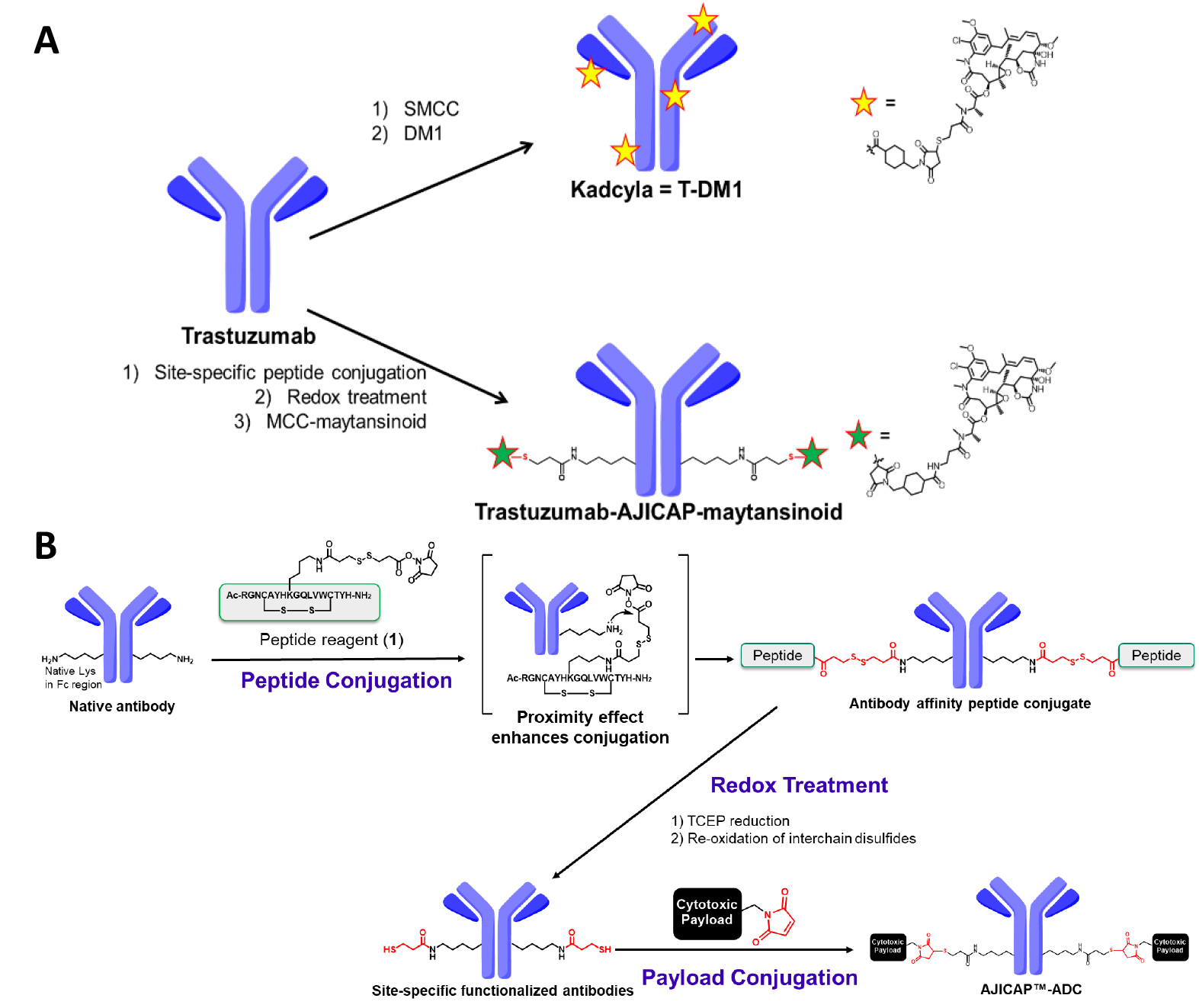 This platform, termed “AJICAP”, has been advantageous in several studies. First, its proof of concept was reported in 2019, showing highly efficient and versatile conjugation applied to several mAb subtypes such as IgG1, IgG2, and IgG4 [10]. Peptide mapping analysis of the resulting homogeneous ADC confirmed its conjugation site-occupancy at Lys 248 in the antibody Fc region [12]. The larger scale ADC preparation using a glass reactor vial based on the good manufacturing practice strategy indicated the high productivity and robustness of the AJICAP technology [13]. In addition, site-specific AJICAP-ADCs have been used as a demonstration tool to develop novel analytical approaches [14].

In contrast to the numerous synthetic/analytical reports on AJICAP-ADCs, there have been limited studies on their biological profile. Furthermore, no studies have performed a direct comparison between AJICAP-ADC and commercially available ADCs.

In order to provide a TI comparison between AJICAP-ADCs and traditional ADCs in the market, we decided to demonstrate the rat toxicology study of trastuzumab-AJICAP-maytansinoid (DAR = 2) as compared to commercially available T-DM1 (DAR = 3.4). The combination of this safety study and a previously reported efficacy study enables comparison of the TI, thereby resulting in a wide enhancement of TI by AJICAP technology [15]. To supply a sufficient quantity of trastuzumab-AJICAP-maytansinoid, gram-scale ADC preparation was also performed, thus, supporting the robustness of the previously established conjugation process [13]. To adapt the AJICAP method of conjugation, a cysteine-reactive maytansinoid (MCC-maytansinoid, Fig. 1) was synthesized as previously reported [16]. The stability of trastuzumab-AJICAP-maytansinoid was assessed to determine its appropriate storage conditions [17, 18]. Overall, the results described herein support the previously reported advantages of AJICAP conjugation platform enabling site-specific ADC production.

Site-specific thiol intermediate was produced by a previously established procedure [13].

To a solution of site-specific thiol intermediate (6.8 mg/mL, 1.63 g) in a PBSE buffer (50 mM phosphate buffered saline (PBS), 10 mM ethylenediaminetetraacetic acid (EDTA), pH 7.4), dimethylformamide (DMF) (15 mL) and a 10-mM DMF solution of MCC-maytansinoid (10 eq., 11.7 mL) were added to form a mixture, which was then incubated at 20 °C. After 2 h, a small amount of the reaction mixture (0.5 mL) was sampled for the in-process control (IPC) analysis. Subsequently, the reaction mixture was quenched with an excess amount of a 50-mM aqueous solution of N-acetyl cysteine (NAC) and then incubated at 25 °C for 15 min. This reaction mixture was purified with a tangential flow filtration (TFF) system using a Sartocon Slice 200 Eco Hydrosart membrane (30 kDa; Sartorius) and diafiltration (DF) buffer as the conjugation buffer at an antibody concentration of 20 mg/mL. Next, buffer exchange of this solution was performed using a TFF system with a Sartocon Slice 200 Eco Hydrosart membrane (30 kDa; Sartorius) and DF buffer as the formulation buffer (20 mM histidine containing 5% trehalose, pH 5.2) at an antibody concentration of 5.7 mg/mL. Trastuzumab-AJICAP®-maytansinoid 4 (1.67 g, 98% yield) was then afforded in the formulation buffer.

The reductive pre-treatment was performed as previously reported [19].

RP-HPLC analysis was performed according to a previously reported study [19].

HIC HPLC analysis was performed according to a previously reported study [20].

Three sets of standard solutions of trastuzumab-AJICAP-maytansinoid (4) were prepared in a formulation buffer. All the samples were stored at various temperatures (–80, –20, 4, 25, and 37 °C) for 4 weeks. Aggregation was then analyzed using size-exclusion chromatography (SEC)-HPLC.

Sixty 8-week-old female Sprague-Dawley rats (Charles River Japan, Tokyo, Japan) were provided ad libitum access to a standard diet (Oriental Yeast, Tokyo, Japan) and water. Following the acclimatization period (1 week), the animals were stratified by body weight and randomly assigned to the following groups: (1) control group, treated with the vehicle (histidine buffer); (2) two T-DM1 groups, treated with 20 mg/kg and 60 mg/kg; and (3) three trastuzumab-AJICAP-maytansinoid (4) groups, treated with 20 mg/kg, 60 mg/kg, and 120 mg/kg. Each group consisted of five animals for blood chemistry test as well as five animals for clinical signs and body weight measurements. All rats were administered once through intravenous injection via the caudal vein using a butterfly needle, a 30-mL polypropylene syringe, and a syringe pump (Pump 11 Elite, Harvard Apparatus). The experimental procedures were approved by the institutional ethics committee.

Using a well-established previously described approach [13], a site-specific thiol-modified mAb, the intermediate ADC precursor, was prepared from trastuzumab, which is the same antibody as that in T-DM1 upon completion of a gram-scale synthesis (Fig. 2). The final step in ADC preparation is the conjugation of this thiol intermediate with MCC-maytansinoid (Fig. 2A). This reaction completion was detected by IPC analysis using HIC HPLC, as per a previous good laboratory practice (GLP) material preparation [13]. Purification to remove residual drug linkers was performed in a straightforward manner using tangential flow filtration (TFF), which is a commonly used technique that can be applied to kilogram-scale ADC manufacturing [21, 22]. Compared to MC-VC-MMAE, which was previously used for preparing AJICAP-ADC, TFF could clear MCC-maytansinoid from the ADC composition. This can be attributed to the hydrophobicity difference of each drug linker. MC-VC-MMAE is relatively more hydrophobic than MCC-maytansinoid [23], thus, requiring careful monitoring of its clearance level. The removal rate of highly potent MCC-maytansinoid drug-linker was calculated by the extracted ion chromatogram (EIC) analysis, which showed that the rate was supposed to be near the detection limit in this analysis (data not shown).

Next, a thermal stability study of trastuzumab-AJICAP-maytansinoid was examined to estimate the suitable formulation and storage conditions towards forthcoming manufacturing processes (Fig. 2C). Several previous studies, including ours, had reported stability assessments results of T-DM1 in peer-reviewed literature; and we followed the same procedures for one of the processes applied to trastuzumab-AJICAP-maytansinoid [13, 16, 17, 18].

T-DM1 was found to be relatively stable at lower temperatures (4 °C) [11, 15]. At room temperature or higher, the aggregation percentage increased significantly; however, in the current study, trastuzumab-AJICAP-maytansinoid showed more resistance to high temperature than T-DM1. As described above, T-DM1 has a heterogeneous mixture of possibly more than 80 species [27], some of which may be unstable and prone to aggregation. In contrast, AJICAP-ADC is a low heterogeneous ADC; its conjugation position is known to be stable under thermal/blood circulation. This high stability of trastuzumab-AJICAP-maytansinoid reflects the stable linkage/conjugation site produced by the AJICAP technology. Furthermore, in a previous study, we reported that the minimum effective dose (MED) of both ADCs was 5 mg/kg based on the NCI-N87 xenograft study. Thus, the TI of trastuzumab-AJICAP-maytansinoid was estimated to be qualitatively greater than that of T-DM1, considering their respective MTDs and MEDs (Table 1).

The authors declare no conflict of interest. YM and BAM are serving as the Guest editors of this journal. We declare that YM and BAM had no involvement in the peer review of this article and has no access to information regarding its peer review. Full responsibility for the editorial process for this article was delegated to GP.