Starting with the works of Santiago Ramon y Cajal, the problem of neuroregeneration remains one of the most important in neurobiology with still resonating the prophetic statement of Cajal: “…once development was ended, the founts of growth and regeneration of the axons and dendrites dried up irrevocably. In adult centres the nerve paths are something fixed, ended, immutable. Everything may die, nothing may be regenerated. It is for the science of the future to change, if possible, this harsh decree” [1].

Currently, this remains relevant and is particularly important for spinal cord injury (SCI). The length of axons of the motor neurons in the cortex and brainstem mediating the activity to the motor neurons in the spinal cord, can reach more than 1 meter length. Navigation and growth of brain axons during neuroontogenesis begins after neural tube closure, reaches the lumbar spinal cord during embryogenesis, and continues to grow after birth until adulthood. The molecular mechanisms of the relationship between embryonic development and regeneration in adults was proposed by Thomas Hunt Morgan a century ago [2]. Recent study on the mechanisms underlying embryonic development and the whole-body regeneration in sea anemone demonstrated the redeployment of the embryonic gene network during regeneration [3]. The principles of the neuroontogenesis were effectively employed to stimulate neuroregeneration and treat variety of pathologies. Still, the understanding of the genetic control of human prenatal development is insufficient. Two weeks of human prenatal development with the formation of the primitive streak considered as a critical point for subsequent neurulation and further formation of the nervous system, and scientists, guided by ethical reasons, prohibited from using human embryos by this development time point. Accordingly, the knowledge on genetic control of neuroontogenesis was primary obtained in animal models.

In embryonic neurogenesis proliferation and addressed migration of neural progenitor cell (NPC), axons growth, formation of new connections and neural circuits, is highly cooperated with vasculogenesis executed through the neurotrophic and growth factors produced by vascular and glial cells that regulate NPC behavior and axon guidance. The members of neurotrophins family, glial cell line-derived neurotrophic factors family ligands, neuropoietic cytokines family, vascular endothelial growth factors family, and insulin-like growth factors family have critical role in nervous system development and brain organization. Particularly, recombinant genes involved in the gene networks controlling neurogenesis may have a powerful stimulating effect on regeneration. Optimal delivery of the recombinant therapeutic genes into the injured spinal cord with subsequent effective expression remains the key question for SCI therapy. In vivo (direct) or ex vivo (cell-mediated) gene therapy based on neurotransplantation of stem (NPS, mesenchymal stem cells) or mature somatic cells (olfactory ensheathing cells, Schwann cells) overexpressing recombinant molecules were widely employed in preclinical studies. Originally, cell therapy in CNS disorders aimed to replace the lost neurons and NPC were introduced as perspective cell types, although, direct transplantation of these cells has unpredictable paths of differentiation and risk of tumorigenicity. Considering ethical and immunological concerns related to the stem cells obtained from embryonic or fetus tissue, the induced pluripotent stem cells (iPSCs) generated from mature somatic cells and differentiated into NPC were developed, although the problems with the tumorigenicity was not completely solved [4]. The strategy of in vitro differentiation of iPSC derived NPC into different types of neural or glial cells was proposed as a safe and precise approach for neurotransplantation [5]. Meanwhile, considering that many cells are damaged at the site of the lesion, the question on type of cells and their optimal combination obtained from NPC for transplantation still needs to be addressed. Moreover, the problems of survivability of transplanted cells and their integration with survived cells is largely obscure. Currently, the cellular therapy for SCI is primary focused on bone marrow mononuclear cells, mesenchymal stem cells obtained from different tissues, Schwann cells, olfactory ensheathing cells, etc. The usage of the Schwann cells and olfactory ensheathing cells is based on their ability to navigate interrupted axons through the epicenter of the injury to the preserved tissue in sub-lesion segment of the spinal cord. The easy and safe technique for obtaining the autologous bone marrow mononuclear cells and mesenchymal stem cells and production by these cells of the different growth factors, are the main reasons for implementing them in neurotransplantation after SCI. In parallel with the cell therapy for SCI, the implantation of the biodegraded materials at the injury site was employed to fill the cavities and bridge the parts of the nervous tissue [6]. Biomaterials in the form of hydrogels or organized into conduits and scaffolds expected to provide survival of the transplanted cells, guide regrowth of axons across the injury and facilitate post-traumatic spinal cord remodeling. Combinations of biomaterials with cells, recombinant genes, or gene-cell constructs expected to enhance the potential of each approach and results in synergistic effect [7].

In the adult brain, the regeneration of the neural cells realized via the regrowth and sprouting of their neurites and restoration of synaptic connections, described as a neuroplasticity phenomenon. Neuroplasticity provided by the neurotrophic and growth factors supports cells survival, axonal growth, and formation of new synaptic contacts, accommodating multiple mechanisms, including short- and long-term circuitry and synaptic reorganization. Following SCI, neuroplasticity provides the background for neuroregeneration and opens therapeutic targets for brain remodeling. Neurorehabilitation procedures along with novel bioelectrical and pharmacological approaches aimed to modulate the sensory information, facilitate neuroplasticity, and support functional restoration. Facilitation of the spinal circuitry as the main mechanism of neurorehabilitation promotes plasticity and reorganization through the combination of cellular, molecular, and trophic effects [8, 9, 10]. The complimentary effect of different therapies requires a mechanistic ground-based currently missing in the field. Spinal cord electrical stimulation (SCS) directed to the proprioceptive and cutaneous afferents of the dorsal roots trans-synaptically facilitates spinal circuitry [11], causing changes in other systems like local hemodynamics [12]. The tuning of the sensory system can be achieved with afferents stimulation, rehabilitation, body position [9, 13], and by optimization of the stimulation protocols [14]. The reorganization of the spinal network may lead to pathological consequences, including neuropathic pain, muscle spasticity, and autonomic dysreflexia, related to molecular neuroregenerative mechanisms. The restoration after SCI requires integration of neuroanatomical, molecular, and electrophysiological mechanisms. For example, following the injury reactive gliosis and release of gliotransmitters is influencing the synaptic activity and could lead to acute excitoxicity caused by increased glutamate signaling and development of neuropathic pain. Considering the complicity of the following to SCI changes and recent development of biotechnologies, the angle of view needs to be adjusted to effectively apply relevant mechanisms and new experimental findings.

Currently, there are only limited preclinical findings on potential combination of neuroregenerative and neuromodulatory therapies [15], although, numerous ongoing clinical trials are focusing on spinal cord neuromodulation and on neuroregenerative approaches. Several key questions are still unclear in this direction, i.e. to what extends SCS could potentiate regeneration across the injury, particularly, when facilitated with cell therapies and biomaterials; potential impact of newly regenerated fibers on neuromodulation, and others. This special issue is focusing on studies combining neuroregenerative therapy with other therapeutic modalities such as biomaterials and SCS, and research that addresses the questions on efficacy and safety of the integration of the different therapeutic approaches, like gene-cell therapy and neuromodulation at different phases of SCI (Fig. 1). 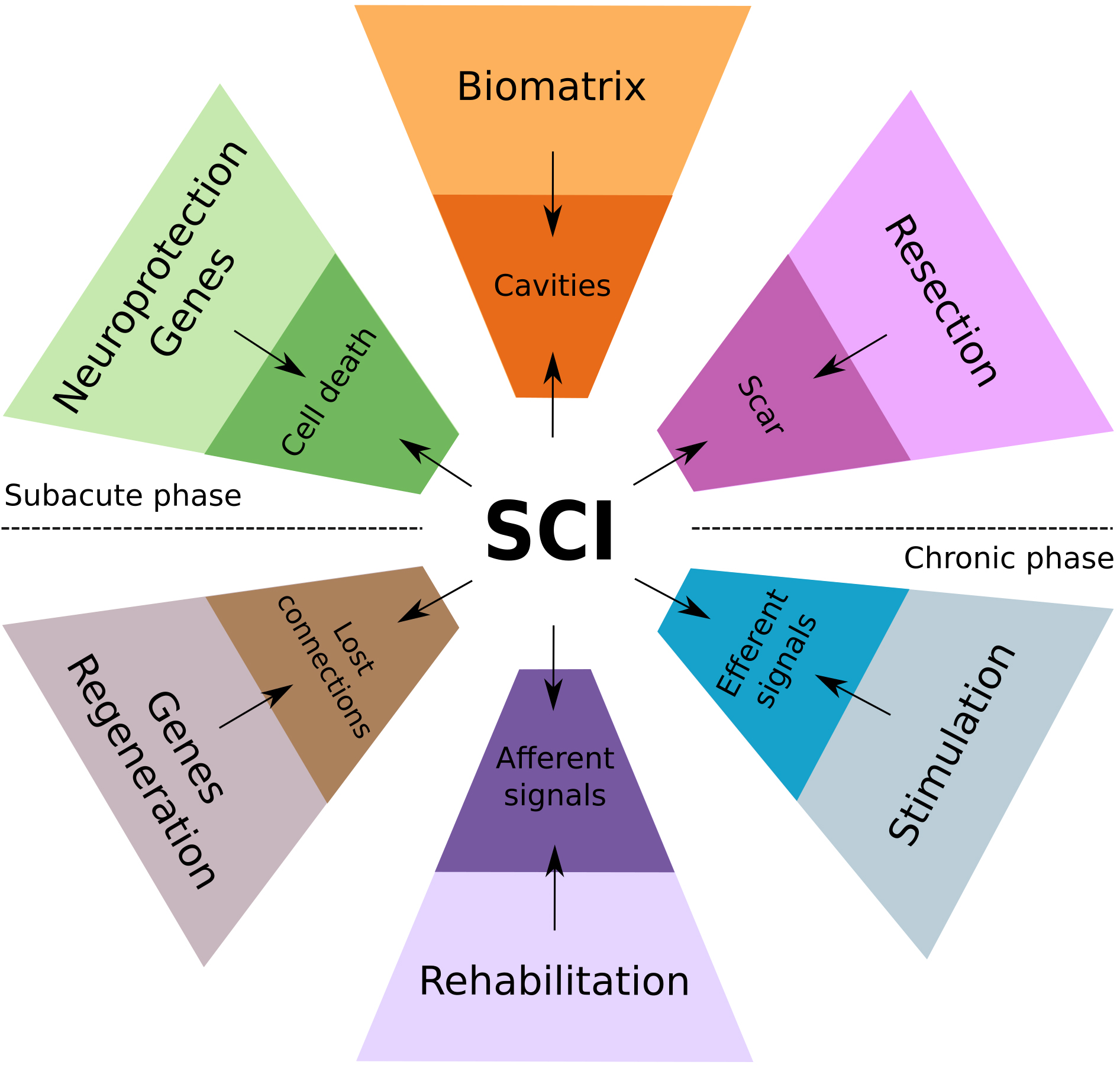 Conceptual diagram of the mechanisms-based combinatorial approach for the therapy of SCI, integrating regenerative, neuromodulation, and rehabilitation therapies.

Proposed contemporary strategies for the therapy of spinal cord injury aimed to overcome consecutive pathogenetic and pathomorphologic events during subacute and chronic phases of SCI. In the acute phase, the massive loss of neural cells and rupture of neuronal circuits and the spinal tracts accompanied with vascular damage (ischemia and hemorrhage, edema) and inflammation. Regression of the acute changes results in the pathomorphological reorganization, including cavitation and scarring around the injury epicenter. The local neuroplasticity enables axon regeneration and neural circuit reorganization in the surrounding spared reactive neural tissue across the mature SCI lesion. In subacute phase of SCI, regenerative therapy aimed to increase spinal cells survivability, facilitate axonal growth, control neuroinflammation and prevent scar formation via delivery of genes encoding neurotrophic factors, anti-inflammatory molecules, and inhibitors of matrix metalloproteinases (top half of the diagram). In addition, resection of scar tissue and cysts along with filling the cavities with the biomaterials providing scaffolding, regenerative therapy (cells grafting and gene delivery) provides a critical basis for rehabilitation and neurostimulation therapies throughout subacute and chronic phases of SCI. During these phases the following approaches can be implemented to further promote axon growth, targeted connectivity, and functional restoration: (1) regenerative therapy based on delivery of genes encoding neurotrophic factors, and agents neutralizing axon growth inhibitors; (2) intensive motor rehabilitation to stimulate afferent information to the circuitry, increase skeletal muscle trophic and strength; and (3) electrical stimulation to modulate local circuitry, facilitate neuroplasticity, and integration of the efferent and afferent signals promoting functional recovery (bottom half of the diagram).

IL and RI wrote the manuscript; Both authors equally contributed to this work.

The authors declare no conflict of interest. IL is serving as the guest editor and the editorial board member of this journal. RI is serving as the guest editor of this journal. We declare that IL and RI had no involvement in the peer review of this article and has no access to information regarding its peer review. Full responsibility for the editorial process for this article was delegated to GP.

Conceptual diagram of the mechanisms-based combinatorial approach for the therapy of SCI, integrating regenerative, neuromodulation, and rehabilitation therapies.