HCC is among the leading causes of cancer death worldwide (1). In recent years, much progress has been made in the diagnosis and therapy of HCC. However, the prognosis and survival rate of HCC patients still remain poor due to lack of diagnostic and therapeutic options. Thus, it is urgent to better understand the molecular mechanisms underlying HCC onset and progression so as to develop new therapeutic applications.

miRNAs are a class of small (~22 nucleotide), non-coding RNAs that participate in gene regulation by inducing degradation of target mRNA or inhibiting translational machinery (2-5). In association with Argonaute proteins, miRNAs form silencing complex to exert suppressive effect on target mRNA through binding its 3’ untranslated region (3’-UTR) (6-8). miRNAs are differentially expressed in various tissues and are closely associated with cellular processes such as proliferation, differentiation, apoptosis, motility and metabolism (3, 9-15). Recent studies reveal that miRNAs regulate initiation and develpment of cancer cells via targeting various tumor suppressors, oncogenes and molecules in signaling pathways (16-20).

Trim59 belongs to the superfamily of the tripartite motif-containing (TRIM) protein (21). Studies have shown that Trim proteins play an essential role in human tumorigenesis and progression (22-25). Trim59, a novel protein in Trim family, has been found to play a significant role in various types of human cancers including lung cancer, gastric cancer, HCC and osteosarcoma (26-29). Sun et al (29) reported that Trim59 is upregulated in HCC cell lines and contributes to growth and metastasis of HCC cells through p53 signaling pathway.

In the present study, we characterized the tumor suppressive effect of miR-4698 –Trim59 axis in HCC, which provides novel insight into the development of new approches for HCC treatment.

Total RNA was isolated using TRIzol reagent (Thermo Fisher, USA). To quantify the levels of Trim59 mRNA, equal amounts of cDNA were synthesized using a High-Capacity cDNA transcription kit (Applied Biosystems, USA) according to the manufacturer’s instructions, and mixed with Power SYBR green PCR master mix (Applied Biosystems, USA). The primers for Trim59 and β-actin used in q-PCR were shown in Table 1. β-actin served as internal control for qPCR. For q-PCR of miR-4698, QScript miRNA cDNA Synthesis Kit (Quanta Biosciences, USA) was utilized based on manufacturer’s instructions. The primers for miR-4698 were obtained from Sigma Aldrich and human small nuclear U6 RNA was amplified and served as internal control.

Table 1 List of the primer sequences used for RT-qPCR
3.5. Transfection

Migration and invasion assays were carried out in 12-mm transwell culture inserts with 8-μm pores (Millipore-Sigma, USA). Hep 3B and Hep G2 cells (4 × 105 cells) suspended in 250 μl of serum free medium supplemented with 0.1% BSA were seeded in the inserts. 700 μl of medium supplemented with 5% FBS was added in the lower culture well. For invasion assay, the inserts were pre-coated with matrigel (Corning, USA) diluted 1:1 in serum-free medium for 3h at 37 °C. Cell suspension was then added in the inserts and cultured for 12 h. Afterwards, the medium in the inserts was removed and the inserts were incubated with 0.5% crystal violet in 25% methanol for 30 min. The cells in the upper side of the transwell culture inserts were removed with a cotton swab. Cells that migrated or invaded were examined and counted under an Olympus CX31 microscope.

4. RESULTS
4.1. The expression of mir-4698 is downregulated in HCC tissues and HCC cell lines 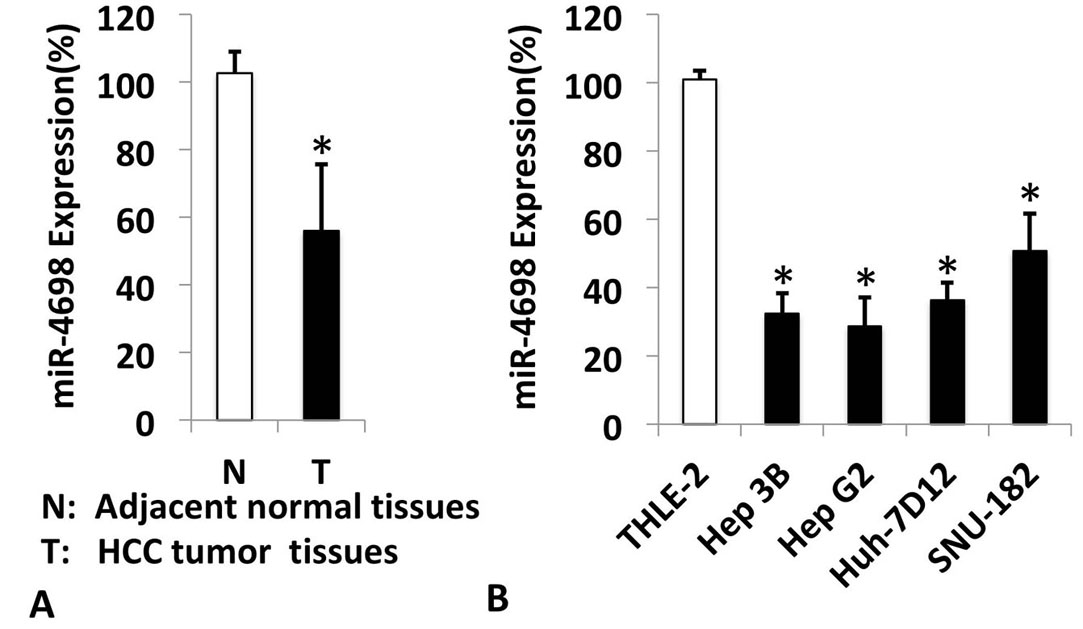 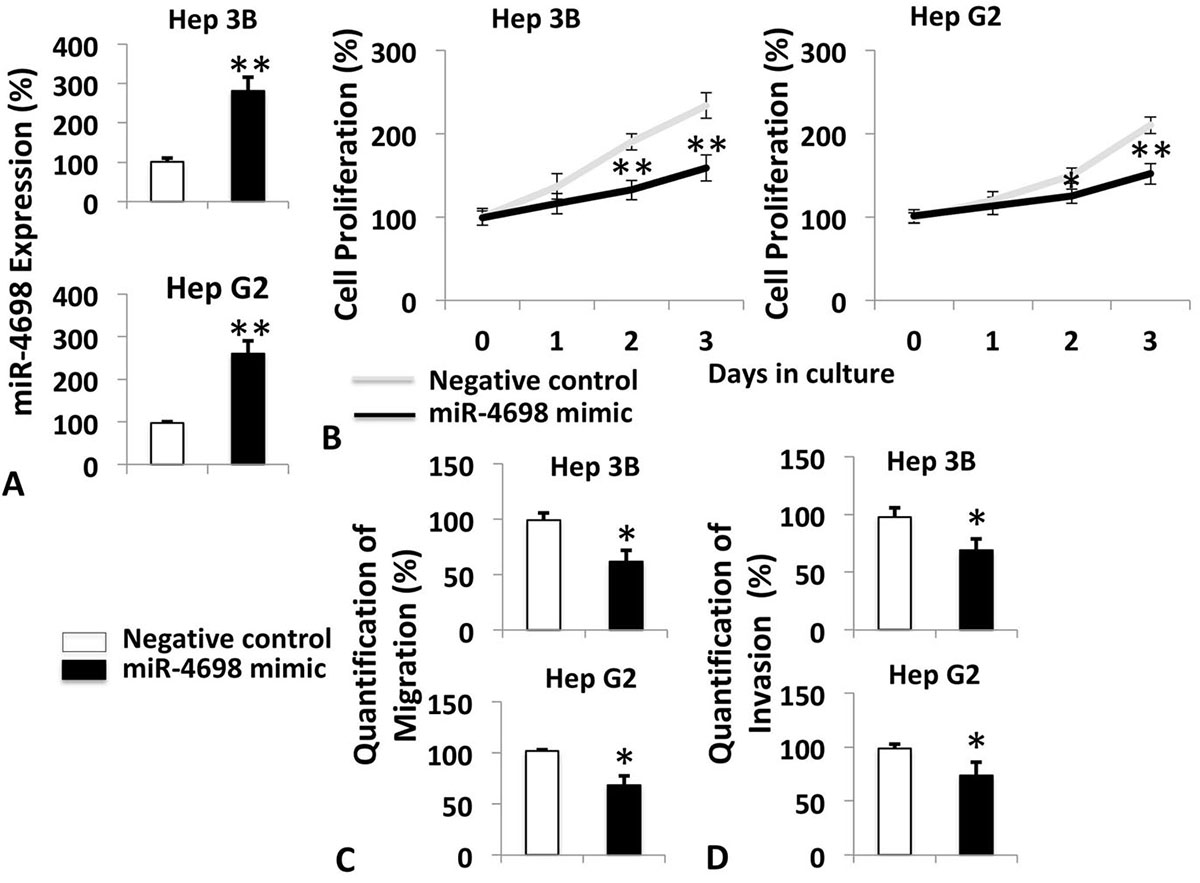 mir-4698 mimic suppressed cell growth, motility and EMT of HCC cell lines. A. Effectiveness of transfection of miR-4698 mimic on its expression in Hep 3B and Hep G2 cells. B. Cell proliferation, migration (C), invasion (D), and the expression of E-cadherin and N-cadherin in Hep 3B and Hep G2 cells transfected with miR-4698 mimic or its negative control. The results were shown as percentage changes in miR-4698 levels, cell proliferation, migration and invasion in comparison to negative control group. Densitometry results represent the ratio of E-cadherin or N-cadherin to β-actin. Data are shown as mean±SD from three independent experiments (*p <0.05 and **p<0.01).

ASOs against miR-4698 were utilized to suppress the basal expression of miR-4698 in Hep 3B and Hep G2 cells. As shown in Figure 3A, ASOs effectively silenced the expression of miR-4698 in both cell lines. Result of CCK8 analysis showed that ASOs significantly enhanced cell proliferation (Figure 3B). Migration and invasion of the cells were also promoted by miR-4698 inhibition (Figure 3C and 3D). These findings show that the low basal levels of miR-4698 still works to restrain the growth and mobility of HCC cells. ASOs against miR-4698 enhanced cell growth and motility of HCC cell lines. A. Analysis of miR-4698 levels in Hep 3B and Hep G2 cells transfected with or without miR-4698 ASOs. B. Cell proliferation, migration (C) and invasion (D) of Hep 3B and HepG2 cells with miR-4698 silenced by its ASOs. The results were shown as percentage changes in miR-4698 levels, cell growth, migration and invasion in comparison to scrambled control group. Data are presented as mean±SD from three independent experiments (*p <0.05 and **p<0.01).

Trim59 was identified as a target of miR-4698 in miRDB database. High levels of Trim59 at mRNA and protein levels were detected in the tumor tissues (Figure 4A and 4B) and HCC cell lines (data not shown) as compared to the levels in matched adjacent normal tissues or normal hepatic cells. Luciferase reporter assays were then utilized to further confirm this result. Transfection of miR-4698 mimic in Hep 3B and Hep G2 cells resulted in a remarkable suppression of luciferase activity of pGL-Trim59-3’-UTR, but not mutant pGL3-Trim59-3’UTR (Figure 4C). Furthermore, miR-4698 overexpression in Hep 3B and Hep G2 cells significantly downregulated the expression of Trim59 mRNA and protein. (Figure 4D). 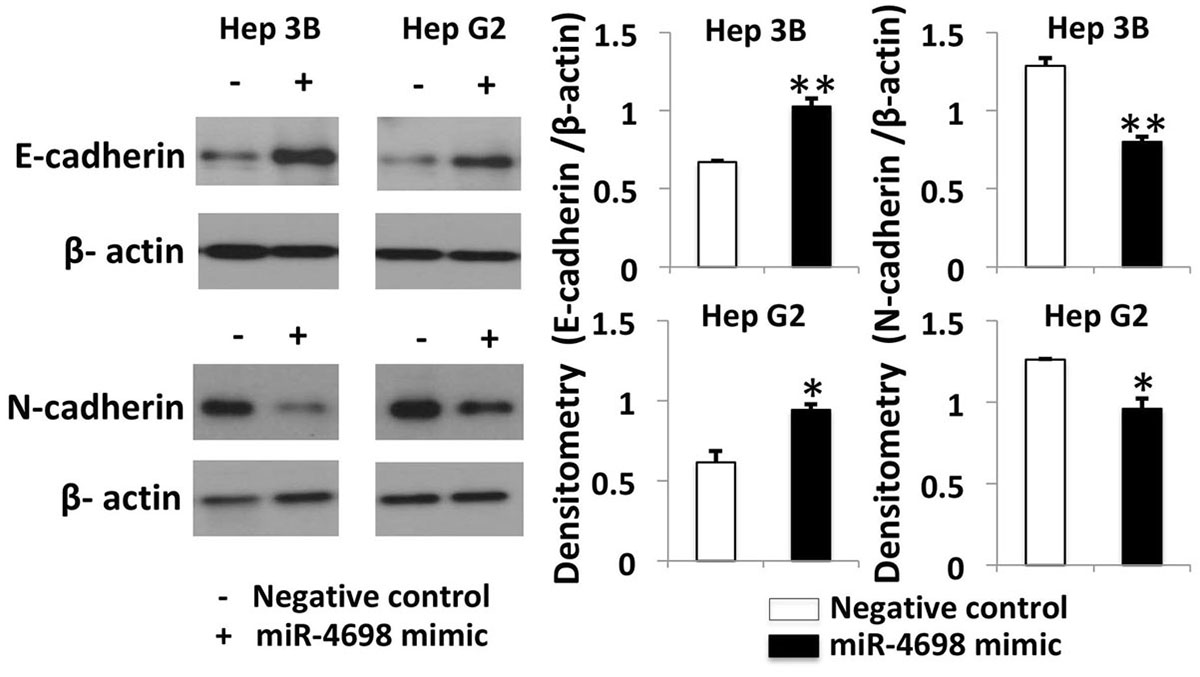 4.5. Inhibitory effects of miR-4698 is mediated by targeting Trim59 in HCC cells

To confirm whether targeting Trim59 mediated the inhibitory effect of miR-4698 in HCC cells, transfection of pcDNA3.1-FL-Trim59 (full-length Trim59, stored in our lab) was performed to overexpress Trim59 in Hep 3B and Hep G2 cells. As shown in Figure 5A, forced Trim-59 overexpressio was confirmed by Westerb blot. Overexpression of Trim59 abrogated the suppressive effect of miR-4698 mimic on cell proliferation (Figure 5B), migration (Figure 5C) and invasion (Figure 5D) in both cell lines. Moreover, forced overexpression of Trim59 by transfection in both cell lines did not alter growth and mobility of the cells without co-transfection with miR4698 mimic, whereas Trim59 siRNA significantly suppressed the proliferation and motility of the cells (data not shown). Thus, these results suggest that miR-4698 plays tumor suppressive role HCC cells by targeting Trim59. 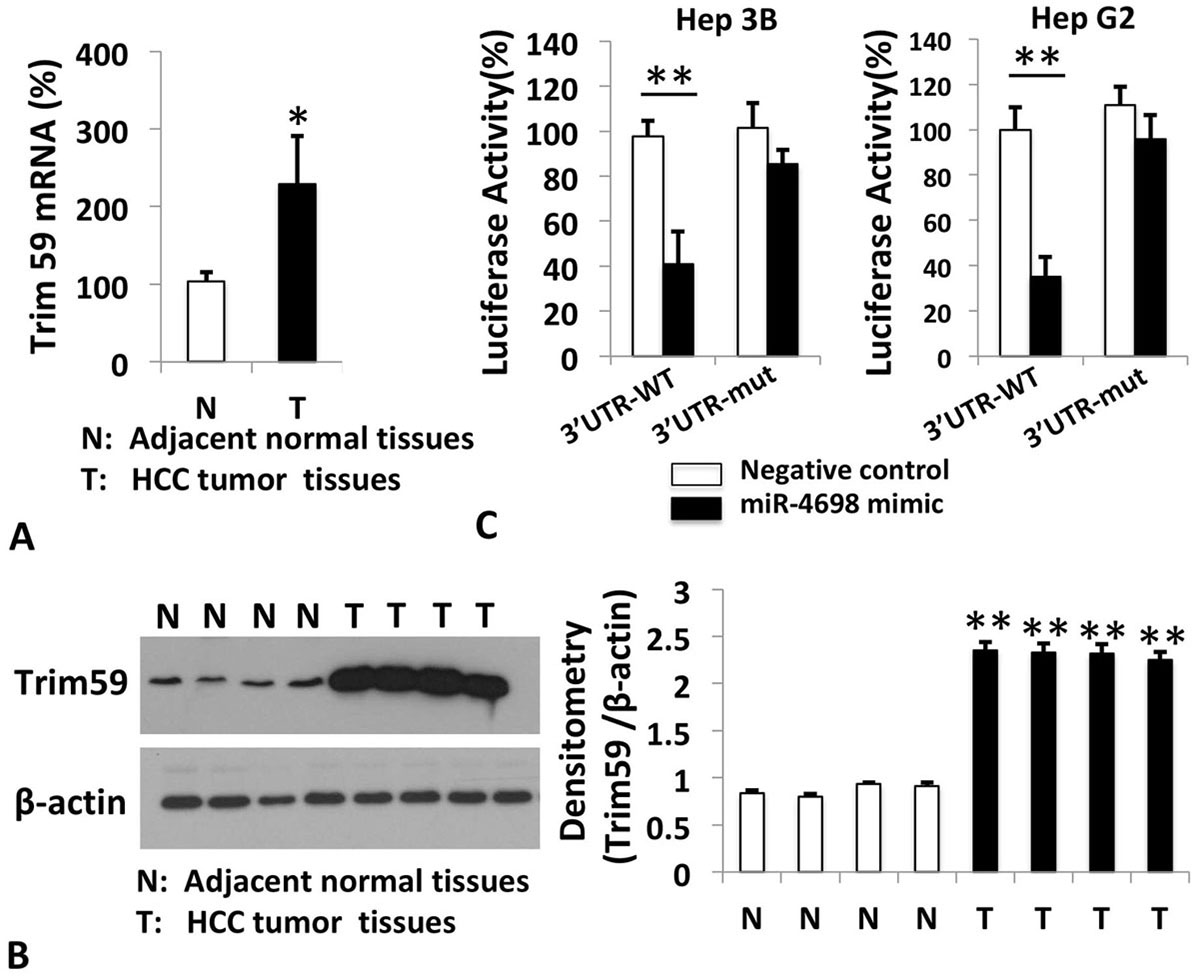 Inhibitory effect of miR-4698 on HCC cells was mediated by suppressing Trim59. A. Confirmation of overexpression of Trim59 in Hep 3B and Hep G2 cells transfected with pcDNA3.1-FL-Trim59. Overexpression of Trim59 abrogated the suppressive effect of miR-4698 mimic on cell proliferation (B), migration (C) and invasion (D) of Hep3B and HepG2 cells. The results were shown as percentage changes in cell proliferation, migration and invasion in HCC cells in comparison to negative control group co-transfected with pcDNA3.1 control plasmid and negative control of miR-4698 mimic. Densitometry results represent the ratio of Trim59 to β-actin. Data are presented as mean±SD from three independent experiments (*p <0.05 and **p<0.01).

It is well known that miRNAs can induce mRNA degradation or suppress translation of target mRNA. In the present study, we identified Trim59 as a target gene of miR-4698. Trim59 is a biomarker of various cancer, and exhibits oncogenic properties. Previous study showed that Trim59 is highly expressed in BEL7402, Hep3B, HepG2, Huh7, SMMC7721 and SK-Hep-1 HCC cell lines (29). In our study, we confirmed this finding in Hep 3B, Hep G2, Huh-7D12 and SNU-182 HCC cells (data not shown). Moreover, HCC tissues showed high levels of Trim59, which was correlated inversely with the levels of miR-4698. So far, the molecular mechanism by which the expression of Trim59 is regulated in HCC still remains undefined. Trim59 was predicted as a target of miR-4698 in miRDB database, which was validated by luciferase assay. Regulation of the expression of Trim59 by miR-4698 in HCC cells may occur at mRNA level in a degradation-dependent manner or by translation silencing. It is likely that the mechanism that Trim59 is upregulated via downregulating miR-4698 is employed by HCC cells in the tumor microenvironment.

Next, we speculated whether the inhibitory effect of miR-4698 on HCC cells was directly mediated by targeting Trim59. As expected, restoration of Trim59 in HCC cells effectively abrogated the inhibitory effect of miR-4698 mimic. It is interesting that in HCC cells with forced overexpression of Trim59 but without co-transfection with miR-4698 mimic, there was no significant increase in the capability of cells to grow, migrate and invade, suggesting that the endogenous expression of Trim59 in HCC cells might reach a relative high or saturation level that could be sufficient for regulating the growth and mobility of the cells. Since Trim59 is a signaling protein of Ras signaling pathway that could mediate tumor angiogenesis (35), downregulation of miR-4698 in HCC cells could also indirectly facilitate the crosstalk between tumor cells and other cells such as endothelial cells in tumor microenvironment. It will also be interesting to investigate the role of miR-4698-Trim59 axis in other pathological processes in HCC cells such as DNA damage, drug resistance, and aberrant metabolism. This study demonstrates a tumor suppressive role for miR-4698-Trim59 axis in HCC (Figure 6). On the basis of our findings, we suggest that miR-4698 acts as a tumor suppressor in HCC cells by targeting Trim59. Thus, manipulation of miR-4698 may represent a potential new strategy for HCC treatment. 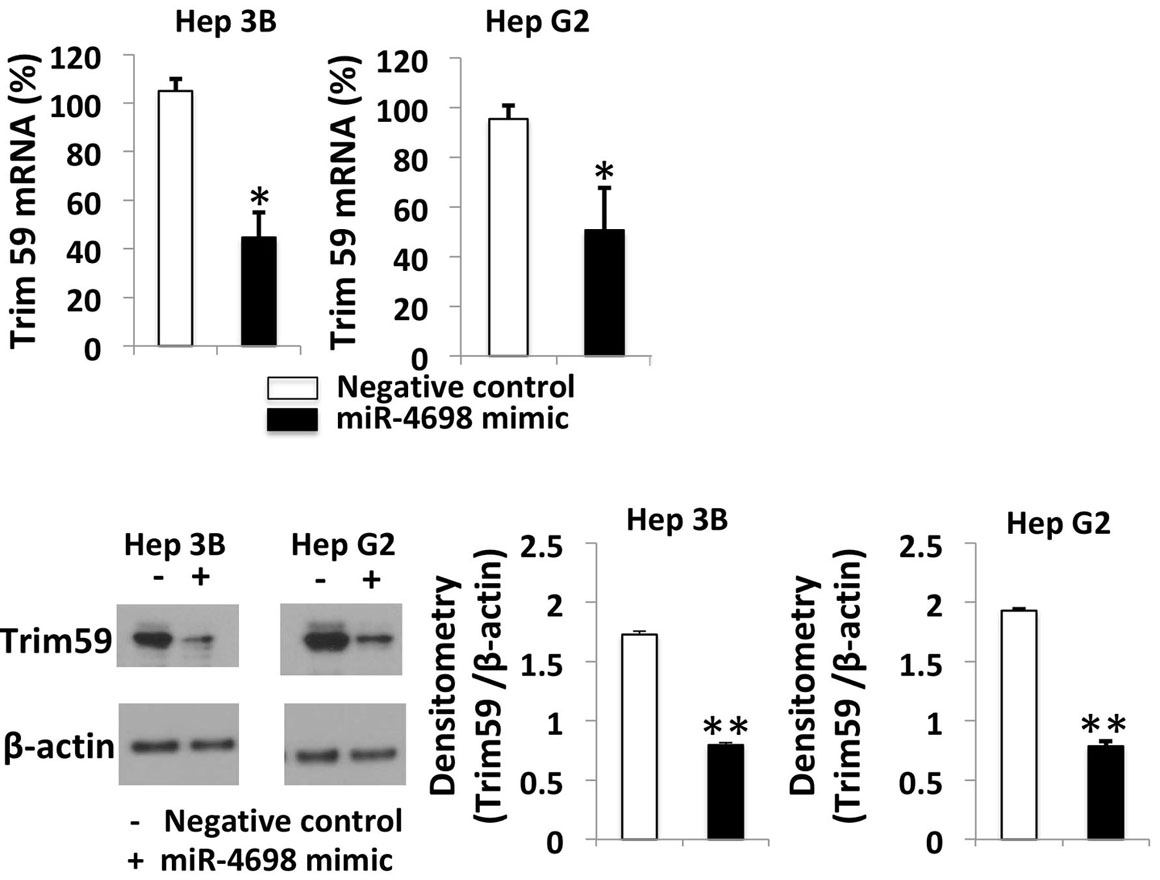