Atherosclerosis affects medium and large-sized arteries and is characterized by focal thickening of the intima of the arteries and deposition of lipid, resulting in narrowing of the arteries. Atherosclerosis leads to cardiovascular diseases [1]. There are numerous factors including hyperlipidemia [2, 3], diabetes [4], hypertension, cigarette smoking [5], obesity [6], hyperhomocysteinemia [7], and elevated serum C-reactive protein [8, 9] which are involved in the development of atherosclerosis. The term hyperlipidemia refers to increased levels of serum total cholesterol (TC), low-density lipoprotein-cholesterol (LDL-C) and triglycerides (TG), or a combination of all the three. A major risk factor for coronary artery disease is hyperlipidemia [3, 10]. CAD (coronary artery disease) risk increases by 2% to 3% for every 1% increase in serum cholesterol [11]. A 10% reduction of serum cholesterol reduces the risk of CAD by half for men of 40 yrs of age and by 25% for men 60 yrs of age over 5 yrs [11]. An increase of 10 mg/dL of LDL-C was associated with a 12% increase in the risk of cardiovascular disease (CVD) [12]. The serum TG levels are strongly associated with CAD [13, 14]. There is a strong inverse correlation of high-density lipoprotein cholesterol (HDL-C) with atherosclerotic CAD. High serum HDL-C levels reduce the rate of atherogenesis [15], while low levels of HDL-C accelerate atherosclerosis [16]. The risk of CAD is increased by 2% to 3% for every 1 mg/dL reduction in the levels of HDL-C [17]. The ratio of TC/HDL-C 3.5 in men and 4.5 in women, while the ratio of LDL-C/ HDL-C 3.5 in men, and 3.0 in women are risk of cardiovascular diseases [18]. Reactive oxygen species (ROS) [19, 20, 21, 22], and advanced glycation end products (AGE) and its cell receptor RAGE (receptor for AGE) and soluble receptor for AGE (sRAGE) [23, 24] have been implicated in the development of atherosclerosis. AGE and its cell receptors, sRAGE and esRAGE (endogenous secretory receptor for AGE) have been implicated in various diseases including non-ST segment elevated myocardial infarction (NSTEMI) [25], restenosis following PCI (percutaneous coronary intervention) [26] and accelerated atherosclerosis with streptozotocin-induced diabetes in apo-E-deficient mice [27]. This paper deals with the mechanism of hypercholesterolemia-induced atherosclerosis, with special reference to ROS and AGE-RAGE axis and C-reactive protein (CRP).

2. Effects of Hypercholesterolemia on Atherogenic Biomolecules 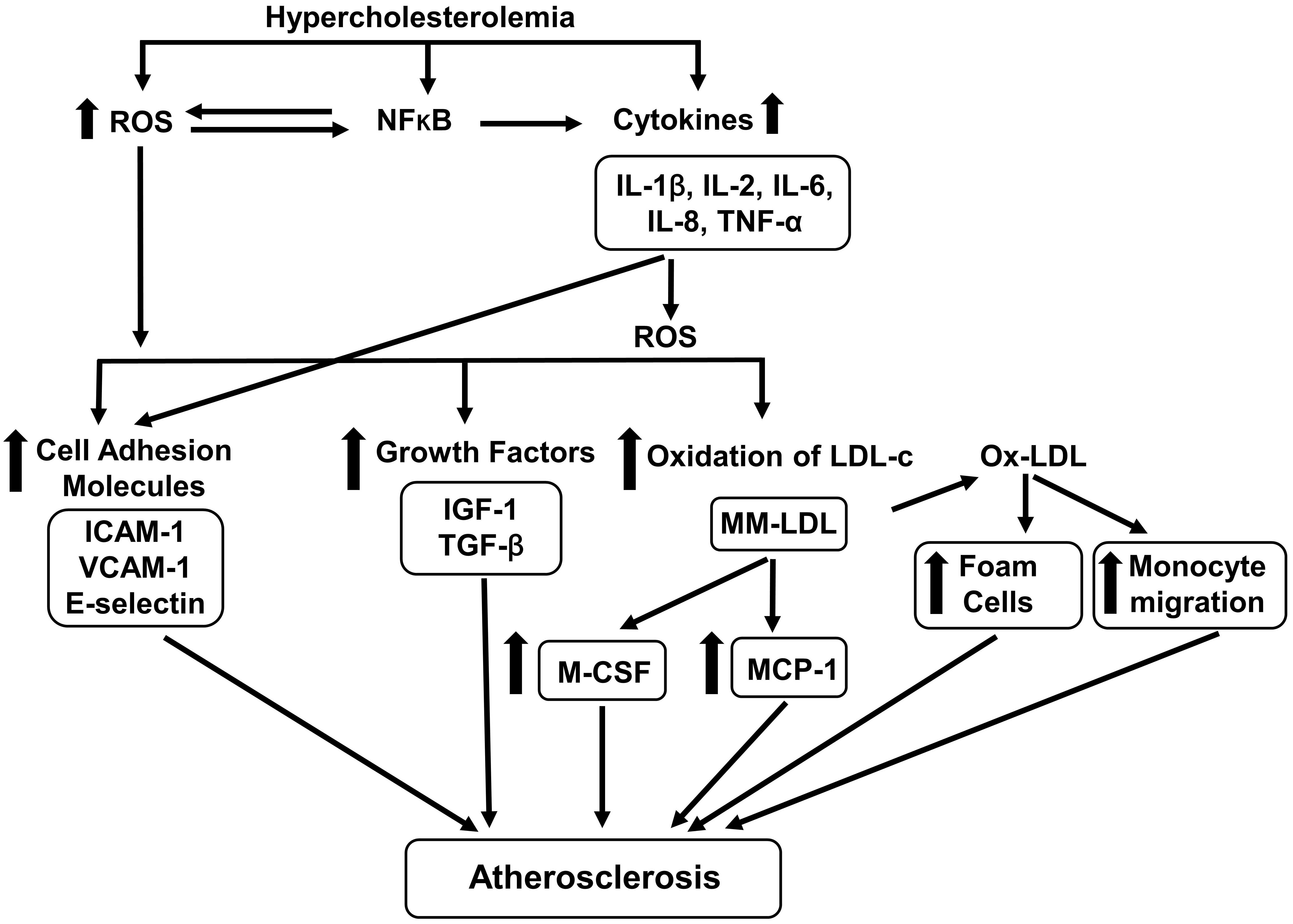 There are various sources of hypercholesterolemia-induced increases in ROS. The content of cholesterol in platelets, polymorphonuclear leucocytes (PMNLs), endothelial cells, smooth muscle cells and monocytes are elevated by hypercholesterolemia [28, 29, 30]. Thrombin, histamine, and adenosine diphosphate (ADP) are released by cholesterol-rich platelets [31, 32]. Phospholipase A is activated by histamine and ADP [33] which act on membrane phospholipids to release arachidonic acid [34]. Increases in the intracellular Ca concentration [35] that occur in hypercholesterolemia [36] would also increase the phospholipase A activity. The formation of arachidonic acid is enhanced by activated phospholipase A and hence an increase in the synthesis of prostaglandins and leukotrienes in various cells. The intermediate steps in the biosynthesis of prostaglandins [37] and leukotrienes [38] from arachidonic acid generate ROS. Leukotriene B4 (LTB4) is formed during the metabolism of arachidonic acid by leukocytes. Hypercholesterolemia activates complements component C3 and C5 (C3a and C5a) [39]. The synthesis and release of platelet-activating factor (PAF) are elevated by hypercholesterolemia [35]. Platelet-activating factor increases the formation and release of interleukin-1 (IL-1) [40], and tumor necrosis factor-alpha (TNF-) [41]. Platelet-activating factor [42], LTB4 [43], C3a and C5a [44], interleukin-1 [45] and TNF- [46] stimulate PMNLs to generate ROS. Hypercholesterolemia accelerates the production of ROS in endothelial cells through activation of nicotinamide adenine dinucleotide phosphate (NADPH)-oxidase [47, 48]. NADPH-oxidase is the most important modulator of ROS in endothelial cells. The serum levels of CRP in insulin-sensitive subjects are elevated by hyperlipidemia [49]. Prasad [8] has reported that CRP increases the generation of ROS from white blood cells.

2.2 Effects of Hypercholesterolemia on Antioxidants

Reduction in antioxidants would also elevate the serum levels of ROS. Superoxide dismutase (SOD), catalase and glutathione peroxidase (GSH-Px) are enzymatic antioxidants. Superoxide dismutase metabolizes superoxide anion to hydrogen peroxide (HO) and oxygen, while catalase metabolizes HO to HO + O. GSH-Px metabolizes HO to water and oxygen. This suggests that the Superoxide anion (oxygen radical) becomes inactive with antioxidant enzymes. Serum levels of SOD and GSH-Px have been reported to be markedly reduced, while catalase activity was elevated in hypercholesterolemic rabbits as compared to control [50]. Vitamin E, an antioxidant, produced an increment in the serum levels SOD and GSH-Px activity without a change in the catalase activity [50]. The activity of aortic SOD, Catalase and GSH-Px were significantly augmented in hypercholesterolemic rabbits [50].

2.3 Role of ROS in the Generation of Biomolecules for Development of Atherosclerosis

ROS have numerous functions in the development of atherosclerosis. It activates nuclear factor-kappa-B (NF-B) [51] which in turn activates pro-inflammatory genes of various cytokines such as, interleukin (IL)-1, IL-2, IL-6, IL-8 and TNF- and interferon- (IFN-) [40, 41]. IL-1 and TNF- stimulate PMNLs to generate ROS [40, 41, 51, 52, 53]. NF-B is a key factor in regulation of NADPH-oxidase expression and function [54]. ROS elevate the expression of intercellular adhesion molecule-1 (ICAM-1) [55, 56] and vascular cell adhesion molecule-1 (VCAM-1) [57, 58] in endothelial cells. Expression of E-selectin in the human endothelial cell is increased with ROS [59]. The expression of cell adhesion molecules (CAM) is elevated by cytokines [60]. Leukocytes adhesion to endothelial cells is the early step in the development of atherosclerosis [61]. ROS are implicated in the growth, proliferation, and differentiation of vascular smooth muscle cells [62, 63, 64]. Insulin-like growth factor-1 (IGF-1) plays a critical role in the growth of vascular smooth muscle cells [65]. ROS increase the formation of IGF-1 in vascular smooth muscle cells and play an important role in the growth of vascular smooth muscle cells [66]. Transforming growth factor (TGF-) modulates vascular development and remodeling by cell differentiation, proliferation, migration and extracellular matrix formation [67]. ROS activate TGF-’s which mediate numerous TGF- fibrogenic effects [68].

Oxidation of LDL-C by ROS has numerous functions in the development of atherosclerosis [68, 69, 70, 71, 72]. LDL-C is mildly oxidized to form minimally modified LDL (MM-LDL) which is further oxidized to form maximally oxidized LDL (OX-LDL). MM-LDL activates smooth muscle cells and endothelial cells to produce monocyte chemoattractant protein-1 (MCP-1) which is involved in the migration of monocytes (leukocytes) from endothelial surface to subendothelial space. Monocytes possess LDL receptors which combine with native LDL, but the amount of native LDL is not enough to form foam cells. MM-LDL stimulates endothelial cells to generate monocyte colony-stimulating factor (MC-SF) which triggers monocyte differentiation into macrophages that develop receptor for OX-LDL. OX-LDL is taken up by differentiated macrophages to form foam cells. An overview on the formation of OX-LDL and its role in the development of atherosclerosis have been reported by Poznyak et al. [73]. Parthasarathy et al. [70] have reported that OX-LDL is present in the circulating blood. LDL oxidation takes place in the vascular wall [73]. Hashimoto et al. [74] have reported that transmigration of monocytes into subendothelial space is assisted by OX-LDL directly through a change in the endothelial junction. Other investigators [75] have reported that OX-LDL assists in the recruitment of monocytes through interaction of platelet with monocytes and endothelial cells. Macrophages are involved in the generation of numerous growth-regulating factors [76]. Plasma LDL has been shown to have a positive correlation with ROS release by mononuclear leucocytes (MNLs) and polymorphonuclear leukocytes (PMNLs) [77].

Triglycerides (TG) enhance the generation of ROS and secretion of TGF- and IL- [78, 79]. Araujo et al. [77] have reported that plasma triglycerides were positively correlated with the release of ROS by MNLs and PMNLs. Triglycerides increase the expression of cytokines (IL-1, IL-6, IL-8, TNF-) [80] and adhesion molecules (ICAM-1, VCAM-1) [81].

HDL-C has antiatherogenic properties. Plasma HDL-C has a negative correlation with ROS release by resting MNLs and PMNLs [77]. It has antioxidant activity [82] and has inhibitory effects on LDL oxidation [83]. HDL-C reduces the expression of MCP-1 [84] and prevents the CRP-induced upregulation of proinflammatory adhesion molecules [85]. 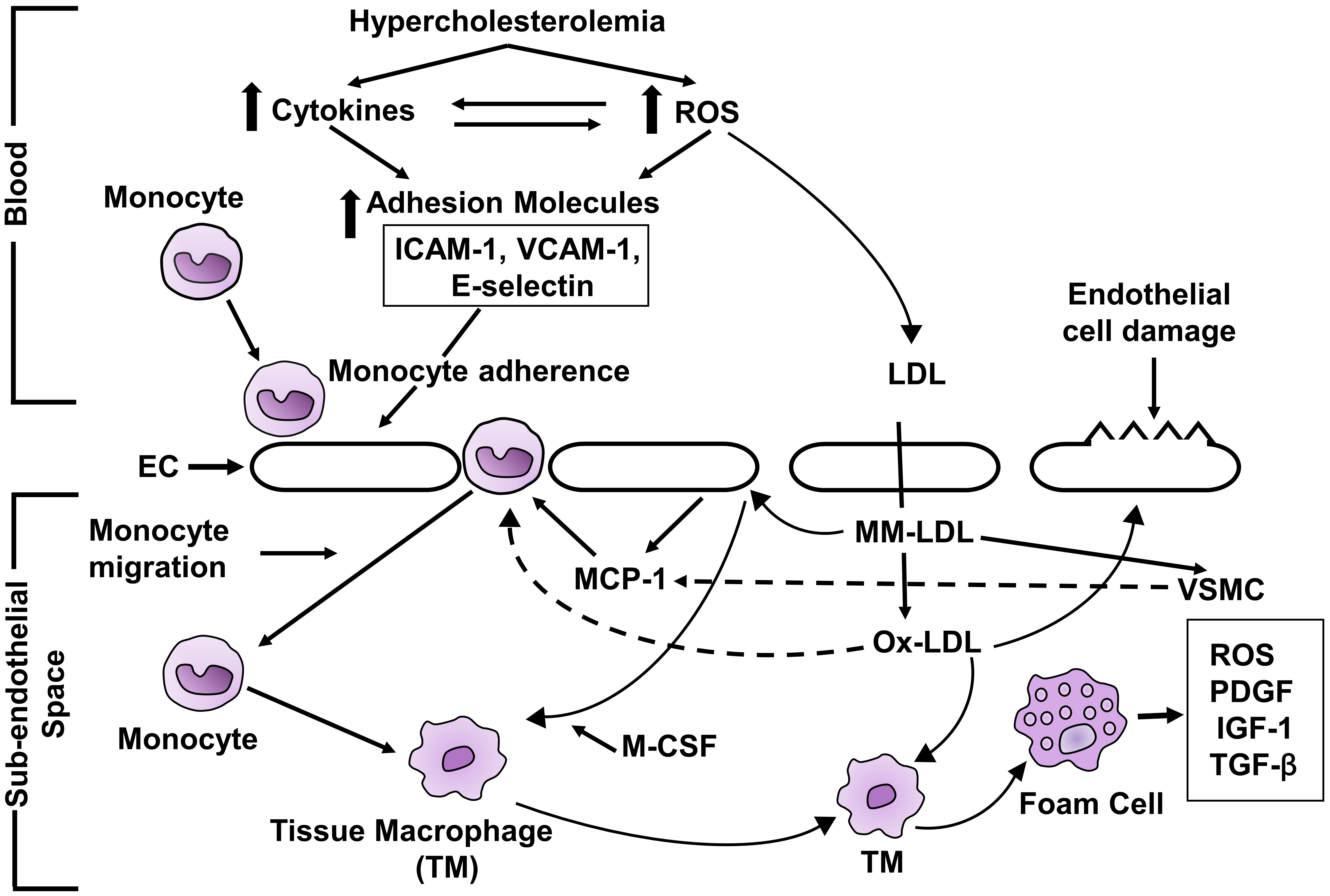 4. Evidence for the Role of Hypercholesterolemia-Induced ROS in the Development of Atherosclerosis

6. Involvement of AGE and Its Receptors in Hypercholesterolemic Atherosclerosis

AGEs are heterogenous groups of irreversible adducts produced from the nonenzymatic interaction of amino groups of protein, lipids, and nucleic acids with reducing sugars such as glucose, fructose, and glyceraldehyde [130, 131]. Receptors for AGE include RAGE, sRAGE, esRAGE, and cRAGE (cleaved RAGE). RAGE is bound to the cell membrane, while sRAGE, esRAGE, and cRAGE circulate in the blood. RAGE has two isoforms, esRAGE and cRAGE. cRAGE is cleaved from RAGE by proteolytic enzymes [132] and esRAGE is produced from alternate mRNA splicing of full-length RAGE [133]. sRAGE contains both cRAGE and esRAGE. sRAGE, esRAGE, and cRAGE lack the cytosolic and transmembrane domain and circulate in the blood. Interaction between AGE with RAGE produces atherogenic biomolecules [23, 134]. The binding of sRAGE, cRAGE and esRAGE with AGE does not activate intracellular signaling and does not produce atherogenic biomolecules. There is a competition between RAGE and sRAGE for binding with AGE [135]. Thus, sRAGE and esRAGE have protective effects against adverse effects of interaction of AGE with RAGE. AGE-RAGE stress, defined as the ratio of AGE/sRAGE has been coined by Prasad and Mishra [136], A high ratio of AGE/sRAGE indicates the presence and progression of atherosclerosis.

The levels of AGE and RAGE were elevated in the wall of the carotid artery of Zucker diabetic rats, and these levels were further elevated in the balloon-injured carotid artery of these rats [140]. These authors also reported that sRAGE administration before and for 21 days post-balloon injury reduced the neointimal hyperplasia in the carotid artery. De-endothelialization of the carotid artery in wild type mice has been shown to elevate the expression of RAGE in injured arteries [141]. They also observed that use of sRAGE reduced neointimal hyperplasia in these mice. Wendt et al. [27] have shown that diabetes-accelerated atherosclerosis in apo-E deficient mice had increased expression of VCAM-1 in the aorta, and that sRAGE administration significantly reduced the atherosclerotic lesion in the aorta. Administration of sRAGE completely suppressed the accelerated and advanced atherosclerosis in apo-E deficient mice [142]. Serum levels of sRAGE were reduced in Non-ST-segment elevated myocardial infarction [25]. Serum levels of sRAGE were reduced in patients with restenosis following percutaneous coronary intervention (PCI) [26]. Low pre-PCI sRAGE levels in serum have been reported to be a predictor of post-PCI restenosis in NSTEMI patients [26]. AGE-RAGE stress has been reported to play a role in the development of coronary artery disease [134, 143] and carotid artery stenosis [144].

7. Role of CRP in Hypercholesterolemic Atherosclerosis

A hypercholesterolemic diet increases the serum levels of CRP [49]. CRP can induce atherosclerosis through the generation of ROS [8, 145, 146] activation of NF-B [147], and increased expression of CAM [148], and MCP-1 [149]. CRP increases the release of MC-SF [150]. CRP has been implicated in the development of CAD, peripheral vascular disease, and post-PCI restenosis [151]. The data suggest that hypercholesterolemia- induced increase in CRP could also be involved in the development of hypercholesterolemic atherosclerosis through generation of numerous atherogenic biomolecules.

The authors declare no conflict of interest. KP is serving as one of the Editorial Board members of this journal. We declare that KP had no involvement in the peer review of this article and has no access to information regarding its peer review. Full responsibility for the editorial process for this article was delegated to Karol E. Watson and Morris Karmazyn.