Glaucoma is a leading cause of blindness globally [1], with neovascular glaucoma (NVG) being one of the most complicated forms of this illness. The primary pathological manifestations of patients with NVG include hyperplasia of intraocular fibrovascular tissue, obstruction of the trabecular meshwork, and peripheral anterior iris adhesion, which could lead to the obstruction of aqueous humor outflow and an increase in intraocular pressure [2] (Fig. 1). NVG can cause deficits in visual function as well as severe pain, both of which will affect quality of life [3]. Clinically, NVG is divided into three stages: Rubeosis, invasion of anterior chamber angle without closure and invasion of anterior chamber angle with closure. NVG is often secondary to diabetic retinopathy (DR), central retinal vein occlusion (CRVO), intravascular inflammation, and tumors [4,2]. The production of vascular endothelial growth factor (VEGF) secondary to retinal ischemia is the most common causes of NVG [5,6]. VEGF [7,8], Ephrin type-A receptor 2 (EphA2) [9], platelet derived growth factor (PDGF) [10], hypoxia-inducible factor- (HIF-) [11], and fibroblast growth factors (FGFs) [12,13] are all considered to be related to the onset of NVG. 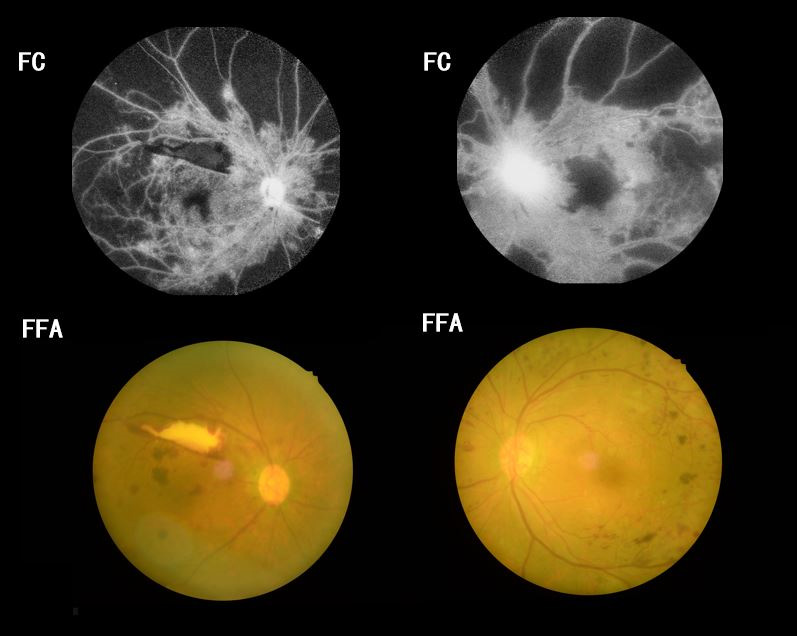 Due to the complex etiology and pathogenesis of NVG, there are no precise indicators or guidelines which apply to the development and outcomes of this disease. Therefore, clinical treatment is complicated, and etiological therapies mainly included the elimination of retinal ischemia by photocoagular, cryotherapy and anti-VEGF therapy. Principles of clinical treatment include treatment of the primary diseases and timely elimination of retinal ischemia to control clinical symptoms. The core strategy of therapy involves reduction of intraocular pressure and retinal ischemic maculopathy, and eliminating neovascularization.

Early studies have shown extensive and complex changes to cortical structure in glaucoma patients, and that these were significantly correlated with progression of the disease [24]. However, there is no grading system or other method for assessing changes in brain morphology in patients with NVG. VBM analysis was applied in the present research to explore whether there is a significant discrepancy of cortical volume between NVG patients and matched healthy controls (HCs), and to look for associations between those changes and the clinical manifestations and pathogenesis of NVG.

The exclusion criteria for this group included: (1) the presence of acute keratitis, acute conjunctivitis or any other ocular inflammation (2) retinal ischemia caused by additional angiopathy (such as carotid stenosis); (3) a history of drugs addiction or alcoholism; (4) any condition contraindicating an MRI scan; (5) mental disorder, including but not limited to depression and bipolar disorder.

Nineteen individuals matched for age, gender and educational level met the above exclusion criteria and had no abnormal brain structure, function or metabolism evident on MRI examination.

The Medical Ethics Committee of the First Affiliated Hospital of Nanchang University (Nanchang, China) gave their approval to the study. The study design was conducted in accordance with the Declaration of Helsinki. Prior to participant signed an informed consent declaration.

To optimize data quality, MRIcro software (Toshiba Inc., Innovista. www.MRIcro.com) was utilized to filter out irrelevant information. Matlab 7.9.0 (R2009b; The Mathsworks Inc., Natick, MA, USA) was used to run the voxel-based morphometry toolbox (VBM8, Wellcome Trust Centre for Neuroimaging, London, UK. http://dbm.neuro.uni-jena.de/vbm8/) within statistical parametric mapping (SPM version 8, Wellcome Trust Centre for Neuroimaging, London, UK. http://www.fil.ion.ucl.ac.uk/spm). VBM8 was set to partition the entire brain into cerebral gray matter, white matter, and cerebrospinal fluid as the default estimation option. Due to individual variability in brain structure, this study used the Diffeomorphic Anatomical Registration through Exponentiated Lie Algebra (DARTEL) method (implemented in VBM8) was being used to normalize images to the Montreal Institute of Neurology (MNI) standardized space, and to create universal templates for gray matter and white matter. The templates were used to standardize the gray matter and white matter of all subjects. To minimize noise in the segmented image and improve the image signal-to-noise ratio and quality, a 6 mm full width half maximum Gaussian kernel was used to smooth the modulation volume. Finally, for analysis, smoothed images were segregated into subject groups.

Brain regions with significant GMV value were identified as regions of interest (ROI) using REST software. The mean GMV of all voxels in each region was considered the GMV value of the ROI. Correlation analysis was used to look for any relationship between abnormal GMV values in the NVG group and their clinical features.

The hospital anxiety and depression scale (HADS), which patients completed and graded, was used to assess the level of anxiety and depression in NVG patients [25]. In the NVG group, the Visual Analogue Score (VAS) was used to assess pain perception. GraphPad prism 7 (GraphPad Software Inc., San Diego, CA, USA) was the tool we used to diagnose the relationship between HADS, VAS and GMV values, respectively.

p values of less than 0.05 were deemed significant in all statistical analyses.

Table 2.Demographics and behavioral results of all participants.
3.2 VBM differences between groups

Table 3.GMV discrepancies between the NVG group and the HCs in several brain areas. 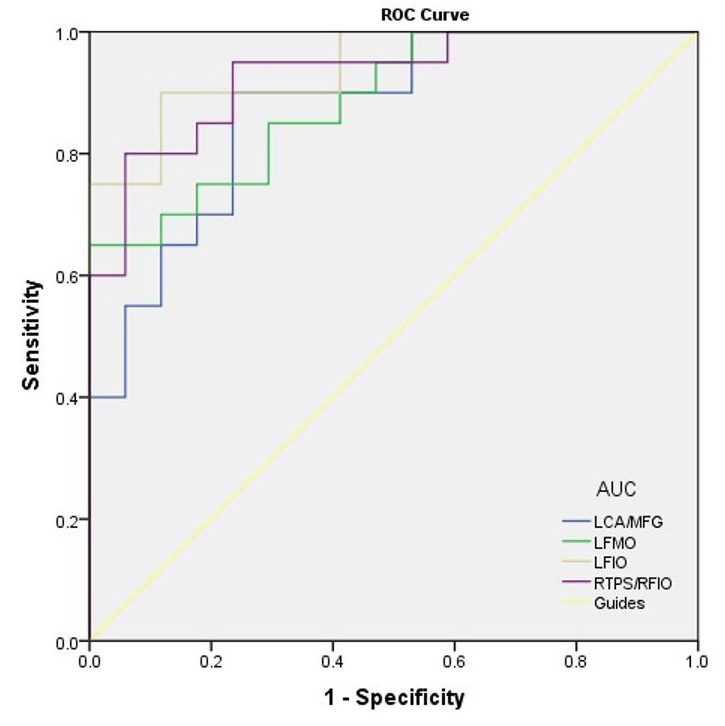 This is the first study of using VBM to assess gray matter volume abnormalities in NVG patients. VBM has, however, been widely used in research on both neurological and ophthalmological diseases, and has shown clear advantages in the exploration of the pathological mechanism of these diseases.

The cingulate gyrus occupies a crucial position in the limbic system [30] and exerts an important role in emotional control and pain management. According to current studies, the anterior cingulate gyrus is involved in not only the regulation of heart rate or blood pressure, and other autonomic nerve activities [31]. But it’s also implicated in a variety of sophisticated body and visceral motor processes, as well as pain responses, attention maintenance [32], decision-making processes [33], and pain management [34]. Previous studies have demonstrated that the anterior cingulate gyrus cortex of the right dorsal horn may be related to visual cognition and emotion [35]. Results of the present study indicate decreased gray matter volume of anterior cingulate gyrus in NVG patients. This result suggesting that NVG patients may have dysfunction in visual cognitive function [22].

The frontal gyrus is an important component of the dorsal visual pathway [36]. It is concerned with recognition and judgement based on spatial information about objects and simultaneously plays an important role in optic nerve positioning, multi-retina correspondence, and the formation of scotoma of the fixation point [37]. The frontal gyrus includes superior, medial and inferior frontal gyrus, and abnormalities of its structure or function have been investigated in many ophthalmic diseases, including but not limited to diabetic retinopathy [38], strabismus with amblyopia [39], corneal ulcer [40] and ophthalmectomy [14]. In this study, we found that VBM results indicated significant GMV reduction in all of these regions (medial, superior, and inferior frontal gyrus), which are the same as Wang et al. [41] and it may be related to increased intraocular pressure (IOP).

The decrease in GMV volume in the superior and inferior frontal gyrus in the present study agrees with the results of other existing studies [21,48], supporting the finding of damaged cortical visual pathways in NVG patients. These results collectively suggest that NVG patients may have abnormalities in eye movement, cognitive function and visual processing ability.

Notably, some of the studies also mentioned that beta-amyloid accumulation may be associated with altered GMV in NVG patients [52], which happens to be a typical pathological change in Alzheimer’s patients. There is still a plenty of room to be investigated.

The present study has the following limitations: (1) The participants included in this study may be insufficient. However, selection followed precise inclusion and exclusion criteria, and the differences between potentially confounding factors were not statistically significant; (2) The study samples are all derived from hospital outpatient data, which risks selection bias; (3) Due to equipment and technical limitations, the spatial resolution of imaging may not be optimal.

In summary, NVG patients show decreased GMV values in certain brain areas, the dysfunction of those brain areas may be related to the appearance of corresponding symptom in NVG patients such as the depression and anxiety.

All research methods were approved by the committee of the medical ethics of the First Affiliated Hospital of Nanchang University (2015016) and were in accordance with the 1964 Helsinki declaration and its later amendments or comparable ethical standards. All subjects were explained the purpose, method, potential risks and signed an informed consent form.