Pheochromocytomas are rare neuroendocrine tumors with metabolic activity. They arise from the chromaffin cells primarily located in the adrenal glands, and their reported incidence ranges from 0.2 to 0.9 per 100,000 per year [1,2].

According to their endocrine activity, the most reported clinical presentation is palpitations, paroxysmal hypertension, and tachycardia.

This consists of the secretion of catecholamines, such as norepinephrine and epinephrine, producing vasoactive effects on blood vessels. Therefore, elevated urinary levels of vanillylmandelic acid (236 g/24 hrs) and metanephrine (30,000 g/ng creatinine) are commonly found in these patients.

The 5-year survival rate of benign pheochromocytoma is reported to be between 84% and 96%, while in malignant forms, it is as low as 40% [3,4]. Common metastatic sites include the liver, lungs, and bones, while the spine is considered an uncommon localization.

Spinal metastases from pheochromocytoma (MPS) may represent clinical and surgical challenges since they affect the segmental biomechanical stability and influence endocrine homeostasis. Biomechanical complications may consist of bone erosion or vertebral fractures, spinal deformity, neurological impairment, and back pain. On the other hand, the endocrine activity can cause hemodynamic instability or paroxysmal hypertension, which is reported in up to 90% of these patients. Other symptoms may include pallor, flushing, weight loss, weakness, fever, chest or abdominal pain, anxiety and psychiatric disorders; fatal complications such as myocardial infarction, arrhythmia, and stroke may occur as the result of severe hemodynamic instability in cases of high catecholamine concentration [1,2].

Because of these peculiar features, MPS should be differentiated by other metastatic tumors. However, according to the relative rarity of the disease, pheochromocytoma is still not included as a separate entity in the current oncological staging protocols. Therefore, there are no dedicated scales or scores for prognosis estimation or treatment selection to be preferred in these cases.

The optimal management of MPS consists of the surgical resection of the spinal lesions, the correction of spinal deformity, the decompression of the neural structures, and the medical control of the endocrine and cardiovascular disorders.

Different surgical strategies have been reported, such as open surgery with “en bloc” resection, vertebroplasty, embolization, or simple biopsy, which can also be combined with adjuvant chemo-radiotherapeutic treatments; however, clinical-radiological outcomes of these treatments have been not adequately investigated or compared yet.

We have performed a systematic review on surgical treatments for spinal metastasis from pheochromocytomas, aiming to collect the proposed surgical approaches and techniques and compare their clinical-radiological outcomes.

We performed a systematic review of the literature, according to the PRISMA statement guidelines.

From the first literature research, we retrieved 32 articles. After duplicates removal and titles/abstract screening, 17 papers were considered for eligibility. Two papers were then excluded with reasons: other reviews (1), unclear outcomes (1). Finally, 15 studies (44 patients) matched the inclusion criteria and were included in the present review (Fig. 1). 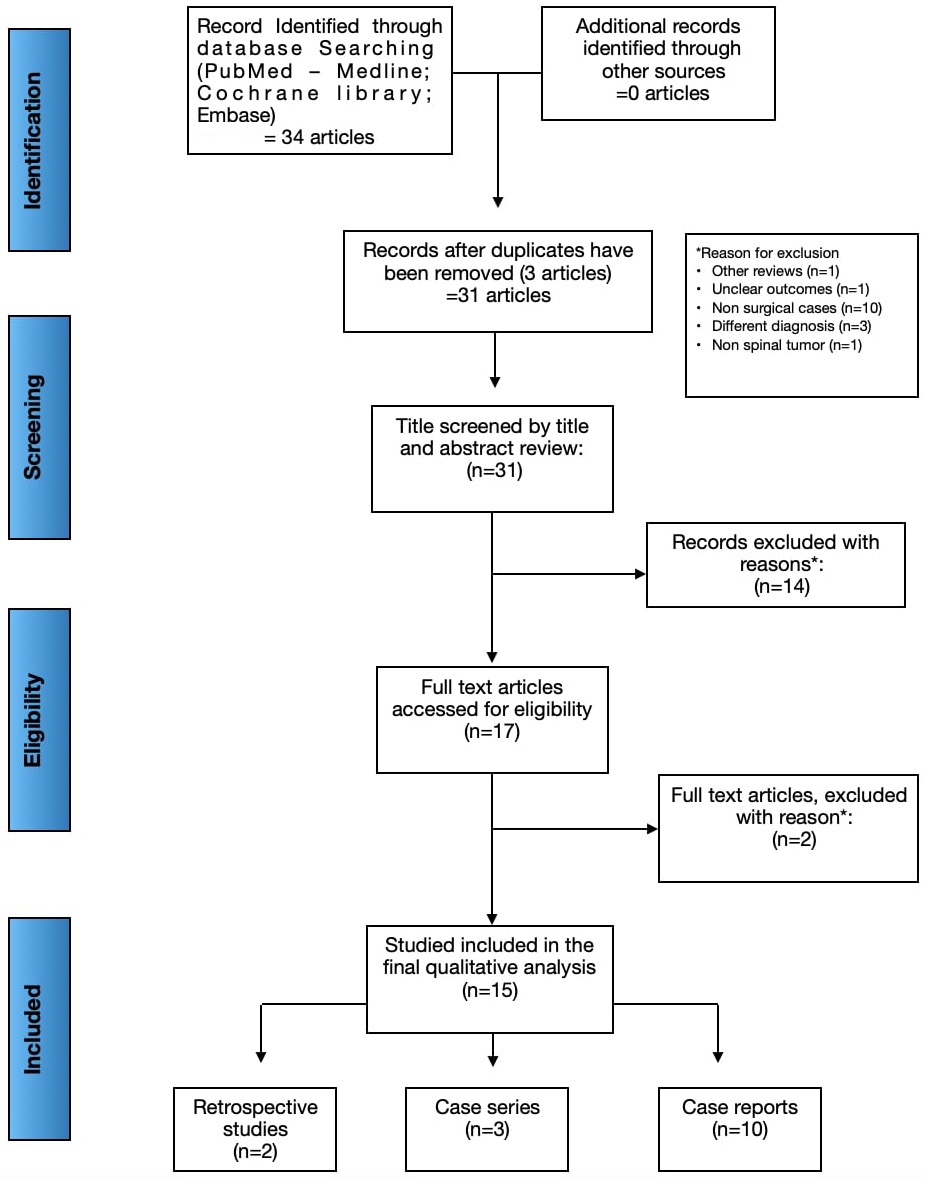 Literature search process following PRISMA criteria. During the identification process based on title and abstract reading from Pubmed-Medline-Cochrane library—Embase databases, we retrieved 32 articles and removed three duplications. An accurate search of all manuscripts finally selected 15 papers for the literature search process.

The primary tumor was located in the adrenal glands in 35 cases and in mediastinum in 5 cases. In the heart, carotid and sacrum, respectively in 1 case each, the primary site was lacking in one patient.

In 38 patients, the surgical resection of the primary pheochromocytoma was performed before diagnosing spinal metastasis.

The most frequently reported symptom was back pain (20 patients, 42%), while cardiovascular symptoms, consisting of refractory hypertension, palpitations and tremor, were reported in 13 (29%) cases. Radicular pain was reported in 3 (6%) cases, a progressive motor deficit in 14 (31%), while sensory disturbances in 3 cases (7%). In two cases (4.5%), bladder dysfunction was reported as the primary symptom.

Diagnostic workup includes traditional imaging modalities and dosage of blood and urine concentration of epinephrine, norepinephrine and vanyllilmandelic acid. While CT scan and/or MRI was performed in all cases, the dosage of epinephrine and its metabolites was reported in two cases (4.5%) only. Bone scans (including FDG, PET, and CT scans) were performed in 30 cases (68%). Needle biopsy leading to histological diagnosis was performed in 19 cases (43%). In six cases (13%), the description of diagnostic workup was unclear, but the history of previously resected adrenal pheochromocytoma was the major clue leading to the final diagnosis.

In 30 out of the 44 patients (68%), preoperative medications were reported: alpha blockers were administered in 26 cases and in all the reported cases, phenoxybenzamine was used at a dosage ranging from 10 to 45 mg daily; in four cases (14%) a combination of alpha and beta-blockers was reported; in three cases no drugs were administered, and in the remaining 11 cases (25%) data regarding preoperative medications were not reported.

Postoperative complications occurred in 10 patients (23%): hypotension and tachycardia were reported in 4 cases (9%), cardiac tamponade in 1 case, a pleural tear in 1 case (2%), and pulmonary edema in 1 case (2%). Two patients experienced transitory neurological worsening after the surgical resection of the spinal lesion. Two cases (4%) of cerebrospinal fluid leakage were documented, and one case (2%) of superficial wound infection was also recorded.

The standard posterior approach was performed in 30 patients (81%), while a combined anterior-posterior approach in 7 (19%). In these cases, MPSs were located in the thoracic spine in 4 cases, in the lumbar spine in 2, and in the cervical spine in 1.

In patients who underwent total gross removal of the MPS and instrumentation, 16 out of 25 (64%) showed stable disease with no progression at the final follow up, 4 cases (16%) showed progression of the disease, and 3 patients (12%) died during follow up. In the remaining 5 patients (20%), it was not possible to retrieve data regarding disease progression. Nineteen patients out of the total 44 (43%) underwent biopsy, surgical decompression, and augmentation: 3 of them showed stable disease (15%), 6 showed progression (32%), and 3 died during the follow-up; in the remaining 10 cases, data regarding outcome were not available.

Treating patients suffering from spinal metastases represents one of the most common, challenging clinical issues that clinicians and spine surgeons have to deal with.

Metastatic spinal pheochromocytomas are a relatively rare diagnosis, and they may represent clinical and surgical challenges for clinicians and spine surgeons. MPS endocrine activity may determine hemodynamic instability, and spinal stability can be severely affected.Therefore, surgery primarily aims to decompress the neurological structures, restores spinal stability, and obtain tissue specimens for histological diagnosis.

The management of MPS and paragangliomas is not included in the most adopted classification systems, such as the revised version of Tokuhashi and Tomita’s one [20,21]; therefore, there is a lack of reliable tools for evaluating their prognosis. Accordingly, we designed the present systematic review to guide clinicians in choosing the medical-surgical treatment.

Our results show that MPS occur more frequently in adults (mean age 42.4 years), while they are rare in the first three decades. The most involved spinal segment is the thoracic one (54%), followed by the lumbar (23%), the cervical (12%), and the sacrum (10%).

Clinical presentation of MPS comprises endocrine and systemic disturbances, such as refractory or paroxysmal hypertension, headache, palpitations, fatigue, flushing, and sweating. Neurological symptoms are due to the loss of spinal stability and the compression of the neural structures.

Due to the extremely low incidence of MPS, there is no consensus on their preferred treatment. In addition, spinal metastases may occur at the primary diagnosis or up to 85 months later than [5,6]. Therefore, a long-term follow-up should be observed in these patients.

MPS does not present pathognomonic features on CT scans, MRIs, and PET-CT. Therefore, radiological imaging maybe not effective in distinguishing these lesions from other metastases. In addition, a description of the diagnostic workup was missing in the majority of the reported series. However, several authors [6-14] considered the previous history of resected adrenal pheochromocytoma as a sufficient criterion to diagnose MPS.

In other cases, the dosage of catecholamines and their metabolites from blood and urinary samples have been helpful for differential diagnosis [8-12]. Needle biopsies are also proposed as a safe and valuable diagnostic tool [6,7], although risks of bleeding and tumor spreading should be considered. Accordingly, we believe that the need for biopsy might be avoided in the case of previous pheochromocytoma surgery or high level of catecholamine or their catabolites in blood or urinary samples.

In preoperative management, adrenergic receptor blockers should be used to control blood pressure and heart rate. The goal of blood pressure control is below 140/90 mmHg to ensure hemodynamic stability and to reduce the risk of perioperative complications [10]. In most reported series, phenoxybenzamine (10 to 45 mg per day) has been used [5-10]. Unfortunately, due to the non-homogeneity of the patients’ sample sizes and surgical procedures, it was not possible to compare the status of the patients receiving preoperative adrenergic blockers with those in where these were not administered. Nevertheless, endocrinologist consultation should be carefully considered for these patients, and the use of adrenergic receptor blockers has been shown as advisable in refractory hypertension.

Therefore, preoperative embolization appears to be safe, and it should be considered when tumor resection and spinal instrumentation are planned to minimize intraoperative blood loss while improving hemodynamic stability.

Both minimally invasive procedures were reported, such as vertebroplasty, and open surgeries, such as decompressive laminectomies or multiple vertebral resection and reconstruction. Seven out of the 13 cases treated with radical resection and reconstruction achieved adequate disease control with no radiological progression at the final follow-up. On the other hand, progression was always reported after minimally invasive treatments. Kaloostian et al. [5] published the most extensive series on MPS management with radical surgical resection. They highlighted that even if a satisfactory control of the disease can be achieved with gross total resection, severe complications may occur intra- and post-operatively [5].

Total excision and reconstruction appear as promising approaches in well-selected patients. Most cases achieved reasonable control of the disease, and progression has been reported only in 2 cases. It has been postulated that mechanical stimulation and manipulation during resection can cause sudden catecholamine release, eventually influencing hemodynamics. Accordingly, en bloc resection of the vertebral body should be preferred to piecemeal removal.

The optimal treatment should be tailored to single patient characteristics, such as the functional status, number and localization of metastasis, and symptoms. For example, surgical resection can be achieved in single metastases, while laminectomy or tumor debulking should be considered in patients with multiple metastases or a poor oncological prognosis. Vertebral instrumentation may be required to preserve the segmental stability. Tumor mass debulking and segmental stabilization can alleviate neurological symptoms, prevent the development of secondary spinal deformities, and determine some grade of relief from mechanical and neuropathic pain. On the other hand, minimally invasive treatments, such as vertebral augmentation and percutaneous biopsy, seem to be effective for the symptomatic treatments of MPS, especially in the case of systemic disease.

Data on MPS are non-homogeneously reported, and the level of evidence of the available clinical reports is generally low. Preoperative embolization appears as a safe procedure, and it should be considered to reduce the intraoperative blood loss in gross total resections. Alpha blockade is generally recommended, especially in patients with refractory hypertension. Minimally invasive palliative treatments should be reserved for multi-metastatic patients or in case of poor prognosis, while radical resection has to be preferred in properly selected cases. Further clinical investigation is recommended, properly focusing on recurrence rates and clinical-radiological outcomes after the different available surgical treatments.

JV, LM and AS designed the research, JV and LM have collected the data, FC, LC and GL have analyzed the data, PBD and AS critically revised the manuscript.

Since the manuscript is a systematic review of the literature and does not involve human participants, specifical ethical approval and informed consent are not required.

We thank Francesco Cultrera for his assistance.

Literature search process following PRISMA criteria. During the identification process based on title and abstract reading from Pubmed-Medline-Cochrane library—Embase databases, we retrieved 32 articles and removed three duplications. An accurate search of all manuscripts finally selected 15 papers for the literature search process.