The function of glial cell reuse of glutamate via the glutamate/glutamine cycle (Lebon et al., 2002) is particularly related to the primary etiology of mood disorders (Kugaya and Sanacora, 2005). Moreover, glial cell inactivity can result in elevated glutamatergic activation and neural toxicity (Soriano and Hardingham, 2007). Decreased neurogenesis in the hippocampus is considered as a mechanism linked to the pathophysiology of depression (Kim et al., 2007; Santarelli et al., 2003). In particular, a reduction in glial cell number and density is reported by several post-mortem reports (Cotter et al., 2001; Ongur et al., 1998; Rajkowska et al., 1999).

Chronic stress changes hippocampal synaptic plasticity (Pavlides et al., 2002). The NMDA receptor is one of three ionotropic receptors that mediate synaptic plasticity, and it contains six regulatory subunits. Among the subunits, NR2A and NR2B have been the most extensively studied due to their broad expression in the brain (Yashiro and Philpot, 2008). NR2B tends to promote neuronal death (Kohr, 2006), while NR2A is conducive to neuroprotection (Liu et al., 2007). Notably, over-activated extrasynaptic NR2B induces glutamate excitotoxicity and has strong calcium permeability once it is bound by excessive glutamate (Zhang et al., 2013). Calcium influx via NMDA receptors is required for the initiation of synaptic plasticity (Marsden, 2013). It activates calcium/calmodulin-dependent protein kinase Ⅱ (CaMKⅡ) (Byrne et al., 2009; Deutschenbaur et al., 2016; Pepke et al., 2010). The quantity of activated CaMKⅡ is proportional to the total amount of calcium (Li et al., 2012).

The apparatus was an 80 cm × 80 cm × 40 cm square iron box placed in a soundproof room. The floor was painted black and separated by white lines into 25 equal squares (each 16 cm × 16 cm). Each rat was placed at the center, then left to freely move for five minutes. The number of line crossings and times of rearing was recorded by a camera. The box was sterilized with 70% ethanol before testing the next rat.

A fast of 24 hours was implemented before the test phase. On the test day, each rat was individually relocated to a plexiglass open field box (76.5 cm × 76.5 cm × 40 cm) that contained a small pallet of food placed at the center. Each rat was put with the same orientation in the same corner of the box. The latency to eating, identified as the rat sitting on its haunches and biting food held with its forepaws, was recorded within the six-minute observation period.

Each rat was trained (adaptation phase) to consume sucrose solution (1% w/v) for three days. No food and water were provided for 24 hours before the test day. On the test day, two bottles were placed in each rat cage: one contained normal drinking water (200 g), the other a 1% sucrose solution (200 g). After 24 hours, the volume of each solution consumed was recorded. The percentage of sucrose consumption = (sucrose consumption in g/total fluid consumption in g) × 100%.

2.6 Glutamate in the hippocampus

Rats were deeply anesthetized with sodium pentobarbital (40 mg/kg, intraperitoneal injection) and decapitated. The hippocampus was removed on ice, weighed, and homogenized in methyl alcohol/water (v/v = 50 : 50), then centrifuged at 3000 rpm for 30 minutes at -4 ℃, and the resulting supernatant was analyzed. Quantification of glutamate was performed by high-performance liquid chromatography (Agilent Technologies, USA) with fluorescence detection on a Hypersil ODS column (Dalian Elite Analytical Instruments, China) ( C18, 4.6 mm × 250 mm, 5 μm). The mobile phase included Mobile Phase A (0.05 mmol/L sodium acetate buffer, pH 6) and Mobile Phase B (acetonitrile/water, V/V = 50 : 50). The column temperature was kept at 28 °C, and pump flow rate was maintained at 1.0 mL/minute.

Statistical Product and Service Solutions (SPSS) 24.0 was adopted for data analysis. Results are given as mean±standard error of the mean (SEM). Data normality was assessed by the Kolmogorov-Smirnov test. Differences in HPLC, Western blot and immunofluorescence analysis between the groups were compared by one-way analysis of variance (ANOVA) with the least significant difference (LSD). For the homogeneity analysis, the F test was employed to evaluate the equality of variances in t-test and Levene’s test of equality of error variances for ANOVA. For statistical analyses of the behavioral tests within each group, a paired t-test was employed. A P-value < 0.05 was considered statistical significance. The content of glutamate in each group. Values are presented as mean±SEM; n = 5 for each group; One-way ANOVA. **P < 0.01 compared to control. The glutamate concentration increased remarkably in the other three groups compared to the control group. 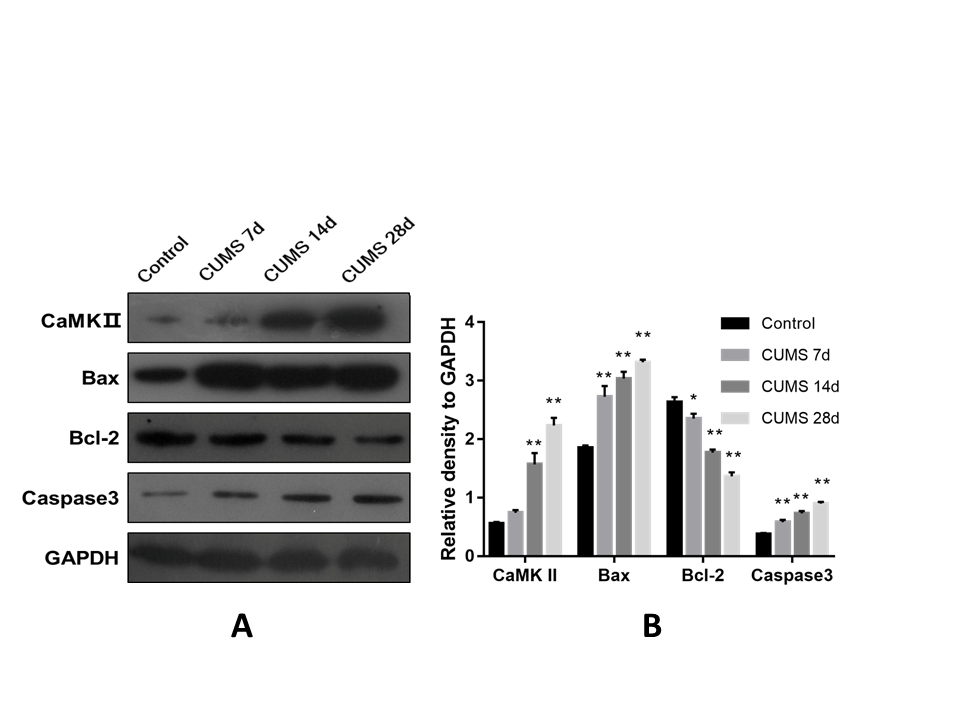 Up-regulated levels of Bax and caspase 3 and down-regulated levels of Bcl-2 were demonstrated within the duration of the model, which indicated apoptosis in the hippocampus. The result of NeuN and GFAP staining showed significant neuronal and astrocytic loss to subsequently exist in the hippocampus. Although recent work suggests chronic stress may result in depression by impairing astrocytes, the underlying mechanisms remain unclear.