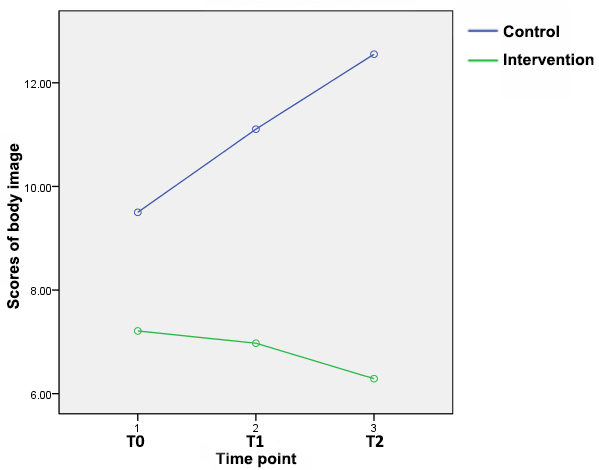 Scores of body image between the two groups. The horizontal axis signified the time point of assessment: T0 signified before discharge from the hospital; T1 signified prior to the end of the middle chemotherapy cycle; T2 signified at the end of the chemotherapy cycle. The vertical axis signified the scores of body image (BI) in the two groups. The blue line and the green line meant the longitudinal variation trend of BI respectively. The BI (T0) in the control group and intervention group were 9.50 6.45 and 7.21 5.50 (mean SD) respectively. The statistical analysis showed there was no significant difference between them. In the control group: from T0 to T1, BI increased, and from T1 to T2, BI decreased a little. In the intervention group: from T0 to T2, BI decreased all the time. There were significant differences in BI between the two groups from T0 to T2.