This review aimed at comparing the midterm outcomes between perventricular device closure (PDC) and CSR in the treatment of VSD.

This study was conducted according to PRISMA (preferred reporting items for systematic reviews and meta-analyses) guidelines [13].

Two investigators independently reviewed all search records, and no disagreements emerged. Specific inclusion criteria were: (1) direct comparative studies of PDC and CSR; (2) isolated congenital VSD in surgical patients (Patient selection criteria: (i) congenital VSD (ii) aortic valve prolapse but no more than mild regurgitation of the aortic valve was present, (iii) no more than moderate regurgitation of the atrioventricular valve was present and (iv) no other malformations which needed repair except for a patent foramen ovale (5 mm)); (3) the following data were involved in the articles: surgical success rate (with or without reason for surgical failure), length of intensive care unit (ICU) and hospital stay, post-operative (within 30 days) complications (including residual shunts, arrhythmia, transfusion and other complications such as death); (4) mean follow-up six months; and (5) required data including residual shunts, conduction blocks, valvular regurgitation during follow-up. Exclusion criteria were duplicate publications, study sample 30 patients, and ambiguous end-point measures.

The quality assessment of included studies was performed using the Newcastle Ottawa scale (NOS) [14]. According to the NOS, each study was judged on three broad perspectives: the selection of the study group; the comparability of the groups; and the ascertainment outcome of interest. According to the NOS, a study can be awarded a maximum of one star for each numbered item in the Selection and Outcome categories. A maximum of two stars can be given for Comparability.

There are various methods of performing PDC in different centers. We introduced a general approach, which is mentioned in much of the literature and has also achieved good results. PDC was performed under general anesthesia, tracheal intubation and TEE guidance. Before the procedure, TEE was used to re-evaluate the position, shape and size of the VSD and adjacent structures, especially its relationship with the aortic valve, to help select the appropriate device and delivery system. A small incision was made at the lower sternum, subxiphoid or left intercostal space. A small portion of the pericardium was incised to expose the free wall of the right ventricle. The bag was then sutured and then inserted into the conveying sheath; the occlude was then positioned and released in the appropriate position. TEE was used in all cases during the entire procedure to guide and check the device position, to evaluate tricuspid and aortic valve insufficiency and leaflet motion, and to detect residual shunts (Fig. 1A,B,C). The selection of the occluder should be individualized according to the specific anatomy of each patient. The location, size, morphology of the VSD, thickness of the interventricular septum at the corresponding site, and relationship of the defect to surrounding vital structures need to be considered (Fig. 1D,E,F). Conventional surgical repair was conducted through a median sternotomy approach under CPB. Review Manager 5.4 software (Cochrane Collaboration, Copenhagen, Denmark), developed by Cochrane Collaboration, was used for statistical analysis. Pooled risk ratio (RR) was reported as 95% CI, and p 0.05 was considered statistically significant. The Cochran’s Q test and I test were performed to judge the heterogeneity of these studies in the meta-analysis. Heterogeneity was considered significant at p 0.1 for the Q statistic. I values less than 50% indicated low heterogeneity, values between 50% and 75% indicated moderate heterogeneity, and I greater than 75% was considered high heterogeneity. The fixed-effects model analyzed the results without significant heterogeneity, and the random-effects model analyzed the results with significant heterogeneity. Sensitivity analysis was performed by successively excluding low-quality studies to evaluate the stability of the results. Potential publication bias was evaluated by constructing a funnel plot. The plot was estimated visually, and the asymmetric funnel plot suggested possible publication bias.

The literature search yielded 5457 published articles. Further screening and exclusion reduced these to 15 articles (including 4381 patients) which were used for the statistical analysis [15, 16, 17, 18, 19, 20, 21, 22, 23, 24, 25, 26, 27, 28, 29]. Among them, three papers [23, 26, 28] were 3-arm studies comparing the efficacy of transcatheter closure, perventricular closure, and surgery, and the rest were direct comparisons. Of the 15 studies evaluated, most were observational and retrospective in design, and only one study [25] was a randomized controlled trial. The PRISMA flow diagram with the description of the study selection process is presented in Fig. 2. 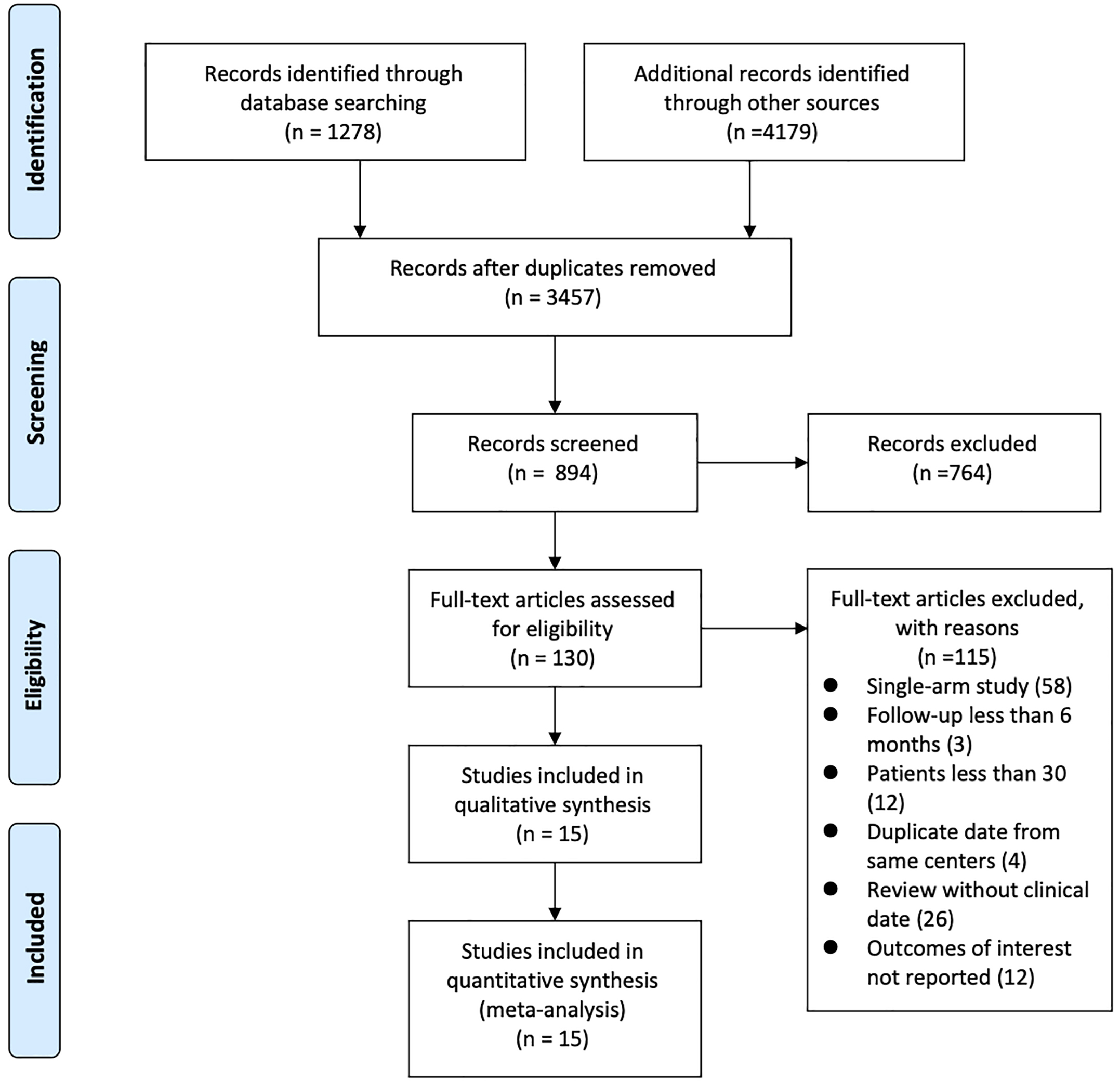 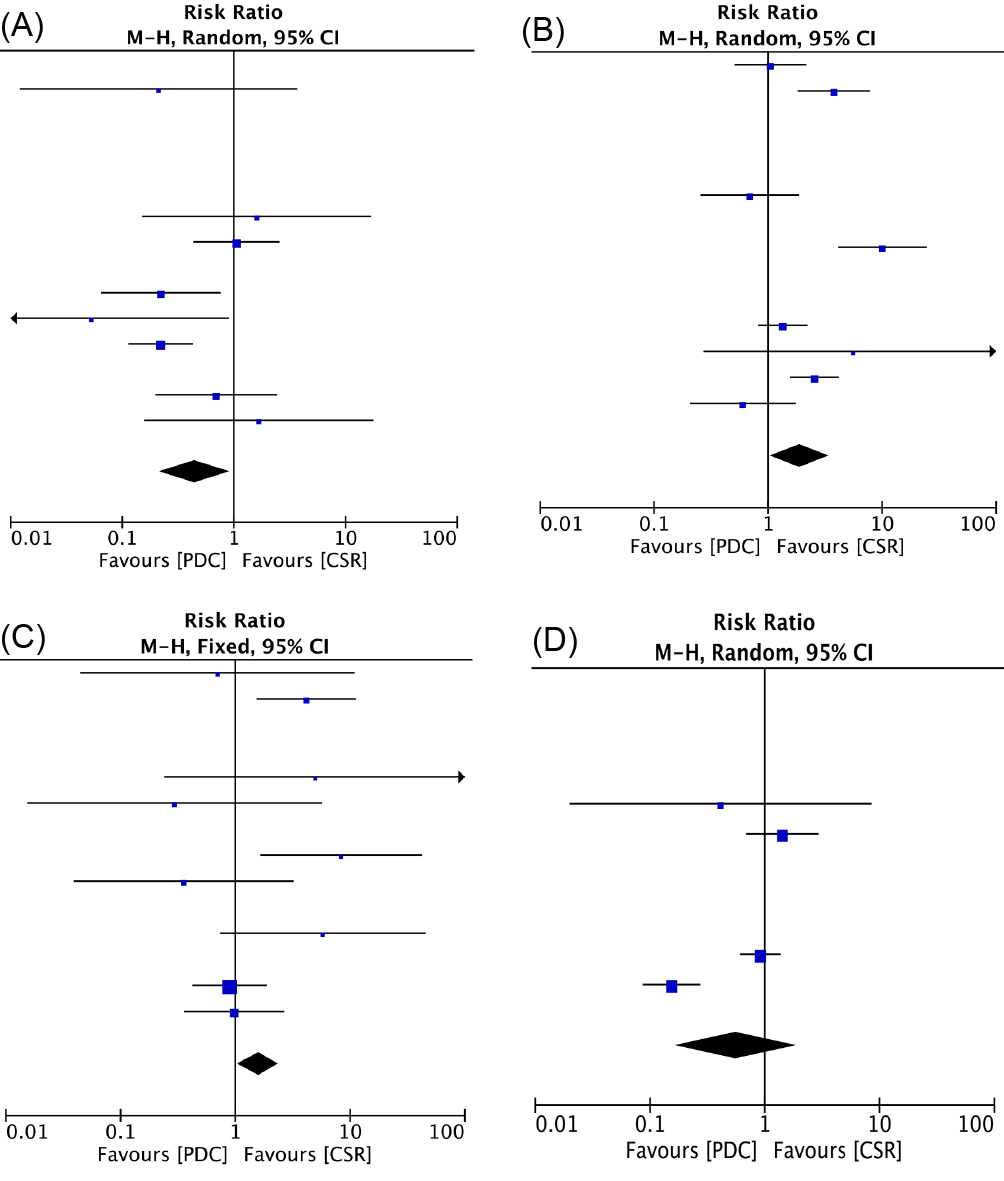 The details regarding quality assessment and risk of bias were shown in Table 2 (Ref. [15, 16, 17, 18, 19, 20, 21, 22, 23, 24, 25, 26, 27, 28, 29]). Although the research quality of studies differed from one another, a lack of randomization and double-blind remained major obstacles. After excluding each individual study, the sensitivity analysis did not show any difference between the two groups. Fig. 5 showed the funnel plot of aortic regurgitation, without publication bias. Fig. 6 showed the sensitivity analysis of aortic regurgitation. 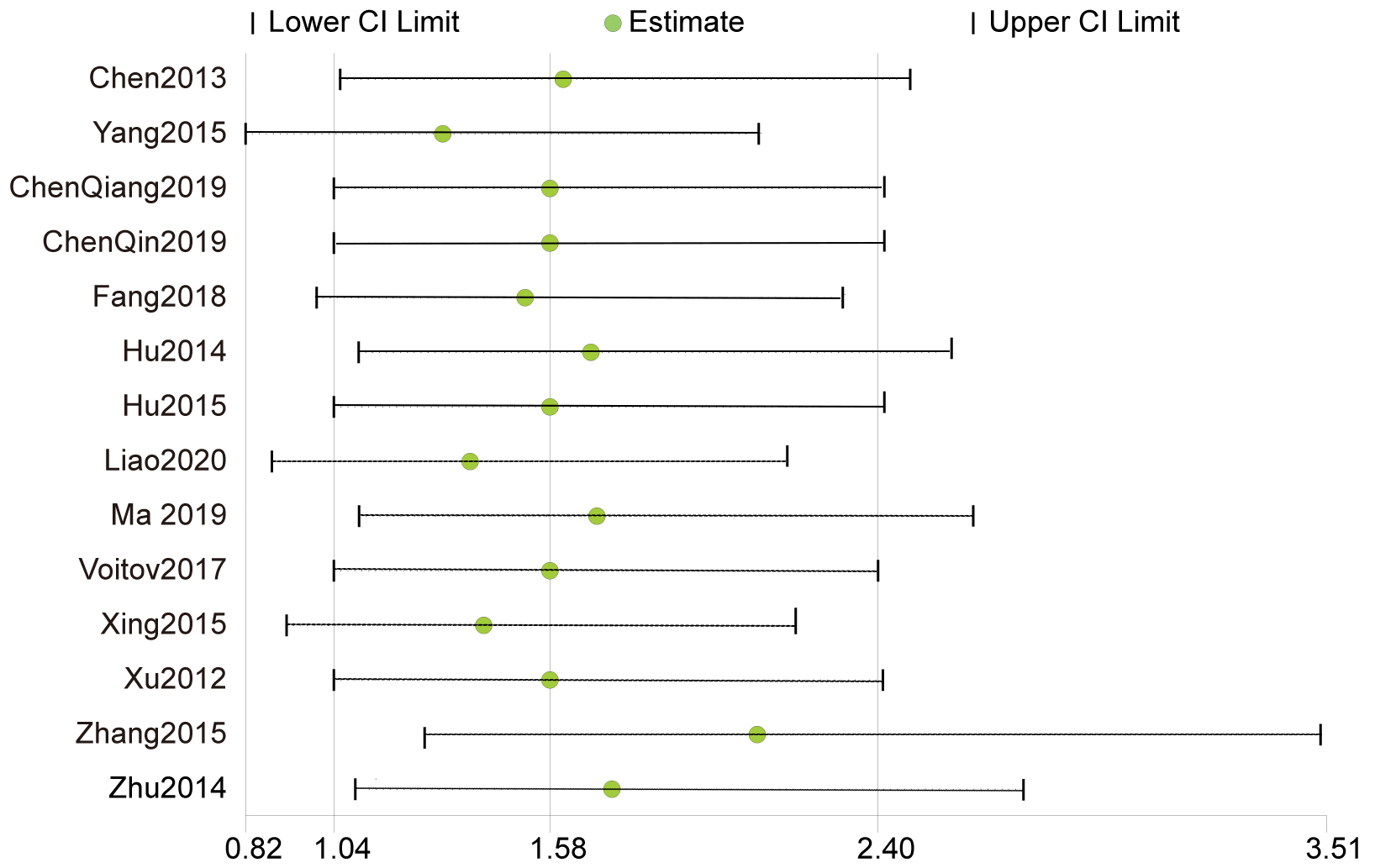 The main findings of our meta-analysis are: (1) PDC is safe, and is associated with a shorter hospital stay compared to CSR; (2) PDC is comparable to CSR in terms of major and minor complications; and (3) PDC was superior in terms of the incidence of residual shunts, but was associated with a higher risk of AR during midterm follow-up.

More than 95% procedure success rates were achieved in the PDC group, but was slightly lower than that of the CSR group. Liu et al. [12] also reported comparable success rates in their study. An additional open surgical procedure was required in the PDC group due to recurrent aortic regurgitation, significant residual shunts, and a high degree of atrioventricular block.

There was no significant difference in the rates of major or minor complications between the two groups at discharge. Liu et al. [12] reported no difference between PDC and CSR in terms of residual shunts, complete AVB, RBBB, valvular regurgitation, incision infection, and pericardial effusion. Voitov et al. [25] also reported similar results. Zhou et al. [30] performed a meta-analysis of PDC versus CSR. There was no difference between the two methods in terms of residual shunts and valve insufficiency, but the risk of arrhythmia was lower in PDC [30]. Liu et al. [12] reported the incidence of postoperative lung injury is higher in CSR, while PDC is superior in the recovery of postoperative respiratory function.

Few meta-analyses have focused on midterm outcome. Residual shunts, valvular regurgitation, and conduction blocks after follow-up greater than 6 months were analyzed in this study.

Late atrioventricular block is also a concern in ventricular septal defect closure, however late complete atrioventricular block (CAVB) and conduction block beyond degree II were not present in our included publications. Zhang et al. [24] suggested the reasons for not presenting with CAVB were primarily: (1) The improvement of the delivery system and occluder technology; (2) An experienced cardiovascular surgeon can reduce the damage to the bundle branch conduction system; (3) Choosing a suitable occluder.

The main limitation of this study is the fact that most of the studies included in this systematic review are retrospective, and most of the researchers are Chinese. The reliability of the conclusions of our meta-analysis was subjected to confounding factors and selection bias. The comorbidities and follow-up data are based on heterogeneous data and should be treated with considerable caution. Personal and institutional experience is essential for surgical repair. Although our analysis showed no significant reporting bias, this bias remains possible. More favorable results reported by large centers might not be representative of all institutions. Because the timeframe of the study period was rather long, advances in management and operational strategies may have been a confounding factor, limiting our qualitative and quantitative analyses. In addition, most of the patients in this study are from China, which also resulted in the older age of our patients.

For selected patients with ventricular septal defects, PDC is a safe approach, with less surgical injury and shorter perioperative hospital stay. Severe complications during follow-up were comparable in both groups, while PDC showed a lower incidence of residual shunts. However, the risk of developing aortic regurgitation after treatment with PDC is greater and requires long-term follow-up.