Disconnected pulmonary arteries are frequently misdiagnosed as “absent” [1]. Frequently these are initially fed by an aberrant ductus from the origin of the innominate artery, and become disconnected once the ductus closes [2]. On computed tomography (CT) or magnetic resonance imaging (MRI) they may not be well visible, as the flow is markedly reduced. Nevertheless, the ampulla of the aberrant ductus can frequently be identified. Pulmonary venous wedge angiography can help delineate the anatomy of the disconnected pulmonary artery, and determine the distance between the origin of the ductal ampulla and the hilus of the pulmonary artery (PA) [3].

Treatment may consist of primary surgery to reconnect the disconnected PA, or of initial catheterization to recanalise the arterial duct followed by surgery at a later stage [2, 4]. Both strategies can achieve growth of the PA.

If identified in early childhood, the aberrant arterial duct can be recanalised with stents, thus facilitating growth of the affected pulmonary artery [2, 5]. Surgical re-implantation onto the main pulmonary artery can then be achieved later [6, 7]. There is one report of a 10-year-old girl where this could be achieved too, but the majority of reported cases are small children [3].

Interestingly, in older children with this entity, abnormal lungs with bronchiectasis, recurrent pulmonary infections, hemoptysis and respiratory distress have been reported as early as 1982 [8]. It is not yet known if these changes can be prevented by early reconnection of the PA.

We present four cases of this entity, which illustrate anatomical and technical considerations.

Female ex-dysmature infant, birthweight 2800 g, 22q11 deletion. Right aortic arch. Hypoplastic left lung. The initial diagnosis was “absent LPA”, as this vessel was not visible on echocardiography or CT. However, on angio-CT an outpouching was noted at the base of the left sided innominate artery (Fig. 1A). On angiography at the age of 5 months, a tiny vessel could be seen towards the LPA (Fig. 1B). This could be entered with a 0.014 balance middleweight coronary wire through a 4F Cobra catheter (Cordis, Santa Clara, United States) followed by an 0.014 Ironman wire (both Abbott, Chicago, United States), over which the catheter was exchanged to a 5F Torqvue (Abbott, Chicago, United States). Two Onyx stents (4.5 15 mm and 5 15 mm, Medtronic, Minnesota, United States) were implanted overlappingly from the aberrant duct to the hilus of the LPA (Fig. 1C). The child was started on aspirin. 11 months later the LPA was re-implanted onto MPA with homograft patch anteriorly. During operation, the entire stents were removed. Over 10 months of follow up, no stenosis developed. The maximum flow velocity on continuous wave Doppler was 1.7 m/s during the last follow up visit. 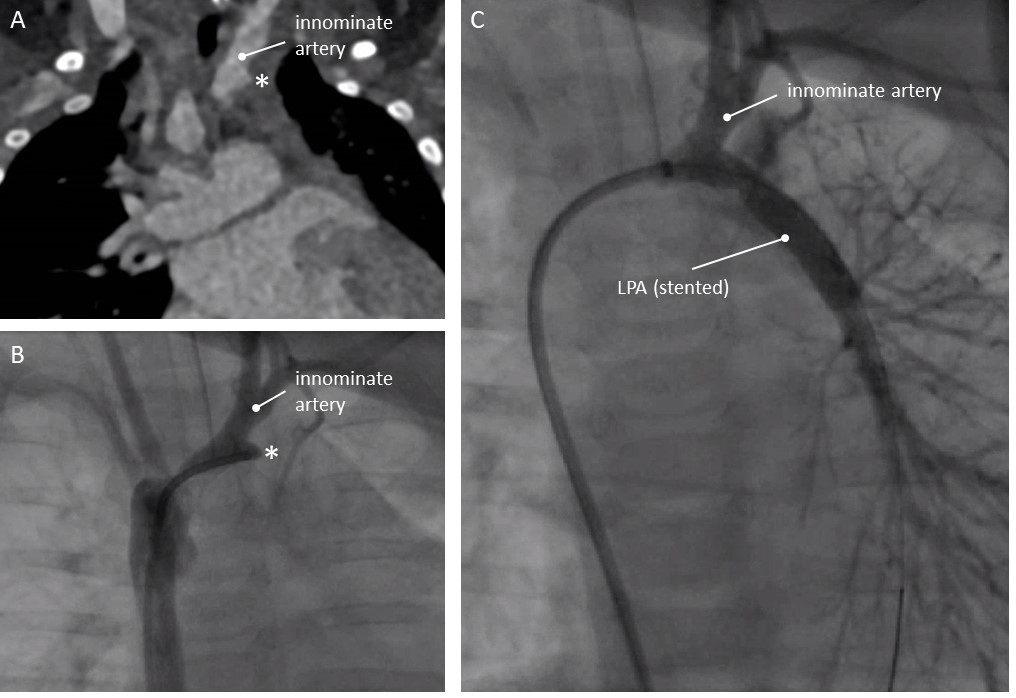 Male 8 months weighing 8 kg. Echocardiographically, the RPA (right pulmonary artery) could not be seen. On angio- CT, a hypoplastic right lung was diagnosed. The RPA could not be visualized, but at the base of the right innominate artery (in a left aortic arch) an outpouching was seen (Fig. 2A). Catheterisation at 9 months of age showed a meshwork of tiny vessels originating from here. The distal RPA appeared small (Fig. 2B). The aberrant ductus was entered through a RIM catheter (Cordis, Santa Clara, United States) with a 0.014 balance middleweight coronary wire followed by an 0.014 Ironman wire (both Abbott, Chicago, United States), and sequentially dilated with a 2.5 8 mm Sprinter coronary balloon and a 4 15 mm Sprinter balloon (Medtronic, Minnesota, United States), followed by stent implantation (Formula 5 20 mm, Cook Medical, Bloomington, United States) (Fig. 2C). The child received antiplatelet therapy with aspirin and clopidogrel. Postinterventionally, right sided unilateral pulmonary edema occurred within 12 hours, which was treated with diuretics. Transcutaneously measured oxygen saturation remained stable around 98% in room air. Epilepsy occurred post-interventionally, potentially due to emboli from the innominate artery. Six months later surgical re-implantation of the RPA onto the MPA was performed. After removal of stents, the remaining ductus was used as the posterior connection, and anteriorly augmented with a homograft patch. Eight months later re-stenosis of the RPA was noted for which balloon angioplasty was carried out successfully. 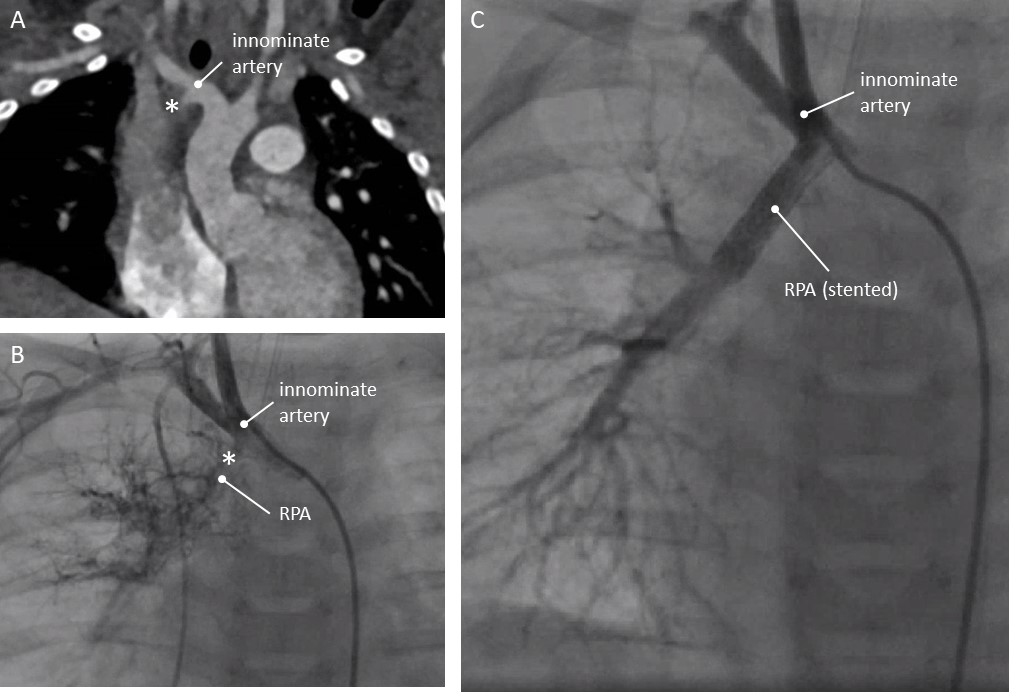 Female neonate 2.85 kg. Resuscitation after birth. Thoracic drains were inserted for a right sided pneumothorax. As the lungs did not expand immediately a CT scan was performed. On CT the RPA could not be visualized, but at the base of the innominate artery an outpouching was seen (Fig. 3A). Catheterisation was delayed due to antibiotic treatment for an infection, and was carried out on day 10. Through the foramen ovale, a wedge angiography was performed in the right pulmonary veins. This confirmed the presence of the RPA (see Supplementary Fig. 1). From the outpouching at the base of the innominate artery a tiny tortuous aberrant arterial duct was seen (Fig. 3B). Through a 4F Judkins right catheter (Cordis, Santa Clara, United States) coronary wires could not be forwarded, but a 0.018 hydrophylic angled wire (Terumo, Shibuya, Japan) straightened the duct reaching the RPA. A 0.014 GrandSlam wire (Asahi-intecc, Tokyo, Japan) was positioned as a buddy wire, after which the Terumo wire was removed carefully. Over the GrandSlam wire, two Rebel stents (Boston scientific, Marlborough, United States) of 3.5 8 mm and 3.5 12 mm were placed overlappingly through a 5F Launcher catheter (Medtronic, Minnesota, United States) (Fig. 3C). The child is currently awaiting surgery. Patency of aberrant duct restored in a neonate less than 3kg (patient 3, see text). (A) Computed Tomography, coronal view. No RPA visible. (B) Angiography. Left aortic arch indicated by catheter position. Catheter in the ductal ampulla. Small RPA discernable by direct injection into the ductus. Pleura drain in situ. (C) Angiography after stenting the ductus: continuity with RPA. * Ductal ampulla at the base of the right sided innominate artery. RPA, right pulmonary artery.

A 13-year-old female with right aortic arch. Since early childhood, she was diagnosed with a hypoplastic left lung and “absent left pulmonary artery”. On CT a possible small ductal ampulla at the origin of the innominate artery was seen (Fig. 4A). After extensive discussion, she underwent cardiac catheterisation. There was no connection from the origin of the innominate artery towards the left pulmonary artery. Via transseptal puncture, wedge-angiography into the left lower pulmonary vein was carried out and showed a very small caliber of the LPA without an obvious connection with the innominate artery (Fig. 4B). No intervention was carried out. Surgery was not considered feasible, as the distance from the MPA towards the remnants of the LPA was too large. From a developmental stance, persistence of the distal sixth aortic arch with proximal involution has been proposed [8]. With closure of the arterial duct, the typical outpouching at the origin of the innominate artery remains [8]. We found this outpouching in all of our patients, and in three of them there was an aberrant arterial duct which could be recanalised.

If such a duct is recanalised early in life, the pulmonary arteries can be resurrected and re-implanted onto the pulmonary trunk [2, 3, 4]. We could achieve this in two of our patients to date; with a third awaiting surgery. Comparable strategies have been described earlier [10] and are still applied [11]. In case of stenosis of the reimplanted vessel, percutaneous treatment can be performed.

Although there is one case report of recanalisation of the feeding aberrant ductus in a 10-year-old child [3], this may not always be possible at older age. This underscores the importance of early diagnosis and intervention. Recognition of this entity is important, as it can be detected antenatally [12]. Postnatal management can then be planned adequately.

Although there are case reports and case series, it is not yet known if early treatment can prevent later lung pathology. Hence, further follow up of patients treated early in childhood is important.

If a unilateral pulmonary artery seems “absent”, cross sectional imaging should be performed. If an outpouching at the base of the brachiocephalic artery is seen this is most likely the ampulla of a former aberrant ductus arteriosus. In early childhood, and sometimes beyond, this can be recanalised as a first step, followed by corrective surgery later.

TK, MD, IB and GB—carried out all cardiac catheterisations; AB—carried out cardiac surgery; TK—drafted the manuscript, which was critically reviewed by all authors.

The study fulfills the ethical requirements of the Declaration of Helsinki. According to Nethlerlands law the need for written consent was not mandatory for this pure retrospective description.