Epicardial adipose tissue (EAT) is found between the pericardial visceral layer and myocardium, surrounding the coronary arteries. An increase in EAT is positively associated with coronary artery disease (CAD) [10]. Cytokines released from the EAT are involved in causing atherosclerosis [11]. Previous studies have demonstrated that epicardial fat thickness (EFT) and TSH values are significantly related to SH. Higher EFT values have been reported in SH patients compared to EU individuals [12]. A recent study found that EFT was significantly increased in SH patients with a TSH level 10 mIU/L compared to SH patients with a TSH level 10 mIU/L. However, the EFT values were similar in SH patients and the control group [13].

Carotid intima-media thickness (CIMT) is a marker of subclinical atherosclerosis and was recently found to be associated with CAD [14]. However, the effect of SH on CIMT values is not clear [15,16]. A recent meta-analysis based on eight studies and 3602 patients demonstrated that the CIMT values were higher in SH patients with TSH 10 mIU/L compared to EU individuals [17]. CIMT values in SH patients vary with TSH levels, independently of other risk factors.

This cross-sectional study included 80 SH patients and 43 controls (matched by age and sex) who presented to our clinic between May and August 2020. SH was diagnosed on the basis of TSH levels 4.2 mIU/L (normal range: 0.27–4.2 mIU/L) and normal free T4 (normal range: 0.93–1.7 ng/dL), measured twice at a 3-month interval [1]. SH patients were categorized into those with mildly elevated TSH (4.2 TSH 10 mIU/L) or those with markedly elevated TSH (10 mIU/L). Patients with the following conditions were excluded from the study: left ventricular systolic dysfunction, valvular pathology, history of CAD, chronic lung disease, hepatic dysfunction, renal failure, malignancy, tobacco use, hypertension, diabetes mellitus, systemic infections or inflammatory disorders, secondary or postoperative hypothyroidism, pregnancy, or age 18 years or 65 years. None of the participants were using any lipid-lowering or thyroid-altering medications. Informed consent was obtained from all participants before the study. This study was performed in accordance with the Declaration of Helsinki and was approved by the ethics committee of the Van Training and Research Hospital.

Color M-mode Doppler recordings were obtained using the suprasternal window in supine position. The cursor was placed parallel to the direction of main flow in the descending aorta. The Nyquist limit was 30–50 cm/s, and a recorder sweep rate of 200 mm/s was used during M-mode. AVP was defined as the velocity of flow in the artery, calculated by dividing the distance between the points corresponding to the beginning and end of the propagation slope by the duration between the corresponding time points. At least three measurements were obtained, and their mean was recorded as the AVP (Fig. 1).

Aortic velocity propagation (AVP) in an euthyroid subjects (AVP = 67.3 cm/s) (A), and in a patient with subclinical hypothyroidism (AVP = 43.4 cm/s) (B). The AVP was calculated by dividing the distance between points corresponding to the beginning and end of the propagation slope by the duration between corresponding time points.

EFT was measured for the right ventricle’s free wall using the parasternal long-axis view with aortic annulus as the anatomic reference. EFT was measured during the end-systolic period. Epicardial fat was identified as the space without an echogenic view between the visceral pericardium and myocardium. EFT was measured at the thickest area, preferably the right supraventricular area (Fig. 2).

Measurement of epicardial fat thickness (EFT) in an euthyroid subjects (EFT = 0.4 cm) (A), and in a patient with subclinical hypothyroidism (EFT = 0.6 cm) (B). Epicardial fat thickness (EFT) perpendicular to right ventricular free wall. EFT identified as an echo-free space between the myocardium and visceral pericardium from the parasternal long-axis view on two-dimensional echocardiography, was measured perpendicularly in front of the right ventricular free wall at end-diastole.

Both carotid arteries were analyzed at plaque-free sites. CIMT was defined as the interval between the lumen-intima and the media-adventitia borders at the far wall 1–2 cm away from the common carotid artery bifurcation (Fig. 3) [18].

Carotid intima-media thickness (CIMT) in an euthyroid subjects (CIMT = 0.5 mm) (A), and in a patient with subclinical hypothyroidism (CIMT = 0.6 mm) (B). The CIMT was computed on the far wall at 1–2 cm from the common carotid artery’s bifurcation as the interval between the lumen-intima and the media-adventitia borders.

Data were analyzed with SPSS Statistics software (version 25.0 for Windows; IBM Corp., Armonk, NY, USA). The Kolmogorov-Smirnov test was used to confirm the normal distribution of continuous variables. Normally distributed variables were expressed as means standard deviations (SDs). Categorical variables were presented as percentages. Differences between the two groups in parameters with a normal distribution were evaluated using unpaired t-tests. A one-way analysis of variance (ANOVA) followed by a Tukey post hoc test were used for normally distributed continuous data to perform multiple comparisons. The frequencies of nominal variables were compared using Fisher’s exact test or chi-square test. Pearson test was used for evaluating the correlation between variables. A multivariate linear regression model was used to determine the independent predictors of AVP. Additionally, 15 patients were randomly selected to assess intra- and inter-observer reliability for AVP and EFT, expressed as intraclass correlation coefficients (ICCs). Statistical significance was defined at a p-value 0.05.

Table 2.The demographic and clinical data of the patients with subclinical hypothyroidism and control group. 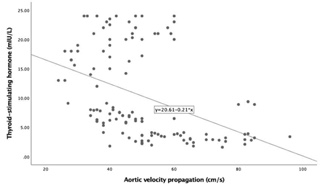 AVP is a parameter for aortic stiffness that can be measured during echocardiography. AVP had a significant correlation with aortic strain and distensibility in CAD patients [19]. Many studies have demonstrated increased vascular stiffness in patients with SH. However, a number of other studies did not find such an association.

Other studies did not report any significant association between SH and CIMT. Almeida et al. demonstrated that CIMT values were similar between SH patients with TSH 8 or TSH 8 mIU/L and positive or negative anti-TPO-Abs. They did not find an association of mild SH (in the absence of relevant metabolic changes) with the cardiovascular risk. Delitala et al. [39] demonstrated that the thyroid hormone levels were not associated with carotid artery plaque or increased CIMT. Additionally, Valentina et al. [15] reported that TSH levels were associated with higher CIMT values, independently of other risk factors such as dyslipidemia, hypertension, and age. They concluded that TSH may be responsible for increased CIMT in SH patients [15]. Our study showed that TSH had a weak and positive correlation with CIMT values. The CIMT values were increased in SH patients independently of traditional risk factors. We assumed that higher CIMT values in SH patients were related to endothelial dysfunction. Our findings are consistent with those of previous studies, which are that the increase in CIMT values in SH patients began in the subclinical stage.

There were a few limitations to this study. This was a single-center study based on a relatively small group of patients. The sample size may not be large enough to generalize the results of this study. Women are more prone to thyroid diseases than men. There were more female patients in the SH group than the control group. However, this difference was not statistically significant (p = 0.06). This difference in the sex ratio may explain the absence of sex differences in our study. We did not evaluate the autoimmune antibodies, such as anti-thyroglobulin antibody or anti-TPO-Ab, or their relationship with aortic stiffness. Pulse wave velocity is the gold standard for measuring arterial stiffness. However, we did not measure it in our study. We did not use magnetic resonance imaging or computed tomography to measure EFT. However, the use of echocardiography for the measurement of EFT is less costly and widely accepted. TC levels were similar between the study groups, probably because of the small number of patients and unknown duration of SH. A large randomized clinical trial is needed to validate these findings.

In conclusion, we found that AVP was lower and CIMT was higher in SH patients compared to EU individuals. Different mechanisms may be responsible for the role of TSH in aortic stiffness and subclinical atherosclerosis in SH patients. These mechanisms should be investigated further. The present study suggested that AVP, EFT, and CIMT should be routinely measured in SH patients.

All subjects gave their informed consent for inclusion before they participated in the study. The study was conducted in accordance with the Declaration of Helsinki, and the protocol was approved by the Ethics Committee of Van Training and Research Hospital (approval number: 2020/25).

Aortic velocity propagation (AVP) in an euthyroid subjects (AVP = 67.3 cm/s) (A), and in a patient with subclinical hypothyroidism (AVP = 43.4 cm/s) (B). The AVP was calculated by dividing the distance between points corresponding to the beginning and end of the propagation slope by the duration between corresponding time points.