Subjects aged 65 years are a fast-increasing component of the population and represent a quickly increasing amount of patients admitted with acute myocardial infarction (AMI), either with ST-elevation (STEMI) or without ST-elevation (NSTEMI). Advanced age is a robust predictor of poor outcomes. The majority of AMI trials in Romania have included a small number of elderly patients, and this explains why incomplete data are presented on the management and prognosis of this increasing subgroup of AMI patients.

Standard therapies are not always applied in the elderly, as the evidence of benefit is deficient and the danger of complications is high for this age group [1, 2, 3]. These facts can be also explained by some specific clinical characteristics of the elderly at presentation: the symptoms of the ACS may be atypical, the electrocardiographic signs are often less specific and the comorbidities may lead to a confounding clinical picture. All these may lead to diagnostic incertitude and postponed or conservative therapeutic strategies [1].

This situation can be found in Romania too, though aggravated by the small number of catheterization laboratories that are able to perform urgent coronary revascularization (23, for a population of 20 million inhabitants). Our retrospective study is the first one done in Romania addressing AMI patients aged 65 years. In-hospital and 1-year mortality, as well as 1-year readmission rate, were evaluated in the elderly and compared with those found in the AMI patients aged 65 years.

This is a retrospective cohort study. Between 1 January and 31 December of 2020, 524 patients with AMI were admitted to the Cardiology Clinic of the Timisoara Institute of Cardiovascular Diseases within the first 12 hours of the onset of the symptoms. In the absence of contraindications, urgent percutaneous coronary intervention (PCI) was done.

The initial evaluation was grounded on the analysis of low and/or high-probability features resulting from symptoms and signs at presentation, 12-lead ECG, and cardiac troponin [4, 5]. The diagnosis of STEMI was grounded on the existence of at minimum 2 of these 3 parameters: (1) typical angina lasting for more than 20 minutes; (2) ST-segment elevation 1 mV, lasting for 0.08 sec after the J point, in minimum 2 contiguous leads; (3) temporary increase in cardiac enzymes to at least twofold the upper normal laboratory range [4]. NSTEMI was defined when ST-segment depression or deep T‑wave inversion were observed on the ECG, without ST-segment elevation, and/or the biomarkers of myocardial necrosis were increased (e.g., troponin I 1 g/L in our laboratory), in an adequate clinical background (chest pain or angina correspondent) [5].

The PCI was performed and the associated pharmacological treatment was administered according to the European Society of Cardiology (ESC) guidelines [4, 5]. All patients were given a loading dose of 300–600 mg clopidogrel. They habitually received before PCI 5000 IU unfractionated heparin and 300–500 mg aspirin. Glycoprotein IIb/IIIa inhibitors were administered when the operator considered it necessary. If a coronary stent was implanted, clopidogrel was prescribed for 12 months, associated with aspirin.

The inclusion criteria were a confirmed diagnosis of AMI in patients hospitalized within the first 12 hours of the symptoms onset and the absence of exclusion criteria.

The study was advised by the Ethics Commission of the Victor Babes” University of Medicine and Pharmacy. All patients provided written informed consent for participation in the study, in accordance with the Human Rights Declaration of Helsinki.

Medical treatment reports were accomplished at discharge and at the 1-year follow-up.

The cause of death was determined from hospital records, or by a phone conversation with the patient‘s physician for those who died at home.

The primary endpoint was in-hospital mortality, stated as the death of any cause in the course of the hospitalization for AMI. As cardiac deaths were regarded as those due to AMI, heart failure, cardiogenic shock, acute pulmonary edema, cardiac rupture, or ventricular fibrillation. Noncardiac deaths were stated as deaths having an extra-cardiac cause, e.g., stroke, sepsis, acute renal failure.

The secondary endpoints were mortality and readmission rates throughout the 1-year follow-up phase. 1-year mortality included all-cause (cardiac and non-cardiac) deaths. 1-year readmissions included as causes recurrent myocardial infarction (MI), stent thrombosis, stroke, and bleeding. Recurrent MI was defined using the Academic Research Consortium criteria [6]. Bleeding complications were stated using the Bleeding Academic Research Consortium and the Thrombolysis In Myocardial Infarction bleeding classifications [7, 8]. Stroke was diagnosed in the presence of an irreversible neurological deficit, as stated by a neurologist, and based on supporting evidence, such as brain images.

A patient was stated to be hypertensive when his blood pressure was 140/90 mmHg during hospitalization, when previously diagnosed with hypertension, or when taking antihypertensive medication [10]. Valvulopathies were diagnosed by history, physical examination, and echocardiography [11]. The diagnosis of peripheral artery disease diagnosis was grounded on history, physical examination, ankle-brachial index, and Duplex ultrasound [12]. Hypercholesterolemia was stated by history, the current use of lipid‑lowering agents, or laboratory determinations (total cholesterol 6.22 mmol/L or low‑density lipoprotein cholesterol 4.14 mmol/L [13]. Chronic kidney disease was diagnosed when the estimated glomerular filtration rate was below 60 mL/min/1.73 m [14]. Obesity was defined when the body mass index exceeded 30 kg/m [15]. Diabetes mellitus was diagnosed when glycated hemoglobin was 6.5%, fasting plasma glucose level 7.0 mmol/L (126 mg/dL), or when plasma glucose was 11 mmol/L (200 mg/dL) at two hours after 75 g oral glucose load [15]. Chronic obstructive pulmonary disease diagnosis was based on GOLD criteria [16].

Echocardiographic examination was performed during the first 24 hours of hospital admission, using a VIVID S5 ultrasonograph device. LVEF was calculated using the Simpson method. The E/A ratio was determined by means of the antegrade mitral flow [17].

Data were collected and analyzed using the MedCalc Statistical Software version 19.1.7 (MedCalc Software Ltd, Ostend, Belgium) for Windows. Data are given as mean SD for continuous variables, and as frequencies and percentages for categorical variables. The comparisons between two groups of continuous data were analyzed using t‑tests, while the comparisons of categorical data were studied using Chi‑square tests. To evaluate the participation of each parameter in the evaluated outcomes, univariate and multivariate logistic regression models were used. Cox regression analysis was performed to calculate hazard ratios (HRs) and 95% confidence intervals (CIs). All basal parameters that could be associated with hospital readmission at univariate analysis were included in multivariate logistic regression analysis with the forward stepwise method. The discriminative capacity of the analyzed parameters was assessed by means of the receiver operating characteristic (ROC) curves. The threshold for statistical significance was established at a P-value of 0.05. All P-values were results of two-tailed tests.

Table 2 presents the data of emergency coronagraphy. No angiography could be done in 5 (1.9%) of group I patients and 2 (0.09%) patients of group II (P = 0.66), because of severe kidney failure. Group II patients had a significantly higher proportion of monovascular coronary disease (P = 0.0001), a significantly lower proportion of triple vessel disease (P = 0.03), and had a significantly higher rate of interventional revascularization by PCI (79% vs. 65%, (P = 0.0008). The rate of coronary artery bypass graft was 2.6% in group II and 2% in group I (P = 0.66). Regarding the concomitant medication, diuretics were more often administered in group I patients (P = 0.02). 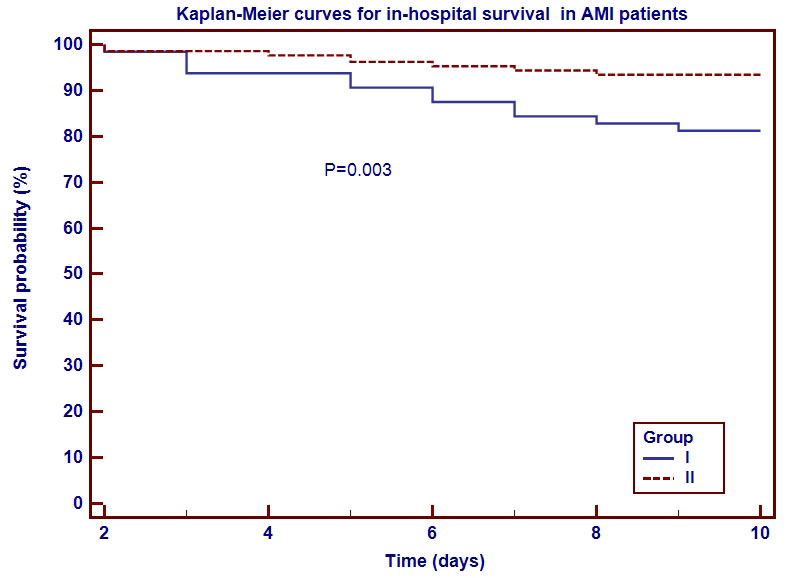 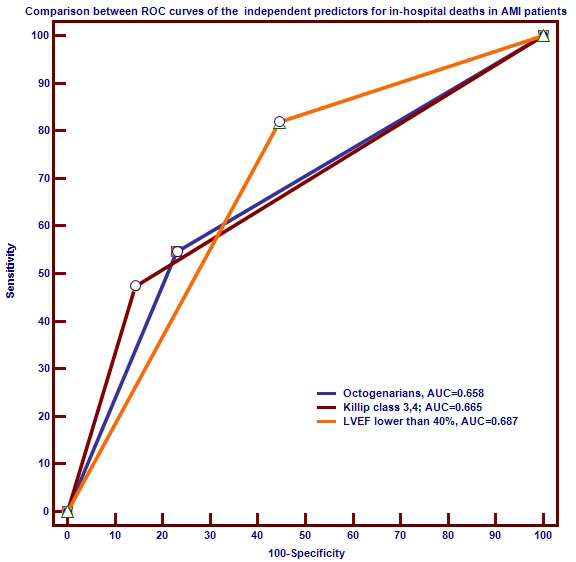 Throughout the 1-year follow-up phase, 22 patients (5.2%) were rehospitalized. The readmission rate was lower in group I patients, but the difference was not notable (P = 0.24). The causes of readmissions had similar frequencies in the two groups (Table 4).

In Romania, cardiovascular diseases are responsible for 63% of all deaths, while in Europe the proportion is 37%. AMI represents the main cause of death in patients with coronary artery disease. In our country, about 13,000 people experience an AMI every year, and the AMI-related death rates reach disturbing levels. The death risk is greatest during the first 2 hours from the onset of the symptoms. According to the data published by the Romanian Registry for ST-Elevation Myocardial Infarction (RO-STEMI), 52% of deaths take place before the patient reaches the hospital. The death rate drops considerably after admission, reaching 19% on the first day and 8% on the second day of hospitalization. About 21% of deaths occur later on, up to 1 month after the AMI [19].

During the last decades the incidence of AMI, as well as its mortality, has decreased essentially in developed countries [20, 21]. This favorable tendency reflects a change for the better in many parameters that affect the prognosis in patients with AMI. Advanced age, as a parameter we cannot influence, has a negative prognostic impact value in most studies [22]. One of the most potent variables that improve outcomes in AMI patients is the myocardial revascularization by urgent PCI [23]. We applied the standard WHO definition of elderly patients [24].

Our study is the first one performed in Romania addressing AMI patients aged 65 years.

All patients were treated at an academic tertiary hospital, able to provide 24/7 catheterizations and to ensure the urgent coronary revascularization interventions for the western region of Romania. All reperfusion procedures were done only by PCI, in a group of successive, unselected AMI patients, with or without ST-segment elevation. The main findings of the present observational cohort study were as follows: patients with AMI 65 years treated with urgent PCI showed a worse in-hospital prognosis than those aged 65 years. The in-hospital mortality was 20% in patients aged 65 years, versus 6% in patients aged 65 years, P 0.0001. This fact could be justified by the greater rate of comorbidities, the higher Killip class, the higher prevalence of arrhythmias and old congestive heart failure in the elderly. Angiographic data also showed more frequent triple vessel disease in the elderly.

Despite the added, recognized risk factors and the poorer expected outcome in the elderly AMI patients, we found that the rate of diagnostic coronary angiography of was notably lower in this high-risk group (67% vs. 82%, P 0.001). Also, interventional revascularization by primary PCI was done less frequently in the patients aged 65 years (P 0.001). CABG was performed in about 2% of all AMI patients, regardless of the age group. On the subject of the concomitant medication, only the diuretics were more often prescribed in the elderly, as they presented more often heart failure.

At discharge, the elderly patients received more often diuretics and oral anticoagulants, and less often beta-blockers. Among the discharged patients, mortality during the 1-year follow-up period was marginally higher in the elderly (P = 0.05). The readmission rates were similar (P = 0.25) in the two patient groups After discharge, the survivors were followed up for 1 year.

An assessment in relationship with other previously published data in Romania is difficult due to the notably lower catheterization and revascularization rates in the elderly AMI patients, in our country. Mehta et al. [25] evaluated in-hospital mortality in STEMI patients (age 70 y) and described lower mortality rates compared to our findings (14.4% in PCI-treated patients). Ishihara et al. [26] reported the prognosis of a large group of AMI patients. The investigators enrolled only patients that underwent catheterization in the first 24 hours from admission. The in-hospital death rate was two-fold greater in the elderly (70 years. Another independent predictor of in-hospital mortality in AMI patients was Killip class at admission (P 0.0001, 95% CI 0.738–0.835).

The current study was observational, non-randomized, conducted in a single center, with no control group. Nonetheless, the research included unselected, successive AMI patients. AMI admitted to a center with readily available catheterization laboratories to perform urgent coronary revascularization, which provides urgent coronary revascularization for the western region of Romania.

Although the angiographic findings were not evaluated by an independent laboratory or in a blinded mode, although, they were assessed by qualified physicians with great experience in interventional cardiology.

The study was advised by the Ethics Commission of the Victor Babes” University of Medicine and Pharmacy (Ethics approval number: 020). All patients provided written informed consent for participation in the study, in accordance with the Human Rights Declaration of Helsinki.