Obstruction of the left ventricular outflow tract (LVOT) is an important pathophysiologic component of hypertrophic cardiomyopathy (HCMP) [1]. Resting outflow gradients are independent determinants of progressive heart failure symptoms and cardiovascular mortality [2, 3]. Resting LVOT obstruction, however, has been classically reported to be present in only 20% to 25% of patients with HCMP [4, 5]. Indeed, Maron et al. [1] showed that among HCMP patients who sought clinical evaluation, inducible LVOT obstruction was identified in as high as 70%. Also, Shah et al. [6] demonstrated that approximately two-thirds of 87 patients with symptomatic non-obstructive HCMP had latent obstruction (LO). Recently, Vaglio et al. [7] documented that LO in HCMP is an adverse prognostic indicator in patients with HCMP. These findings suggest that all patients with non-obstructive HCMP should be diagnosed using provocative maneuvers to identify LO. Despite LO having been shown to be associated with poorer prognosis in patients with non-obstructive HCMP, hemodynamic and geometric determinants of LO are not fully understood. In addition, provocative methods to induce LO have not been standardized.

We evaluated the pathophysiology of exercise-induced LO in non-obstructive HCMP with a single exercise protocol. In addition, we sought to identify the determinants of LO, including morphologic and hemodynamic parameters.

Thirty-five patients with non-obstructive HCMP (resting trans-LVOT gradient 30 mmHg) were examined with stepwise supine bicycle exercise echocardiography after comprehensive resting echo-Doppler evaluations between January 2008 and May 2009. The diagnosis of HCMP was based on the echocardiographic demonstration of a non-dilated, hypertrophied LV in the absence of other cardiac or systemic diseases that could cause LV hypertrophy. Patients were eligible for the study if they had non-obstructive HCMP and structurally normal mitral valves. None of the patients had resting obstructive HCMP, structural mitral valve or subvalvular lesions, or other cardiac disease, including organic valvular, pericardial, congenital, or infiltrative heart disease. If the patients had been prescribed beta-blocker, they requested to stop beta-blocker at least 3 days before the exercise echocardiography.

Echocardiographic studies were performed at baseline according to the recommendations of the American Society of Echocardiography. Left ventricular outflow tract gradients were measured with continuous-wave Doppler interrogation directly parallel to the LVOT in the apical five-chamber view under direct visualization. Also, the data examined included left ventricular ejection fraction (LVEF), left ventricular end-systolic dimension (LVESD), left ventricular end-diastolic dimension (LVEDD), maximal septal wall thickness and mitral geometric parameters such as mitral annular diameter and mitral leaflet length (which was defined as the distance from the anterior mitral leaflet tip to the point of its attachment to the mitral annulus). Residual mitral leaflets were defined as residual portions of leaflets after coaptation (Fig. 1). After resting images were obtained, images were taken as the patients performed bicycle ergometry at two-minute workloads of 25, 50, 75, 100, 125, 150 and 175 watts. Images were also taken immediately post-exercise and after resting for one minute and three minutes. Images in three planes were viewed (apical five-chamber view, apical four-chamber view, and parasternal long view). Trans-LVOT pressure gradient, mitral geometric parameters, LVEF, LVESD, and LVEDD were measured at each stage.

LO was defined as a left ventricular outflow pressure gradient 30 mmHg at rest that increased to 30 mmHg with provocation [8].

Patients were divided into two groups according to the development of LO (LO group and non-LO group).

All analyses were performed using the SPSS statistical package version 25 (IBM Corp., Armonk, NY, USA). Differences between the LO group and the non-LO group were analyzed by Student’s t tests or Mann-Whitney tests for continuous variables. Categorical variables, expressed as numbers or percentages, were analyzed using the chi-square test or Fisher’s exact test. Comparisons of changes in the morphologic and hemodynamic parameters between groups at each stage were by two-way analysis of variance. p values 0.05 were considered statistically significant.

The mean age of subjects at initial evaluation was 49.4 13.9 years. There were 24 men and 11 women in the study sample. All patients were clinically stable and in sinus rhythm. In 26 patients (75%), LO could not be induced in response to exercise provocation. Significant LO developed in a total of nine patients (25%). The correlations between baseline clinical and echocardiographic characteristics associated with a response to exercise are listed in Tables 1 and 2, respectively. Between the two groups, gender, medical therapy, resting hemodynamics, left ventricular dimensions, and ejection fractions were comparable. Compared to the remaining patients, however, patients who had LO in response to exercise provocation were characterized by a longer residual mitral leaflet (4 4 mm vs. 13 4 mm, p = 0.001) and a higher resting LVOT pressure gradient (7.4 3.7 mmHg vs. 12.9 5.8 mmHg, p = 0.001).

Changes in heart rate and blood pressure differed significantly at each stage, and there were no differences between the two groups (Table 3). The mean LVEF, LVESD, and LVEDD did not differ significantly at each stage or between groups. However, mitral annular diameter decreased from peak exercise to post-exercise only in the LO group, while there were no changes in the non-LO group (–7.0 2.1 mm vs. 0.5 2.0 mm, p = 0.001) (Fig. 2). 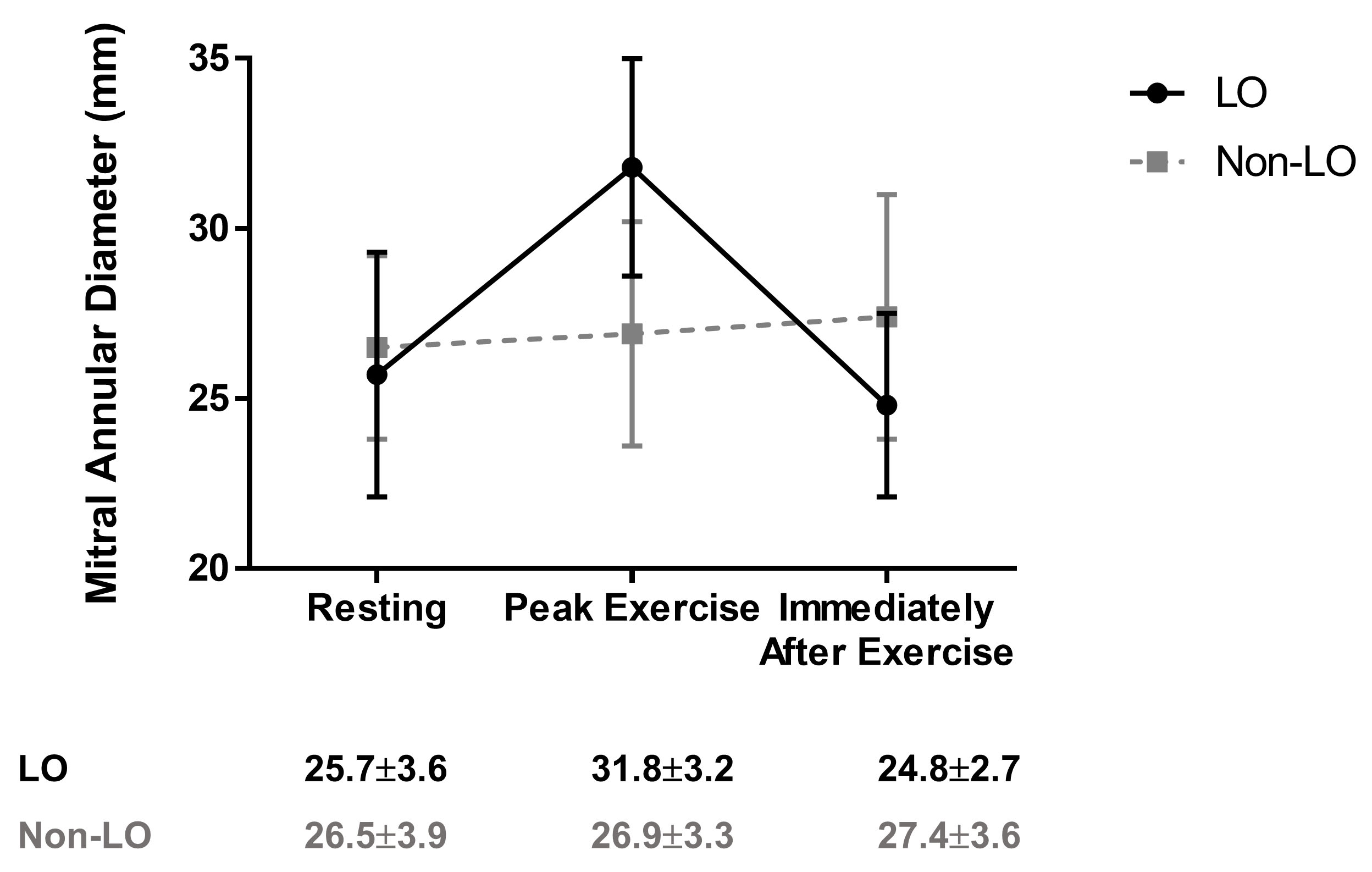 Change in mitral annular diameter during exercise in both groups. The term latent obstruction (LO) has been used to describe gradients that only appear with provocation [9]. Although many mechanisms have been proposed to explain the pathophysiology of exercise-induced LO in non-obstructive HCMP, the precise mechanism of its onset and cessation remain undefined. Various physical and pharmacologic maneuvers (e.g., catecholamine-stimulating drugs such as dobutamine and isoproterenol, Valsalva maneuvers, amyl nitrite inhalation, and premature ventricular contractions) have been used for the induction of pressure gradients in both cardiac catheterization and echocardiography laboratories. The problem with these methods is that they do not reliably reproduce the physiological circumstances in which LO is likely to occur [8, 10]. Recently, it has been proposed that exercise is the only provocative method that is truly physiologic and is therefore the most analogous to conditions under which HCMP patients develop symptoms [1, 6].

We studied a selected group of patients with non-obstructive HCMP using Doppler echocardiography both to evaluate the pathophysiology of exercise-induced LO and to identify the determinants of LO, which include morphologic and hemodynamic parameters. The results of this study showed that (1) patients with LO had a longer residual mitral leaflet and a higher resting LVOT pressure gradient than the remaining patients at baseline, (2) sudden decrease in mitral annular diameter from the peak exercise phase to the phase immediately after exercise was dominant in the LO group, and (3) the highest peak LVOT pressure gradient predominantly occurred immediately after exercise rather than during peak exercise.

The abrupt decrease in mitral annular diameter immediately after cessation of exercise was significant in the LO group. Shah et al. [12] have shown a greater reduction in size of the mitral annulus in early systole in obstructive HCMP with SAM than in normal subjects. The ability of this phenomenon to explain the pathophysiology of LO, however, is limited because the movement of the mitral valve apparatus toward the ventricular septum due to the pressure gradient in LVOT can induce these findings. Change in mitral annular diameter in LO group of our study may also be secondary change related to systolic anterior motion of mitral valve.

We found that significant LO developed in 25% of the present study cohort. LO in HCMP may importantly affect clinical decision making in that patients with severely symptomatic LO with physiological provocation are potential candidates for invasive treatments such as surgical reduction therapy (myomectomy and alcohol septal ablation) or alternatively mitral valve repair to normalize LV pressures and improve symptoms [6, 13, 16, 17, 18].

There are several limitations to our study. First, the number of patients with LO was limited and this could have affected our results. Second, although we requested study patient to stop medications at least 3 days before the exercise echocardiography, the use of beta-blockers before exercise might have affected the results. There was a higher proportion of beta-blocker use in the non-LO group, although this difference was not statistically significant. Third, some patients did not achieve appropriate workload levels due to leg pain or fatigue. If a patient cannot reach 85% of their maximal age-predicted target heart rate for whatever reason, the test’s capacity for detecting significant LO may be reduced. Fourth, supine bicycle exercise may affect the study results. Compared to standing position, increased venous return and increased preload may attenuate LVOT obstruction during provocation in HCMP. Fifth, Valsalva maneuver was not included in this study protocol. Although Valsalva maneuver has frequently been recommended in echocardiographic examination of HCMP, it cannot not reliably reproduce the physiological circumstances. Inprevious study using exercise echocardiography in patients with patients with HCMP, LVOT obstruction during Valsalva maneuver could not predict exercise-induced LVOT obstruction [13].

In conclusion, we performed exercise echocardiography to evaluate the pathophysiology and determinants of exercise-induced LO in patients with non-obstructive HCMP. Decrease in mitral annular diameter immediately after exercise, a longer residual mitral leaflet and a higher resting LVOT pressure gradient at rest might be related to LO.

All patients gave written informed consent and the Institutional Review Boards at our center approved this study (approval number: 3-2021-0088). The protocol for this study was in accordance with the Declaration of Helsinki.

We would like to express our gratitude to Eun-Jung Lee, Soreen Chung and Hee Eun Cho who helped us during data collection.