Compared to non-pregnant women, pregnant women are known to be more susceptible to cardiac arrhythmias, because of a combination of hormonal, hemodynamic, and autonomic changes (Moore et al. 2012). Tachyarrhythmias, especially atrial fibrillation (AF) might present and be exacerbated during pregnancy (Moore et al. 2012; Lee et al. 2016; Vaidya et al. 2017). According to the recent report, AF (27/100,000) and paroxysmal supraventricular tachycardia (PSVT) are the most frequent (22-24/100,000) arrhythmias during pregnancy (Vaidya et al. 2017). Most cardiac arrhythmias can be effectively treated with medications (Shotan et al. 1997). However, if the arrhythmia is refractory to medical treatment, catheter ablation is another choice but radiation exposure is a concern. Here, we report a case of Wolff-Parkinson-White (WPW) syndrome during early pregnancy in which an accessory pathway (AP) was successfully ablated without fluoroscopy.

A 36-year-old woman of 12-week gestation visited the emergency department, complaining of palpitations, which had developed 5 days prior. She also presented with chest discomfort and dyspnea. Her initial vital signs exhibited a blood pressure (BP) of 120/80 mmHg and heart rate of 166 beats per minute. The Electrocardiography (ECG) (Fig. 1) checked in the emergency room (ER) demonstrated an irregularly irregular wide QRS tachycardia with delta waves, which meant AF combined with ventricular pre-excitation. 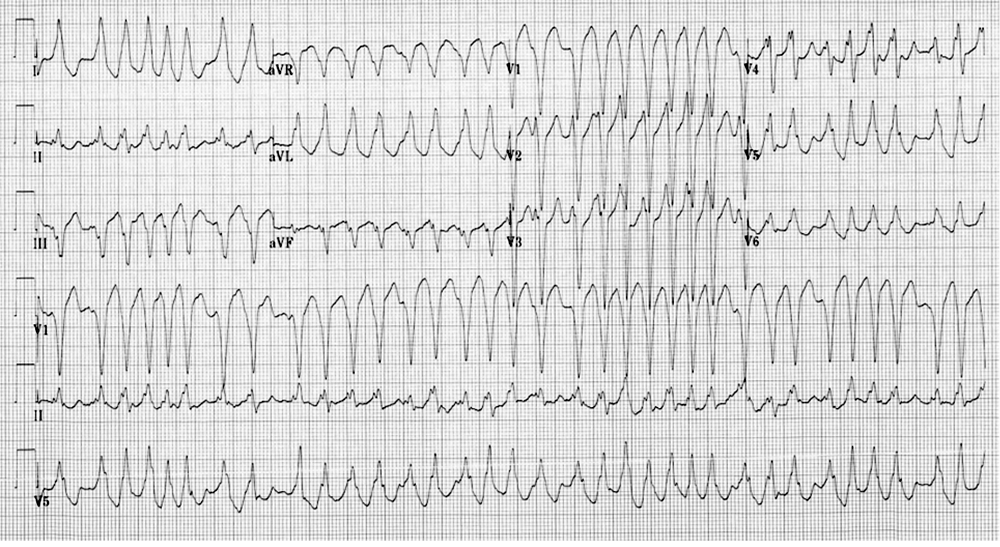 The shortest pre-excited RR interval was 200 ms on her ECG, which could be a high risk for degeneration into ventricular fibrillation. During the evaluation in the ER, she complained of more severe chest discomfort and palpitations and her BP decreased to 90/60 mmHg. So, she received cardioversion immediately via an external defibrillator. The patient's rhythm successfully converted to sinus rhythm with prominent delta waves (Fig. 2A). The polarity of the delta waves in leads V5, V6, I, and aVL were positive and negative in leads V1, III, and aVF, which suggested that the AP was located on the right posterior free wall. Transthoracic echocardiography (TTE) demonstrated left ventricular systolic dysfunction (ejection fraction 43%), most probably induced by the tachycardia, but there were no structural abnormalities (Fig. 3). Concerning the side effects of long-term medication use during pregnancy and also the high risk of ventricular fibrillation due to short shortest RR interval, we decided to ablate the AP without fluoroscopy guidance. An electrophysiology study was performed after informed consent was obtained. Before the procedure, there were also no fetal abnormalities noted in the obstetric consultation. At the time of the procedure, the gestational age of the fetus was 13th week and 1 day. 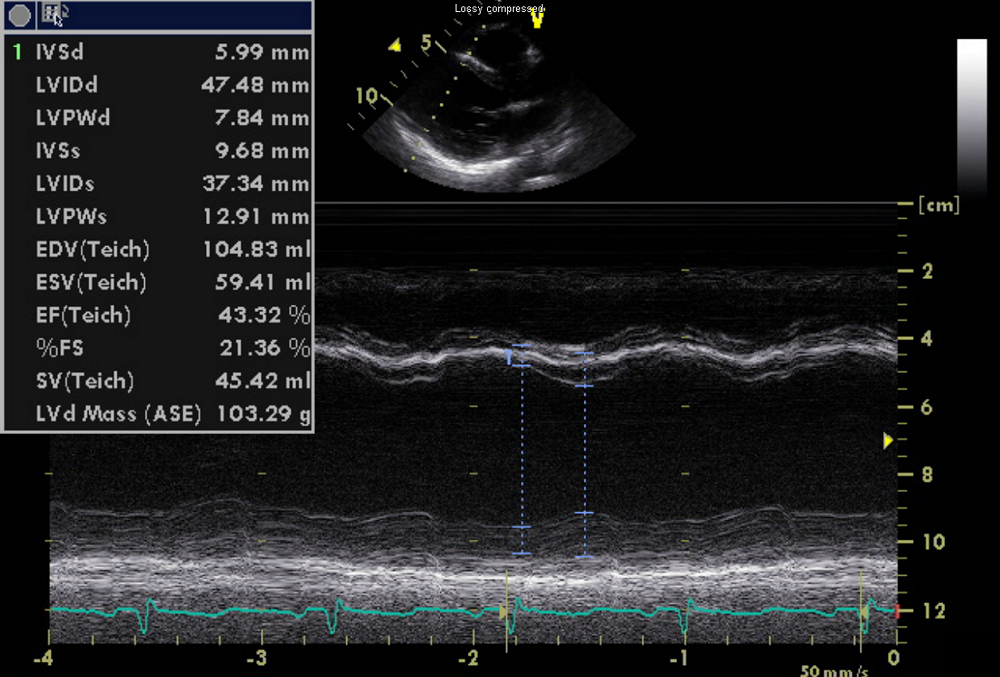 The transthoracic echocardiography demonstrated left ventricular systolic dysfunction (ejection fraction 40%), most probably induced by the tachycardia, but there were no structural abnormalities.

An electrophysiology study was performed with guidance of intracardiac echocardiography (ICE, Soundstar, 8 French, Biosense Webster, Johnson & Johnson Medical, Ltd., CA, USA) and a 3-dimension (3D) navigation system (CARTO, Biosense Webster Inc., Diamond Bar, CA, USA. We punctured the right femoral vein and blindly (without fluoroscopy) inserted a guidewire through the inferior vena cava up to the right atrium (RA). TTE was able to identify the appropriate placement of the guidewire. Then, a long sheath was introduced into the RA for the catheter. One quadripolar catheter (Webster electrophysiology catheter, 5 French, F-coumand type, Biosense Webster Inc., Diamond Bar, CA, USA) was positioned in the right ventricle apex (RVA) and a radiofrequency (RF) ablation catheter (ThermoCool NaviStar; 7.5 French, D-F curve, Biosense Webster, Inc, Diamond Bar, CA) was inserted into the RA. With the ablation catheter and CARTO-Sound, we reconstructed the anatomical geometry of the RA. The patient had a dangerous AP in which the shortest pre-excited RR interval was less than 250 ms. So, our strategy was to ablate the AP regardless of tachycardia induction. We measured the atrioventricular (AV) interval along the tricuspid annulus (TA) in the RA. Initially, the shortest AV interval was found near the TA 8 o'clock position. We ablated the site with the shortest AV interval while maintaining a good catheter position and appropriate contact using ICE and TTE (Fig. 4). Normal saline (0.9%) was infused through the irrigated-tip catheter at a rate of 8 mL/min during RF delivery (30 W). Between applications, a flowrate of 2 mL/min was used to maintain patency.

However, even after twelve ablation applications, the AP conduction still remained. At that time, we had two options to map the AP in detail. One was conventional mapping with a halo catheter, and the other one was to perform 3D electroanatomic mapping (activation mapping). We inserted a steerable duodecapolar catheter (Livewire, 7 French, St. Jude Medical Inc, St Paul, MN, USA) to map the RA (Fig. 5A). Meanwhile, the tachycardia was easily induced spontaneously or by ventricular extrastimuli. During the sustained tachycardia, the shortest VA interval was observed on the low right atrial (LRA) 5-6 pair, which was at the TA 8 o'clock position when mapping (Fig. 5B). The ventricular pre-excitation suggested a right-sided AP. The VA conduction was right-sided eccentric conduction without a decremental property when RVA stimulation was performed using the ablation catheter. A right-sided eccentric supraventricular tachycardia (SVT) was induced by programmed extra-stimulation at the RVA. These findings suggested an atrioventricular reentrant tachycardia using a right free wall AP. We ablated the site several more times (6 applications). Then, the site of the earliest retrograde atrial activation during the tachycardia changed from the LRA 5-6 pair to the high right atrium (HRA) 1-2 pair (Fig. 5C). It was verified using the ablation catheter that the atrial and ventricular signals were fused at the TA 9 o'clock position. We ablated the fusion site and finally the delta waves were successfully abolished (Fig. 5D). The RF power setting was 30 W. The AP was eliminated within 5 s of RF application, which was continued for 30 s. Three booster RFs were delivered at the success site. 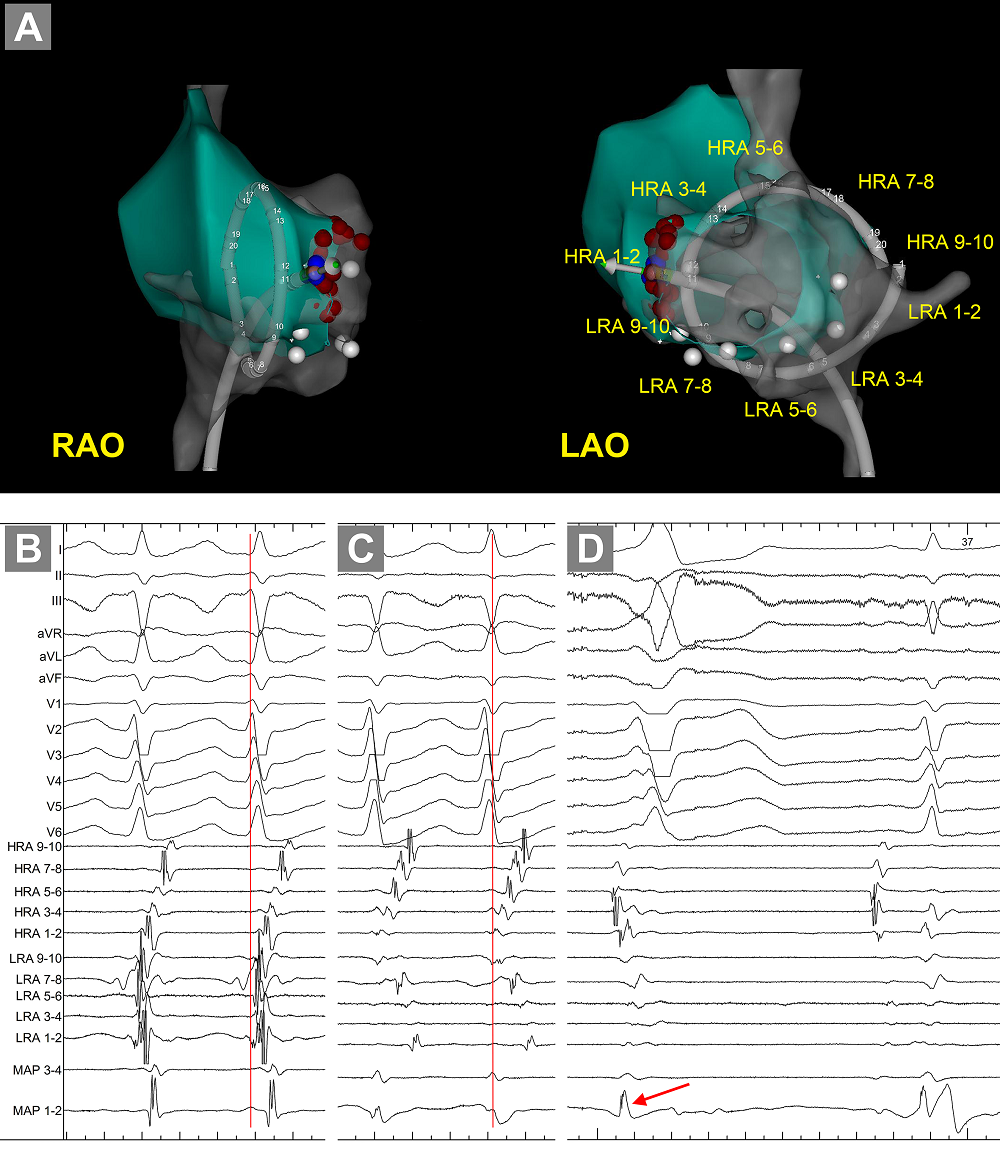 (A) The geometry was acquired using the CARTO-Sound system (CARTO, Biosense Webster Inc., CA, USA). A steerable duodecapolar halo catheter (Livewire, 7 French, St. Jude Medical Inc, St Paul, MN, USA) was placed in the RA along the tricuspid annulus (TA). The white dots are the landmarks for the orientation. The red and blue dots are ablation sites. (B) Intracardiac electrogram (EGM) during the tachycardia induction. Notice the earliest retrograde atrial activation site was observed near the low right atrial (LRA) 5-6 pair, which was at the TA 8 o'clock position when mapping. At that moment, the location of the duodecapolar catheter was different from that in panel A. (C) After the ablation at the TA 8 o'clock position, the earliest retrograde atrial activation site changed to the high right atrium (HRA) 1-2 pair. (D) The ablation was performed near the HRA 1-2 pair where the atrial and ventricular signals were fused (red arrow). The site was the TA 9 o'clock position. The delta waves were eliminated during the ablation.

After the ablation, no tachycardia was induced by programmed extrastimuli and the delta waves no longer existed. She did not complain of palpitations anymore and was discharged without medications. Before her discharge, TTE demonstrated that the LV systolic function had recovered. A follow-up ECG at the outpatient clinic after 2 months did not exhibit any delta waves (Fig. 2B).

We successfully performed catheter ablation of WPW syndrome in an early pregnancy woman without fluoroscopy under guidance of ICE and a catheter navigation system. The patient's SVT burden was severe enough to pose hemodynamic instability. Furthermore, the shortest pre-excited RR interval was less than 250 ms. Therefore, we decided to perform catheter ablation even during the early period of her pregnancy.

Although, most cardiac arrhythmias are benign during pregnancy, not all SVTs are well controlled with medical treatment. Moreover, sustained SVT has worse obstetric and fetal outcomes and are related to severe maternal morbidity, caesarean deliveries, low birth weights, preterm labor fetal stress, and fetal abnormalities (Chang et al. 2017). AF is also associated with an increased mortality risk and a rapid ventricular response can lead to hemodynamic instability (Moore et al. 2012). Therefore, the current guidelines recommend DC cardioversion if the patient's hemodynamic status is unstable. It appears to be safe during all stages of pregnancy and does not compromise the fetal blood flow (Regitz-Zagrosek et al. 2018). The present case initially also had WPW syndrome combined with AF. Because of the hemodynamically unstable state and it was repetitively sustained, external cardioversion was performed.

According to the current guidelines, the recommendation of catheter ablation is a class IIa; level of evidence C (Brugada et al. 2020; Iung et al. 2018). It should be performed in experienced centers with drug-refractory and poorly tolerated SVTs in the case of not using fluoroscopy. There have been some trials and successful ablation cases of pregnant women with minimal use of fluoroscopy (Ferguson et al. 2009; Kozluk et al. 2017). However, there have been relatively few pregnant women that have undergone the procedure totally without fluoroscopy. We performed the present case with zero fluoroscopy. As the patient received ablation with zero fluoroscopy, the concern of radiation related teratogenicity of the fetus was eliminated. Previous studies have demonstrated no additional harmful complications during zero fluoroscope ablation procedures (Szumowski et al. 2005; Tuzcu 2012; Bigelow et al. 2014). Certainly, the complete avoidance of ionizing radiation is increasingly important in selected patients such as pregnant or pediatric patients; for those groups, zero fluoroscopic ablation would be necessary. Nowadays many centers perform catheter ablation without fluoroscopy for the benefit of having no radiation exposure in routine procedures (Tseng et al. 2019; Walsh et al, 2018). Thus, it does not need to be restricted to pregnant or pediatric cases.

An AP ablation procedure can also be performed using only a 3D electroanatomic mapping system. In the present case, even though TTE and ICE are not routinely required for the procedure, we additionally used TTE and ICE. At the beginning of the procedure, we punctured the right femoral vein and blindly (without fluoroscopy) inserted a guidewire through the inferior vena cava up to the RA. At that moment, TTE was very useful to identify the appropriate placement of the guidewire and catheter. It is also possible to advance the wire and catheter under the guidance of an electrical signal because the roadway from the right femoral vein to the IVC is relatively straight. However, there is a probability of a venous anomaly or catheter malposition at times. We think ICE has some added value in 3D mapping. We needed the RA geometry to get a better idea of the orientation and anatomy. In that situation, the ICE was helpful. However, the RA geometry could be acquired using fast anatomical mapping (FAM). Unfortunately, the FAM acquired using the ablation catheter was not suitable for the delicate ablation in the present case (Fig. 5A). So, we chose ICE. ICE could also visualize the appropriate contact with the endocardium, which could make the procedure more efficient. ICE and TTE might not definitely be essential, but, they could assist in providing an efficient procedure.

We here report the present case of WPW syndrome during an early period of pregnancy in a woman who had an AP successfully ablated without any fluoroscopy. Even during the early period of pregnancy, catheter ablation might be performed safely using a 3D catheter navigation system and/or ICE without radiation exposure, and therefore, it could be considered as a therapeutic option in pregnant women.

The study was approved by the ethics committee at Chonnam National University Hospital, Gwangju, Korea (CNUH-2020-154), after an informed consent from the patient.

The authors declare no conflicts of interest