According to the European Society of Cardiology Guidelines for the management of infective endocarditis, the incidence of embolic complications in untreated infective endocarditis (IE) was high between 20-50% and decreased after antibiotic therapy to 6-21% (Habib et al., 2015). Among these, coronary artery septic embolization (CASE) occurred in only 3.5% of all systemic embolizations in a study of more than 600 patients (Habib et al., 2015). Only several cases of coronary complications in IE treated with different therapies are mentioned in the literature including medical, surgical, transcatheter, and hybrid interventions for both the infected valve and the coronary embolization (Perera et al., 2000; Hunter et al., 2001). Although rare, CASE can have devastating consequences, but adequate treatment strategies may have better results.

We present a case of mitral valve endocarditis (MVE) and hypertrophic cardiomyopathy that was complicated with acute left anterior descending coronary artery (LAD) occlusion by a vegetation fragment. This was treated with a hybrid transcatheter and cardiac surgical strategy. Additionally, we review the literature on infective endocarditis and coronary artery septic embolization.

A 52 year-old female patient with no medical history other than treated hypertension was admitted to a district general hospital with symptoms of heart failure including fatigue, low physical tolerance, dyspnea, and recurrent fever. On physical examination, the patient was alert and relatively well without dyspnea at rest. She had a systolic murmur in the mitral area. On ECG, the patient was in sinus rhythm with signs of left ventricular hypertrophy. The transthoracic echocardiography (TTE) raised suspicion of mitral valve endocarditis along with significant left ventricular hypertrophy (LVH) and subaortic stenosis.

The patient was transferred to the university hospital for further investigations and treatment. the haemocultures were positive for Staphylococcus Aureus, therefore intravenous Vancomycin and Gentamycin was started based on pathogen sensibility. A transesophageal echocardiography (TEE) was performed, which revealed multiple mobile 8-10 mm vegetations on both leaflets of the mitral valve, moderate to severe mitral regurgitation (MR), and systolic anterior movement of the anterior leaflet (SAM) consistent with hypertrophic cardiomyopathy (HCM). There were smaller (7-8 mm) mobile vegetations on the subaortic septum. The subvalvular gradient was 103 mm Hg (Fig. 1). Based on the dimensions and mobility of the vegetations, the decision was made to perform urgent surgical intervention: mitral valve replacement combined with septal myectomy. While the patient was transferred to the ward, she developed chest pain, profuse perspiration and hypotension. The ECG showed 2-5 mm ST segment elevation from V2 to V5 (Fig. 2). 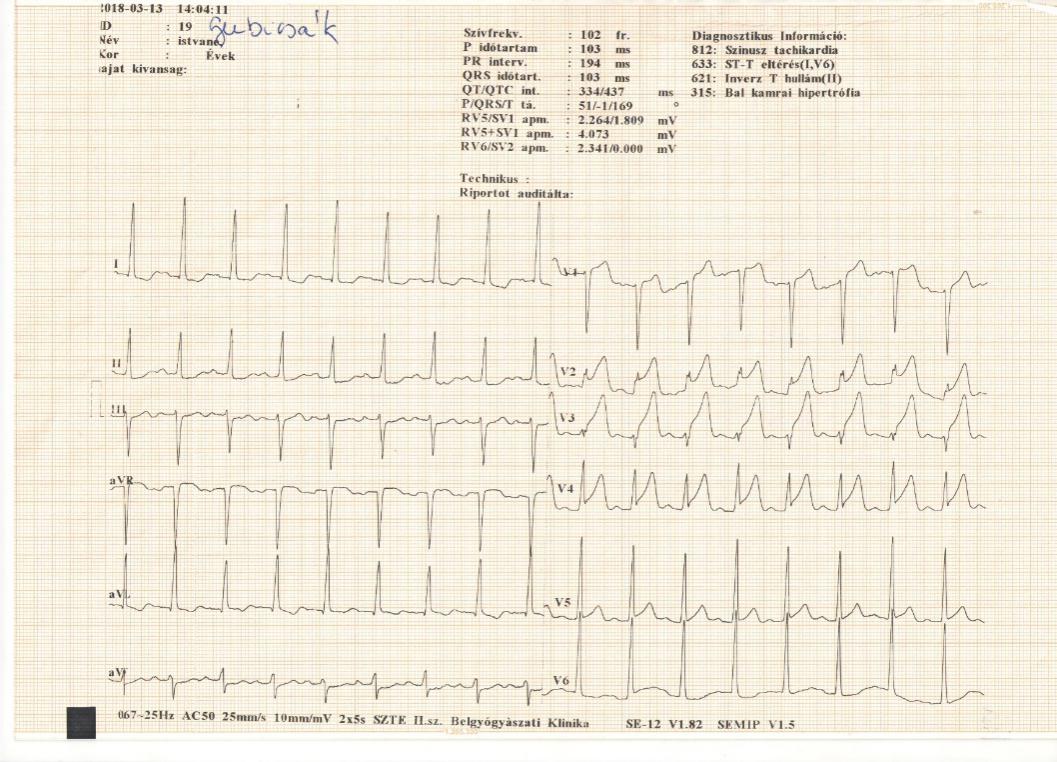 Coronary angiography after embolus aspiration. The flow in the LAD is reestablished.

During surgery, the infected mitral valve and chordae were removed and a septal myectomy was performed using a biological prosthetic mitral valve size 29 with interrupted pledgeted sutures. (Fig. 5). The postoperative period was uneventful. The microbiological results showed infected vegetation with Staphylococcus lugdunensis and Propionibacterium acnes, which were sensitive to the initiated antibiotic treatment.

The histopathological examination of the mitral valve showed signs of IE (Fig. 6). The coronary aspirate confirmed the suspicion of embolism with a vegetation fragment without bacterial cloud (Fig. 7). The patient was discharged from ITU on postoperative day 2, and to the district general hospital on day 12 for further intravenous antibiotic therapy. The postoperative TTE showed a well-functioning prosthetic mitral valve, left ventricular function, and a nonsignificant subvalvular peak gradient (Fig. 8). Coronary artery embolization in infective endocarditis is a rare, but serious complication with high mortality rates. Three studies evaluated more than 500 patients showed an incidence of CASE in IE between 0.31% and 0.51% among all cases of IE and 1.5% to 3.5% among patients with embolic events (Fabri et al., 2015; Manzano et al., 2007; Thuny et al., 2005) (Table 1).

Table 1 Studies on larger patient cohorts show a low incidence of coronary septic embolization in infective endocarditis, even among patients with embolic events.

Coronary thromboembolic events in patients with bacteremia, with or without infective endocarditis were mentioned in literature since the mid-19th century. These findings were mostly postmortem, but not always clearly documented as septic embolization (Menzies, 1961; Brunson, 1953). The case presented in 2000 by Perera et al was a postmortem finding of a LAD occlusion by a septic embolus in an aortic valve endocarditis (Perera et al., 2000). Since then, several cases were reported, which were treated conservatively with antibiotic therapy, where neither the valve, nor the coronary occlusion were addressed, or with coronary transcatheter intervention for the acute coronary syndrome, without resolving the source of embolization. These strategies also proved to have high mortality rates (Hunter et al., 2001; Maqsood et al., 2014). Surgical intervention was feasibly performed for both valve replacement and coronary revascularization, but the procedure was technically more challenging due to difficulties in finding an appropriate site for coronary grafting (Baek et al., 2008).

Although complex, the case presented with MVE, HOCM and LAD embolization had a straightforward post intervention course due to an early, successful transcatheter myocardial revascularization with aspiration thrombembolectomy followed by a combined mitral valve replacement and septal myectomy. The hybrid approach used in patients with CASE in IE was also reported by other authors in a few case presentations with similar success (Maqsood et al., 2014; Fiedler et al., 2017).

In this case, the small mobile vegetation that adhered to the subaortic septum at the mitral anterior leaflet touched the septal endocardium due to the systolic anterior movement. Intraoperatively, this was not present suggesting that this was the source of embolization. Both the European Society of Cardiology and European Association for Cardio-Thoracic Surgery IE guidelines consider a class I B indication for early surgical intervention the presence of mobile vegetation larger than 10 mm. However in this case, the presence of multiple, highly mobile smaller vegetations, after an embolic event was considered a clear indication for surgery.

Neither the American nor the European IE guidelines mention coronary embolization as a possible complication of infective endocarditis most probably due to its low incidence (Habib et al., 2015; Mohananey et al., 2018; Baddour et al., 2015). However, the devastating effects of an ACS in a severe clinical setting of infective endocarditis requires specific cardiological and cardiac surgical interventions. This alone makes this case worth mentioning in the IE guidelines as a separate entity. The successful hybrid treatment of such complications, mentioned in multiple case reports including ours suggests that the transcatheter aspiration thrombembolectomy followed by emergent surgical intervention to address the infected valve might be the strategy of choice for this type of pathology.

Based on this case and other presented in the literature, we consider the hybrid trancatheter coronary embolus aspiration followed by surgical intervention a successful strategy in infective endocarditis complicated with coronary artery septic embolization.

Our opinion is that coronary embolization could be mentioned as a complication of infective endocarditis in future guidelines with the hybrid intervention as the therapy of choice. Larger studies may be necessary to confirm this theory.