Hemorrhagic cystitis (HC) is a life-threatening complication following bone marrow transplantation and post-chemotherapy treatment. HC is caused by toxic effect of chemotherapeutic metabolites and/or by urinary viral infection attacking the urothelial surface [1,4]. The incidence of HC ranges from 34-60% [1,2]; young patients and those having allogeneic bone marrow transplantation are more prone to suffer from HC. The latter occurs within a week to 4 months from the onset of treatment. Several methods are used to prevent and treat HC but despite appropriate prevention measures, this devastating complication is inevitable in one third to more than half of the patients. When HC occurs, conservative treatment is preferable but in severe unresponsive bleeding, surgical intervention may be required. Despite accurate prevention and treatment, HC has a high mortality rate of up to 4% [2,5]. Indwelling catheter causing bladder perforation is a rare, life-threatening complication [10]. HC patients suffer from extensive inflammatory involvement of the bladder wall, and because of the bleeding, they have clot retention, bladder spasm, and continuous bladder irrigation, all of which elevate intravesical pressure and may expose them to the danger of bladder wall perforation [1,3].

Due to the prevalence of high dose chemotherapy and bone marrow transplantation, the prevalence of HC increased, and thus physicians must be aware of this life-threatening complication and the way to prevent and treat it. Herein, we present a rare case of bladder perforation in a 14-year-old male patient with HC along with a short review of the literature as well as a suggested treatment scheme.

A 14-year-old male was admitted to the oncology service for high dose chemotherapy including cyclophosphamide before allogeneic bone marrow transplantation for the treatment of T-cell lymphoma. The patient also received Mesna to decrease the risk of cyclophosphamide toxicity. It should be emphasized that Mesna, an organosulfur compound, undergoes concentration in the bladder where the urotoxic cyclophosphamide metabolite acrolein accumulates, thereby forming a conjugate with acrolein and other urotoxic metabolites, hence preventing their bladder toxicity. A week after transplantation, the patient developed macroscopic hematuria, and one day later he suffered from urinary retention. Conservative treatment with Intermittent Catheterization and fluid infusion failed. Blood tests revealed increased serum creatinine levels up to 160 mmol/L. Ultrasonography (US) showed hydroureteronephrosis with large blood clot in the bladder. The bladder was then manually irrigated, and after clots were evacuated, a double-lumen catheter was inserted for continuous irrigation. Thereafter, blood tests showed normalization of serum creatinine levels and resolution of the hydroureteronephorsis. On the next day, the patient developed abdominal discomfort, thus the irrigation was immediately stopped and CT scan and cystography (Fig. 1) were performed and an intraperitoneal bladder perforation was diagnosed. Explorative laparotomy was then conducted, revealing a small perforation on bladder dome which was primarily closed, and a 22 Fr. Malecot suprapubic drainage was inserted. As the patient continued to bleed, the bladder was gently irrigated and 5 days after the surgery we started with daily instillation of 50 ml of 0.5 mg Prostaglandin E1 into the bladder for 60 minutes once a day for 7 days [2]. During this treatment, the urine gradually cleared, and on postoperative day 14, the suprapubic catheter was removed following normal cystography. 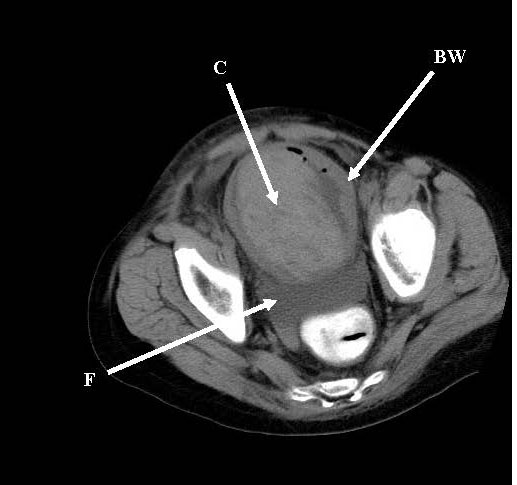 Herein we reported on a 14-years-old patient following bone marrow transplantation with HC. Cyclophosphamide toxicity and viral infection are the dominant deferential diagnoses. Cyclophosphamide is metabolized in the liver to acrolein, which is then excreted in the urine [5-7]. Acrolein, which concentrates in the bladder, is capable of penetrating the glycosaminoglycan layer and it is directly toxic to the urothelium [3,5-7]. The fact that HC develops in patients who did not receive cyclophosphamide as well as in patients treated appropriately with Mesna, led to the discovery of viral urinary tract infection with cytomegalovirus (CMV) and BK viruses in immunosuppressed patients [4,5]. Acrolein and viral infection cause bladder wall edema, thickening of the bladder wall, with mucosal bulging into the lumen, decreased bladder capacity and severe bleeding.

Prevention of HC is crucial and the preventive measures include: hydration and diuresis, keeping urinary output at 2-3 times higher than normal used to dilute acrolein concentration in the urinary tract and Mesna (sodium 2-mercaptoethan sulfonate) [5-7]. This latter molecule detoxifies acrolein by forming water-soluble non-toxic inert substance, which is excreted in the urine. Mesna is given at half or equal dose to cyclophosphamide [5,6]. Despite accurate prevention, HC will develop in 7-23% of the patients, probably due to urinary viral infection [4,6,7]. Appearance of HC demands the immediate reaction of a multidisciplinary team including urologist, oncologist, hematologist and radiologist. Herein we propose our revised scheme to treat life-threatening HC (Fig. 2). Recommended actions when HC developed are: Algorithm for the Treatment of Hemorrhagic Cystitis.

The patients should be evaluated with serial blood counts, and given blood products as needed. Kidney function should be closely monitored by serum creatinine levels and US [8,9]. The patient should be over hydrated to accomplish a good diuresis, which should be limited in cases of cardiac disease. In case of severe bleeding, clots in the collecting system or retention and obstruction, we recommend cystoscopy evacuation as the bladder wall is edematous and friable. Blood clots should be removed from the bladder in order to stop the vicious cycle of clotting and obstruction. As the bladder wall is edematous and inflamed by the toxic metabolite as well as viral infection, cystoscopy clot evacuation is much safer and will prevent bladder rupture as happened during non-visualized evacuation in our case. Isolated catheter-related bladder rupture can rarely happen, even in non-inflamed urinary bladders, due to urinary retention with elevated bladder pressure [10]. HC patients might be more prone to bladder rupture due to the extensive inflammatory process of bladder wall, recurrent clot retention and bladder spasm which highly elevate intravesical pressure and bladder wall tension. Continuous bladder irrigation can also contribute to elevated hydrostatic pressure within the bladder cavity. Physicians must be aware of this unique situation. Daily physical examination, accurate recording of irrigation fluids and anticholinergic treatment to suppress uninhibited contractions should be considered. Bladder perforation should be considered in the differential diagnosis of HC patients complaining about abdominal discomfort or acute abdominal pain. We do not recommend any attempt to search for any bleeding source or to use coagulation at that point. If the hematuria continues despite conservative treatments, an intravesical treatment should be considered. Several drugs are available for that indication:

Intravesical prostaglandins: Several trials with prostaglandin E1, E2, F2 were previously described [11-14]. These prostaglandins promote smooth muscle contraction, capillary vasospasm, increase local hemostasis, and some hypothesize that with the same mechanism of usage in stomach ulceration, prostaglandins may help to rebuild the bladder mucous layer. Systemic absorption of prostaglandins might increase glomerular filtration rate and diuresis. Side effects from the usage of prostaglandins are bladder spasm and patient discomfort, which are easily treated with analgesia and antispasmodics. As the use of prostaglandins is associated with more than 50% success rate and as this is a nondestructive agent we use it as first line drug to treat HC [11-14].

If the patient continues to bleed, several other intravesical drugs are available and their administration order should be given according to the side effects and related morbidity. Those drugs usually cause tissue destruction which demands special precautions and sometimes anesthesia.

Intravesical alum: the alum is given as 1% solution by continuous irrigation. It causes protein precipitation in the urothelium and over bleeding surface and thus promotes clotting and cessation of bleeding. Protein precipitation promotes clotting but the blood clots might also cause ureteral and catheter obstruction leading to urinary retention, infections and acute renal failure hence mandating invasive intervention. Alum use does not relate to pain and discomfort and does not require anesthesia [15].

Intravesical formalin: the contact between formalin and viable tissue causes tissue protein coagulation and capillary obstruction. As formalin causes extensive tissue damage, vesicoureteral reflux should be ruled out prior to its usage, patient anesthesia is mandated due to severe pain. A solution of 2-5% formalin is instilled initially to the bladder; in case of failure, formalin concentration can be increased to 5-10%. The extensive coagulation might cause bladder wall edema and scaring leading to ureteral obstruction and renal failure; changes in the ureterovesical junction may also cause the development of de novo reflux. The use of formalin is associated with 2.2% mortality rate while using 5% solution as well as 5.7% mortality rate when using a 10% formalin solution. The high mortality rate might be attributed to the severity of bleeding, the need for anesthesia, as well as catheter related infections [16-18].

Hyperbaric oxygen: Hyperbaric oxygen (HO) given in a pressure chamber was reported as an effective treatment of HC. The mechanism by which HO affects the urinary tract is not completely understood, although the hypothesis attributes its effect to neo-angiogenesis of more stable capillaries with less tendency to rupture and bleed. Like prostaglandins, HO is a non-destructive treatment, and is not associated with damage to normal tissue occurring with alum, silver nitrate and formalin. However, the treatment is expensive, the number of treatment cycles cannot be predicted for an individual patient, and it is logistically complicated to transfer a critically ill patient to a center with a pressure chamber. Pneumothorax, emphysema, convulsive disorder, inner ear and sinuses problems are some of the contraindication for treatment in pressure chamber [19-21].

Estrogens: Miller et al., [22] gave estrogens to 7 critically ill patients with HC and was able to stop the bleeding in 6 patients. Estrogens were given orally at a dose of 2.5 mg twice a day for 7 days and were chosen due to the high-risk state of that group of patients, which could not benefit from any other treatment besides oral drugs. Estrogens reduce capillary break and blood leakage. Estrogens also promote clotting. Short-term usage is not associated with cardiovascular side effects. The main advantage of estrogens is their oral route of administration. There is not enough data in the medical literature about this treatment in HC.

3.2 Invasive and surgical procedures in HC

Ureteral obstruction may need invasive intervention and percutaneous drainage. Emergency partial or total cystectomy were described in life-threatening bleeding. The need for surgical intervention to stop bleeding is associated with poor prognosis with a 50% mortality rate [23-27].

HC is a common devastating life-threatening complication of bone marrow transplantation and cyclophosphamide-based chemotherapy. Thus, treatment with cyclophosphamide and bone marrow transplantation mandate preventive therapy but physicians should be aware of the fact that despite measures to prevent it, HC might be inevitable. Development of HC mandates immediate reaction and cooperation between the medical services. Bladder perforation is a rare but life-threatening complication, patients with severe HC, especially with recurrent clot retention, and uninhibited bladder contraction and those under continuous bladder irrigation should be monitored meticulously. Patients who had HC should undergo long term follow up as they are at risk for recurrent HC, bladder wall fibrosis and urothelial malignant transformation. Herein we presented our suggested scheme for the treatment of HC.

All subjects gave their informed consent for inclusion before they participated in the study.

The study was conducted in accordance with the Declaration of Helsinki, and the protocol was approved by the Ethics Committee of Bani Zion Medical Center (approval number: BNZ-0049-10).