Uterus sparing technique for adenomyosis has become widely performed with advances in surgical techniques, without severe postoperative complications and studies have reported that it is effective for symptom control [1, 2, 3]. However, there is little data on the definitive relationship between conservative surgical treatment and pregnancy complications after an adenomyomectomy such as contractility of the uterus, placental abnormalities or effects on the fetus. The main concern of these complications is uterine rupture, which is one of the catastrophic complications that can occur during pregnancy after the surgery because the excised amount of myometrial tissue and scars can affect the elasticity of the myometrium during pregnancy. Additionally, there is no consensus on antenatal care or how to manage women with a history of uterine surgery, especially in cases of conservative surgery for adenomyosis, because there are few reports of antenatal, intra- or postpartum care and fetal outcomes in pregnant women after an adenomyomectomy.

To avoid the serious and fatal complications of pregnancy related to an adenomyomectomy, the collection and analysis of fatal uterine ruptures are needed. We report our case of uterine rupture in a pregnant woman after complex treatments for uterine adenomyosis.

This case was approved by the institutional review board of Nowon Eulji Medical Center of Eulji University of Korea. The patient provided informed consent for the publication of her clinical and imaging data. A 34-year-old nulliparous woman with abdominal discomfort at 27 weeks of gestation visited our clinic. She had a history of adenomyosis refractory to the medical treatment and recieved high-intensity focused ultrasound (HIFU) treatment eight years ago and robotic adenomyomectomy at another hospital two years ago due to remaining uterine adenomyosis after HIFU treatment. The patient received in vitro fertilization and embryo transfer (IVF-ET), which resulted in a missed abortion. Both dilatation and curettage procedures for missed conception tissues at other hospitals failed due to the distorted passage of the endometrial cavity, which caused continuous uterine bleeding.

At that time, to resolve both the missed abortion and recurrent adenomyosis in the patient with a strong desire to have a baby, we decided to perform our adenomyomectomy technique with transient occlusion of the uterine arteries (TOUA) [7, 8]. After incision was made, the bilateral uterine arteries were isolated and reversible clamps were applied for bleeding control during excising the adenomyosis and clamps were removed after suturing of the uterus. A longitudinal incision was made to the uterus until the endometrium was exposed, showing the remnants of conception adhered to the endometrium and invasion of the myometrium (Fig. 1). After excision of the conception tissue and the invaded myometrium, an adenomyotic lesion was excised between the endometrium and the serosa, conserving the lateral blood flow to the uterus. The weight of the excised adenomyosis was 220 g and conception tissue was 25 g. Uteroplasty was performed along the previous incision site.

Image of the specimen during surgery. (a) Conception tissue inside the uterus (arrow) with a distorted uterine cavity. (b) Excised specimen of conceptual tissue.

After three months of gonadotropin-releasing hormone injections, the patient tried in vitro fertilization at the time of four months after the surgery and succeeded in conceiving. In the first trimester, screening was done by two sequential serum tests at 11 and 16 weeks of gestation. There were no abnormal findings on level II ultrasonography in the second trimester.

The patient visited the hospital because of abdominal discomfort without regular uterine contractions and described focal tenderness on her right side at 27 weeks of gestation. Fetal heartbeat monitoring showed moderate variability over an hour. However, during continuous monitoring, the pain was aggravated and fetal variability became continuous with recurrent sharp deceleration (Fig. 2). On the ultrasonogram of the tender area, focal fluid collection was found outside the myometrium (Fig. 3). Under the impression of uterine wall dehiscence or rupture, an emergency cesarean delivery was performed. A 5 7 cm area of dehiscence at the right anterior portion of the uterine wall was noted after the peritoneum was opened and the amniotic membrane was exposed through the window of the uterine wall without membrane rupture. Slight blood-tinged fluid was detected around the ruptured site and adhesion was also found between the posterior peritoneum and the uterus. However, anterior wall was almost clear without adhesion and ruptured site of the uterus was extended by using bandage scissors and the fetus was delivered through that. After delivery of the baby, the uterus was conserved. 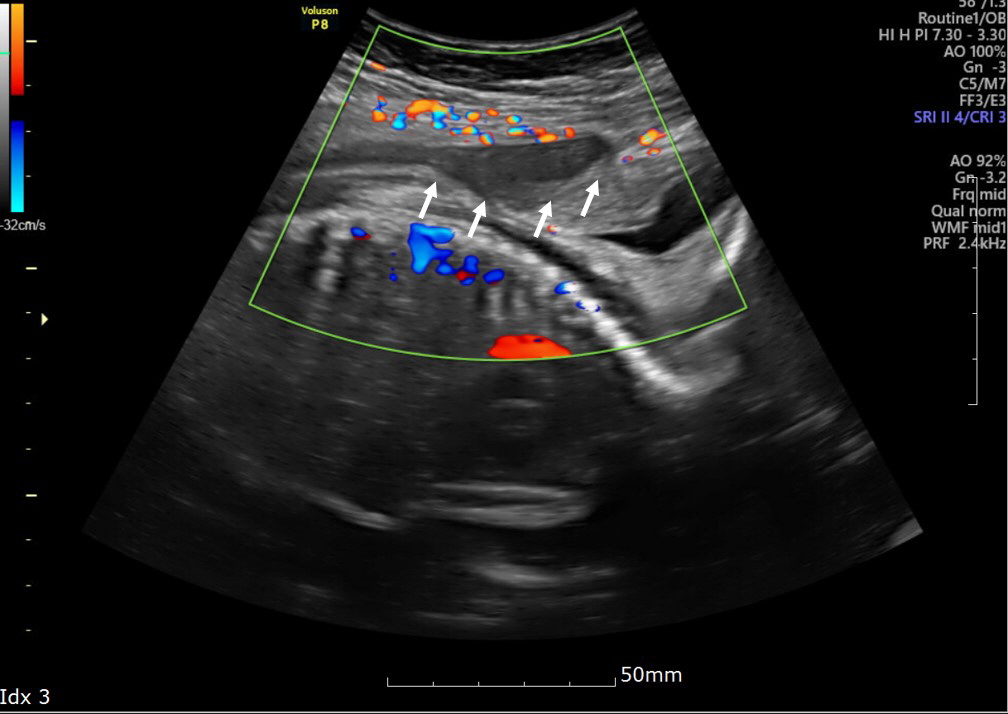 The baby weighed 1.1 kg at birth and intubation was needed. Three cycles of surfactant were used because of respiratory distress syndrome. After a month, the tracheal tube was extubated and O saturation provided by an oxygen hood was in the normal range. Serial echography was performed and there was no definite lesion in the regular follow-up brain ultrasonogram.

Uterine rupture is one of the catastrophic complications of pregnancy. The risk of rupture could be related to prior uterine surgery. Though there have been several reports of uterine ruptures during pregnancy after conservative surgery for adenomyosis, the definitive mechanism and cause of uterine rupture during pregnancy have not been well elucidated. Recently, more interest in conservative surgery for uterine adenomyosis as a technique to preserve fertility has been shown and the rates of this type of surgery have gradually increased. Because adenomyomectomy is the latest procedure, there is no specific guidelines for antenatal care for a pregnancy after an adenomyomectomy and there is not much information on how to avoid this catastrophic complication.

Our practice to transiently occlude the uterine arteries can prevent overuse of electrocoagulation that induces thermal damage to the myometrium. Because irreversible myometrial damage could risk expanding the failure point and the dehiscence point of the uterus during pregnancy, we use a cold knife for cutting and excision. For bleeding control, we used bipolar type electrocautery for small vessels and sutures with minimal electrocauterization. Also, restoring the flow to the transiently occluded uterine arteries maintained the original vascular architecture in the uterus and minimized the ischemic area due to the operative interruption of uterine blood flow. We previously reported the successful outcome of a twin pregnancy after a TOUA adenomyomectomy without uterine rupture or dehiscence [1, 2].

However, in this case, the patient had various risk factors because of the previous surgical treatment and HIFU at another hospital that could destroy the myometrial structure. At her last adenomyomectomy at our clinic, despite recurrent trials at two different hospitals, abortus could not be removed by an evacuation and curettage procedure due to the deformed uterus and surgery revealed the destroyed and grossly scarred myometrium.

HIFU was introduced in China in the 1990s by concentrating ultrasound waves at the desired location using an external source of energy to induce thermal ablation as a noninvasive therapeutic strategy [9]. HIFU has become a uterine-sparing option for the treatment of leiomyomas and has also recently been applied to the treatment of adenomyosis [10, 11]. However, there are concerns for future fertility because of damage to the adjacent endometrial lining and serosa when the energy accumulating within the lesion is excessive or the treatment duration is prolonged [12].

Otsubo et al. [3] reported the relationship between uterine wall thickness and uterine rupture during the pregnancy of the women with a history of an adenomyomectomy. In the present case, we measured the patient’s uterine wall thickness by ultrasonography at each visit. The mean wall thickness of the anterior uterine wall was 7 mm and the thinnest point was 5 mm at her last visit at 25 weeks of gestation. To prevent spontaneous rupture without labor, shorter follow-up intervals for uterine environment evaluation, especially measuring the wall-thickness, could be helpful during the second and third trimester. Also, because the posterior wall of the uterus cannot be measured well by ultrasonography due to limitations of depth, MRI without gadolinium enhancement can be an option in patients with a high risk of uterine rupture during pregnancy. Further studies need to be conducted on measurement methods, measuring points, and the ranges of calculations for risk evaluation.

In addition to revise surgical technique to maintain uterine structure, particular attention is needed to contemplate how to manage pregnant women who have history of adenomyomectomy to avoid pregnancy complications. To date, among the 30 deliveries of pregnancies in patients who received TOUA adenomyomectomies at our clinic, this was the first report of uterine rupture. Usually, we use 3 months of GnRH agonist to prevent menstruation flow and it makes convalescence period. The patients who received adenomyomectomy have experience of ineffective hormonal treatments or severe side effects to the medical treatments so that they are already exhausted for further treatments. In this case the patient was be pregnant four months after the surgery. Regarding her past history of uterine procedures, it might be considered a short interval. There could be controversies of adequate conception intervals after adenomyomectomy. In case of uterine myomectomy, some studies suggested a period between 2 and 12 weeks, 12 months or others claimed that there is no safe interval [13, 14, 15, 16, 17]. What we learned from this case is that longer interval of pregnancy would be safer.

How to deal with risks is more important than risk assessment. To avoid a catastrophic rupture, we suggest the close measuring of the uterine wall, especially at the surgical site of the uterus, with short follow-up intervals during the late second and third trimesters of pregnancy in women after an adenomyomectomy. This monitoring enables us to identify the exact time for a safe delivery. Also, when preparing childbearing after adenomyomectomy, precise counseling should be provided about risk of uterine rupture and postoperative contraception interval.

This case was approved by the institutional review board of Nowon Eulji Medical Center of Eulji University of Korea (EMCS 2019-08-015). The patient provided informed consent for the publication of her clinical and imaging data.

Image of the specimen during surgery. (a) Conception tissue inside the uterus (arrow) with a distorted uterine cavity. (b) Excised specimen of conceptual tissue.