Cytomegalovirus (CMV) is the most common pathogen in transplacental infection during pregnancy and subsequent congenital anomalies in both developed and developing countries. Congenital CMV (cCMV) infection in trans-placentally-infected infants can only be diagnosed in the first few weeks of birth because newborns develop CMV antibodies due to infection with harmless CMV through breastfeeding. Thus, neonatal urine and saliva specimens are usually tested for CMV DNA. Symptoms at birth in patients with severe cCMV infection include hepatosplenomegaly, petechia, pneumonia, retinitis, small-for-gestational-age, cerebral calcification, and ventriculomegaly [1]. Complications, such as abnormal fetal heart rate patterns or fetal distress, during delivery have been reported in patients with severe symptomatic cCMV infection [2]. Moreover, the presence of persistent or late-onset neurological symptoms after birth has been observed in both patients with severe symptomatic and those with asymptomatic cCMV infection at birth. Among the neurological symptoms, sensorineural hearing loss (SNHL) is considered the most common. cCMV infection is the most prevalent cause of congenital SNHL at birth in 8–21% of patients [1].

Universal newborn hearing screening (UNHS) is performed for the early detection of congenital SNHL. The otoacoustic emission test is considered to have inferior sensitivity compared with the automated auditory brain-stem response (AABR) test [3]. Approximately 4–5 of 1000 neonates fail in the UNHS (using AABR test) and have to be sent to the otorhinolaryngologists for further examinations of congenital hearing loss, while the remaining pass based on the UNHS. Approximately 50% of those sent to the otorhinolaryngologists are diagnosed with congenital SNHL after further examinations [4]. In addition to the otoacoustic emission or AABR test in UNHS, auditory brain-stem response and auditory steady-state response tests, as well as temporal bone computed tomography, are used to perform detailed examinations for congenital SNHL [5]. Patients with symptomatic cCMV infection with SNHL at birth can be detected by UNHS. However, nearly 15% of children with asymptomatic cCMV infection develop SNHL later in life and, therefore, remain undetected according to the UNHS [6]. Minami et al. [7] reported a high risk of missing patients with cCMV infection with SNHL in UNHS (13 of 44 patients with cCMV infection passed UNHS bilaterally).

Maternal CMV antibody screening can be performed to identify women with primary CMV infection during pregnancy with a high risk of subsequent cCMV infection. In maternal antibody screening, CMV-specific immunoglobulin (Ig) G and IgM antibodies and IgG avidities are measured in pregnant mothers. Some previous studies have reported on maternal primary CMV infection in Japan, including ours [8, 9, 10, 11]. In these reports, low CMV IgG avidity or IgG seroconversion to positive results was found in all pregnant women with primary CMV infection. Even in mothers with CMV IgG seroconversion during pregnancy, with the highest rate of in-utero CMV transmission, the rate of cCMV infection in infants is nearly half.

In Mie, Japan, UNHS (using the AABR test) is performed at about 4 days after birth (the first hearing screening) among almost all neonates, except when the mothers do not wish to accept that the test be performed. We prospectively enrolled neonates with referral results in the first hearing screening at each obstetrical institution in Mie, Japan and collected their fresh urine samples during the first week after birth. We performed a real-time polymerase chain reaction analysis to detect CMV DNA from the samples at Mie University Hospital in Mie, Japan, as previously described [9, 10]. Infants with 200 copies/mL of CMV DNA in fresh urine samples were diagnosed with cCMV infection. In patients with cCMV infection, additional viral isolation and subunit analysis of CMV glycoprotein B were performed using the CMV DNA-positive urine samples at the National Hospital Organization Mie National Hospital in Mie, Japan, as previously described [12].

While the urine tests were being performed, the second hearing screening was being performed in neonates with the first hearing screening referral results on the same day or the next day after that. Patients who were diagnosed with or without cCMV infection, but had the second hearing screening referral results, were sent to the otorhinolaryngologists for further examination of congenital hearing loss, comprising auditory brain-stem response and auditory steady-state response tests, as well as temporal bone computed tomography. Congenital hearing loss was diagnosed within the first 3 months of their birth, whereby the audiological test results were abnormal. Even in patients with congenital hearing loss and cCMV infection, the temporal bone computed tomography test was performed to identify bony malformations as a cause of SNHL.

We have been conducting maternal CMV antibody screening at 24 obstetrical institutions in Mie, Japan since 2013 as part of the “Cytomegalovirus in Mother and Infant-Engaged Virus Serology (CMieV)” program. In this program, all pregnant women are screened for CMV IgG and IgM antibodies (Denka Company Limited, Tokyo, Japan) during early pregnancy. We also conducted CMV IgG antibody avidity tests in pregnant women with positive CMV IgG and IgM antibody results. IgG antibody avidity tests were performed at Aisenkai Nichinan Hospital in Miyazaki, Japan, as previously described [9, 13]. Alternatively, we repeated the tests for CMV IgG and IgM antibodies during the late pregnancy in pregnant women with negative CMV IgG antibody results during the early pregnancy. We considered the results as follows: low CMV IgG avidity or IgG seroconversion, positive IgG and negative IgM, high IgG avidity, and no IgG seroconversion as maternal primary infection, a past infection, non-primary infection, and no infection (uninfected), respectively.

During September 2013–March 2021, 98 neonates with referral results in UNHS (the first hearing screening) at 15 obstetrical institutions (1 university hospital, 4 general hospitals, 3 private hospitals, and 7 private clinics) in Mie, Japan, were enrolled and fresh urine samples were collected. The median number of gestational weeks at birth was 38 (range: 25–41) weeks, and the median birth weight was 3039 (range: 534–4453) g. The admission rate in the neonatal intensive care unit was 31.6% (31 of 98 patients). Thirty-nine and 59 patients had bilateral and unilateral referral results in the first hearing screening, respectively. Of the 98 patients, 93 were not diagnosed with cCMV infection. Among the 93 patients not diagnosed with cCMV infection, 87 showed positive results in the second hearing screening performed on the same day as the first hearing screening or the subsequent day, and they were sent to the otorhinolaryngologists. We obtained the otorhinolaryngologists’ detailed examination results for congenital hearing loss for 53 of the 87 patients. Of the 53 patients, 36 were diagnosed with congenital hearing loss (Fig. 1 and Supplementary Table 1). 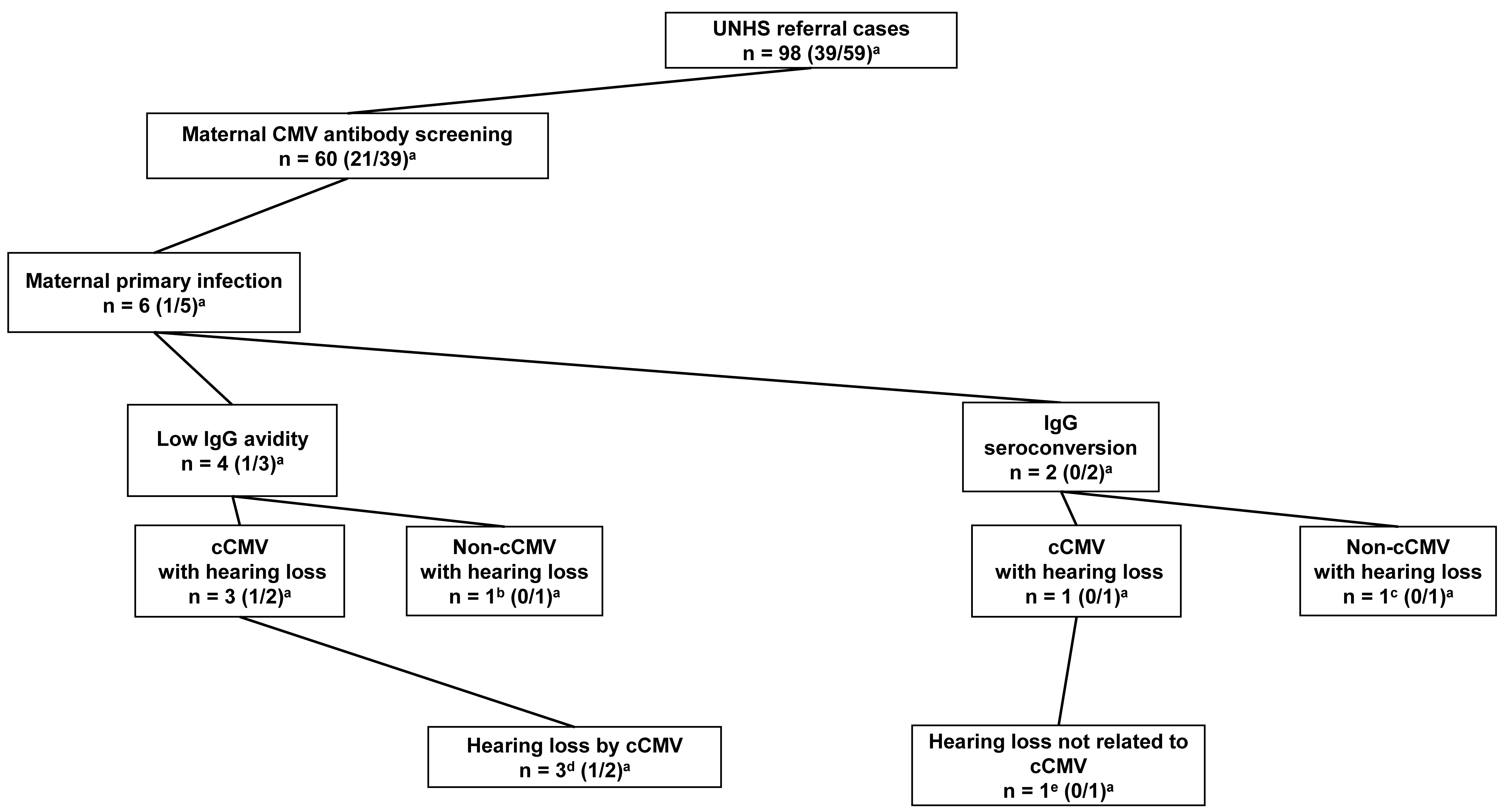 CMV is the most common viral cause of mother-to-fetus infections, affecting approximately 1% of all live births worldwide, with a prevalence of 0.6–0.7% in developed countries [6]. Congenital hearing loss onset in patients with cCMV infection often occurs after the neonatal period and is therefore not detected by UNHS. The incidence rates of cCMV detected in UNHS referral patients have been reported in previous studies, ranging from 0.9% to 5.0% [14, 15, 16, 17, 18, 19]. Stehel et al. [16] reported an incidence rate of 5.0% (24 of 483 patients), which was closest to that (5.1%) of the current study. The differences in the incidence rates may be attributed to the study population and admission rate in neonatal intensive care units. The rate of neonatal intensive care unit admission affects the detection of congenital hearing loss in UNHS referral patients [6], and the incidence rate of cCMV infection in UNHS referral patients would likely vary according to the study population to some extent. Although the admission rate in this study was nearly one-third of the total, no further comparisons could be made with the previous studies. This needs to be addressed in further studies.

Herein, we performed a prospective enrollment study of neonatal patients who had referral results in UNHS. Therefore, since there was no enrollment at the time of undergoing UNHS, the exact number and clinical characteristics of neonates who underwent UNHS could not be reported. However, in another study of pregnant women (cytomegalovirus antibodies), along with those included in this study, the number of pregnant women enrolled during the same study period was 44628. Therefore, we assume that approximately the same number of neonates received UNHS. Assuming that approximately 4–5 of 1000 neonates failed at the UNHS [4], about twice as many neonates as the 98 patients in this study would have been considered to have had referral results. The reason for this small number of patients with referral results would be that, UNHS was not performed when mothers did not wish to receive the test, because some patients were sent to the otorhinolaryngologists even after obtaining UNHS referral results without enrollment in this study and their urine samples were not collected. Moreover, in the assessment of the incidence rate of cCMV infection in UNHS referral patients, selection bias to an extent might be present in this study population. We performed neonatal CMV DNA tests from urine samples in all UNHS referral patients; however, we were not able to obtain all of the corresponding CMV antibody screening results from the mothers. Thus, although we identified the incidence rate of cCMV infection among all UNHS referral patients, we showed the incidence rate of maternal primary CMV infection in a limited number of patients (60 of 98 mothers). This could also contribute to a selection bias in this study.

This prospective cohort study was conducted in accordance with the Declaration of Helsinki. We obtained ethical approval (No. 2610) from the Clinical Research Ethics Review Committee of the Mie University Hospital and obtained informed consent from all participants’ mothers.

We appreciate all institutions that partook in the maternal CMV antibody screening program in Mie, Japan, “Cytomegalovirus in Mother and infant-engaged Virus serology (CMieV)” program. Our expressed gratitude goes to the members of the Mie Association of Obstetricians and Gynecologists (A. Terada and Y. Tamaishi) for facilitating collection of neonatal urine samples in UNHS “refer” patients and the directors of that (H. Obata, K. Kanamaru, Y. Kamimoto, T. Kikukawa, T. Takakura, H. Tanaka, K. Nagao, S. Nii, K. Nishimura, Y. Maegawa, T. Maezawa, and H. Minoura) for facilitating the CMieV program. We also thank M. Nakamura and E. Teramoto (Mie University Hospital) for their help with the real-time PCR tests and M. Negoro (Mie National Hospital) for her help conducting the viral isolation tests and subunit analysis of CMV glycoprotein B.