Caesarean delivery (CD) is the most common obstetric surgical procedure and the most frequent abdominal surgery performed worldwide. One-third of women in the United States deliver by caesarean section [1]. In 2020 the incidence of CD in Italy was 31.2% (CeDAP, Italian Birth Assistance Certificate 2020), varying from 19.6% in the autonomous province of Trento to 50% in the region Campania.

In the United States, the incidence of repeated caesarean delivery is about 86.7%, and only 13.3% of women choose to deliver with vaginal birth after Caesarean section [2].

The incidence of iatrogenic bladder injury during CD varies from 0.0016% up to 0.94% [5]. Risks factors include: emergency and/or repeated CD, adhesions – primarily adhesions between the bladder and lower uterine segment -, uterine rupture, and attempted vaginal birth after CD [6]. During primary CD the incidence of bladder injury is about 0.2%, while in case of repeated CD is about 0.6% [5] and the higher the number of previous caesarean deliveries the higher is the risk of iatrogenic bladder complications. Short-term effects of bladder injuries include extended operation time, prolonged catheterization, and urinary infections.

Nevertheless, there is a lack of data regarding long-term adverse outcome following bladder injuries during CD and their consequences on lower urinary tract dysfunctions (LUTDs).

Urinary incontinence is defined as the complaint of any involuntary loss of urine and is the predominant urinary dysfunction reported by women.

Data about urinary incontinence in patients who had run into bladder injuries during CD is scarce. The few existing studies report a prevalence varying from 8.5% up to 10.5% [7].

We reported a retrospective analysis of data collected in our first level Obstetrics Department with approximately 1200 deliveries per year, in a University Hospital in Milan, Italy.

All records of women undergoing CD between 1st January 2010 and 31st December 2020 were screened.

Data were collected throughout the electronic clinical database of our Department, which comprehend data about patients’ history, pregnancy and delivery, obstetric outcome, and any complications.

Only patients who gave birth with cesarean section (either elective or emergent) were analyzed. Records in which iatrogenic bladder injury had been reported, were selected as study population, and patients were contacted for a telephone interview during 2021.

During the interviews, patients were asked to answer questions from the Italian validation of the International Consultation Incontinence Questionnaire Short-Form (ICIQ-SF) to investigate frequency, severity and the impact of incontinence on their quality of life. The board of the San Paolo hospital department of health sciences approved the study protocol. Data were collected anonymously and reported at aggregate level according to Italian law.

Data were entered into the database by one author and double-checked by one other author. Descriptive statistics were reported as absolute numbers with percentages for categorical variables and as median for continuous ones.

To identify a suitable corpus of relevant studies for the review, we performed a systematic literature search on PubMed, Scopus, International Scientific Indexing (ISI), Web of Science, Cochrane up to November 28, 2021 using a combination of keywords and text words represented by “Caesarean” and “bladder injury”, “bladder damage”, “urinary scar”, and “incontinence”, “urinary symptoms”. The systematic search of literature provided a total of 61 results. Fig. 1 illustrates the review process. We excluded 7 duplicates. 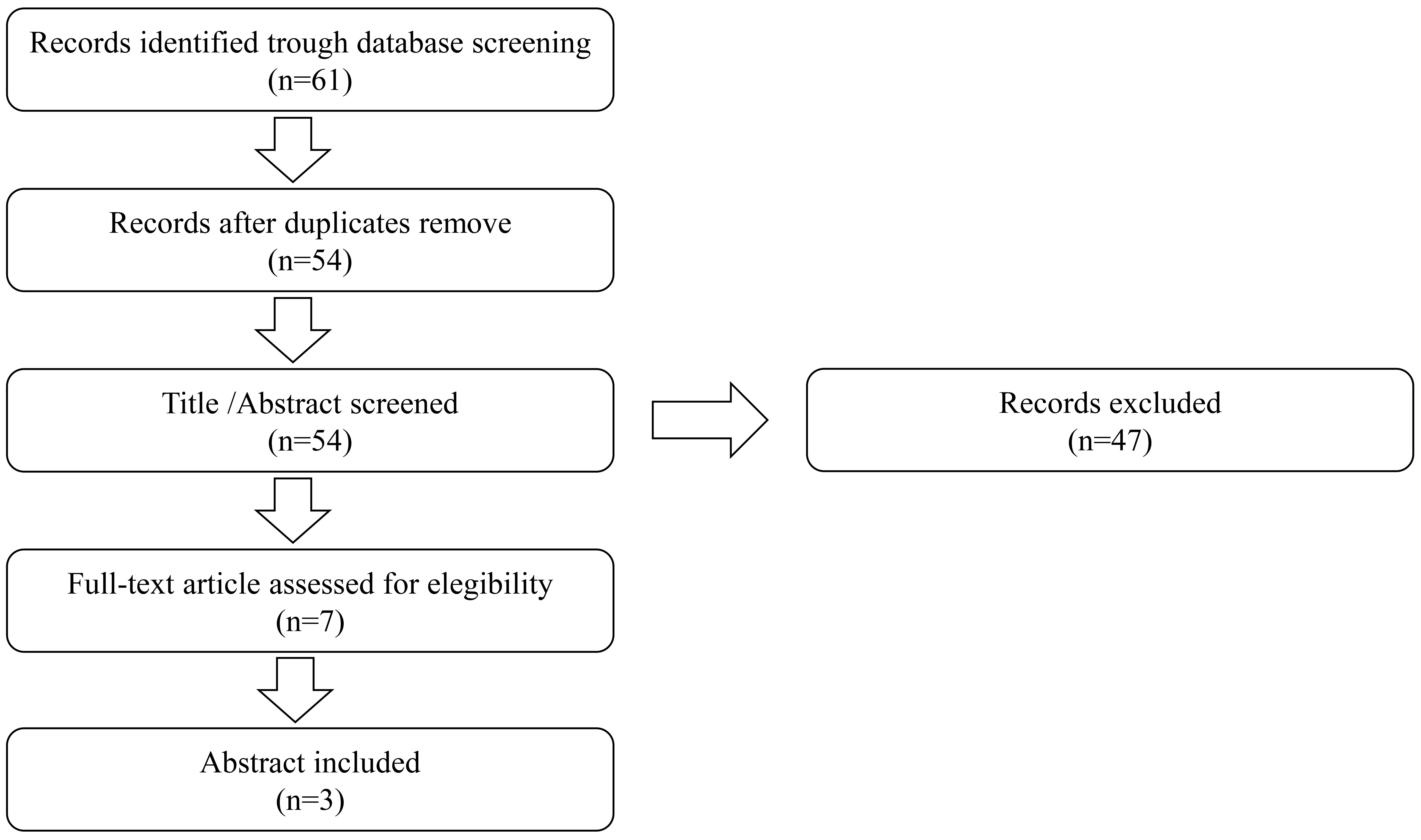 Flowchart to illustrate the review process.

Titles and abstracts were screened by two reviewers (M.C. and S.M.), and 48 results were not relevant for the review according to this screening. We consider only papers published after 1994 in English language. We also performed a manual search to include additional relevant articles, using the reference lists of key articles. Once identified, full texts of seven records recommended by reviewers were analyzed independently by the same two reviewers and assessed for inclusion in the systematic review. Four out of seven results were excluded because they did not address the research question. Three studies, published from 2017 until November 2021, were incorporated in the review: two of them are case series, and one is a retrospective study on 106 patients.

The systematic review was conducted and reported according to the PRISMA Statement for Reporting Systematic Reviews and Meta-Analyses [8].

Data selection and extraction were conducted in accordance with PICOS (population, intervention, comparison, outcome, study type) using a piloted form specifically designed for capturing information on study and characteristics. Data were extracted independently by 2 authors to ensure accuracy and consistency.

Throughout the obstetrics database of our Department we screened 3725 caesarean deliveries performed from 1st January 2010 until 31st December 2020. We identified 16 patients with iatrogenic bladder injury, with an overall incidence of 0.43%.

Table 1.Characteristics of the population.
Table 2.Number of previous CD.

None of the bladder injuries occurred during a complementary hysterectomy for placenta accreta.

All injuries had been recognized intraoperatively and promptly managed by an expert operator. The damage had been repaired with two layers running 3–0 delayed absorbable suture: the first layer comprising the bladder mucosa, the second one comprising the submucosa and muscular layer. Patients were dismissed with indwell urinary catheter which was removed 10 days after surgery.

The rate of repeated CD was higher than the number of primary CD both for the paper by Naicker and the one by Salaman, respectively 88.2% and 90.1%. Nevertheless, the incidence of emergent surgery was 76.5% (13 patients) for the former and 39.5% (32 patients) for the latter.

In patients falling into bladder injury during caesarean section with no hysterectomy.

The role of iatrogenic bladder injury in the development of female urinary incontinence is an understudied issue, probably due to the extremely low incidence and the need for large population database.

With a single center retrospective analysis we outlined the epidemiological aspects of this clinical condition.

In our population the incidence of bladder injuries associated with CD was 0.43%, in accordance with data reported by literature (0.05–0.47%) [6, 11]. Most cases occurred in repeated CDs and, unexpectedly, during elective CD. This can be explained by the fact that the majority of repeated CDs are planned and this can be a critical aspect when the patients had undergone more than one previous CD.

Since this iatrogenic condition is a rare and underreported complication, there is a lack of data in the literature. Therefore, the number of studies included is, of necessity, very small, with only three papers satisfying the inclusion criteria.

In the paper by Crocetto the incidence raised up to 17%, but, in this series, all patients were admitted to Cesarean hysterectomy for placenta accreta, which is a leading cause of maternal morbidity and mortality. Moreover, in extreme cases, the placenta reaches the uterine serosa or even invades the bladder wall with a higher risk of injuries or unavoidable need to open the bladder to remove the placenta and uterus [12]. In our series no injury occurred during a complementary hysterectomy for placenta accreta. This can be related to the high attention paid in our department to these cases in which the risk of bladder injury is frequent. For this reason, most of the time these cases are ruled out by experienced surgeons. Repeated caesarean delivery can be outlined as the main risk factor for bladder injury. Previous surgery is—in fact—the most frequent cause of adhesion which can make more insidious the opening of the peritoneum or even more the vesical-uterine pouch running easily into the wrong plane [13]. This can provoke the thinning of a fibrous scar-bladder wall until a full-thickness injury occurs. In our data, we had 81% of repeated CD with a prevalence of one or two repeated CDs, in accordance with the results found in the literature. The incidence of repeated CD was 88 and 90%, in the series with no Placenta Accreta cases. When the presence of a risk for fetal wellbeing requires to perform an emergent caesarean delivery in a very short time, the combination of the two conditions (repeated CD and the need for a short operative time) act as a multiplicative factor. Even if our review includes only three papers, the incidence of UI is very different among authors. In the series of patients with placenta accreta by Crocetto, it was estimated as high as 37.5%, with the majority of them affected by mixed urinary incontinence. While in the other series it was estimated between 4.9 and 11.8%. The Authors did not report any detail about the type of incontinence. None of them reported the time lapse between CD and the rising of urinary symptoms. In our retrospective analysis, urinary incontinence after bladder injury is reported in 40% of patients, which is much more frequent than the other studies in the literature. Most of our patients (75%) developed stress urinary incontinence, while 15% reported “wet overactive bladder” symptoms.

Strengths of this study include the specific topic of the systematic review and the large single-centre database screened for the retrospective analysis. To our knowledge, this is the first systematic review analyzing the incidence of urinary incontinence associated with bladder injuries during cesarean delivery. In a current trend of progressive increase of cesarean section rate worldwide, it is of paramount importance to have information for complications associated with this type of surgery. This is even more relevant when clinicians need to counsel a woman for repeated CD. Limitations of the study are related to the small number of studies included in the literature review. Moreover, due to the high rate of patients lost at follow-up of our population, we are aware that the precise number for the incidence may vary within a confidence interval.

In conclusion, urinary incontinence may be related to iatrogenic bladder injury during cesarean section. Therefore, pelvic floor muscle training programs in a view of prevention should be taken into high consideration for these patients [14].

The authors declare no conflict of interest. SM and AMM are serving as Editorial Board members and Guest Editors of this journal. We declare that SM and AMM had no involvement in the peer review of this article and has no access to information regarding its peer review. Full responsibility for the editorial process for this article was delegated to UI.

Flowchart to illustrate the review process.