Ovarian torsion is a gynecological emergency that mostly affects adolescents and young women [1]. The rotation of an ovary around its own axis leads to biochemical and histological alterations that ultimately result in ovarian dysfunction [2]. Ovarian torsion impairs blood flow to tissues and causes ovarian ischemia. Ischemia eventually triggers the degradation of adenosine triphosphate and increases hypoxanthine. After ovarian torsion is reversed, tissues begin to receive blood flow again, and hypoxanthine is converted into superoxide anions, hydroxyl radicals, and peroxynitrite within an oxygenated environment. The phase related to torsion/detorsion damage corresponds to ovarian ischemia/reperfusion (I/R) injury [3,4]. Experimental studies have attempted to prevent oxidative damage in ovaries by using a number of anti-oxidant agents [5,6]. Additionally, various treatments, such as pre-treatment with losartan, granulocyte colony-stimulating factor, and methylene blue, have also been found to be useful [7-9].

Apocynin (4-hydroxy-3methoxy-acetophenone) is naturally found in the roots of Apocynum cannabinum (Canadian hemp) and Picrorhiza kurroa (Scrophulariaceae). This molecule inhibits NADPH oxidase, which catalyzes the synthesis of superoxide anion from oxygen [10]. It has been reported that apocynin suppresses apoptosis by decreasing myeloperoxidase activity and supporting anti-oxidant defense mechanisms in animal models of cerebral artery occlusion [11], renal I/R injury [12], and testicular torsion/detorsion damage [13].

This study aims to determine the protective effects of apocynin and melatonin in an animal model of ovarian I/R injury.

The rat ovarian I/R model was established as previously described by Ozsoy et al. [23]. Rats were starved 12 hours before laparotomy and anesthetized with 50 mg/kg ketamine hydrochloride (Ketalar, Eczacıbası, Istanbul, Turkey) and 10 mg/kg xylazine hydrochloride (Rompun, Bayer, Leverkusen, Germany). A midline incision was made in the lower abdomen. Group I rats underwent a sham operation. For the remaining groups, the left adnexa was clockwise-rotated approximately 720 degrees along with ovarian and tubal vessels. The twisted adnexa was fixed to the abdominal wall with 4/0 silk sutures. The ovary was counter-rotated to the normal position after 3 hours of torsion, and I/R injury was induced at this time.

Oxidative stress in ovarian tissue homogenates was determined by measuring the activities of SOD and CAT, as well as the levels of MDA and PC, respectively. Analyses of all samples were performed at ambient temperature. All tissues were rinsed with ice-cold isotonic saline solution and homogenized by using a homogenizer (IKA Ultra-Turrax t 25 Basic, Stanfen, Germany). After filtration and centrifugation of the homogenates, supernatants were used to determine enzymatic activities. SOD activity was specified by inhibiting the nitroblue tetrazolium (NBT) reduction, and one unit of SOD was defined as the amount of enzyme causing 50% inhibition of the NBT reduction rate [24]. Catalase (CAT) activity was specified by determining the rate constant of the HO decomposition rate at 240 nm. Both SOD and CAT activities were expressed as units per gram protein (U/g protein). The MDA level was measured by using a method that was based on the reaction of MDA with thiobarbituric acid (TBA) at 90-100 C [25]. The protein carbonyl (PC) content was measured spectrophotometrically (GBC Cintra 10 E UV/Visible Spectrophotometer, Melbourne, Australia) by reacting the carbonyl group with 2,4-dinitrophenylhydrazine to form 2,4-dinitrophenylhydrazine. Both MDA and PC levels were expressed as nanomoles per gram protein (nmol/g protein).

Histological changes were evaluated according to their severity: score 0 indicated an absence of pathological findings, and scores 1, 2, and 3 indicated an involvement of 33%, 33-66%, and 66%, respectively [26]. Total tissue damage scores were calculated using the sum of scores for follicular degeneration, hemorrhage, vascular congestion, edema, and inflammatory cell infiltration.

Evaluation of the immunohistochemical labeling was performed using H-score analysis as previously described [27]. Semi-quantitative assessments of immunoreactivity for caspase 3, Bax, and iNOS were classified as follows: 0 (no staining), 1 (weak but detectable staining), 2 (moderate or distinct staining), and 3 (intense staining). H-scores for each tissue were calculated by using the formula: H-score = Pi (i l). In this formula, ‘i’ indicated the intensity score, and ‘Pi’ indicated the percentage of corresponding cells. The percentage of cells stained in each intensity category was calculated and then multiplied by the weighted intensity of staining. The H-score value was calculated using five different areas for each section at 400 magnification, and values of each of the two sections were averaged for each animal. Two investigators, who were blinded to the type and source of the tissues, determined the percentage of cells without staining and with 1, 2 and 3 staining. The combined average score of both observers was used.

Microscopic images of histopathological findings in all groups are presented in Fig. 1. Ovaries of rats in the control group had a normal structure. However, in the I/R group, severe histopathological changes were observed. Follicular degeneration, inflammatory cell infiltration, interstitial edema, massive hemorrhage, and diffuse congestion were noted in the ovaries of rats with I/R injury. Melatonin and apocynin reversed the cellular defects in follicles and reduced hemorrhage and congestion. Histopathological findings in ovaries are given in Table 3. Tissue injury scores demonstrating follicular degeneration, inflammatory cell infiltration, edema, hemorrhage, and vascular congestion were significantly higher in the I/R group compared with the control group (P 0.001). Compared with the I/R group, melatonin and apocynin administration significantly decreased the degree of ovarian injury (P 0.01), but this decrease was more prominent in the melatonin group. 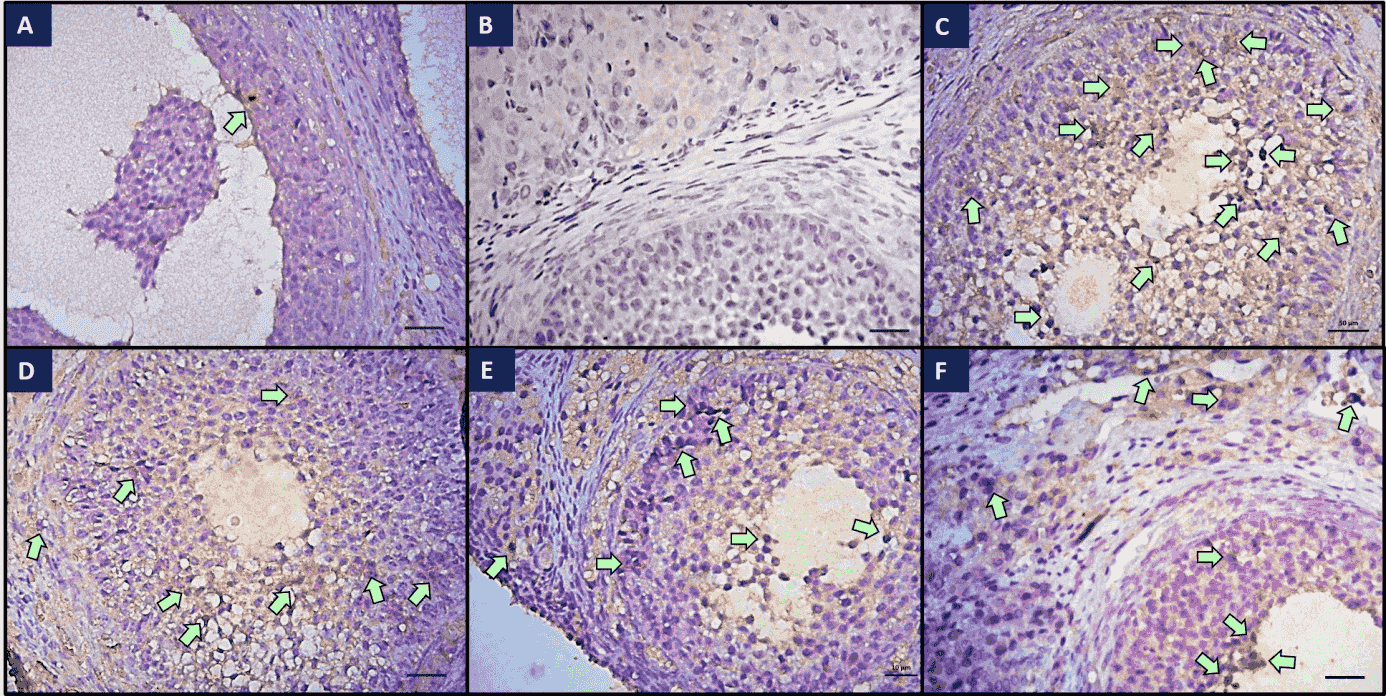 Adnexal torsion may cause permanent damage in ovaries and defects in folliculogenesis, which may eventually result in female infertility. The mechanism of injury is usually attributed to the generation of reactive oxygen species (ROS) during both ischemia and reperfusion. Thus, it would be prudent to sustain anti-oxidative defense mechanisms by using anti-oxidant agents so that ovaries can overcome ROS-mediated I/R injury after adnexal detorsion is achieved [1-4].

This study was successful in establishing an animal model of ovarian I/R injury as evidenced by increasing MDA and PC levels and decreasing SOD and CAT activities in both ovarian tissue and serum. MDA is an index of lipid peroxidation by which ROS-induced oxidative damage is monitored within tissues. On the other hand, PC is a product of protein denaturation that appears as a result of I/R injury [25]. Both SOD and CAT are anti-oxidant enzymes participating in defense mechanisms in tissues. SOD catalyzes the transformation of superoxide into HO and O, which is the first step of antioxidant defense, whereas CAT transforms HO into O and HO [24].

To date, various pharmaceuticals and chemicals have been experimentally used to eliminate the hazards of torsion related I/R injury in ovaries [3,4]. A thorough review of the literature has yielded no studies on the protective effects of apocynin and melatonin on ovarian I/R injury and, to the best of our knowledge, this is the first study to investigate the possible benefits of preoperative apocynin and melatonin treatment on I/R injury associated with surgical correction of adnexal torsion.

Apocynin inhibits the generation of ROS by blocking NADPH oxidase. This enzyme is considered to be the major source of ROS-mediated I/R injury, as activated NADPH oxidase helps to transport electrons to oxygen and subsequently produce ROS molecules. Moreover, apocynin stimulates -glutamylcysteine synthase, which synthesizes glutathione. Therefore, apocynin acts as an important anti-oxidant that protects tissues from torsion/detorsion damage [7,28].

Both low (20 mg/kg) and high (50-100 mg/kg) doses of apocynin have been used to suppress oxidative stress in renal, cerebral, and endothelial tissues [11-13]. In another study, diabetes-induced testicular damage could be effectively treated by apocynin administered at a dose of 16 mg/kg for four weeks. Low dose apocynin treatment was able to reverse all histopathological changes caused by I/R injury in testes [29]. On the other hand, a high dose of apocynin was significantly more effective in restoring biochemical and histological parameters to normal levels in testicular tissue. Both low and high doses of apocynin could trigger the spermatogenic process, which was disrupted by I/R injury [30]. In this study, two doses (10 and 20 mg/kg) of apocynin were used, and we found that these regimens were similar in terms of efficacy. Moreover, both apocynin doses significantly improved biochemical, histopathological, and immunohistochemical parameters of oxidative damage in ovaries that underwent I/R injury.

Melatonin, as a major neuroregulatory hormone, is mainly secreted from the pineal gland within the circadian rhythm. Because of its lipophilic and hydrophilic properties, melatonin can easily pass through all biological membranes, enter cells, and distribute to subcellular compartments. In this way, melatonin protects cells from oxidative damage in both lipid and aqueous environments. Furthermore, melatonin impairs leukocyte migration, inhibits leukocyte adhesion to endothelial cells, and improves blood flow in oxidative processes [21,22].

An animal study reported that the administration of melatonin caused a significant decrease in lipid peroxidation content and a significant improvement in SOD and CAT activities in testes that underwent torsion-related I/R injury. On the contrary, changes in enzyme activities of the contralateral testis were insignificant [31]. A similar Iranian study indicated that either melatonin or its combination with metformin restored SOD activity, as well as MDA and myeloperoxidase levels in rat testes that had been exposed to I/R injury. No significant difference was found between the administration of melatonin or melatonin and another compound. The beneficial effects of melatonin were also demonstrated by means of histopathological recovery [32]. As for the present study, melatonin could reverse I/R injury in terms of biochemical, histopathological, and immunohistochemical alterations in ovaries.

In conclusion, conservative detorsion surgery may not provide adequate protection to ovaries. Our results suggest that preoperative apocynin and melatonin administration can be used to protect ovaries from ROS-mediated I/R injury after adnexal detorsion is performed surgically. Both apocynin and melatonin are powerful as therapeutic anti-oxidant agents with considerable bioavailability and safety. In clinical practice, the application of apocynin and melatonin to treat I/R injury as an alternative therapeutic approach may help to rescue ovaries from subsequent subfertility after adnexal detorsion. However, these findings should be interpreted carefully as their power is limited by a relatively small study cohort and a lack of longitudinal data on fertility. The clinical availability of these compounds merits application in I/R injury studies following adnexal torsion. Further experimental animal and clinical studies are warranted to clarify the protective effects and to develop shared protocols for the clinical use (dosage, duration, method of administration) of apocynin and melatonin treatment in ovarian torsion-related I/R injury before conservative surgery.

We are grateful to Erkut Somak and Yılmaz Özcan for their contribution to the study.

All authors declare that they have no conflict of interests. This research did not receive any specific grant from funding agencies in the public, commercial, or not-for-profit sectors.