The term adnexa is derived from the Latin word “adenectere” meaning “appendage”. Adnexa refer to the anatomical area adjacent to the uterus, and contains fallopian tubes, ovary, associated vessels, ligaments, and connective tissue. Prior to the routine use of first-trimester ultrasound, adnexal masses only became clinically relevant if symptomatic or if they were large enough to be palpated on physical examination.

The reported incidence of adnexal masses in pregnancy ranges from 1 in 80 to 1 in 8,000 pregnancies [1]. Most of these adnexal masses are diagnosed incidentally at the time of dating or first trimester screening ultrasound (USS) [2]. In addition, the incidence of ovarian pathology detected at caesarean section has been reported as being 0.5% [3]. Ovarian malignancy is extremely rare during pregnancy and most of the diagnosed malignancy comprise of borderline tumours. Overall reported incidence of ovarian cancer in pregnant women varies from 0.004-0.04% [4].

Grey scale transvaginal ultrasonography with Doppler imaging is excellent and safe in diagnosing complex cysts and provide a reliable differentiation between benign and malignant etiologies. Management of adnexal mass in pregnancy depends upon the size, characteristics of the mass, and associated clinical symptoms. An adnexal mass in pregnancy can be complicated by torsion, rupture, or bleeding/infection, or labour obstruction [5]. Most of the recent studies showcase comparable safety profile with both laparoscopy and laparotomy [6].

This study was conducted in the Department of Obstetrics and Gynaecology LTMMC and LTMGH, Mumbai, a tertiary reference centre, during years 2014 to 2016.

All the cases of adnexal masses were evaluated on ultrasonography with Doppler imaging by senior radiologists for the signs for malignancy. Due to unavailability of 1.5 Tesla MRI at this institution, none of the patients were subjected to MRI. CA 125 levels were performed for all the cases. Any mass with size > 6 cm, with suspicious radiological findings, raised tumour marker or with any complications, were managed surgically. Perinatal outcome was documented, and adverse effects of the surgical management were analysed.

Most of the cases of adnexal masses in this study were diagnosed in early 2nd trimester, accounting for 40.9% (Table 1) and 29.5% were diagnosed before ten weeks of gestation, followed by 22.7% cases which were diagnosed between 21 to 30 weeks. There was only one case which was discovered incidentally during LSCS. Thus, incidental occurrence was only 2.2%

Table 1 — Gestation age at the time of diagnosis. 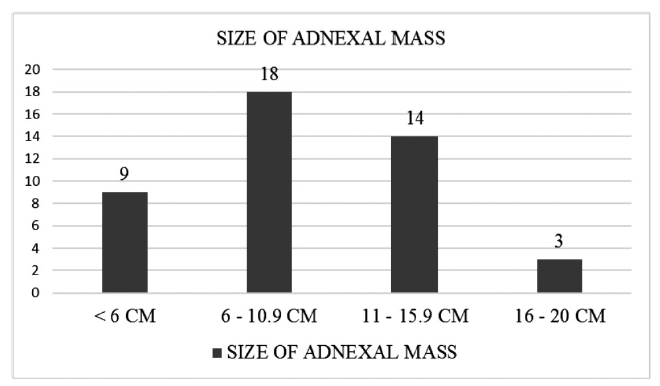 — Size of the adnexal mass.

Torsion was the most common complication seen in 15.9% of cases (Table 2). Haemorrhage was reported in two out of 44 cases. There was no cases of rupture, infection, and malignancy or obstruction in labour due the adnexal mass.

All the adnexal masses of size < 6 cm (nine) and two simple cysts of size 6.4 cm and 6.1cm were managed conservatively; 54.5% cases were operated electively and eight (18.1%) cases were treated as an emergency as they presented with acute abdomen (Figure 2). Only one case of mucinous cyst adenoma underwent oophorectomy during LSCS due to suspicion of malignancy. Almost all were open surgeries and only two (06.6%) were treated laparoscopically. 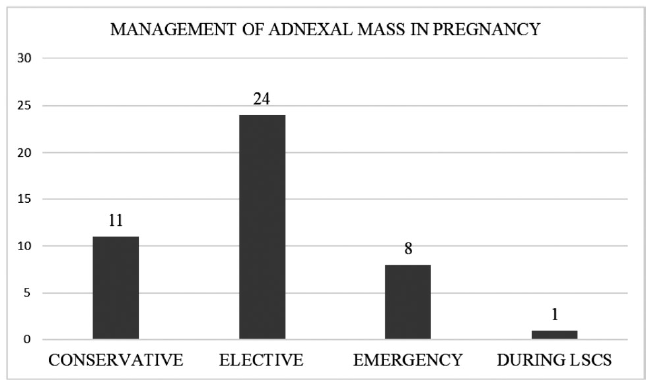 — Management of adnexal masses in pregnancy.

Table 4 shows that most of the cases of adnexal mass in pregnancy were treated in early 2nd trimester between 11- 20 weeks (60.6%); 15.1 % and 12.1% of cases were treated between 31-40 weeks and 21-30 weeks, respectively (Table 4). Three cases were posted electively in postpartum period. Only a single case was operated in 1st trimester as it presented with ovarian cyst torsion.

As shown in Table 5, 77.2% cases progressed until term, out of which 22 (50%) delivered vaginally and 12 (27.2%) underwent LSCS for obstetrics indications; seven cases (15.8%) delivered prematurely (Table 5). There were two (4.5%) abortions seen in this study. Both were seen in patient who underwent exploratory laparotomy during 11-20 weeks of pregnancy. No abortion was seen in cases operated laparoscopically. The neonatal outcome was good as there were no intrauterine foetal demise or neonatal deaths reported in this study.

The extensive literature search suggests there is an increase in the incidence of adnexal masses, which may be attributed to increased use of ultrasonography in pregnancy and increased ovulation induction causing hyperovulation syndromes, which persists in second trimester. However, the incidence was low in this study.

Most of the simple, follicular, and corpus luteal cysts regressed by the second trimester [7]. Size is the best indicator of whether the mass requires surgical intervention: 90% to 100% of masses smaller than 5 cm in diameter will resolve spontaneously [8]. If the cysts persist they often appear complex on imaging with ground glass appearance and multiple septations, increasing their likelihood of undergoing surgical management. No cases of theca lutein cysts were seen in this study. These anechoic multiloculated cysts are reported with complete mole in 10% to 15% cases [9]. Furthermore, differential diagnosis throughout pregnancy also includes the following: benign masses such as dermoid cyst (7-37% incidence), serous cystadenoma (5-28% incidence), mucinous cystadenoma, ovarian malignancy accounting for approximately 1-8% of adnexal masses in pregnancy, endometrioma, hydrosalpinx, heterotopic pregnancy, and leiomyoma with an incidence of 1-2.5% [10]. Ironically, mucinous cyst adenoma was the most common histopathological type encountered in this study.

Tumour markers have a very limited role in diagnosing adnexal masses or even differentiating the benign from the malignant ones. CA 125 a glycoprotein of coelomic epithelium origin, is elevated in first trimester. With reference to this, the cut off level are also significantly increased. Other tumour markers like lactate dehydrogenase (LDH), alpha fetoprotein (AFP), and beta human chorionic gonadotrophin (B-hCG) are also increased during pregnancy and are of limited use [11].

As most of the adnexal masses in pregnancy are benign, conservative management is advocated. The Royal College of Obstetricians and Gynaecologists (RCOG) in one of its guidelines stated: “Simple, unilateral, unilocular, ovarian cysts less than 5 cm in diameter have a low risk of malignancy. It is recommended that in the presence of a normal serum CA125, they can be managed conservatively” [12]. All the cases managed conservatively should be subjected to yearly follow up. Malignancy is highly unlikely in reproductive age group and most of the diagnosed cases are borderline tumours. A small retrospective study by Kumari et al. [13] did, however, report a malignancy rate as high as 10%.

Most of the studies published suggest that torsion is the most common complication. In the present study, torsion was seen in 15.9%. Both laparoscopy and laparotomy are safe during pregnancy. Reedy et al. [14] published a paper 1997 of 413 laparoscopic procedures performed during pregnancy for general surgical and gynaecological indications appeared to result in no higher fetal or maternal complications. A fetal loss of 10% to 25% and a preterm delivery rate of approximately 20% were reported. As only two cases were managed laparoscopically, a comparison between laparotomy and laparoscopy could not be made in this study. In general, preterm delivery rate and abortion rate were considerably low, accounting for 15.8% and 4.5%, respectively.

Adnexal masses in pregnancy can have an array of diagnosis. Majority of them are benign and resolve spontaneously. Surgical management is required for large, complex, persistent, and suspicious masses which might undergo torsion, rupture or have high risk of malignancy. The study emphasizes that both laparoscopy and laparotomy are safe in pregnancy. Removal of corpus luteal cysts early in pregnancy might require progesterone support. Patients requiring surgical management must be counselled regarding the risk of abortion and preterm delivery.

— Size of the adnexal mass.