Prostate cancer (PCa) is one of the most common cancers affecting men worldwide with an increasing incidence in most countries [1,2]. Early diagnosis and treatment of PCa can reduce metastatic disease and mortality [3]. Major efforts have been invested to improve the detection rate of clinically significant PCa, and to eventually administer the treatment of choice [4,5].

Transrectal ultrasound (TRUS)-guided prostate biopsy is the gold standard procedure for the pathological diagnosis of PCa [6,7]. The quality of the biopsy is determined by parameters like the length of biopsy core and degree of fragmentation, affecting detection rate [8-11]. It was also found that improved pre-embedding method by placing the biopsy core directly in cassettes may have some advantage if this is performed at the biopsy suite by the urologists [8]. This is mainly due to decreasing manipulation and damage to the biopsy specimen.

Poor biopsy quality may affect prognostic parameters like number of involved cores and extent of cancer in an individual core, which may affect treatment decision [12].

SmartBx™ (UC-Care Medical Systems, Yokneam, Israel) is a tool designed for the handling of prostate biopsy specimens and is intended for maximal tissue preservation as well as for accurate localization and orientation of the biopsy cores.

The main objective of the current study was to evaluate the impact of the SmartBx™ system on the detection rate of PCa.

SmartBx™ is a semiautomatic device which enables downloading the biopsy core from the biopsy needle while maintaining its unity and orientation (Fig. 1). The SmartBx™ cassette comprises a Nylon-based membrane which allows non-covalent binding with the biopsy tissue via hydrophobic and charge-based interactions. This binding does not result in any modifications to the tissue. The membrane carrying the biopsy cores is designed to go through the standard fixation and embedding processes.

The SmartBx™ needle with the gun.

The study was approved by the local ethical committee and all patients signed a written informed consent (Institutional Review Board no. BNZ-0053-11). We performed a prospective data collection for the study group which included patients with clinically suspected PCa that were referred to TRUS-guided biopsy in our hospital from 2011 to 2017. The results were compared to a control group who underwent TRUS-guided biopsy during the same years without the use of SmartBx™, and their data were collected retrospectively.

All the biopsies were performed by a single urologist and sent to the local pathology lab and managed by the same standard tissue processing, and diagnosed by the same pathologists.

The initial core length was documented on the needle notch using uEye camera (Imaging Development Systems, Obersulm, Germany), and measured again on the slide. From these measurements we calculated the percentage of biopsy tissue preservation. T-test was used to compare between continuous variables, and Chi-Square was used to compare between categorical variables. Statistically significant differences were defined as p value of < 0.05. All statistical analyses were performed using the SAS system. 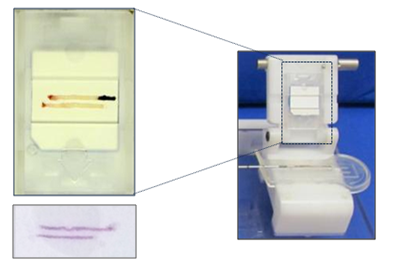 Two blopsy cores. The image on the right shows the needle crib. The left image shows two cores on a cassette.

Six-hundred patients were included in the study, 300 in each group. Table 1 shows that there were no statistically significant differences in baseline characteristics between the two groups including age, PSA, digital rectal exam and prostate volume.

Although being the gold-standard procedure for diagnosing PCa, TRUS-guided prostate biopsy has a detection rate of less than 50% [13,14]. Every effort should be invested to maximize the detection rate, including proper processing of the specimen, which have been shown to improve its quality for proper pathological examination [15,16].

In our current study, we showed that using SmartBx™ system resulted in a 1.13 mm longer core in average, and 21.2% more biopsy tissue was preserved when compared to standard biopsy. This was eventually translated into higher detection rate per core. It should be mentioned that the overall detection rate, which was higher in the study group, did not reach statistically significance, though it was nearly attained (P = 0.06). This could be explained by the fact that the standard group had more cores than the study group.

One more interesting fact was the higher proportion of GS 4 + 3 (GG III) in the study group and the higher proportion of GS 3 + 4 (GG II) in the control group. We do not know the reason for this difference, however, it could be related to the fact that the longer and better-preserved tissue in the SmartBx™ group enabled the pathologists to detect a higher proportion of Gleason pattern 4, which differentiates between GS 3 + 4 (GG II) and 4 + 3 (GG III). This is important because of the different prognosis of these two groups, which differentiates patients between favorable and unfavorable intermediate risk PCa by NCCN tables [7].

Our study has some limitations, the main of which was the fact that there was no randomization. Moreover, data on the control group was obtained retrospectively. The number of patients in each group is relatively small, and as such could miss other statistically significant differences between the groups. However, our study strength points were the facts that all the biopsies were performed by the same surgeon and all the specimens were examined by the same pathologist. Moreover, the data on the study group were collected prospectively.

The SmartBx™ needle with the gun.