Endometriosis is defined as the presence of functional endometrial glands and stroma outside the uterine cavity with features of an array of symptoms including dysmenorrhea, infertility, excessive menstrual pain, pelvic pain with defecation and chronic pelvic pain, affecting 5–10% of women of reproductive age [1, 2]. The most common locations for the ectopic endometrial implants are the ovaries, the uterosacral ligaments and the posterior cul-de-sac [3]. Diagnosis for endometriosis is solely made through surgery as no consistent biomarkers for disease diagnosis exist. The global average time of delayed diagnosis of endometriosis is 10 years [4], while it is 13 years in Chinese women [5]. Surgery combined with hormone drugs are commonly used to treat endometriosis. But the current treatments are mainly aimed at target symptoms but not the underlying mechanisms of disease. Furthermore, the overall rate of recurrence 5 years after the operation is up to 50%. The theory of transplantation for the etiology of this disease is widespread. However, the exact pathogenesis of endometriosis is still obscure [6]. With the advent of genome-wide association studies (GWAS), some loci related to endometriosis have been revealed [7, 8], which implies that gene mutations may serve a crucial purpose in the occurrence of endometriosis. Mucins are a group of high-molecular-weight glycoprotein, which can be divided into transmembrane and secretory categories. They affect the occurrence of cancer by regulating inflammation, cell adhesion or apoptosis, and can even supervise the damage and repair of epithelial cells [9, 10, 11], which is being recognized by clinical research institutes as a target for the treatment of inflammation and cancer [12, 13].

The MUC17 gene is located in the q22.1 region of the chromosome, whose full-length open reading frame transcribes 13 exons [14]. This protein has two EGF-like domains, promoting cell proliferation, migration and restraining cell apoptosis by ErbB2 mechanism [15, 16]. Previous studies have demonstrated that MUC17 is critical for the progression of breast cancer, colon cancer, cholangiocarcinoma, and pancreatic ductal adenocarcinoma [17, 18]. Particularly, evidence showed that MUC17 expression is elevated in epithelial ovarian cancer patients [19], patients with endometriosis have a higher risk of developing ovarian cancer [20]. Hence, we hypothesized that MUC17 may be the same risk factor in endometriosis as in ovarian cancer. Moreover, a study of small sample size in Taiwan province found that the MUC17 mutation was associated with the development of endometriosis. There was only one case reported so far. Therefore, we carried out a study on women in central China to ascertain the correlation between genetic variations of MUC17 and endometriosis among population in this area.

In the present case-control study, 117 endometriosis patients were enrolled at The Third Affiliated Hospital of Zhengzhou University between October 2018 and December 2019, and they were all diagnosed with histopathological examination. Participants in the controlled group were selected from unrelated patients who underwent laparoscopy or laparoscopic surgery and excluded endometriosis and adenomyosis due to hydrosalpinx, simple ovarian cyst or teratoma over the same period. All participants were native populations of Henan and surrounding provinces and not related. Those with genetic disorders in the family history, gynecological benign or malignant neoplasm, and who have taken any hormone drugs within three months were excluded. There were no statistical differences in the mean ( SD) age (32.50 6.67, 32.85 6.73 years) and the mean body mass index (BMI) (23.3 4.2, 23.9 2.9 kg/m) between the case group and the control group respectively (p 0.05). We also recorded some clinical information on patients, including dysmenorrhea, cancer antigen 125 (CA125) levels and fertility. This study was approved by The Third Affiliated Hospital of Zhengzhou University, and all participants have signed informed consent.

Combining with previously published reports, and a minor allele frequency of greater than 5% in the East Asian population, we selected rs11979706, rs10246021, rs6966570, and rs4729655 from gnomAD databases (https://macarthurlab.org/2018/10/17/gnomad-v2-1/). Genomic DNA was isolated by Genomic DNA Purification Kit (BioTeke, Biotechnology, Beijing, China) in accordance with the manufacturer’s instructions. The DNA concentration and purity were determine dusing a Nanodrop 2000 (Thermo Fisher Scientific, Waltham, MA, USA). We performed primers designing with Mass ARRAY Assay Design 3.1 Software (Agena, San Diego, California, USA). Agena Mass ARRAY RS1000 was utilized for SNP genotyping [21], and the data were analyzed using Mass ARRAY Typer 4.0 software (Agena Bioscience Inc, San Diego, California, USA). In this study, the rate of success in genotyping was above 95%. In order to confirm the robustness of the technology, we randomly chose 10% of samples for genotyping in duplicate.

To confirm the effect of MUC17 SNPs on allele-specific transcriptional regulation and chromatin structure, we used RegulomeDB [22] and HaploReg V4 [23].

The -test was adopted to evaluate Hardy–Weinberg equilibrium (HWE). Allele heterogeneity of patients and controls was determined by applying the Fisher’s exact test and the -test. The odds ratios (ORs) and 95% confidence intervals (CIs) were estimated using a logistic regression adjusted for age through the PLINK software [24]. Four Genetic models were applied to estimate the relationship between SNPs and EMs. The linkage disequilibrium (LD) coefficient r among SNPs were assessed with Haploview software [25]. The genetic effects of haplotypes were also analyzed with PLINK software. All statistical tests were with a two-sided p-value, and the threshold of p was set as 0.05.

Although RegulomeDB lacks sufficient evidence to prove that four loci affect transcription factor binding (Table 1), HaploReg predicted that rs6966570 was likely to affect Proteins bound and was related to eQTL and Motifs. Additionally, rs10246021 may influence eQTL and Motifs. The evidence of rs4729655 affecting EQTL is also available. Additionally, rs11979706 mutation can give rise to mistranslation.

The duplicate genotyping results were of 100% concordance. Firstly, as shown in Table 2, the distribution of all the genotypes was in the HWE (p 0.05). Therefore, study subjects are regionally representative. Secondly, Table 2 summarizes the alleles frequencies of the MUC17 gene among the endometriosis and the control group. The result did not show any statistically significant difference between the two groups (p 0.05), nor the genotypes analysis under each logistic regression model (codominant, dominant, recessive and additive) (p 0.05) (Table 3). Lastly, link age analysis indicated that rs11979706, rs10246021, rs6966570, and rs4729655 exhibit extremely significant linkage disequilibrium (Fig. 1). We further examined the effect of the haplotype “GGCC”, “CTTT” and “GGCT” frequencies in the development of endometriosis. Similarly, no association with EMs risk was found (p 0.05) (Table 4).

Table 2.The basic information and allele frequencies of the SNPs.
Table 3.MUC17 genotype distributions based on logistic regression model analysis in endometriosis patients and controls. 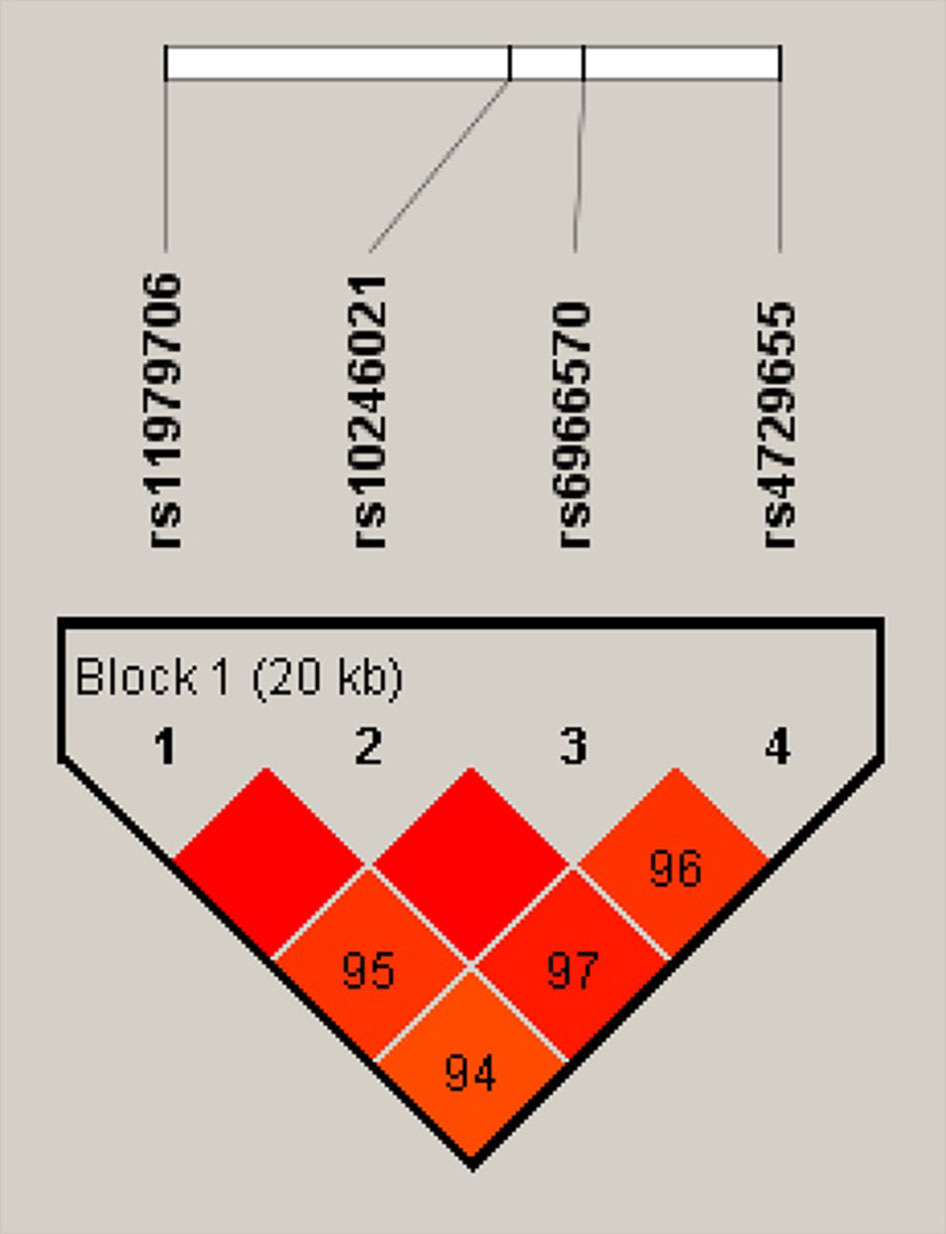 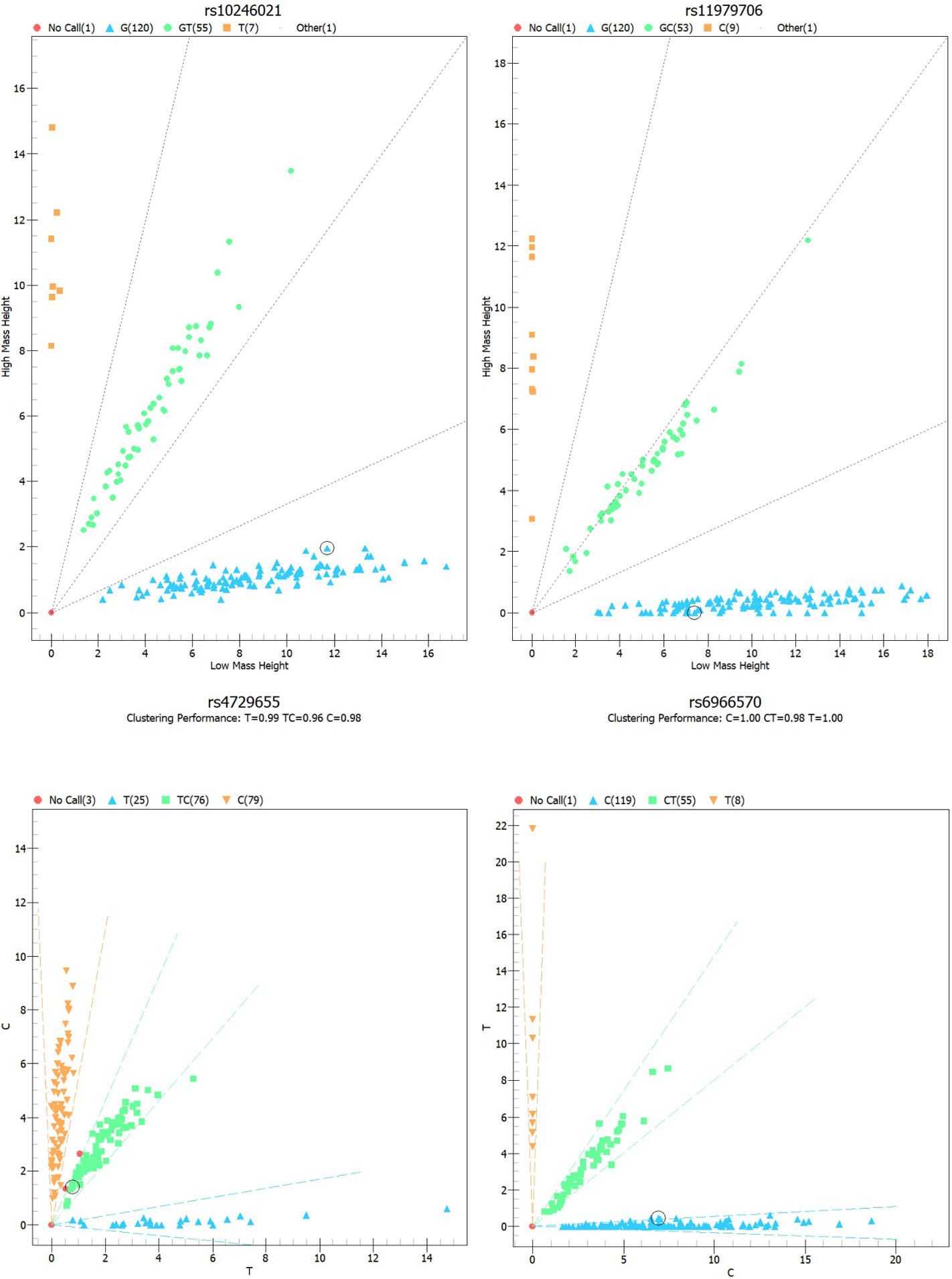 The LD (linkage disequilibrium) among 4 SNPs of the MUC17 gene that associated with dysmenorrhea in endometriosis patients. Haplotype blocks for the 26 patients without infertility and 88 patients with infertility were constructed according to the confidence interval approach using Haploview software. The values within each red square indicate the score of the related r2 measure for allelic association between SNPs. The greater the score correspond to higher degrees of LD, up to a maximum of 1.

Endometriosis is a common gynecological disease, and secondary dysmenorrhea is a typical manifestation of endometriosis. In our study, 67.8% of the patients with endometriosis had dysmenorrhea symptoms. Previous reports showed that dysmenorrhea is caused by the local inflammatory response due to the ectopic implantation of endometrial cells. This response leads to the release of inflammatory factors, promoting uterine contraction, afterwards, triggering dysmenorrhea. Yang B et al. [27] found MUC17 maintained the MYH9-p53-RhoA regulatory feedback loop through the EGF-like domain and downstream sequence, and then activated p38 signal to transduce NF-B pathway inhibiting the expression of IL1 and IL8 etc. Other studies have shown that the NF-B pathway can influence dysmenorrhea severity by modulating the expression of prostaglandin synthesis enzyme COX-2 [28]. IL1 was related to a pain effect of dysmenorrhea [29]. IL-8 is also associated with the severity of dysmenorrhea and the proliferation of endometrium stromal cells [30, 31]. Furthermore, our results suggest that the variants (rs11979706, rs10246021, rs6966570, rs4729655) of MUC17 were linked to the incidence of dysmenorrhea. In addition, bioinformatics analysis found that the rs4729655 SNP site is positioned in the 3-UTR of MUC17, and genetic variation in the 3’UTR of the target gene may affect miRNA binding and miRNA stability. Hence, we suspect that mutations at rs4729655 affect P53 or P38 pathway by regulating specifically targeted miRNA to regulate inflammatory response. Furthermore, the mutation of rs11979706 can produce missense mutation, and previous study has revealed that missense mutations in the mucin gene may affect the immune response and cell survival by creating new antigen determinants [32]. On the other hand, our study found rs11979706, rs10246021, rs6966570, and rs4729655 show strong linkage disequilibrium, and the variations of rs10246021 and rs6966570 may affect the entire haplotype to work. The above observations provide clues for us to infer that genetic element may lead to altered endometriosis-associated dysmenorrhea by affecting the expression of MUC17 protein and the release of inflammatory cytokines.

However, unfortunately, we did not discover that MUC17 (rs11979706, rs10246021, rs6966570, rs4729655) gene polymorphisms were associated with endometriosis in Central Plains Chinese women. Similar to our results, Yang C et al. [33] failed to show a correlation between rs4729655 polymorphism and the risk of endometriosis in Taiwan population either. However, they revealed the genetic variation of rs4729655 was associated with a lower risk of infertility, which was also reflected in the data we obtained, not obvious, though. As they research suggests, the rs4729655 could link to endometriosis-related infertility through regulate miR-4508 and miR-3158-3p expression. Moreover, rs11979706 also played a protector role in our study, which may work through the missense mutations and haplotype mechanisms above mentioned.

However, several limitations need consideration in our study. Endometriosis may be a disease caused by multiple factors and genes. Whether the interaction with other genes can affect the occurrence and development of endometriosis requires a lot of cellular and molecular biological evidence. Moreover, the sample size of our research is small, and whether this result can be necessarily generalizable to the whole Chinese population has yet to be confirmed by a larger cohort, multi-regional, and multi-ethnic joint research.

In conclusion, this study showed that the MUC17 gene polymorphism could not be a significant relevant factor to endometriosis in Central Plains Chinese women. Nonetheless, MUC17 SNP locis and haplotype could be potential targets of endometriosis dysmenorrhea and treatment in this population, and reference index for patients with endometriosis-induced infertility to choose in vitro fertilization (IVF). Future study should be in larger populations, in an attempt to clarify the relationship between MUC17 gene polymorphism and endometriosis, and establish the system of endometriosis cell lines research to perform functional tests to further understand the association between MUC17 locus mutation and endometriosis.

All subjects gave their informed consent for inclusion before they participated in the study. The study was conducted in accordance with the Declaration of Helsinki, and the protocol was approved by the Ethics Committee of The Third Affiliated Hospital of Zhengzhou University (Approval number: (2019) Medical ethics review NO.20).

This work was supported by National Health and Family Planning Commission of Henan Province (Grant No. 2018020215).