As a noninvasive brain stimulation technique, repetitive transcranial magnetic stimulation (rTMS) has been used broadly in patients with psychiatric disorders [1]. Its potential therapeutic value and safety for psychiatric diseases have been proven [2, 3]. Notably, obsession compulsive disorder (OCD) is characterized by obsessions, which consist of intrusive thoughts, urges or images and repetitive behaviors or metal acts [4, 5]. rTMS has been regarded as a promising noninvasive brain stimulation technique for OCD, even in patients with refractory OCD [6, 7].

Some studies suggest that OCD is attributed to dysfunction of the dorsolateral prefrontal cortex (DLPFC), media prefrontal cortex (mPFC), orbitofrontal cortex (OFC), bilateral supplementary motor area (SMA) and anterior cingulate cortex (ACC), all of which belong to the orbitofronto-striato-pallido-thalamic-circuitry pathway [8, 9]. Some studies found that rTMS located in the SMA showed good efficacy but did not achieve such an effect in the DLPFC [10, 11, 12, 13]. Currently, two recent meta-analyses have indicated that low-frequency rTMS located in the bilateral supplementary motor area has good efficacy in patients with OCD [5, 14]. For example, previous studies indicated that 1 Hz rTMS with the target of the OFC and SMA can improve refractory obsessive-compulsive symptoms [15, 16]. However, high-frequency rTMS also applied to the prefrontal cortex (PC) and anterior cingulate cortex (ACC) in patients with OCD when they did not benefit from pharmacological and cognitive behavior interventions [17, 18]. Taken together, the target regions and frequency were two key factors for the efficacy of rTMS for OCD.

It should be noted that these two diseases (OCD and TD) have a close relationship and overlap greatly in the etiology of clinical symptoms and neural correlates. For example, OCD and TD are often comorbid [19, 20, 21, 22]. Some studies found that OCD and TD overlap in many dimensions, such as phenomenological and epidemiological features [23, 24, 25, 26, 27]. This finding indicated that OCD and TD were frequently associated with clinical features and treatment. Tic disorder (TD) is a chronic neurodevelopmental disorder characterized by rapid, nonrhythmic and abrupt stereotyped movements and sounds [19, 28]. Currently, some studies have begun to pay attention to the treatments beneficial for TD and OCD, as well as the co-occurrence of OCD and TD [29, 30, 31]. Indeed, rTMS has been largely used in tic disorders with good efficacy [32, 33, 34]. For example, some studies have indicated that low-frequency rTMS targeting the SMA showed good efficacy in the treatment of tic disorders [35, 36, 37, 38]. Moreover, rTMS can also be used in treating refractory TS [39]. More studies have shown that both obsessive-compulsive disorder (OCD) and tic disorders (TDs) have obtained benefits from rTMS, especially low-frequency rTMS [5, 14, 33, 34, 40, 41, 42, 43].

However, although some studies revealed good efficacy of rTMS for OCD and TD, some other studies revealed that its effect was not much better than that of placebo [33, 34]. For example, one study suggested that low-frequency rTMS over the left or right premotor cortex had no effect on patients with TD [44, 45]. The other study for OCD suggested that 1 Hz frequency rTMS over the bilateral DLPFC was not significantly different between patients in the active group and those in the sham group [46, 47]. These studies indicated that the different frequencies with different targets might show different efficacies in OCD or TD patients. Most importantly, which target and which kind of frequency might be used in the co-occurrence of OCD and TD might need further evidence.

A previous review of rTMS elaborated its treatment for OCD or TD, but the review did not investigate both TD and OCD from a mutual comorbidity perspective. The two diseases are closely related to each other, and a review of rTMS for both TD and OCD might also provide new indications of rTMS treatment for each other, especially in patients with co-occurring OCD and TD. Therefore, we further explored the rTMS efficacy for OCD and TD and provided a quick overview of rTMS for the treatment of these two diseases.

In addition, if the change score of the active group (from baseline to the end of the treatment) was significantly higher than that of the sham group, the target was regarded as an effective target. If the Yale-Brown Obsessive Compulsive Disorder Scale (Y-BOCS) score changes between the two groups were not significantly different, the target area was regarded as useless.

3 Results
3.1 The Identification of Included Studies

We identified 238 records from the search database. After 56 duplicate studies and 95 titles and abstracts were excluded for eligibility, there were 87 records. After reading the full text, a total of 49 studies were excluded. Finally, we included 38 studies, 26 of which were about rTMS treatment for OCD, and the remaining studies were about rTMS therapy for tic disorders. The included studies involved 996 participants. Of the included studies, there were 31 RCTs and 7 open-label trials. There were 4 studies with child and adolescent patients, and the others were adult samples. There were 5 studies from China and 33 studies from foreign countries. The identification of included studies and the exclusion procedures are summarized in Fig. 1. For more details, see Fig. 1. 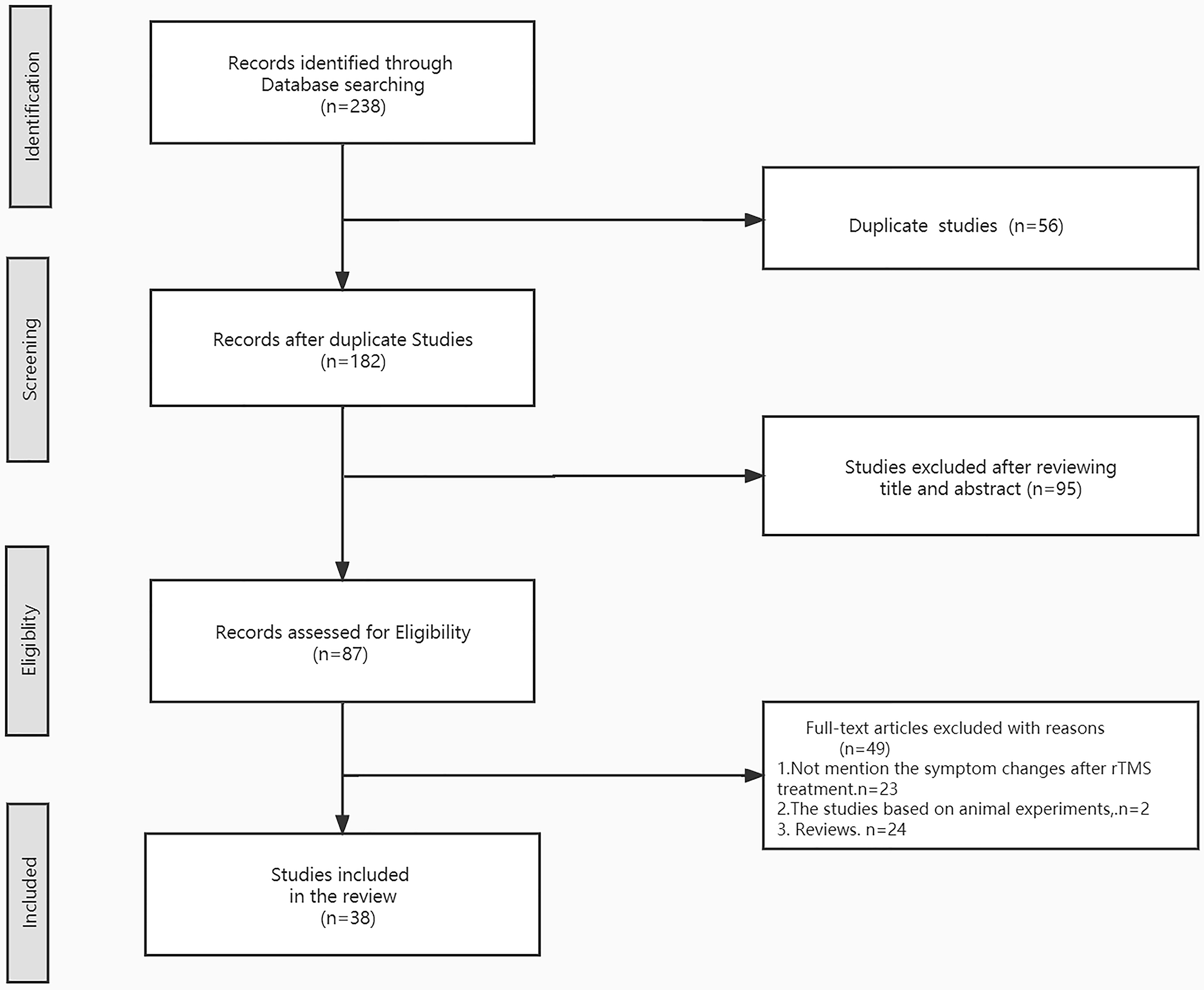 Flow diagram for this quick review.

In the OCD studies, approximately 62.5% of studies on rTMS over the SMA demonstrated good efficacy. OCD is mainly related to the dysfunctional connectivity of corticostriatal-thalamocortical circuitry, and the SMA, as an important part of the frontal cortex, plays an important role in response inhibition and motor planning [8, 57]. It seems that stimulation of other targets, such as the dorsolateral prefrontal cortex (DLPFC), may mainly improve symptoms of depression and anxiety. Low-frequency stimulation seemed to show better efficacy than high-frequency stimulation, but further evidence is needed [6]. In addition, we found that in the OCD studies, all studies suggested a treatment period of at least 1 week, mostly ranging from 2–6 weeks. Twenty studies mentioned that the effective stimuli were administered once a day, 5 days per week, and each stimulation time was 10–30 minutes. It should be noted that although the review found rTMS therapeutic benefits in patients in the OCD group, rTMS seems to be an add-on augmentation in real-world clinical practice.

rTMS treatment for TD has been developed in recent years [33]. rTMS has shown good efficacy in patients with tic disorders, even in refractory cases [39, 58]. A previous meta-analysis confirmed that low frequency was more effective in the treatment of TD [33], which is consistent with the results of our review. The rTMS targets were mainly the SMA, but other targets included the parietal cortex, motor area or premotor area [35, 45, 54, 55, 56]. The review showed that the ratio of low frequency rTMS of the SMA was often used in many studies because the SMA plays an important role in the connection of the cortical, basal ganglia, and thalamic regions, which are related to the motor circuit. In TD studies, more than half of the studies showed that the rTMS targets were SMA, and approximately 85.7% of the studies about rTMS over the SMA regions resulted in a meaningful clinical improvement. In our review, one study indicated that a participant underwent low frequency stimulation briefly for just 200 s, and tic symptoms improved [56]. In TD and OCD studies, more than half of the studies suggested effective low-frequency rTMS treatment. In the two diseases, the ratio of the low frequency rTMS over the SMA seemed to have better efficacy, but further evidence is needed.

OCD and TD are frequently associated with one another, and they are a cooccurring combination [59]. They overlap in epidemiology, etiology, and phenomenology [24, 31, 60]. People with a family history of tic disorder have a higher prevalence of OCD [61]. OCD and tic disorder share frontal-striatal circuits [62, 63, 64]. The SMA plays a critical role in the occurrence of tics and obsessive-compulsive symptoms [7, 65, 66, 67, 68, 69]. This review provides important evidence for the development of rTMS for both TD and OCD, especially for the co-occurrence of OCD and TD. In addition, rTMS is also used for children and adolescents with psychiatric diseases, such as obsessive-compulsive disorder, tic disorders, attention deficit hyperactivity disorder, autistic spectrum disorder, and depression [70, 71]. TMS has been regarded as one of the most promising noninvasive brain stimulation techniques for the treatment of pediatric disorders. We also need further evidence of the efficacy of rTMS in different age groups in future studies.

This study had three limitations. First, half of the studies about tics were not RCTs, which may have influenced the accuracy of the results. Second, the participants in the included studies were almost all adults; in the OCD studies, only one child-adolescent study was included. In future research, we will include more child-adolescent studies. Third, we did not perform a meta-analysis due to the lack of data for the included studies.

We thank all the contributions from the participants involved in the study.

Flow diagram for this quick review.