Preeclampsia is a disorder of pregnancy associated with new-onset hypertension after the 20th week of gestation (WG). As reported The American College of Obstetricians and Gynecologists hypertension and other signs or symptoms of preeclampsia may present in some women in the absence of proteinuria, although often accompanied by new-onset proteinuria [1].The preeclampsia rate in the United States is 6–8% of all pregnancies [2].

Preeclampsia is associated with an unfavorable perinatal outcome, including intrauterine fetal growth restriction (10–25%), placental abruption (1–4%), perinatal death (1–2%), oligohydramnios, and prematurity [3]. The only effective treatment is the delivery of the fetus and placenta. The decision on further expectant treatment sometimes carries the risk of life-threatening for mother and fetus. On the other hand, prematurity leads to a significant increase in neonatal morbidity and mortality [4].

Preeclampsia was associated with an increased risk for severe maternal morbidity and the risk was consistently greater for women with CS relative to those delivering vaginally [2].

There are studies that have tried to determine the value of the method of Doppler analysis of uterine arteries as a screening test for preeclampsia, but also some other pathological conditions [5,9]. Findings from study of Stampalija et al. [5] generate the hypothesis of the possible efficacy of a first trimester uterine artery Doppler abnormality to predict different clinical phenotipes of hypertensive disorders of pregnancy. Recorded “notching” and increased vascular resistance in the uterine artery is a better predictor of gestational hypertension and preeclampsia than the values of RI and PI [5,10]. However, we did not find research that determined the values of Doppler analysis as a screening method for the method of childbirth in pregnant women with preeclampsia, so we hope that our research will try to fill this gap.

This research has been conducted as prospective study at Clinic for Gynaecology and Obstetrics, University Clinical Center Tuzla, Bosnia and Herzegovina. The research included 240 pregnant women, aged 18 to 40, who were regularly controlled and recived antenatal care by their gynaecologists. The participants were divided into two groups, a experimental group and a control group. The experimental group had 120 pregnant women with preeclampsia risk factors (young primiparous women, older multiparous women, previous pregnancy with complications which were caused by preeclampsia, pregestational and gestational diabetes, prepregnancy body mass index greater than 30, thromboembolic events, thrombopilia, antiphospholipid syndrome, systemic lupus erythematosus, kidney disease, hyperemesis gravidarum, proteinuria, pregnancy from assisted reproductive technologies, hypertension in family history). The control group had 120 pregnant women, aged 18 to 40, primaparous and multiparous women, with no pregnancy risk factors, who were regularly controlled and recived antenatal care by their gyneacologists. Exclusion criteria were twins pregnancies, pregnancy with foetal anomalies and stillbirths, pregnant women in whom the increase in blood pressure occurred before the 20th weeks of gestation (WG) as well as pregnant women with chronic hypertension.

All patients were determined the WG before the ultrasound examination. All patients who were eligible for inclusion in the study were interviewed and the necessary information was collected, some of the risk factors in either personal or family history. All pregnant women from the experimental and control groups in the examined period from 20–22 WG had a sonogram of the uterine arteries with recording of the value, resistance index (RI), on the left and right uterine arteries. The technique of finding the uterine artery by Color Doppler was as follows: first the iliac artery is found laterally from the edge of the isthmic part of the uterus, then by moving the sound medially the uterine artery signal is found at an angle of 60 to 90 degrees to the iliac artery. Then we analysed the waveform, the presence or absence of an endiastolic notch and the RI is measured. We measured RI on at least three similar consecutive waveforms. Elevated RI values of the uterine arteries are considered to be RI values 0.58 [11].

Then, in the same pregnant women, after childbirth, the following parameters were analyzed: the WG at the time of delivery, the mode of onset of labor, the presence of symptoms of preeclampsia, the mode of completion of labor. The mode of onset of labor was analyzed based on whether the labor started spontaneously or it was an induced labor. The method of delivery completion (vaginal, vaginal instrumental or cesarean section) was also analyzed. Preeclampsia symptoms were analysed based on whether the pregnant woman had blood preasure higher than 140/90 mmHg, after the 20th WG and/or present particles of protein in urine (300 mg/L).

All pregnant women before the ultrasound examination signed a written consent. The survey was approved by the Ethics Committee of University Clinical Center Tuzla.

Statistical analysis of data in this research was conducted by using the standard methods and procedures of descriptive and inferential statistics. The frequencies of phenomenon were tested with test, the Odds Ratio was analised as well. When presenting numeric data, minimum and maximum values were calculated, the mean value and standard deviation as well. Statistical hypotheses which include this type of data were tested by Student’s t-test, i.e., ANOVA procedure. Statistical hypotheses were tested with the significance of 5% (p = 0.05). During elaboration process we used Epi info programs (especially Statcalc module), Excel and Arcus Quickstat biomedical. Epi info is a free program with lots of options and it is recommended by the World Health Organization [12].

Considering that the study was performed at the 20–22 WG, the mean value of the gestational age, when measuring the flow of uterine arteries in the experimental group was 20.56 (SD 1.27) by the date of the last period, similarly as in the control group where it was 20.50 (SD 0.96).

Ultrasound-determined gestational age, when measuring uterine arteries flow, did not differ significantly between the experimental 0.01 (SD 1.94) and control group 0.30 (SD 0.93). Shows the prevalence of risk factors for preeclampsia in both groups of participants. 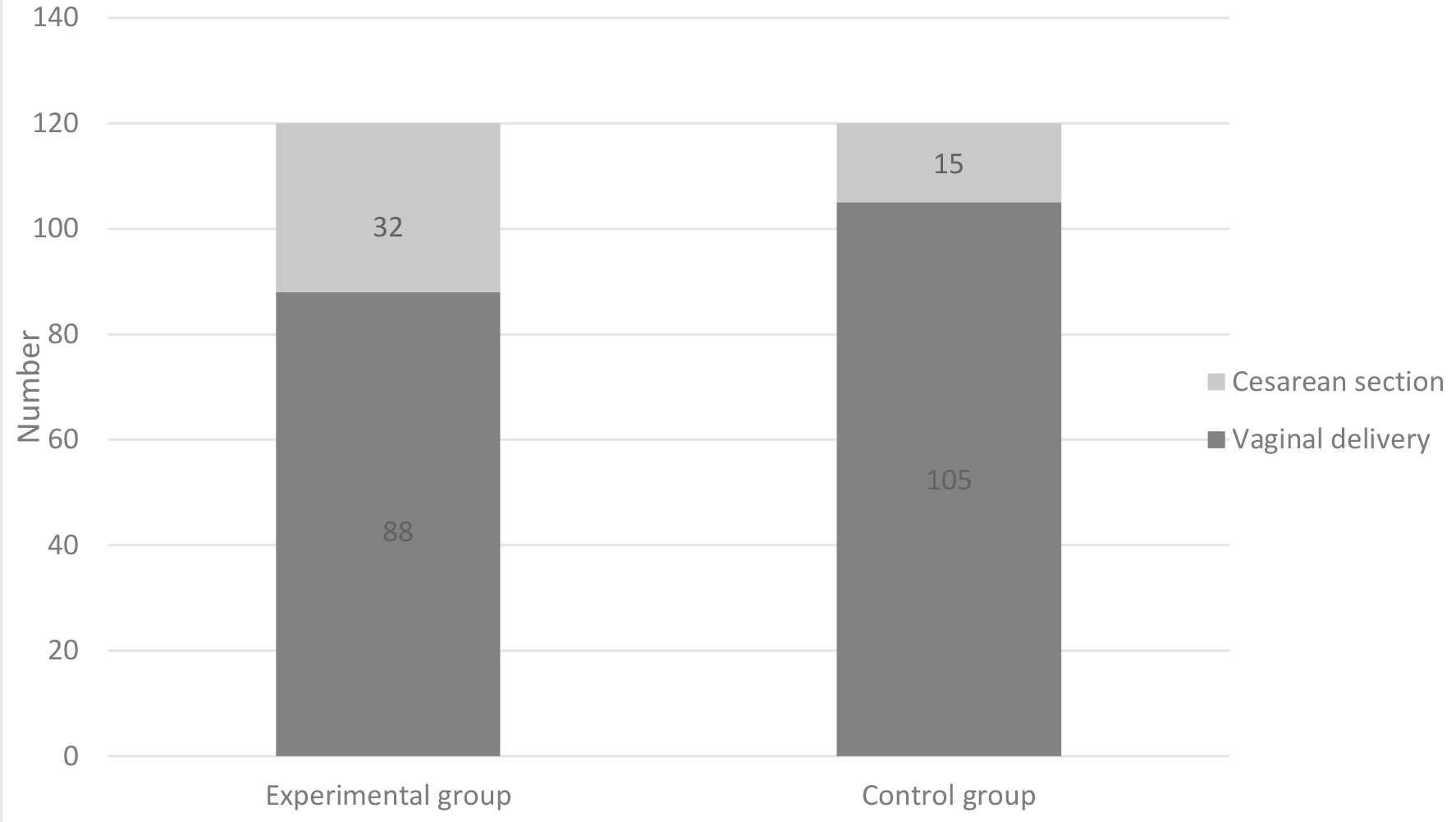 Method of delivery in both groups.

The dependence of labor completion on the RI of uterine arteries was analyzed for all subjects (combined experimental and control group). The student’s t-test did not determine a statistically significant difference in the RI of uterine blood vessels between CS and vaginally method of delivery (t = 1.19, p = 0.235). Primiparas are more prevalent in the group of pregnant women with preeclampsia in many analysed research, from 50% to 77.7%, in which range our results fit also [13-16].

In our study, it was found that there is a statistically significant association between increased resistance of uterine arteries and parity of pregnant women. The chance of developing an incerased RI of the uterine arteries is 2.42 times higher in primiparous women than in multiparous. The difference in the frequency of incerased uterine artery RI values is not random. The occurrence of hypertension in pregnancy is associated with significantly higher values of the RI of the uterine and umbilical arteries especially in primiparous women [17], which correlates with the results of our research.

In pregnant women with high-risk pregnancies, such as those with preeclampsia, delivery is usually induced prematurely and ends instrumentally or surgically in the interest of the mother and/or fetus [2]. The higher frequency of CS in the experimental group in our study is not accidental. Pregnant women with risk factors for preeclampsia are 2.54 times more likely to have CS. There was no statistically significant difference in the values of the RI of uterine arteries between pregnant women delivered by CS and those vaginally in the experimental group.

In study Boulet et al. [2] there was evidence of positive additive interaction between preeclampsia and CS, with the highest risks for severe maternal morbidity observed among women with both factors. It is crucial to educate clinicians on this association and to encourage providers to offer and encourage vaginal deliveries in this high-risk population of women [2].

In a study by Nagar et al.[21] of 500 pregnant women with some of the symptoms of preeclampsia, 30% had an emergency CS and 12% had an elective CS.

Similar results were obtained by Mashiloane et al.[23] who had 63% of pregnant women delivered by CS in severe preeclampsia, which is more than in our study. According to the same authors, delivery was induced in 37% of pregnant women, which is similar to the results of our research.

Geum et al.[8] concluded that CS in the first pregnancy is associated with an increased risk of developing preeclampsia in the second pregnancy (OR, 1.35; 95% CI, 1.09–1.67). Pregnancy complicated with preeclampsia is more likely to end in CS, stillbirth, and neonatal death [24], which agrees with the results of our study. In 2010, hypertension or preeclampsia were the reasons for 3.1–12.8% induction of delivery in New South Wels, Queensland, South Australia and Tasmania which is lower than the results of our study and 2.3–4.8% CS in Queensland and South Australia [25].

The increase in CS number has also been the result of defensive obstetrics outside the framework of good clinical practice over the past two decades.

By measuring the RI of uterine arteries, during a routine antenatal examination around 20 WG, pregnant women with an increased risk of developing preeclampsia can be detected, thus the complications that preeclampsia brings with it and also high prevalence of deliveries by CS. In our study there is no statistically significant difference in RI of experimental group when it comes to the method of delivery. The significant difference is only observed in control group.

However, in order to relate higher RI of uterine arteries in preeclampsia and the delivery by CS, numerous and much larger multicentric studies are needed to confirm or deny this thesis.

The strenght of this study is prospective nature of the study. Limitations are the relatively small number of study participants and unicentricity which affected the precision of our estimates. Our statistical analysis not included determination of Risk Ratio and multiple logistic regression to determine the adjusted risk of CS after controlling potential confounders. However our study has led to a several of interesting findings.

Cesarean section is the most commonly used surgical procedure to complete delivery in pregnant womens with risk factors for preeclampsia, which confirmed our study.

All subjects gave their informed consent for inclusion before they participated in the study. The study was conducted in accordance with the Declaration of Helsinki, and the protocol was approved by the Ethics Committee of the University Clinical Center Tuzla (approval number: 01/1-37-4-123/11).

Thanks to all the peer reviewers for their opinions and suggestions which improved the quality of our manuscript.

Shows the prevalence of risk factors for preeclampsia in both groups of participants.