X-ray pelvimetry is a digital examination to evaluate the pelvic cavity of pregnant women and is often used for the diagnosis of contracted pelvic inlet and cephalopelvic disproportion (CPD). Women who are short in stature are occasionally subjects of pelvimetry since low maternal height is assumed to correlate with contracted pelvic inlet. In East Asia, pregnant women with low height less than 150 cm are observed, and such women are evaluated by pelvimetry as a screening test for contracted inlet. Additionally, unengaged fetal head during labor regardless of effective uterine contraction suggests CPD, and pelvimetry is considered as an objective mean precisely to distinguish CPD. Such women often receive labor induction or augmentation by oxytocin after excluding CPD. In terms of CPD diagnosis, X-ray pelvimetry is very useful because of the simple and rapid examination involved.

We have perform routine X-ray pelvimetry to evaluate the pelvic cavities of all pregnant women prior to pharmacological induction/augmentation. No study has ever conducted X-ray pelvimetry on all pregnant women undergoing the induction/augmentation. In this study, we retrospectively investigated their obstetrical variables, including evaluation of the pelvic inlet (obstetrical conjugate and transverse diameter) to determine whether routine X-ray pelvimetry can identify women at risk of cesarean delivery for dystocia. Our data could provide obstetricians with a basis of for considering the indications for X-ray pelvimetry in the management of labor and delivery.

A total of 1118 pregnant women had received X-ray pelvimetry at the end of pregnancy from 2014–2017 in the Tokyo Metropolitan Otsuka Hospital. The X-ray pelvimetry was performed routinely prior to pharmaceutic and/or mechanical methods of labor induction/augmentation to negate contracted inlet or CPD. Among 1118 women who received X-ray pelvimetry, 205 women with C/S due to reasons as following were excluded; nonreassuring fetal status, twin pregnancy, maternal hypertensive disorder, breech presentation, threated uterine rupture after previous uterine surgery, and intrauterine infection. The remaining 913 were included in our analysis dividing into two groups: cesarean (n = 37) and vaginal (n = 876) delivery groups (Fig. 1). 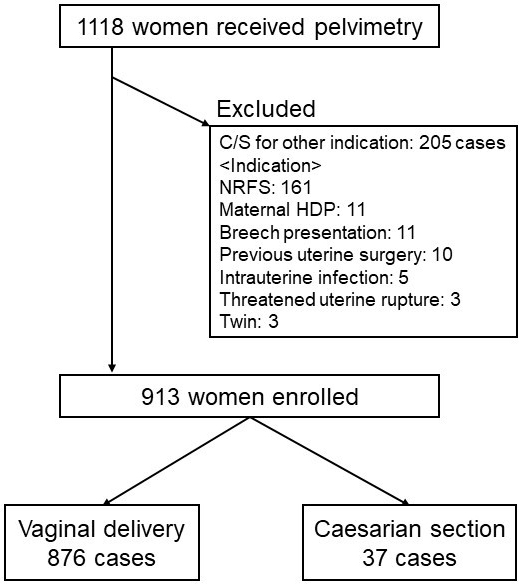 Subject of this study. Among 1118 women who received X-ray pelvimetry, 205 women with C/S due to reasons other than dystocia were excluded. The remaining 913 were divided into two groups: cesarean (n = 37) and vaginal (n = 876) delivery groups.

Patient back grounds and obstetrical and infant variables were investigated retrospectively. The data including the obstetrical conjugate and transverse diameter were collected by examining medical records. All data were anonymized and kept strictly confidential by the investigators.

Comparisons in these variables between cesarean versus vaginal delivery groups were made by the Mann-Whitney U test since the distribution of each data was non-uniform. Chi square test was also performed for categorical data. The independent risk factor for cesarean birth was analyzed by multivariate regression analysis. P value 0.01 was defined as a significant difference ( error and power were 0.01 and 0.8, respectively). Areas under the ROC curve (AUCs) and cut-off values of each variable for cesarean delivery were calculated by ROC analysis. Statistical software (IBM SPSS statistics version 26) (IBM, NY) was used for all analysis.

3. Results
3.1 Comparison of maternal and obstetrical variables between the C/S (for dystocia) group and the vaginal delivery group

To determine which variables are related to risk of C/S for labor dystocia, we focused on women with cesarean delivery for dystocia and then compared them to those with vaginal delivery. 913 women were included for final analysis. Overall, 37 (4%) of 913 women underwent C/S for dystocia, while 876 women gave birth by vaginal delivery (summarized in Fig. 1). Among them, seven cases were diagnosed as CPD according to the clinical situation.

Next, we compared between the C/S for dystocia vs. vaginal delivery groups in various obstetrical variables to identify a possible warning sign of C/S for dystocia (Table 1). Low maternal height, older age, small obstetrical conjugate, large weight and head size of infant were associated with risk of C/S for dystocia with significant differences (Mann-Whitney U test; P 0.01). The differences in the transverse diameter, gestational week of delivery and fetal biparietal diameter (BPD) between the two groups were marginally significant, with P values from 0.01–0.05. The other variables did not differ between the two groups. Among the variables to show significant associations with C/S for dystocia, maternal height and the obstetrical conjugate were the only personal maternal characteristics that did not depend on the condition of the birth canal, uterine contractions or the newborn infant. Maternal height in the C/S group (154.0 5.8 cm) was clearly shorter than that in the vaginal group (158.0 5.4 cm), and the obstetrical conjugate in the C/S group (11.6 0.9 cm) was clearly smaller than that in the vaginal group (12.2 0.8 cm). One woman was shorter in stature than 150 cm (height = 142 cm), and she was diagnosed as contracted inlet (conjugate = 9.3 cm) and underwent elective C/S. Eight women were diagnosed with relatively contracted inlets by the obstetrical conjugate, and seven gave birth vaginally, whereas one gave birth by C/S. Among 37 women with C/S, only seven were diagnosed as CPD by abnormal labor conditions, including fetal head unengagement. Of seven with CPD, three were diagnosed as contracted inlet and one as relatively contracted inlet by the transverse diameter. The remaining 29 women underwent C/S for dystocia under conditions that did not include either contracted inlet or CPD.

Table 1.Comparison between C/S for dystocia vs. vaginal delivery groups.
3.2 Multivariate analysis of obstetrical variables to identify women with risk of C/S for dystocia

Older pregnant women are likely to undergo C/S due to not only their cervical resistance, uterine dysfunction or both but also maternal exhaustion. Indeed, maternal age in the C/S group (37.0 5.5) was four years older than that in the vaginal delivery group (33.0 5.4) in this study. Infant head size and birth weight in the C/S group were also greater than those in the vaginal delivery group, although these variables might be influenced by gestational week of delivery. Thus, there were several confounding variables in the univariate analysis shown in Table 1. We then tried to identify independent variables to be associated with C/S for dystocia by logistic regression analysis (Table 2). Eight variables that showed significant differences (P 0.05) between the C/S and vaginal delivery groups by univariate analysis were evaluated. The multivariate analysis revealed that the obstetrical conjugate was just an independent variable for C/S. The obstetrical conjugate was related inversely to the incidence of C/S for dystocia, with an odds ratio of 3.13 (95% CI: 1.32–7.14, P = 0.01), while the transverse diameter did not show a significant inverse correlation. Maternal age and height, infant weight and head size were not independent variables associated with the risk of C/S for dystocia. Univariate and multivariate analyses revealed that maternal height and the obstetrical conjugate are important variables associated with the risk of C/S for dystocia.

Table 2.Multivariate analysis of risk factors for C/S.
3.3 Correlation of the obstetrical conjugate to maternal height

3.4 ROC curve analysis to evaluate maternal variables for discrimination of mode of delivery In this study, we investigated the association between measures (the obstetrical conjugate and transverse diameter of pelvic inlet) of X-ray pelvimetry and cesarean delivery for labor dystocia using data from 913 women in labor. Our data indicated that the obstetrical conjugate was an independent variable correlating inversely with the incidence of C/S for dystocia but that maternal height could be a comparable variable to the conjugate in terms of the discrimination of the risk of C/S.

X-ray pelvimetry is a useful measure to evaluate the inlet to exclude CPD or contracted inlet and is recommended prior to labor induction/augmentation to negate the contracted inlet according to a guideline of maternal-fetal medicine in Japan [1]. Thus, we have routinely performed pelvimetry on all women who are to undergo induction or augmentation for various reasons. However, among 913 women, contracted inlet was only observed in four women (4/913 = 0.4%). Conversely, a Cochran systematic review demonstrated that women who receive X-ray pelvimetry are likely to undergo C/S. Dystocia is not only one of the major reasons for C/S but is also associated with pelvic disproportion, which is evaluated by pelvimetry. Then, we took an interest in the clinical question of whether measurements obtained from X-ray pelvimetry are associated with the incidence of C/S and influence our decision of mode of delivery in the cases of dystocia. Our database of more than one thousand measures obtained from routine X-ray pelvimetry was valuable to clarify this question. The Cochran review performed in 2017 identified five studies with a total of 1159 women, and these studies compared X-ray pelvimetry (n = 582) versus no pelvimetry (n = 577) [2]. The number of women who received X-ray pelvimetry in our study was greater than that in the Cochran review.

This study has some limitations. Since this was a retrospective study, the variability of the obstetricians in charge of decision making in the choice of delivery mode could not be ruled out. We also cannot deny the possibility that the diagnosis of dystocia also varied among the obstetricians in charge. On the other hand, the strength of this study was that the X-ray pelvimetry data were available for all of the more than 900 women in labor and the data were measured by the same obstetrician using the same rules.

X-ray pelvimetry is an important measurement to evaluate the pelvic inlet, especially prior to labor induction/augmentation. However, contracted inlet is a very rare event (approximately 1%) in Asian women, and maternal height can be comparable to measures of X-ray pelvimetry. Our data indicated that routine X-ray pelvimetry is not of value to decide on mode of delivery for women with dystocia.

KaK, YT and MI conducted this study and measured X-ray pelvimetry. YI and AK made figures and tables. OK, NakajT, NakaoT, CT, MAS, FC investigated data of patients and analyzed them by statistical methods. KeiK and AK organized this study and described the article. All authors have read and approved the manuscript.

All subjects gave their informed consent for inclusion before they participated in the study. The study was conducted in accordance with the Declaration of Helsinki, and the protocol was approved by the Ethics Committee of Tokyo Metropolitan Ohtsuka Hospital (2018-77). The decision of enrolled pregnant women to be included in this study was expressed by opt-out approach, which is posted on the board in the hospital and our hospital’s web site.

We are very thankful to Mrs. Naoko Tomita for her excellent management of clinical data and edit of the manuscript.

This research was supported by Japan Agency for Medical Research and Development under Grant Number JP 20gk0110042h0002.

Subject of this study. Among 1118 women who received X-ray pelvimetry, 205 women with C/S due to reasons other than dystocia were excluded. The remaining 913 were divided into two groups: cesarean (n = 37) and vaginal (n = 876) delivery groups.