Thyroid cancer (TC) is the most common malignant disease of endocrine system, and its incidence has been on the rise in recent years. In 2019, there were 233,846 new cases of thyroid cancer and 45,575 deaths from the disease worldwide [1]. China has the highest number of thyroid cancer cases and deaths in the world. Papillary thyroid cancer (PTC) accounts for approximately 90% of all thyroid cancers, and the increased incidence and mortality of PTC leads to an actual increase in all TC cases [2, 3]. The incidence of PTC increases with age, with more women than men [4]. Surgery is usually the first line of treatment for PTC. However, the prevalence of PTC remains a concern, as the recurrence rate of PTC is close to 30% and the cause-specific mortality rate over a 30-year period is 8.6% [5]. Therefore, it is an urgent and necessary task to find diagnostic markers and new therapeutic targets for PTC recurrence and metastasis.

The pathogenesis and progression of PTC has been reported to be associated with genetic and epigenetic alterations, including driver point mutations in BRAF and RAS, the diverse gene fusion (RET/PTC, ETV6-NTRK3) and miR146b, miR21, etc. [6, 7]. The cancer genome atlas project identified 299 genes and 24 pathways that drive tumor progression, including 12 genes involved in histones, histone methylation and demethylation [8]. Our previous studies found that thyroid cancer could induce Histone-lysine N-methytransferase 2D (KMT2D) to inhibit apoptosis by regulating H3K4 site and NCOA1/6 in the protein function and protein network analysis (Supplementary Fig. 1). In TC patients, KMT2D mutation status is associated with shorter disease-specific survival. Thanyawat et al. [9] also found that epigenetic modifications of KMT2D are involved in the malignant progression of TC. is a histone methyltransferase that stimulates tumor growth and triggers metastasis. KMT2D is located on chromosome 12q13.12 and is widely expressed in adult tissues. It is reported that KMT2D plays a role in binding enhancer regions and maintaining global H3K4me1/2 levels. H3K4me2 and H3K9me2 are strongly associated with gene transcription. H3K4me2 is found in a wider range of promoters, enhancers and long-range regulatory elements. H3K9me2 presents chromatin extensively and is enriched in a number of tightly-controlled signaling and cell-type specific pathways. In addition, KMT2D is one of the most commonly mutated genes in many different types of cancer. In breast cancer, the PI3K pathway regulates ER-dependent transcription through the epigenetic regulator KMT2D [10]. Ming et al. [11] indicated that KMT2D regulates H3K4 methylation and participates in the pathology of ovarian cancer. These studies suggest that KMT2D may play an important role in PTC.

Consequently, we focused on the histone methyltransferase KMT2D to explore the specific mechanism of PTC carcinogenesis and invasion. In this study, we analyzed KMT2D expression levels in different thyroid cancer cell lines and evaluated KMT2D-mediated epigenetic modification on the progression of PTC. And, we proposed that inhibitors targeting the KMT2D gene may be used for the treatment of PTC.

High-sensitivity ChIP Kit (ab185913, abcam, Cambridge, UK) was used in this study. We assessed the association between KMT2D and NCOA6. The protocol was as follow: (1) Formaldehyde cross-linking and ultrasonic crushing of cells: the cells were removed, formaldehyde was added to make the final concentration of formaldehyde 1%, and the cells were incubated at 37 °C for 10 min. The cross-linking was terminated, the medium was sucked up, and the cells were washed twice with cold Polybutylene Succinate (PBS). The cells were collected in a 15 mL centrifuge tube with a cell scraper. After pre-cooling, the cells were collected by centrifugation, and the supernatant was poured out. (2) Impurity removal and antibody feeding: after ultrasonic crushing, centrifuge to remove insoluble substances; A 900μL dilution Buffer and 20 μL of 50polyisocyanopeptide (PIC) are added to 100 μL of the ultrasonic fragmentation product. Then 60 μL of Protein A arose/Salmon Sperm DNA was added. Toss and mix at 4 °C for 1 h; After 1 h, the samples were left at 4 °C for 10 min to precipitate and centrifuged at 700 rpm for 1 min. Take the supernatant. 20 μL of each will be reserved as input. Antibody was added to one tube and no antibody was added to the other overnight at 4 °C. (3) Test the effect of ultrasonic crushing: Take 100 μL of the product after ultrasonic crushing, add 4 μL 5M NaCl, and treat it at 65 °C for 2 h to uncross-link. Half was extracted with phenol/chloroform. Ultrasonic effect was detected by electrophoresis. (4) Precipitation and cleaning of immune complexes: After overnight incubation, 60 μL Protein A Agarose/Salmon Sperm DNA was added to each tube at 4 °C for 2 h; After 10min, the supernatant was removed by centrifugation. Wash the precipitated complex. Then, 20 μL NaCl was added to elution. (5) Recovery of DNA samples: After unlinking overnight, l μL RNaseA was added and incubated at 37 °C for 1 h. 10 μL EDTA, 20 μL Tris HCl (pH 6.5), 2 μL 10 mg/mL proteinase K was added for 2 h, subsequently. The final sample was dissolved in 100 μL HO. (6) The bound target DNA fraction was amplified by PCR.

Cells were seeded in a 96-well plate for 24 h, and 10 L CCK-8was added. The availability of cells was detected by CCK-8 kit (MedChemExpress, New Jersey, USA) at 0 h, 24 h, 48 h and 72 h after siRNA transfection. The results were determined by microplate reader (Molecular Devices, Silicon Valley, USA) at 450 nm.

Cells were resuspended in serum-free medium, added to a six-well plate (5 10 cells/well) overnight. The wounds were made using a 10 L pipette tip, cell debris was removed by washing with PBS for three times. Wound healing was observed under an inverted microscope at 0 h and 12 h. Cells migration was assessed by ImageJ v1.8.0 software (National Institutes of Health, New York, USA).

Cells were added into the upper chambers of 24-well transwell chambers (Corning, New York, USA) with or without BD Matrigel (invasion assay and migration assay). After 24 h of incubation, cells on the surface of upper chamber were removed with cotton swabs. The invaded/migrated cells on the lower surface were fixed with 4% paraformaldehyde and stained with 0.1% crystal violet. Cells were imaged and counted in five random fields. 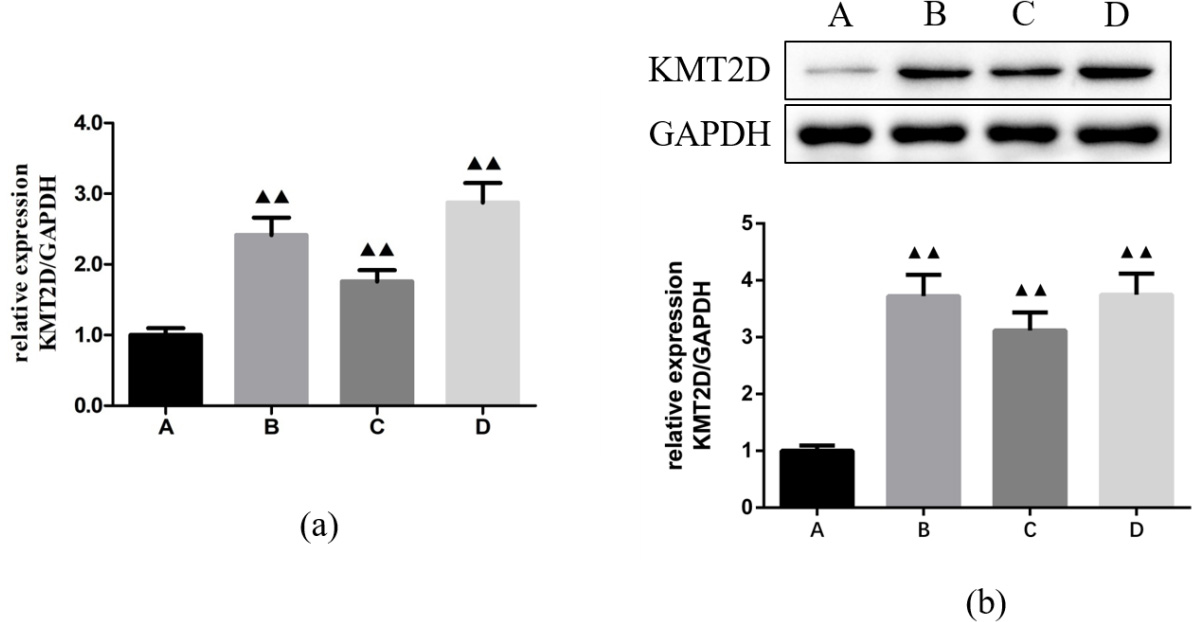 TPC, IHH-4 and BCPAP cells were transfected with KMT2D inhibitors or NC to evaluate the effect of KMT2D in thyroid papillary carcinoma cells. CCK-8 assay demonstrated the cell viability in si-KMT2D (1) and si-KMT2D (2) groups was lower than in si-NC group (Fig. 2a). It indicated that KMT2D knockdown suppressed the proliferation of TPC, IHH-4 and BCPAP cells. Then, Wound healing and Transwell assay were used to investigate the role of KMT2D in the cell invasion and migration. As shown in Fig. 2b, the migration distances in si-KMT2D (1) and si-KMT2D (2) groups were less than si-NC group at 12 h after scratch. Similarly, the Transwell assay showed a significantly decrease in the number of migrated cells in si-KMT2D group (p 0.01). The number of invaded cells in KMT2D gene silence group decreased remarkably compared with si-NC group (p 0.01, Fig. 2c). These results indicated that KMT2D promotes the proliferation, migration and invasion of thyroid papillary carcinoma cells.

3.3 The Mechanism of KMT2D on Papillary Thyroid Cancer

ChIP assay showed that KMT2D is associated with NCOA6 in TPC, IHH-4 and BCPAP cells (Fig. 3a). Compared with anti-IgG group, the input of NCOA6 is significantly increased in anti-KMT2D group. To understand why KMT2D is required for the activities of NCOA6, we examined the levels of H3K4me2 and H3K9me2, which are closely correlated with active enhancers and promoters. Western blotting showed that silencing KMT2D (si-KMT2D) was significantly upregulated H3K4me2 and H3K9me2 at protein levels (Fig. 3c). In addition, western blotting and qRT-PCR analysis were used to explore the association of KMT2D and NCOA6. As shown in Fig. 3b,c, KMT2D knock out markedly decreased the expression of NCOA6 and THRB compared with si-NC group. These results demonstrated that KMT2D regulates the expression of NCOA6 and THRB through demethylation of H3K4me2 and H3K9me2 in thyroid papillary carcinoma cells. KMT2D plays an important role in tumorigenesis, differentiation, metabolism and inhibition. KMT2D mutations are common in various types of cancer, including the brain, lymph nodes, blood, lung, thyroid, intestine, and endometrium [12, 13, 14]. The anti- or pro-tumor effects of KMT2D are related to cell types. In bladder cancer tissues and cell lines, KMT2D is downregulated and its overexpression could significantly alleviate tumor progression [15]. KMT2D also exhibits tumor suppressor effects in melanoma and pancreatic cancer cells [16, 17]. It may depend on the inhibition of downregulated oncogenes, including PTEN, P53 and STAG2 [18]. On the other hand, KMT2D is required for the formation of acute myeloid leukemia and is highly expressed in esophageal squamous cell carcinoma, prostate cancer, pancreatic and gastric cancer [15]. In this study, we found that KMT2D was overexpressed in PTC cell lines by qRT-PCR and Western blotting. It suggests that KMT2D may play an important role in the initiation and development of PTC. KMT2D deficiency has been associated with cell proliferation and apoptosis in gastric, pancreatic, prostate and colon cancer [19]. Consistent with previous findings, KMT2D knockdown inhibited the proliferation, migration and invasion of TPC, IHH-4 and BCPAP cells. It indicated the tumor inhibition of KMT2D on PTC.

Then, we studied the underlying mechanism of KMT2D mutations on PTC. KMT2D mutations lead to defective enhancer regulation and genomic instability during DNA replication and/or transcription [20]. KMT2D is associated with WRAD, NCOA6, PTIP, PA1 and H3K27 demethylase UTX in protein complexes. Cefan et al. [21] reported that Pygo2 is involved in the progression of glioma by upregulating the KMT2D complex and H3K4me3. Whole exome sequencing showed that there were 6 harmful mutations (ARID1A, NCOR2, KMT2D, NCOA6, MECP2 and SUPT6H) in the epigenetic regulation of colorectal cancer in Chinese patients. Moreover, KMT2D and NCOA6 encode subunits of histone H3K4 methyltransferase protein complexes that act as coactivators of p53 [20]. In this study, ChIP assay confirmed the binding of KMT2D and NCOA6 in PTC cells. Meanwhile, the mRNA and protein levels of NCOA6 and THRB were significantly decreased in si-KMT2D thyroid cells, suggesting that KMT2D modulates the expression of NCOA6/THRB signal axis. In addition, western blotting showed that si-KMT2D could upregulate the expression of H3K4me2 and H3K9me2 in TPC, IHH-4 and BCPAP cells. The role of KMT2D in epigenetic regulation was demonstrated.

In summary, we found that KMT2D is markedly upregulated in PTC cells and plays a vital role in the migration and invasion of PTC cells. KMT2D knockdown could regulate the expression of NCOA6, THRB, H3K4me2 and H3K9me2. The results indicated that KMT2D regulated the NCOA6/THRB signaling axis through epigenetic modification, promoting the migration and invasion of PTC.

In conclusion, we have identified that NCOA6/THRB signal axis as a target of KMT2D in PTC cells, which may be regulated by epigenetic modification. It provides new insights into the role of KMT2D in the treatment of PTC.

All data generated or analyzed during this study are included in this published article.

We sincerely thank all who participated in this study.

This study was supported by Hangzhou Science and technology Development plan project (20201231Y031).