Nasopharyngeal carcinoma (NPC) is a type of head and neck cancer with a distinct racial and geographic distribution across the world (1). Most cases of NPC are often found in Southern China and Southeast Asia (2). A great number of studies suggest the vital role of multiple factors, including genetic susceptibility, Epstein-Barr virus (EBV) infection, environmental and dietary factors, in the carcinogenesis of NPC (3). NPC have high tendency of invasion and lymph node metastasis, contributing to the poor prognosis of NPC patients (1). Although the combination of chemotherapy and radiotherapy can improve the 5-year survival rate of NPC patients, the overall prognosis still remains poor with increased rate of relapse or metastasis (4). Therefore, the underlying molecular mechanism of NPC carcinogenesis needs immediate revelation, which may expose novel molecular targets towards its treatment.

Resveratrol (trans-3, 4’, 5-trihydroxystilbene) is a natural polyphenolic phytoalexin which has been found in the skin of many fruits, including grapes, berries and peanuts (5). Accumulating evidence indicate that resveratrol is able to regulate various molecular targets and signaling pathways involved in cell proliferation, inflammation and cell cycle (6, 7). Moreover, several studies also appreciate the anti-tumor effects of resveratrol, for it can trigger apoptosis in a great number of cancer cell lines. For example, Kumar et al. showed that resveratrol can induce superoxide species-independent apoptosis in murine prostate cells and might act as a therapeutic agent against prostate cancer (8). Chen et al. also reported that resveratrol exhibited multiple tumor-suppressing activities in bone cancer by affecting a series of critical events, like inducing apoptosis, in cancer cells (9). Therefore, we hypothesize that resveratrol may act as an effective therapeutic agent in the treatment of NPC.

An imbalance between cell proliferation and apoptosis may result in tumor formation, and apoptosis plays a crucial role in the regulation of tissue homeostasis (10). Survivin is a protein that can effectively inhibit apoptosis and regulate cell cycle (11). A recent study by J.H.Cai et al. elucidated an inverse correlation between the mean survival time of NPC patients and Survivin protein or mRNA expression (12). Thus, Survivin may play an important role in onset and development of NPC.

In our current study, we report the inhibitory effect of resveratrol on Survivin expression in NPC cells, promoting apoptosis and suppressing proliferation of the treated cells. Our findings suggested that resveratrol may serve as an effective therapeutic agent against NPC.

Resveratrol was obtained from Sigma (St. Louis, MO, USA), and a stock solution of 100 mmol/L was prepared by dissolving it in 100% DMSO and stored at -20˚C. NPC cells received different concentrations (25, 50,100 μM) of Resveratrol during experimentation.

Cell Counting Kit-8 (CCK-8) assay was performed to assess cell proliferation. Cells were seeded at a density of 5 ×103 cells per well in 96-well plates and incubated with different concentrations of resveratrol treatment, from Day 0 to Day 5. At indicated time points, 10 μL of CCK-8 solution (Beyotime) was added to the cultures and incubated at 37°C for 2 h. The absorbance was measured at 450 nm using a microplate spectrophotometer (Molecular Devices, Sunnyvale, USA). Triplicate wells were used in each group.

Both naive and Resveratrol treated NPC cells were lysed with RIPA lysis buffer (Beyotime Institute of Biotechnology, Shanghai, China), according to the manufacturer’s protocol. Protein concentrations were determined by BCA method. Same amount of proteins was separated by 10% SDS-PAGE gel and then transferred into PVDF membranes (Millipore). After blocking with 5% BSA, the membrane was treated with primary antibodies (Santa Cruz Biotechnology: anti-Ki67, anti-PCNA, anti-cleaved-caspase-3, anti-cleaved-caspase-9, anti-Survivin and anti-GAPDH) and incubated overnight at 4˚C. Following day, post wash, membrane was incubated with HRP-conjugated secondary antibodies for 1 h at room temperature, and signals were detected by ECL.

Cell apoptosis analysis was performed using an Annexin V-FITC/propidium iodide (PI) apoptosis detection kit (Multisciences, Shanghai, China). In brief, 5x105 cells, washed with PBS and resuspended in binding buffer, were incubated with 5 μL of Annexin V-FIFC and 10 μL of PI for 15 min in the dark. Post incubation, 400 μL of binding buffer was added and cell apoptosis was analyzed in a flow cytometer (BD Biosciences).

All data are represented as the mean ± standard deviation (SD). Statistical analysis was performed by Student’s t-test or one-way ANOVA using SPSS 19.0. software. Values of P < 0.0.5 were considered statistically significant. 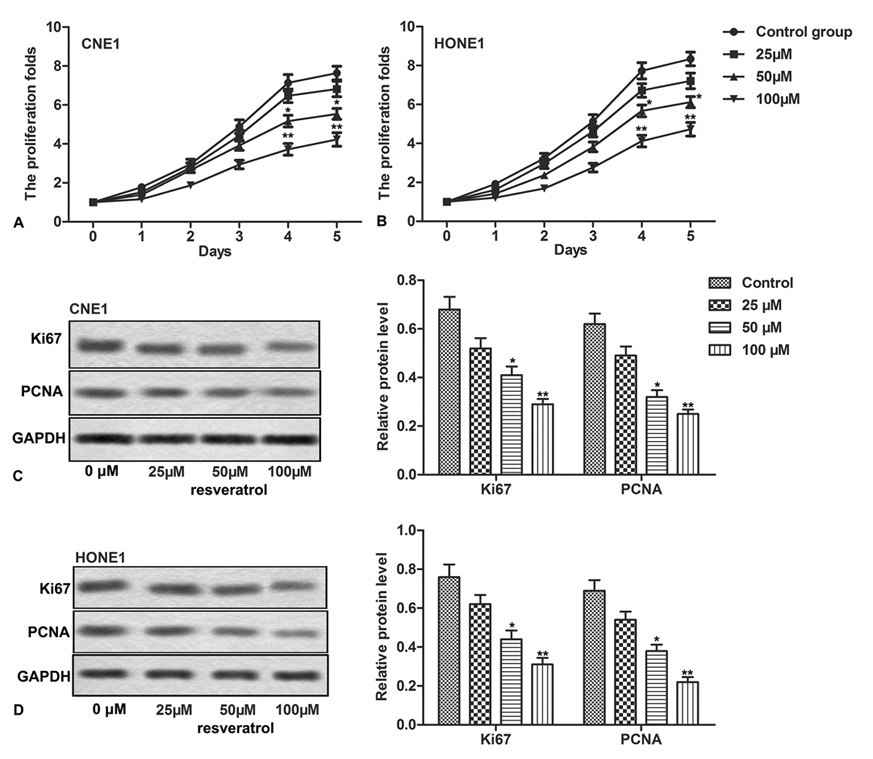 4.3. Resveratrol suppresses the expression of Survivin 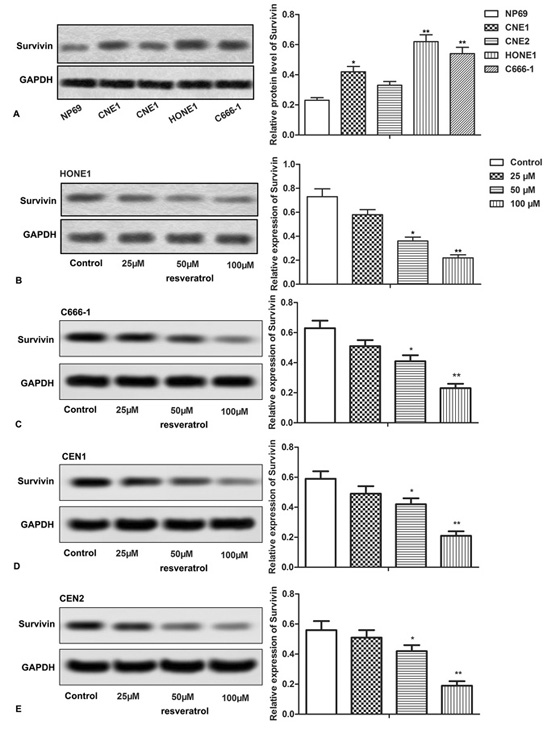 4.4. Overexpressed Survivin counteracts the effects of resveratrol in NPC cells

To further investigate the interaction between resveratrol and Survivin, CNE-1 and HONE1 cells were transfected with pcDNA3.1.-GFP-Survivin that significantly increased the expression of Survivin (Figure 4A-4D, **P < 0.0.1). Both the survivin overexpressing and naive CNE-1 and HONE1 cells were treated with 100 μM resveratrol, and assessed for cell proliferation and apoptosis. We found that overexpressed Survivin remarkably promoted cell proliferation and inhibited cell apoptosis rate despite the presence of resveratrol (100 μM) (Figure 4E-4H, *P < 0.0.5, **P < 0.0.1, #P < 0.0.5). In addition, resveratrol (100 μM) was unable to counteract the overexpressed-Survivin induced significant increase in the expression of Ki67 and PCNA and decrease in the expression of cleaved caspase-3 and cleaved caspase-9 (Figure 4I-4L, *P < 0.0.5, **P < 0.0.1, #P < 0.0.5). Above results indicated that overexpressed Survivin counteracted the effects of resveratrol on cell proliferation and apoptosis of NPC cells. 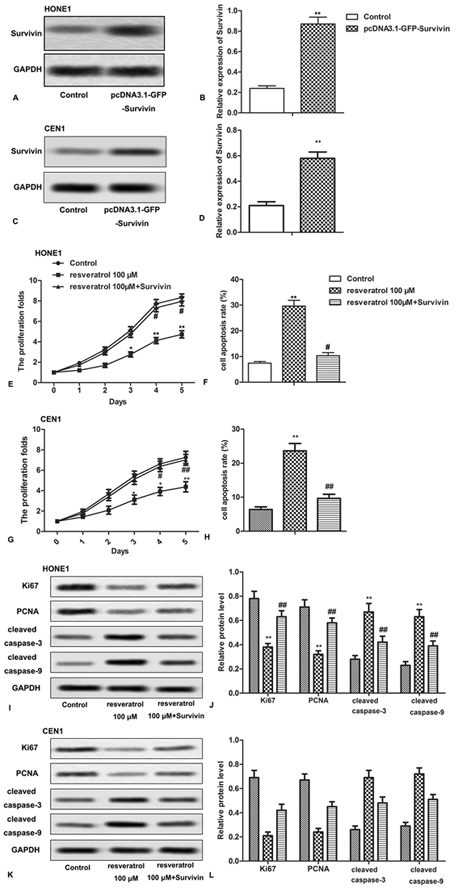 During the past decades, natural antioxidants extracted from plants or fruits have received extensive attention for their anti-tumor effects. Numerous phytochemicals derived from edible plants have been reported to interfere at a specific stage of the carcinogenic process (13). As one of the natural polyphenolic phytoalexins, resveratrol has been found to induce multiple beneficial effects on health, including anti-aging, anti-oxidant and anti-tumor functions (6, 7). In recent years, the anti-tumor effects of resveratrol have been identified in numerous in vitro and in vivo studies with various types of cancers (14-16). In our present study, we demonstrated that resveratrol suppressed cell proliferation while induced cell apoptosis through inhibiting the expression of Survivin in NPC cells, suggesting that resveratrol may serve as an effective agent against NPC.

Apoptosis is a normal physiologic process which is important in the maintenance of cellular homeostasis by eliminating malicious cells (22). Numerous studies have shown that resveratrol can induce apoptosis in various types of cancer cells and several mechanisms of resveratrol-mediated apoptosis have also been elucidated. Resveratrol was reported to cause apoptosis of DU 145 prostate cancer cells through activation of MAPK, increase in cellular p53 content, serine-15 phosphorylation of p53 and increased p53 binding to DNA (23). Lin’s study elucidated that resveratrol caused apoptosis in human head and neck squamous cell carcinoma cells (UMSCC-22B cells) by inducing nuclear accumulation of COX-2 (24). Similarly, in our study, we also found that resveratrol increased cell apoptosis rates in NPC cells in a dose-dependent manner. The mechanisms of apoptosis include two main pathways: the extrinsic pathway and the intrinsic pathway which involve two major caspase cascades leading to apoptosis (25, 26). Caspase-9 is an initiator caspase which can activate caspase-3 in the apoptotic signaling cascade, and cleaved caspase-9 is an active form of caspase-9. Caspase-3 is cleaved to form the active caspase-3 enzyme which degrades multiple cellular proteins and is responsible for morphological changes and DNA fragmentation in cells during apoptosis (27, 28). The data from our study showed that resveratrol up-regulated the expression of cleaved caspase-3 and cleaved caspase-9 in NPC cells, suggesting a resveratrol mediated induction of apoptosis in NPC cells. Taken together, we found that resveratrol could act as an effective therapeutic agent against NPC, for it could suppress cell proliferation and promote apoptosis of NPC cells.

In conclusion, resveratrol exerted dose-dependent effects on the inhibition of cell proliferation and induction of apoptosis in NPC cells via inhibiting the expression of Survivin. Findings from our study is hoped to help in the identification of novel molecular targets of resveratrol for the treatment of NPC.