Cerebral ischemia is triggered by insufficient blood supply to the brain, resulting in irreversible brain damage with high morbidity and mortality (1). Reperfusion induced oxidative damage would aggravate cerebral injury by activating free radical reactions in the brain tissue. The most vulnerable region to cerebral ischemia-reperfusion (I/R) injury is the hippocampal CA1 area, which is responsible for learning and memory (2). Further, cerebral I/R could dysfunctionalize cerebral microcirculation, resulting in increased permeability of cerebral blood-brain barrier (BBB) and elevated extravasation of serum proteins in the perivascular space. Thus, early and appropriate treatment is crucial to lowering brain damage.

Limited ability of nerves to regenerate is the key reason for invalid restoration after focal cerebral ischemia. Therefore, improving the morphological and functional recovery of nerves can be the prime target in the treatment of cerebral I/R injury. Previous studies have suggested that some traditional Chinese medicines possess neuroprotective effects, demonstrated by inhibiting the death of nerve cells and loss of axons in various nerve diseases. For example, the polysaccharides of Lycium barbarum have been demonstrated to play an important role in neuroprotection (6). Besides that, MPTP/MPP+ induced dopaminergic neurodegeneration and motor disturbance could be alleviated by harpagoside by up-regulating glial cell line-derived neurotophic factor (7). Furthermore, Hiroshi and colleagues observed that both spontaneous and nerve-evoked acetylcholine could be up-regulated by higenamine (8). Thus, higenamine may be a potential drug in treating cerebral I/R injury.

The main pathological feature of cerebral I/R injury is neuroinflammation characterized by various complex cellular activities and processes such as production of inflammatory factors that includes tumor necrosis factor (TNF)-α, interleukin (IL)-1β, IL-6 and IL-18 and tumor necrosis factor (TNF)-α (9). Furthermore, higenamine can also reduce inflammatory reaction by inactivating NF-κB, and thus can be beneficial in conditions like endotoxemia (10). In addition, in a murine intestinal I/R injury model, higenamine could bring down the intestinal injury score by increasing the expression of HO-1, while also reducing the levels of inflammatory cytokines, in vivo (11). These studies indicate the potential of higenamine in the treatment of cerebral I/R injury.

150 SPF male rats (weighting 250±20 g) were obtained from the Center of Laboratory Animals, Zhejiang University and housed at 22±2°C under a 12-hour light/dark cycle for 1 week. The experimental procedures were performed strictly following the National Institute of Health Guidelines for the Care and Use of Laboratory Animals.

The cerebral I/R injury model was established through middle cerebral artery occlusion (MCAO) as originally described (12). In brief, post-anesthesia, the left middle cerebral artery (MCA) of sprague dawley (SD) rats were occluded by filament at the level of alar foramina. Reperfusion was accomplished 2 hour later, by withdrawing the filament. During the procedure, the internal temperature of rats was maintained at 37°C using a heating pad. Post procedure, surgical wounds were closed using sterile techniques. 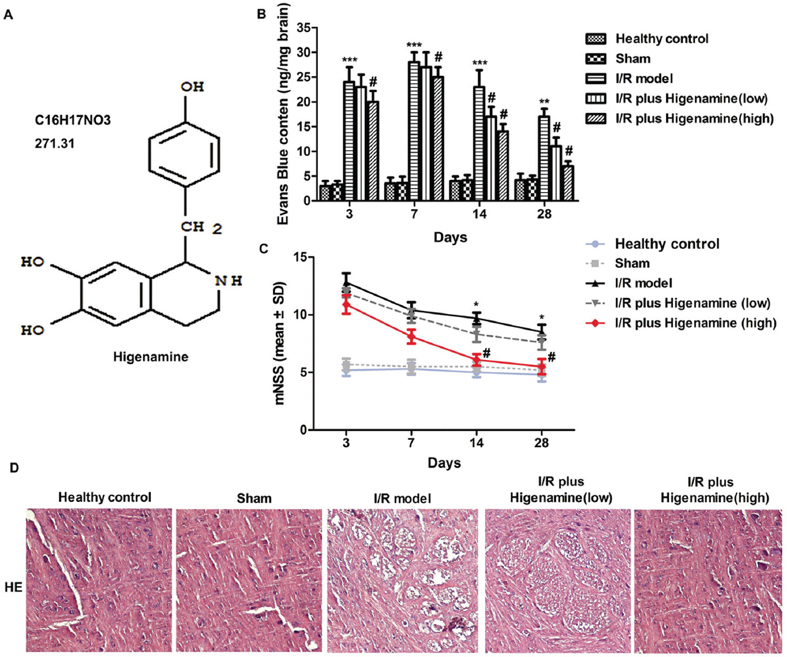 3.6. Hematoxylin and Eosin (HE) staining

Using HE staining, the morphological structure of CA1 hippocampal region was assessed in all experimental groups of SD rats, at 2 weeks post-MCAO, as reported previously (15). Images were captured under the Olympus CX23 light-microscope (Olympus, Tokyo, Japan).

After the rats in each group were euthanized, at 2 weeks post-MCAO, brain tissues were carefully recovered to assess the status of axons within. The samples were subject to immunohistochemical staining for neurofilament 200 (NF-200), as described before (16). Images were captured under optical microscope (Olympus, Tokyo, Japan).

At 14 days after MCAO, the presence of CD14+ cells in peripheral blood was assessed by flow cytometry. The method was performed strictly according to manufacturer’s instructions using FACS (BD Bioscience, Shanghai, China).

Statistical analysis was performed using SPSS 17.0 (Statistical Package for the Social Sciences, IL, USA). All results were presented as mean ± SD. The statistical significance of the studies was analyzed using one-way ANOVA. The difference was considered statistically significant at P < 0.05.

The EB extravasation assay demonstrated that both high and low concentration of higenamine could suppress the increased BBB permeability at 14 and 28 days post-MCAO (Figure 1B). mNSS score analysis showed that the score was closest to 5 points at 14 days and 28 days in I/R + higenamine groups, compared with other groups (Figure 1C). Thus, 14th day was chosen as the optimal time point for the subsequent experiments. HE staining suggested that the neuronal degeneration was reduced in IR + higenamine groups, compared to I/R model group, especially when dosed at higher concentration (50 mg/kg) of higenamine (Figure 1D). These results indicate that higenamine could attenuate brain ischemic injury caused by I/R.

The impact of higenamine on axonal regeneration was assessed by detecting the expression level of related proteins. Immunofluorescence staining revealed a significant decrease in the level of FN-200 in I/R model group, compared to control and sham group (Figure 2A-B). However, treating with higenamine, especially at the concentration of 50 mg/kg, significantly increased the FN-200 expression in I/R rats, compared to untreated group (Figure 2C). Western blot analysis revealed a similar result in GAP-43 expression, the expression of which was increased in higenamine treated I/R rats. Further, increased levels of RGMa in I/R rats was also inhibited by higenamine (Figure 2C). These results suggest that higenamine may induce axonal regeneration. 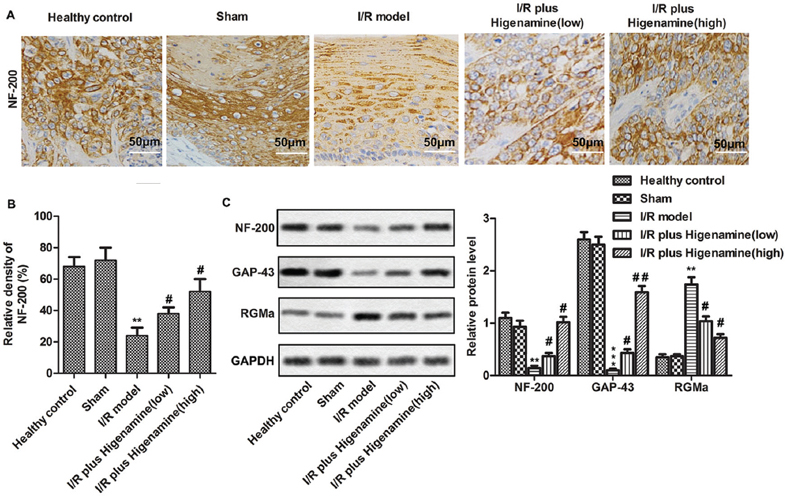 ELISA was employed to determine the anti-inflammatory effect of higenamine in I/R rats. As shown in Figure 3, the I/R induced enhanced expression of TNF-α, IL-1β, IL-6 and IL-18 were remarkably repressed by higenamine, especially at the concentration of 50 mg/kg. The results demonstrated that I/R iinduced inflammatory response could be effectively suppressed by higenamine. 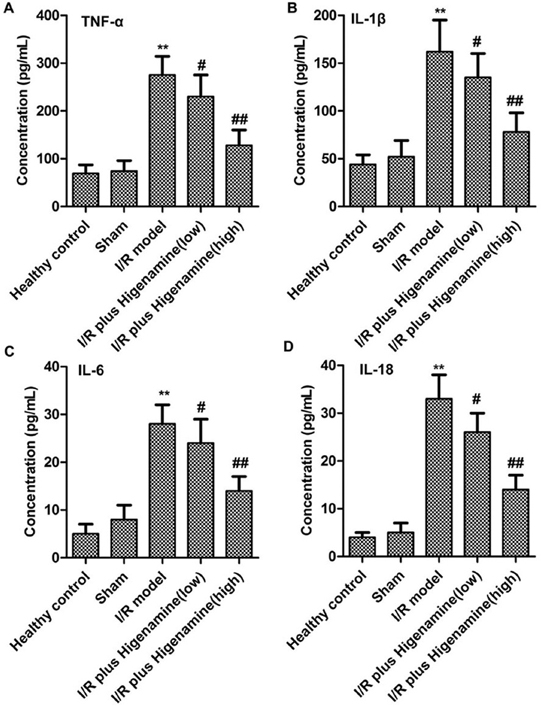 Various inflammatory signaling pathways were activated in the process of I/R injury. The effect of higenamine on these pathways was assessed by measuring the associated proteins in peripheral blood using flow cytometry and western-blot. The results revealed that the I/R induced increase in the number of CD14+ cells was remarkably suppressed by higenamine (Figure 4A). Further, the increased levels of CD14, TLR4, TAK1, NF-κB, MIP-2, COX-2 in I/R model group, compared to control and sham group, were significantly reduced in I/R + higenamine (high) group (Figure 4B). These findings illustrate that the higenamine can inactivate inflammatory signaling pathways to control inflammatory response. 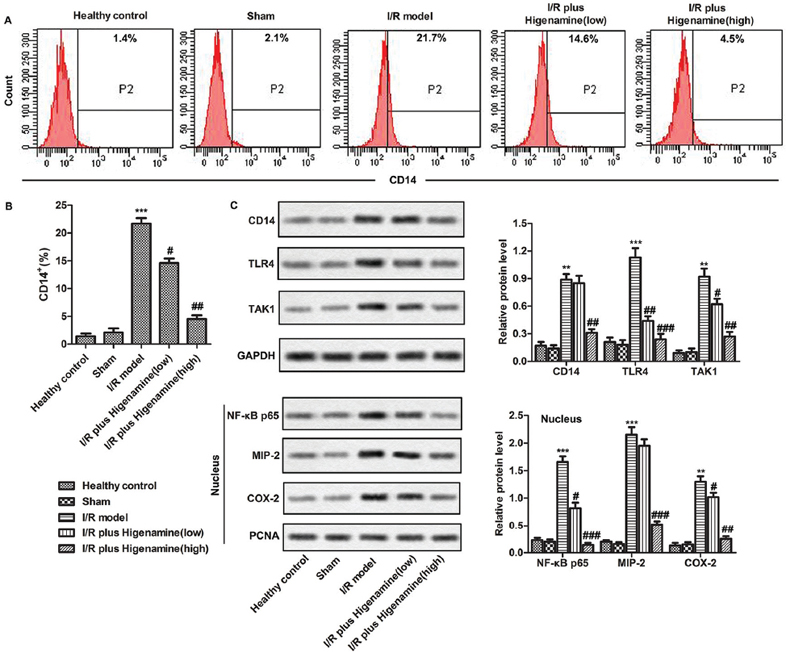 Temporary or permanent decrease in cerebral blood flow would result in cerebral ischemia, which is connected with neuronal injury, apoptosis, inflammation, excitotoxicity, depolarization and peri-infarct (17). Although rapid reperfusion is essential for treating cerebral ischemia, the occurrence of injury after perfusion is often an important reason for the aggravation of brain damage (18). Despite various efforts in understanding the underlying mechanism and drug discovery have been taken, the effective treatment of cerebral I/R has so far been extremely limited. Increasing number of Chinese herbs, such as ampelopsin (19), salvianolic acid B(20), astragaloside IV (21) and triptolide, have been used for treating cerebral I/R injury (22). These studies suggested the prospects and possibilities of Traditional Chinese medicine in treating cerebral I/R injury.

Higenamine is regarded as a traditional heart stimulant and anti-inflammatory in China. According to published reports, higenamine possesses a variety of pharmacological properties, including dilation of blood vessels and bronchi, immunomodulation, anti-inflammation, anti-apoptosis and anti-oxidation (23). Studies over the last few years on higenamine have revealed its crucial role in treating ischemia reperfusion injury. Wu et al. pointed out that myocardial ischemia reperfusion injury and myocyte apoptosis could be attenuated by higenamine via β2-AR/PI3K/AKT signaling pathway (24). Similarly, Lee and colleagues observed that apoptotic cell death could be decreased by higenamine via inducing heme oxygenase-1 in rat myocardial I/R injury (25). Furthermore, higenamine could regulate Nrf2-HO-1-Hmgb1 axis and reduce the damage of intestinal I/R in mice (11). A similar conclusion was drawn in our research, where higenamine exerted protective effects on cerebral I/R injury via decreasing neuronal degeneration in rats.

BBB is closely associated to the homeostasis of the brain microenvironment via limiting the transport of substances from the blood to the brain (28). BBB breakdown is one of the major mechanisms leading to the progression of brain damage and long-term neuronal defects. Accumulated studies have indicated that various Chinese herbs could blunt BBB damage. For example, tetramethylpyrazine could maintain integrity of BBB via alleviating apoptosis and permeability of brain microvascular endothelial cells (29). In addition, the integrity of the BBB could be protected by tanshinone IIA through suppressing the level of critical endothelial tight junction proteins (30). Similarly, in our study, higenamine tremendously reduced the BBB permeability caused by cerebral I/R injury. These results suggested that the higenamine could repress the BBB permeability and thus may ameliorate cerebral I/R injury.

Inflammation plays a vital role in the pathogenesis of cerebral I/R injury. Autoimmune responses and neuroinflammation could be induced by TLR4 signaling during the process of cerebral ischemia. The downstream of TLR4 signaling include activation of TLR4, CD14 and NFκB, and the release of inflammatory mediators such as COX-2 and TNF-α (31). The anti-inflammatory effect of higenamine was demonstrated by researchers in various diseases models. Si Chen et al. demonstrated that TNF-α could be directly bound by hypaconitine, mesaconitine, higenamine and quercetin, reducing TNF-α-mediated cytotoxicity in L929 cells (32). Moreover, Young and colleagues observed that iNOS expression was remarkably suppressed by higenamine through reducing the activation of NF-κB, which may be beneficial in various inflammatory diseases (33). Similarly, in our study, higenamine significantly repressed the elevated CD14+ cells in I/R model rats. In addition to this, the increased expression of inflammatory cytokines (TNF-α, IL-1β, IL-6 and IL-18) was inhibited by higenamine, while also inactivating the inflammatory pathways (TLR4, TAK1, NF-κB, MIP-2 and COX-2). These results strongly demonstrated the anti-inflammatory effects of higenamine.