Pneumonia, an inflammatory disease of the lung, can be caused by the infection of multifarious pathogens such as fungi, viruses and bacteria (1). Pneumonia is a major health problem in the elderly with massive socioeconomic costs and high morbidity (2, 3). Streptococcus pneumoniae is a Gram-positive bacterium and the most common pathogen of pneumonia, accounting for approximately 27% of all pneumonia cases globally (3). Current therapeutic strategies such as antimicrobial regimens, antibiotics, and adjunctive therapies are difficult to achieve the accurate diagnosis and appropriate therapy for pneumonia due to various factors such as antimicrobial resistance, immunosuppression and polypharmacy (4, 5). Considering the challenges and massive disease burdens in the management of pneumonia, it is imperative to seek for alternative approaches to alleviate pneumonia-induced tissue damages and deaths.

Baicalein (5,6,7-trihydroxyflavone) is a nature flavonoid isolated from the roots of Oroxylum Indicum and Scutellaria Baicalensis Georgi, and it has been proposed to treat cerebral ischemia, cancers, and inflammatory diseases (6-8). For example, Baicalein has been found to facilitate cell apoptosis by upregulating DEPP (decidual protein induced by progesterone) and Gadd45α (growth arrest and DNA damage-inducible 45α) as well as activating MAPK pathway in colon cancer (9). Baicalein was also found to ameliorate 2, 4, 6-trinitrobenzene sulfonic acid (TNBS)-induced colitis by reducing myeloperoxidase (MPO) activity and the expression of pro-inflammatory cytokines such as interleukin (IL)-1β and tumor necrosis factor (TNF)-α in mice (10).

Mouse lung tissue samples were immersed in optimal cutting temperature compound and snap-froze in liquid nitrogen. For histopathological examination, the samples were sliced into 4 micrometer sections and stained with hematoxylin and eosin (H&E) as previously described (13). The extent of lung damage was evaluated using a histological scoring scheme as previously described (13). Cell apoptosis in the lung tissue samples was assessed by TUNEL assay using an in situ Cell Death Detection Kit (Sigma-Aldrich). TUNEL positive cell percentage was counted in 10 random fields.

Baicalein protected mice from Streptococcus pneumoniae-induced deaths. (A) Brief outline of our experimental design. Mice were intranasally infected with about 1×107 CFU Streptococcus pneumoniae and intraperitoneally injected with PBS (vehicle) or Baicalein (Bai, 25, 50, 100 mg/kg) at 12 h intervals for a total of 48 h. (B) The mortality of mice was monitored every 12 h. *p < 0.05.

To investigate the potential protective effect of Baicalein on pneumonia death, mice were infected with Streptococcus pneumoniae and administered with PBS or Baicalein at the indicated time points (Figure 1A). Mortality of Baicalein- or vehicle-treated mice were then monitored at 12-, 24-, 36- or 48-hours post-infection. We did not observe any mouse death in the initial 24 h upon the infection of Streptococcus pneumoniae (Data not presented). At 36- or 48-h post-infection, mortality of vehicle-treated mice was over 20% and over 60%, respectively, which was significantly decreased by Baicalein treatment in a dose dependent manner (Figure 1B). These data suggested that Baicalein could protect mice from Streptococcus pneumoniae-induced deaths.

Inflammation is implicated in pneumonia-related tissue damage and death. To evaluate the influence of Baicalein treatment on the inflammatory responses in Streptococcus pneumoniae-infected mice, we analyzed the pro-inflammatory cytokine levels in mouse lung. Our ELISA results showed that treatment with Baicalein markedly reduced the levels of TNF-α, IL-6, IL-1β and IFN-γ in the mouse lung at 36 h and 48 h after Streptococcus pneumoniae infection (Figure 2A-2C). We also found that Baicalein treatment resulted in a significant reduction in CXCL1 and CXCL2 levels in mouse lung at 36 h and 48 h post-infection (Figure 2E and 2F). 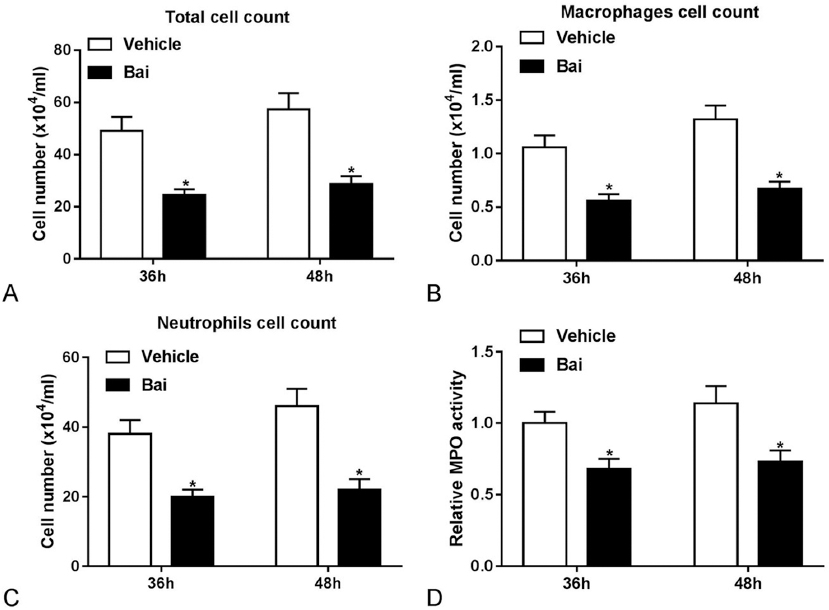 Baicalein protected mice from Streptococcus pneumoniae-induced deaths. (A) Brief outline of our experimental design. Mice were intranasally infected with about 1×107 CFU Streptococcus pneumoniae and intraperitoneally injected with PBS (vehicle) or Baicalein (Bai, 25, 50, 100 mg/kg) at 12 h intervals for a total of 48 h. (B) The mortality of mice was monitored every 12 h. *p < 0.05.