Cervical cancer ranks third among women’s cancers in the whole world. About 528,000 people suffers from cervical cancer annually, and 266,000 people died of the disease [1, 2]. It is a primary epithelial malignant tumor of cervix, which referred to cancer occurring in the cervix and arise from cervical intraepithelial lesions [3]. Long-term persistent HPV infection significantly increases the incidence of cervical cancer [4, 5, 6]. Without treatment, about a third of Cervical intraepithelial neoplasia (CIN) 3 will become invasive cervical cancer within 30 years [7, 8, 9]. Cervical cancer was a disease that can be prevented and cured for the following reasons: (1) Understanding the main causes of human papillomavirus (HPV) infection [10]; (2) Careful screening and follow-up, active treatment of precancerous lesions [11]; (3) Early diagnosis can lead to a cure [12]. Cervical cytology was undoubtedly the best screening method, although it was the first method used for cancer screening. The purpose of cervical cytology is to detect cancer cells at early stage of cervical cancer [13]. However, the debate was on the operation of a randomized controlled trial (RCT). Most RCT was not always feasible because of the limitation of ethics and cost. It was also different between developed and developing countries [14]. As a result, cervical cancer remains one of the leading causes of cancer deaths worldwide [15], and the need for high level clinical and research evidence was still a key issue to address.

The micro-environment of malignant tumors was composed of immune cells, stromal cells, extracellular stromal molecules and inflammatory mediators [16]. The balance alteration of the immune environment resulted in immunosuppression, which allowed tumor avoidance and immune monitoring avoidance [17]. From gene expression profiles, the ESTIMATE algorithm was used to determine stromal or immune cell ratios in tumor samples [18]. The ESTIMATE algorithm has been applied to hepatocellular carcinoma [19], glioma [20] and acute promyelocytic leukemia [21] as a newly developed algorithm based on tumor micro-environment. However, whether the ESTIMATE algorithm can evaluate the prognosis of cervical cancer was still unclear.

In this study, we aimed to obtain a complete genes expression profile and summarize key genes related with micro-environment in order to predict the prognosis of cervical cancer patients.

ClustVwas was used to draw heatmaps and cluster plots.

The database STRING was used for PPI network analysis, Cytoscape software was used to reconstructed it subsequently. Cytoscape is an open source software platform for visualizing complex networks and integrating these with any type of attribute data. The connectivity degree was analyzed by The MCODE plug-in in Cytoscape of each node of the network.

The association between the DEGs and OS were illustrated by Kaplan-Meier plots. Log-rank test was applied to access the statistical significance.

We use DAVID (The Database for Annotation, Visualization and Integrated Discovery) for functional enrichment analysis of DEGs, which include their biological processes (BP), molecular functions (MF), or cellular components (CC). Meanwhile, KEGG (Kyoto Encyclopedia of Genes and Genomes) pathways analysis was also conducted in DAVID. The cut-off of false discovery rate (FDR) was 0.05.

Stromal and immune scores were particularly relevant to the clinical characters of cervical cancer. We extracted the full gene expression profiles and clinical information of all 306 cervical cancer patients from the TCGA database. The age of subjects for initial pathological diagnosis was 20~88 years, and the median age was 47.44 years. Histological types of cervical cancer in these patients included adenosquamous (6, 2.0%), squamous cell carcinoma (253, 82.6%), and adenocarcinoma (47, 15.4%). The ESTIMATE algorithm showed that the stromal score ranged from 307.40 to 2568.14, meanwhile, the immune score ranged from 1556.77 to 2086.32. In addition, the scores of stromal and immune were significantly correlated with histological type (Fig. 1A,B). To investigate possible associations between stromal or immune system scores and OS, we divided 306 cervical cancer patients into higher and lower halves (low score and high score) according to their scores. Forty-three cases with OS less than 30 days or more than 3000 days were excluded. The Kaplan-Meier survival curve (Fig. 1C) indicated that compared to patients with a low immune score, patients with high immune score had a longer median OS time (2520 vs. 2032 days, p = 0.0243). Besides, the median OS time of high stromal group was longer than the low group (2520 vs. 2052 days, p = 0.3041), although it was not statistically significant (Fig. 1D). In addition, the immune score correlated significantly with the metastatic status (Fig. 1E,F).

3.1 Comparison of DEGs via Stromal Scores and Immune Scores in Cervical Cancer

To study the relationship between gene expression profile and stromal/immune scores, we evaluated RNA-Seq data from all 306 cervical cancer patients in TCGA. We identified 1225 and 1112 DEGs in accordance with the stromal and Immune scores, respectively (Fig. 2A). We also used the heat map to delineated the DEGs of the low compared to high immune scores/stromal scores groups (Fig. 2B). Besides, we obtained 8 up-regulated genes and 471 down-regulated genes from the immune/stromal subgroup (Fig. 2C). It was worth mentioning that immune scores was superior to stromal scores in the statistically significant differences in clinical characteristics of cervical cancer (Fig. 1). Thus, the DEGs of all subsequent analysis in this study was based on immune scores. 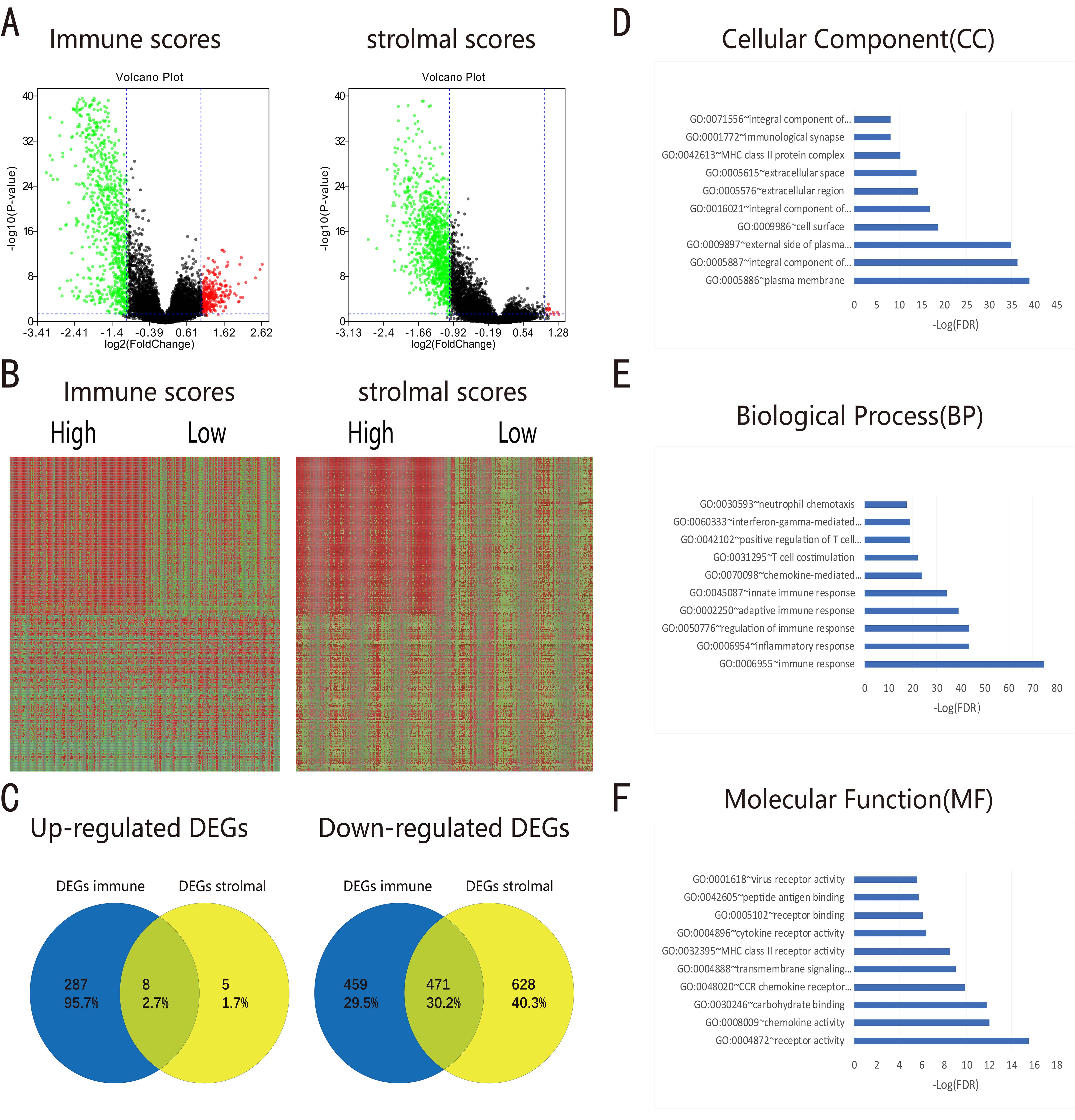 Comparison of gene expression profile with stromal scores and Immune scores in Cervical cancer. (A) The differential genes were identified based on stromal score and immune score. DEGs volcano plots of low immune score group and high immune score group/stromal score group. p 0.05 genes were expressed in red (fold change 1) and green (fold change 1) respectively. The black plots show the remaining genes (no significant difference). (B) Heat maps of the DEGs of upper half (high scores) vs. lower half (low scores) of the immune score/stromal score groups (fold change 1, p 0.05). Heat maps were made according to the mean linkage method and Pearson distance measurement method. The lower expressed genes were marked in green, while the higher expressed genes were marked in red. (C) Commonly changed DEGs in the immune/stromal groups (8 up- and 471 down-regulated genes). (D–F) Top 10 gene ontology (GO) terms. False discovery rate (FDR) of GO analysis was acquired from DAVID functional annotation tool (p 0.05).

3.2 DEGs in Predicting OS Based on TCGA

We used Kaplan-Meier survival curves to analysis the inherent roles of DEGs in predicting the OS in cervical cancer patients. The log-rank test indicated that of 930 down-regulated DEGs in the low-immune scores group, 363 (Supplementary Table 4) were positively in relation with OS (p 0.05). The characteristic genes were shown in Fig. 3. 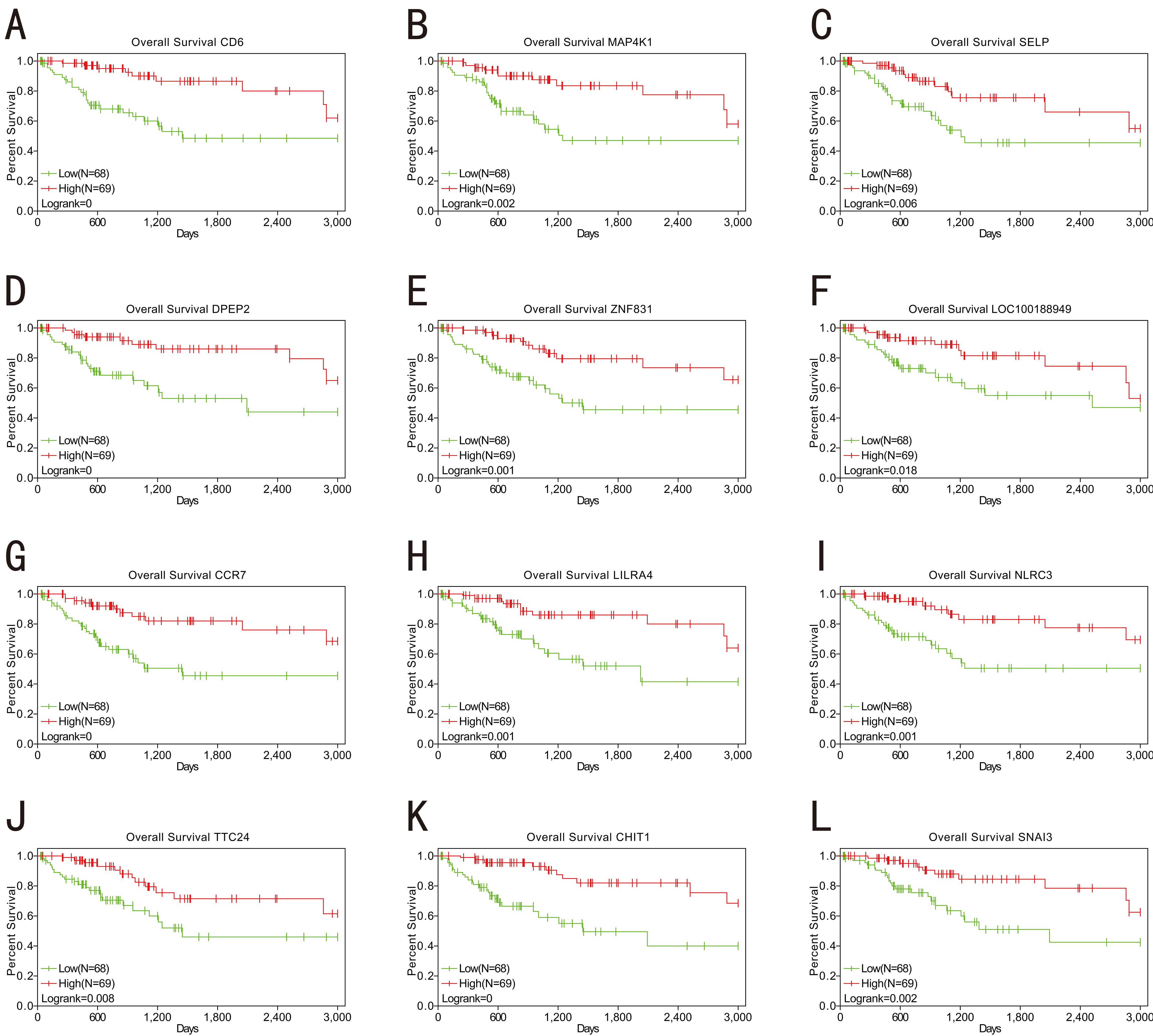 In order to investigate the interaction between determined 363 DEGs and prognostic value, we built a PPI network, which consists of 230 nodes and 1043 edges based on the STRING tool. As showed in Fig. 4, the tops four significant modules were further accessed. And these modules LCK, CCR7, GIMAP6 and CTLA4 modules were named respectively for convenience of description. For the LCK module (Fig. 4A), it was formed by 201 edges containing 24 nodes, LCK, ZAP70, CD4, CD28, and CD86 were the nodes of note among them because they were most closely connected to others of the module. For the CCR7 module (Fig. 4B), the degree values were higher for CCR7, CXCR5, CCR5, GNGT2 and CXCR6 nodes. As showed in the GIMAP6 module, several immune-related protein (GIMAP) family genes tenanted the center of it, which include GIMAP6, GIMAP5, GIMAP7, GIMAP8, and GIMAP4 (Fig. 4C). In CTLA4 module, CTLA4, CD19, FOXP3 and TYROBP had higher degree values (Fig. 4D). 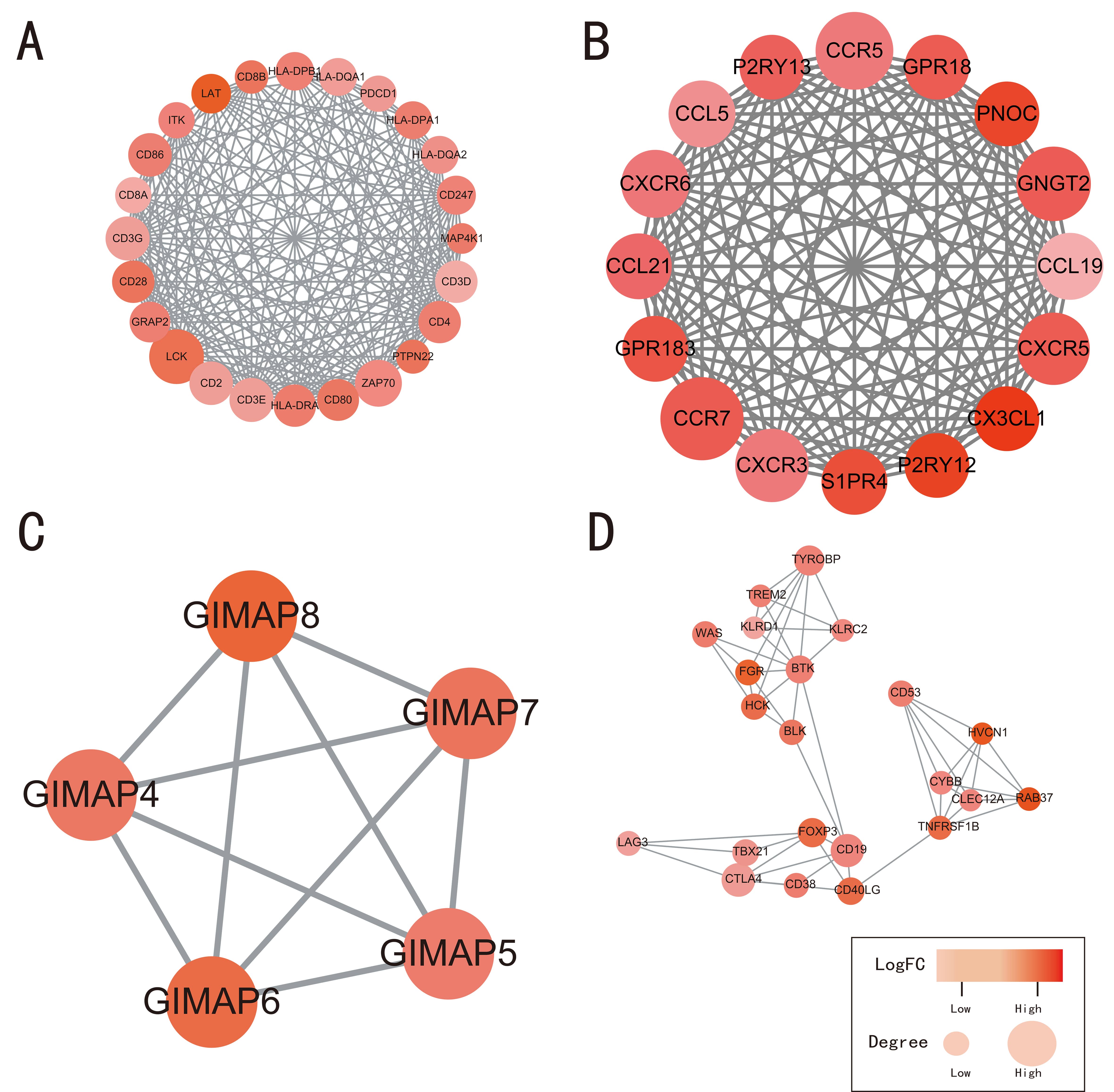 3.4 GO and Pathway Enrichment Analyses of Genes with Prognostic Value

The functional aggregation of those 363 genes were also closely related to the immune response. Totally, 10 cellular components, 41 biological processes and 9 molecular functions of GO terms were found to be important (-log FDR 1 or FDR 0.05). As showed in Fig. 5A–C, top terms consisted of external plasma membrane, immune response, adaptive immune response, and receptor activity. As showed in Fig. 5D, we analyzed all pathways through the KEGG, that indicated the correlation between primary immunodeficiency and inflammatory bowel disease. 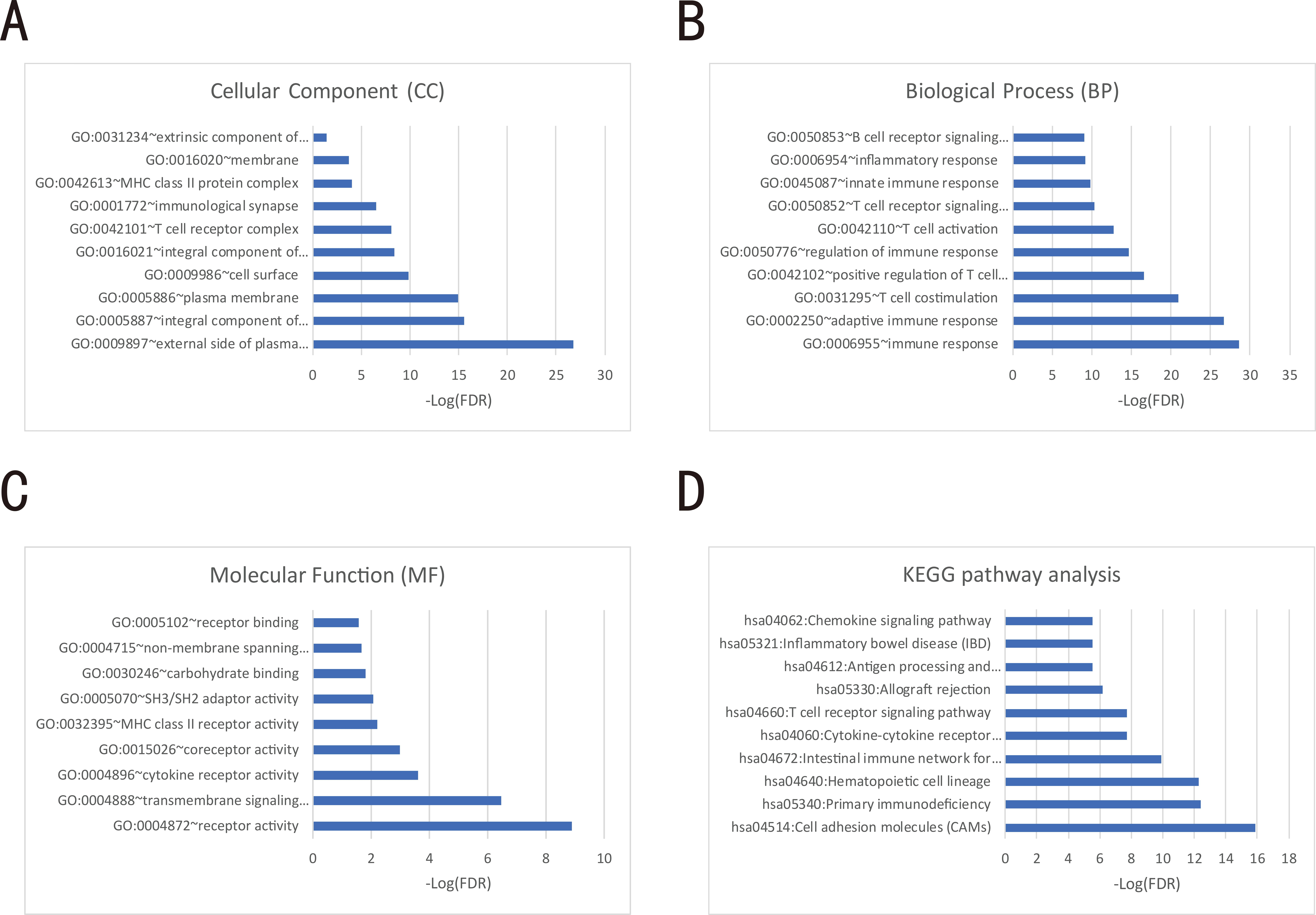 For determination of the prognostic importance of these genes among TCGA in other cervical cancer cases, we analyzed gene expression data of 300 cervical cancer cases from GEO. Based on the GSE44001 sequence, a total of 9 genes (CX3CL1, SCML4, LYZ, FGD2, SLAMF6, GIMAP7, CCL19, SELP and POU2AF1) have been shown to be significantly associated with prognosis of cervical cancer (Fig. 6). In this study, we analyzed the micro-environment of cervical cancer and identified the relevant genes with prognostic value in TCGA. We respectively identified 1225 and 1112 DEGs through stromal and immune scores. Next, we analyzed these DEGs through GO terms analysis, enrichment analysis of signaling pathway and construction of PPI network. Importantly, we also validated these potential prognostic genes in the GEO database.

First, we identified 1225 differentially expressed genes from low vs. high immune scores groups, partially showed connected with the tumor micro-environment, which was shown in Fig. 2 by GO term analysis. An algorithm named ESTIMATE was used to determine Stromal scores or immune scores for patients with cervical cancer, which indicated that these scores were particularly connect to the categorization of cervical cancer subtypes. Besides, immune scores were significantly correlated to OS in different pathological stages of cancer.

Next, we analyzed the OS of 1225 genes, and found that 363 genes were positively correlated with OS of cervical cancer. In addition, we constructed 4 PPI modules in Fig. 4, which were all associated with immune/inflammatory responses. As previously reported, the nodes in modules which were greatly interconnected that include LCK, CCR7, and GIMAP4, played an vital role in the function of mature T-cells and the selection and maturation of developing T-cells in the thymus [23, 24]. They also were regulatory factors that mediate Epstein-Barr virus (EBV) effecting on B lymphocytes [25, 26]. Moreover, these nodes played a vitally role in the regulation of apoptosis [27, 28].

Finally, we found that gene expression of 9 tumor micro-environment related genes was significantly correlated with prognosis through the validation of GEO in an independent cohort of 300 cervical cancer patients (Fig. 6). Two (LYZ and CCL19) of the 9 identified genes, were reported to be related to cervical cancer proliferation or OS prediction [29], which indicated the predictive values for our big data through analysis TCGA and GEO databases. The remaining 7 genes (CX3CL1, SCML4, FGD2, SLAMF6, GIMAP7, SELP, POU2AF1) were not obviously correlated with the cervical cancer prognosis in previous reports and their roles in cervical cancer deserve further investigation.

The gene expression profile and clinical profiles of cervical cancer patients was obtained from the TCGA (https://tcga-data.nci.nih.gov/tcga/) and GEO Datasets (https://www.ncbi.nlm.nih.gov/).

Ethics approval was not applicable because TCGA and GEO data is publicly available and without specific identifiers.