Numerous small hypoechoic cysts within the placenta can be caused by various etiologies. The common condition is molar pregnancies, most of which involve a complete mole, but a partial mole may also develop. Moreover, if there is a live fetus with numerous cystic lesions within the placenta, various possible etiologies including a twin pregnancy with a complete mole and coexistent fetus, a partial mole, confined placental mosaicism, and placental mesenchymal dysplasia (PMD) should be considered. The ultrasonographic appearances of the placenta are similar, showing multicystic lesions, in these conditions; however, it is difficult but important to differentiate these diseases because the clinical course and outcome of the diseases are quite different [1, 2]. The genetics of complete and partial mole is different; complete mole is generally associated with diploid karyotype —46,XX —of paternal origin, whereas partial hydatidiform mole usually has a triploid karyotype —69,XXX, 69,XXY or less commonly 69,XYY — and is accompanied by an abnormal fetus. A partial molar pregnancy of diploid karyotype coexisting with normal living fetus is extremely rare but has been reported [3].

PMD is a rare placental disorder characterized by multiple hypoechoic cystic appearances on ultrasonography and mesenchymal stem villous hyperplasia on histopathology [1]. PMD usually has a diploid karyotype with characteristics of progressive varicose dilatation of fetal chorionic vessels and reduced cystic lesions in the placenta after the late second trimester, on serial ultrasonographic examination.

A 30-year-old, gravida 1, para 0, twin pregnant woman visited the obstetric department with sonographic abnormal placental findings at 13 weeks of gestation. She had no medical or obstetric history. Her pregnancy resulted from ovulation induction using clomifen. She was referred to our hospital because of placental focal honeycomb appearance lesion at prenatal ultrasonography at 11 weeks of gestation. Ultrasonographic examination revealed a twin pregnancy with monochorionic diamniotic (MCDA) twins, with crown-rump length of 7.22 cm (13.3 weeks size) in twin A and 7.01 cm (13.1 weeks size) in twin B. There were no structural anomalies in either fetus (Fig. 1A–B). The single placenta was located in the right lateral and posterior wall of the uterus with a dividing thin membrane (Fig. 1A); however, the right side of the placenta from twin A, showed multiple hypoechoic cystic appearances with the size of the cystic area being 6 3 1 cm (Fig. 1C). Sonographic image of the placenta of twin A at 13 weeks of gestation of Case 1. (A) Twin A and the thin inter-twin membrane (arrow) is seen, which divides the two fetuses. (B) Twin B. (C) The placenta shows a partially multiple hypoechoic cystic area (arrowheads) at the right side of the placenta.

We performed chorionic villous sampling at both normal placenta and abnormal placenta sites at 13 weeks of gestation to confirm karyotype. The chromosomal study revealed normal diploid karyotype —46,XY— in both normal and abnormal placentas. We excluded confined placental mosaicism. We performed genetic amniocentesis again at 16 weeks of gestation to re-confirm diploid karyotype, even though partial molar pregnancies can exist with a living fetus. This also revealed the same normal karyotype. With these findings, our preferential prenatal diagnosis was a partial molar pregnancy with normal diploid karyotype in MCDA twin pregnancy. At 20.5 weeks of gestation, the patient was admitted to the emergency department with acute abdominal pain and vaginal bleeding, and spontaneous abortion occurred. There was no gross abnormality in either neonate. The placenta measured 17 14 2 cm and weighed 216 g. On the maternal surface, the disc was covered with multiple cysts that contained yellow serous fluid (Fig. 2A). Histopathological examination conducted and P57 immunohistochemical staining showed focal positive results in the nuclei of cytotrophoblast and villous stromal cells. Ki-67 staining revealed more than 30% positivity in the cytotrophoblasts, and E-cadherin showed less than 15% in the cytotrophoblasts. These features were compatible with the diagnosis of a partial hydatidiform mole (Fig. 2B–E). A 38-year-old, gravida 2, para 0, twin pregnant woman was referred to hospital at 15 weeks of gestation due to abnormal placental lesion and fetal growth restriction in twin A. Ultrasound examination revealed dichorionic diamniotic twin fetuses. The estimated fetal weight (EFW) of twin A was 119 g (12 percentile) without structural abnormalities, and widespread multiple small cystic lesions were seen in the placenta (Fig. 3A). Twin B fetus also showed normal growth, EFW was 146 g (67 percentile) without structural abnormalities, and there were no visible placental lesions (Fig. 3B). Chorionic villous sampling had already been done at a local hospital at 11 weeks of gestation due to abnormal ultrasonography finding of the placenta in twin A and cystic hygroma in twin B. The result was 46,XX,t(11;22)(q23.2;q11.2) in twin A and 46,XY,t(11;22)(q23.2;q11.2) in twin B. With diploid karyotype results, we suspected PMD rather than the partial hydatidiform mole. On serial ultrasonography, placental multicystic lesions in twin A gradually reduced in size and shape; however, numerous dilated and tortuous chorionic vessels abruptly developed at 31 weeks of gestation (Fig. 3C–F). The fetal growth of twin A was slow and showed small-for-gestation (EFW was 1446 g [9.3 percentile]) at 32 weeks of gestation; however, there were no apparent fetal abnormalities in both fetuses. At 33 weeks of gestation, the patient had a sudden headache and high blood pressure. Emergency cesarean section delivery was performed due to severe preeclampsia and fetal growth restriction in twin A at 34 weeks of gestation. Neonate A was female and weighed 1400 g (3 percentile) with Apgar scores of 7 and 8 at 1 and 5 minutes, respectively. Neonate B was male and weighed 1600 g (3rd–10th percentile) with Apgar scores of 7 and 8 at 1 and 5 minutes, respectively. After delivery, all newborns were admitted to the Neonatal Intensive Care Unit (NICU), and chromosomal studies were performed. The results were the same as the previous chorionic villous sampling results. They were discharged without complications one month after birth. The gross findings of twin A placenta revealed marked dilatation of chorionic vessels on the fetal surface and numerous grape-like multicystic vesicles on the maternal surface (Fig. 4). Microscopic examination of a placenta with PMD showed markedly dilated chorionic plate vasculature. Abnormally enlarged stem villi having myxomatous stroma showed thick-walled vessels with multifocal thrombi. Trophoblastic proliferation was absent. Diffuse p57 immunohistochemical staining was observed in the villous cytotrophoblast. Histopathologic examination of the placenta confirmed the diagnosis of PMD in the placenta of twin A (Fig. 5). 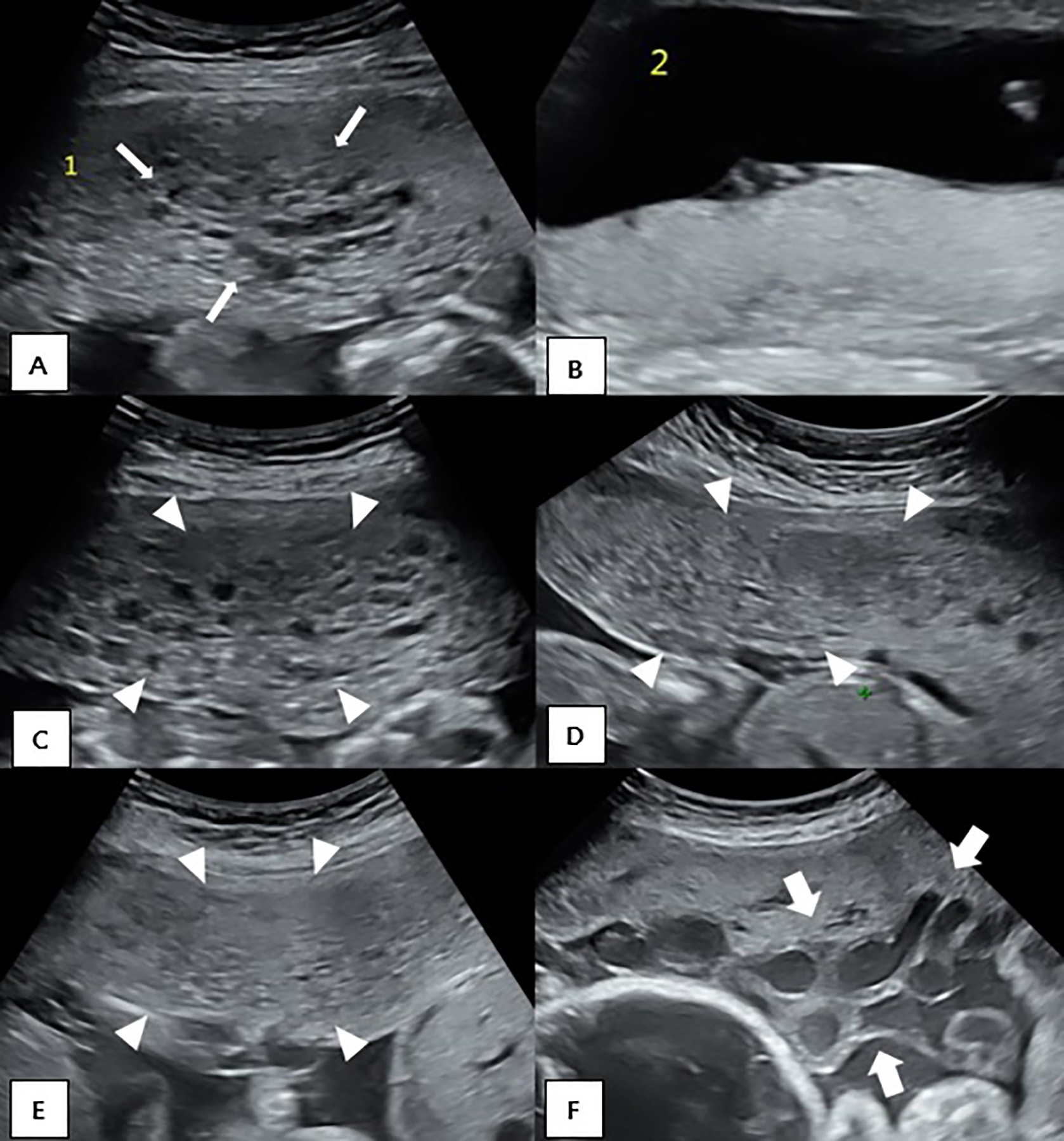 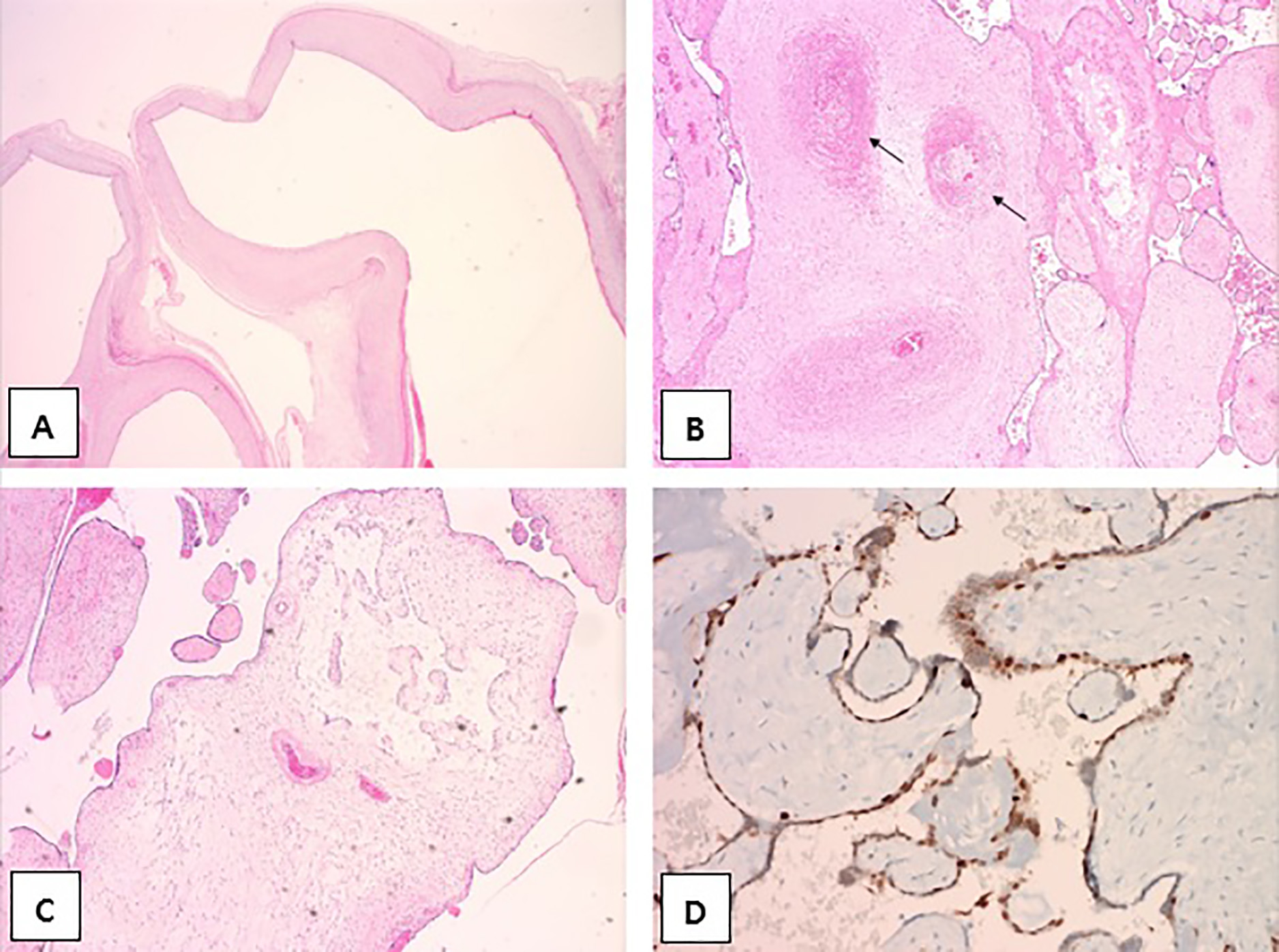 Hydatidiform mole is a trophoblastic neoplasm characterized by the proliferation of trophoblasts and hydropic degeneration of villi. Two types are observed; one is the complete hydatidiform mole, and the other is the partial mole [4]. In cases of hydatidiform mole, the coexistent live fetus is extremely rare but can be formed by either a complete mole with a live twin fetus or a partial mole with an abnormal triploid fetus. The outcome of a live fetus with a coexistent mole has a higher frequency of severe complications such as spontaneous abortion, intrauterine death, preterm delivery, fetal growth restriction (FGR) [5]. Veronica et al. [6] have reported prenatal diagnosis and pregnancy outcomes for 13 cases of twin pregnancies with complete hydatidiform mole and coexistent normal fetus. According to this study, five women delivered a live baby but preterm delivery with an average gestational age of 31 weeks (range 26–37 weeks) [6]. Also, there is a high risk of maternal complications such as: preeclampsia, thyrotoxicosis, and hemorrhages with severe anemia [5]. However, there can be differences between the complete and partial moles. The fetus with a coexistent complete mole has a chance of survival because the fetus usually has no anomalies, while the abnormal triploid fetus of partial mole tends to end in spontaneous abortion [4]. With a partial mole, the fetus may have growth restriction, a wide variety of structural abnormalities, and will die in the 1st trimester due to a lethal fetal abnormality [2]. Because a living fetus with a hydatidiform mole has poor outcomes, it is difficult to determine whether to provide immediate intervention or conduct expectant management. Most authors concluded that termination is not indicated in the cases of a partial mole if the fetus is normal [7]. Twin pregnancy with a complete mole with a live fetus also can be continued if there are no fetal anomalies or maternal complications [8].

PMD is a rare placental vascular anomaly without trophoblast proliferation, characterized as mesenchymal hyperplasia in stem villi. It was first described by Moscoso et al. [9] in 1991 as placentomegaly that produces the image of partial hydatidiform mole with elevated alpha feto-protein levels. Most PMD cases have normal karyotypes, but that was associated with preterm labor (33%), fetal growth restriction (33%), and fetal death in utero or neonatal death (13%) [1]. Twenty-three percent of the cases of PMD are associated with Beckwith-Wiedemann syndrome, characterized by macrosomia, macroglossia, omphalocele, exomphalos, internal visceromegaly, and increased incidence of childhood tumors [10].

With these various conditions of the placental molar lesion with a live fetus, the differential diagnosis is important. It is essential to recognize the detailed features of PMD and molar pregnancy and to distinguish the disease to prevent unnecessary termination of pregnancy. Pathology, karyotyping, and serial sonographic examination play a key role in distinguishing PMD and molar pregnancy. In pathologic evaluation, the proliferation of trophoblasts is seen in hydatidiform mole, but mesenchymal stem villous hyperplasia is seen in PMD. Twin gestations with complete mole and coexisting normal fetus can easily be misclassified as a partial mole because there are two populations of villi (molar villi from the complete mole and normal villi from the normal twin) [11]. Among them, P57 expression is very useful in the differential diagnosis of the complete mole and partial mole [12]. In chromosomal analysis, the fetal karyotype is usually normal (biparental diploid, 46 chromosomes, one set from each parent) in PMD, diploid karyotype (purely androgenetic) in the complete mole, and triploid karyotype (biparental) in the partial mole. However, a partial mole could coexist with a fetus with a diploid karyotype rarely reported [13]; In case 1 also revealed to have a diploid karyotype with a partial mole. We performed chorionic villus sampling (CVS) and amniocentesis for karyotype, but the possibility of mosaicism should be considered [14].

The serial ultrasonographic examination helps to diagnose PMD. The multiple cystic lesions in the placenta seen in early gestation gradually decreased with gestation; however, varicose dilatation of fetal chorionic vessels develop during the late second trimester in most cases of PMD [15].

In cases of partial mole with a diploid normal fetus, complete mole with a live fetus, and PMD pregnancy, the continuation of pregnancy can be an acceptable option because the fetus has a chance of survival, although the outcome of pregnancy can be poor. Once the suspected diagnosis has been established, the patient should be informed and advised about the potential fetal and maternal risks. Moreover, close monitoring during pregnancy and postpartum period is needed when continuation of pregnancy is desired.

Numerous hypoechoic cysts in the placenta on prenatal ultrasonography with a normal live fetus warrants chromosomal analysis and serial ultrasonographic examination to differentiate between PMD and molar pregnancy with a coexisting normal fetus to avoid unnecessary termination.

The study was conducted in accordance with the Declaration of Helsinki, and the protocol was approved by the Institutional Review Board of Inje University Busan Paik Hospital (approval number: 19-0208). This patient gave their informed consent they participated in the case report.

Sonographic image of the placenta of twin A at 13 weeks of gestation of Case 1. (A) Twin A and the thin inter-twin membrane (arrow) is seen, which divides the two fetuses. (B) Twin B. (C) The placenta shows a partially multiple hypoechoic cystic area (arrowheads) at the right side of the placenta.