SLE is a multisystem autoimmune disorder that predominantly occurs in women of reproductive age [1]. Those with early disease onset, in their late teens or early 20s, often need to take immunosuppressive drugs or steroids for a prolonged period. Pregnancy is a complex and sophisticated immunological adaptation process involving the fetal-maternal interface. Among patients with SLE, those with active disease, especially renal involvement, exhibit significantly increased fetal and maternal morbidity and mortality during pregnancy, whereas those not experiencing a flare have a low risk of obstetric complications [2,3]. Adverse pregnancy outcomes of patients with SLE include preeclampsia, preterm delivery, pregnancy loss, and intrauterine growth restriction [1]. Higher incidences of maternal death, thrombosis, infection, and hematologic complications have been reported in pregnant women with SLE than in those without it [1]. Placental abnormalities and uterine wall complications have also been reported in a few SLE cases [4,5]. Unpredicted placental abnormalities or uterine rupture, threatening fetal well-being and causing massive maternal bleeding, is a tragic outcome for both obstetricians and patients. We experienced two cases of placental abnormalities or uterine rupture in patients with SLE, necessitating cesarean hysterectomy and leading to massive hemorrhage that required large transfusions.

A 33-year-old pregnant woman, gravida 1, para 0, presented to the emergency department at 34 + 3 weeks’ gestation with the complaint of diffuse abdominal pain for 7 hours. Her vital signs were stable, except an elevated heart rate of 120 beats per min. During pregnancy, her routine obstetrical check-up had been unremarkable. She had been diagnosed with SLE 10 years ago; since then, she had been taking low-dose steroids until now. She had a history of laparoscopic right ovarian cystectomy that was performed due to hemoperitoneum caused by corpus luteum cyst rupture 3 years prior to presentation. Her initial lab findings on presentation were normal, with no anemia (hemoglobin, 12.4 g/dL), thrombocytopenia, or abnormal renal function. Test findings for antiphospholipid antibodies were negative. We performed a non-stress test; it revealed good fetal variability and no uterine contractions. Ultrasound findings showed that the estimated fetal weight was appropriate for the gestational age, amniotic fluid volume was > 10 cm, and the umbilical Doppler index was in the normal range; however, a small fluid collection was seen in the mother’s abdominal cavity around the uterus and bladder with no ovarian cyst. After 1 h of continuous fetal monitoring, a repeat ultrasound revealed increased intra-abdominal fluid collection that was interpreted as hemoperitoneum (with up to 50 cc of fluid) (Figure 1), and the patient complained of increasing abdominal pain. Therefore, we decided to perform an emergency cesarean section. The procedure was performed under spinal anesthesia, and a significant hemoperitoneum, with > 500 cc of fluid, was noted following skin incision. The usual method was used for cesarean section. After fetal delivery, it was difficult to remove the placenta. Upon checking the uterus, we found a small (approximately 2 cm) hole in the uterine fundus, revealing uterine rupture that was the focus of the hemoperitoneum (Figure 2). We tried to remove the entire placenta; however, uterine contractions were poor, with the placenta being strongly adhered to the posterior uterine wall. Thus, it was difficult to entirely remove the placenta, and the condition was diagnosed as placenta accreta. At this point, urgent subtotal hysterectomy was performed. Intraoperatively, 5 units of packed red blood cells (RBCs) and 2 units of fresh frozen plasma (FFP) were transfused, and postoperatively, 1 unit of FFP and 8 units of platelets were transfused. Histopathological examination revealed partial invasion of the chorionic villi into the myometrium, resulting in placenta accreta, near the site of uterine rupture. The patient recovered well and was discharged on the fifth postoperative day without any complications. 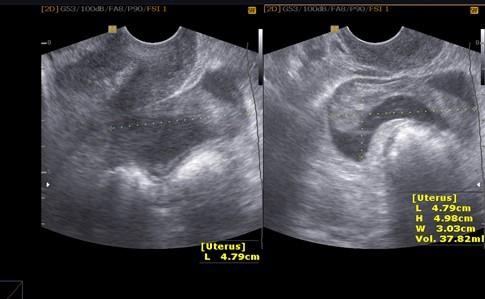 — In case 1, the patient complained of increasing abdominal pain, and repeat ultrasound revealed increased intra-abdominal fluid collection that was interpreted as hemoperitoneum (with up to 50 cc of fluid). 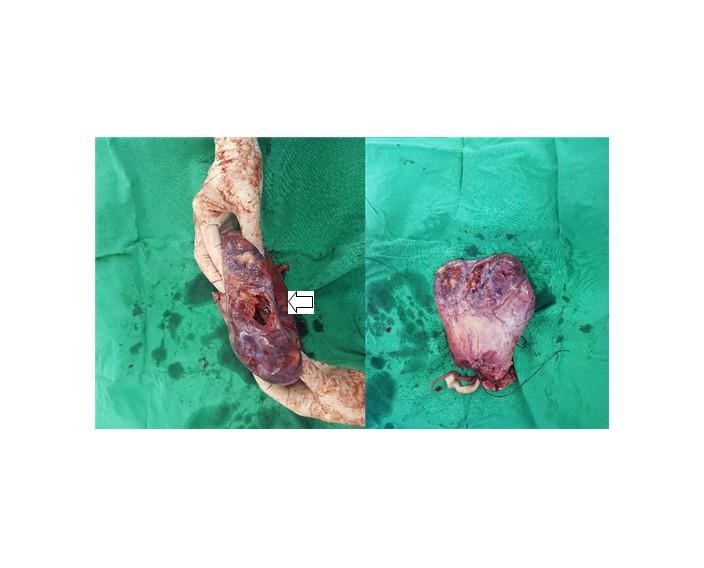 — In case 1, a gross photo of the uterus. After fetal delivery, it was difficult to remove the placenta. Upon checking the uterus, we found a small (approximately 2 cm) hole (arrow) in the uterine fundus, revealing uterine rupture that was the focus of the hemoperitoneum.

A 30-year-old woman, gravida 1, para 0, visited our obstetric outpatient clinic for a routine check-up at 7 weeks’ gestation. She had been diagnosed with SLE 8 years ago and had been taking low-dose steroids for a long time to control the disease activity; she had no surgical history. Furthermore, she had no lupus nephritis-related complications, and test findings for antiphospholipid antibodies were negative. During pregnancy, her condition was stable; the ultrasound findings of the uterus, placenta, and fetus were unremarkable, and her vital signs were in the normal range. At 30 weeks’ gestation, she complained of intermittent, squeezing epigastric pain. We considered it to be gastroesophageal reflux disease and recommended observation with lifestyle modification. At 38 weeks’ gestation, she underwent elective cesarean section because of fetal breech presentation. The procedure was performed under spinal anesthesia; following fetal delivery, it was difficult to remove the placenta. Upon close observation of the uterus, we detected placenta increta of the uterine fundus. The uterus could not be salvaged because there was almost no uterine myometrial layer remaining, with the placenta being covered only by the uterine serosal layer, resulting in massive bleeding. Therefore, we immediately performed cesarean hysterectomy. Intraoperatively, the patient required massive transfusion with 4 units of packed RBCs and 3 units of FFP. Histopathological examination revealed that the chorionic plate had infiltrated the entire thickness of the uterine myometrium, resulting in placenta increta. Postoperatively, she recovered well and was discharged on the seventh postoperative day without any complications.

Abnormal placentation is well known to cause significant maternal and neonatal morbidity and mortality, and its incidence has been increasing [6]. Placenta accreta is a generalized term used in cases where all or a part of the placenta attaches abnormally to the myometrium. The abnormal placental attachment is classified into three types depending on the depth of attachment and degree of invasion into the uterine muscular layers: accreta, increta, and percreta [7]. The commonly known risk factors for abnormal placentation are a uterine scar due to a previous cesarean section or placenta previa. Other risk factors include increased maternal age, multiparity, other prior uterine surgery, prior uterine curettage, uterine irradiation, endometrial ablation, uterine synechiae, uterine leiomyomata, uterine anomalies, hypertensive disorders of pregnancy, and smoking [4].

In case 1, there were no risk factors for placenta accreta or uterine rupture, but the patient had SLE and had been taking low-dose steroids for a prolonged duration. We were concerned about uncommon but possible pregnancy complications such as preeclampsia, preterm labor, and fetal growth restriction [8,9]; however, she experienced uterine rupture with hemoperitoneum and underwent emergency cesarean delivery and subsequent hysterectomy. We emphasize that there is a possibility of uterine rupture in pregnant woman with SLE and prolonged use of steroids, even if low dose [4,5,7,10,11]. Low estrogen levels induced by pregnancy may lead to insufficient uterine growth, especially in case of rapid fetal growth, and increased amniotic fluid volume after the second trimester [5]. Moreover, prolonged use of steroids can cause impaired protein synthesis and thinning of uterine wall muscle layer [10,11]. Namita et al. reported that lupus itself could cause a marked thinning of myometrium in the entire uterus [4]. Thus, as pregnancy progresses, uterine expansion may be inadequate, leading to uterine rupture. But we are not sure that the cause of abnormal placentation is only due to steroids or lupus, or synergic effects of steroids and lupus. Further study would be needed.

In case 2 as well, there were no risk factors for placenta accreta. Although, the patient complained of intermittent epigastric pain after the second trimester, we considered it to be due to gastroesophageal reflux, which is commonly seen in pregnant woman. Surgical findings included placenta increta at the uterine fundus and general thinning of the uterine muscle wall layer (the site of pain). She experienced massive bleeding, necessitating cesarean hysterectomy. We believe that in pregnant women with SLE, abnormal placentation needs to be considered and preparations to manage significant perioperative bleeding must be made to ensure optimal treatment. We think that the possibility of development of placenta percreta is high in patients with connective tissue disease, depending on the extent to which the placenta is attached to the uterus. Maternal autoantibody complexes at the maternal-fetal interface are associated with pregnancy-related complications. Autoimmune complex accumulation at the placentation site leads to abnormal placental development as villous tissues are anchored to the uterus without the intervening decidual cells due to a deficiency of decidua [4,7]. Moreover, it is known that prolonged steroid therapy can cause a decrease in natural killer cell numbers in the uterus, thereby negatively affecting uterine spiral artery maturation during placentation [12,13].

In our opinion, the possibility of abnormal placentation and uterine rupture as well as preeclampsia, preterm labor, and fetal growth restriction needs to be considered in pregnant women with SLE who have been taking steroids, even if low dose, for prolonged periods and who do not have any other risk factors.

This study was approved by the Research Ethics Committee of Kyungpook National University Hospital (Ethical approval number: KNUH 2020-07-045). All participants were informed of the purpose of this study, and written consent was obtained from each participant prior to sample collection.

— In case 1, the patient complained of increasing abdominal pain, and repeat ultrasound revealed increased intra-abdominal fluid collection that was interpreted as hemoperitoneum (with up to 50 cc of fluid).