Coronary heart disease (CHD) is the leading cause of death worldwide [1]. CHD includes all heart diseases caused by coronary atherosclerosis or spasm, resulting in blood vessel stenosis or obstruction, leading to myocardial ischemia, angina, and myocardial infarction [2]. The traditional treatments recommended by the guidelines include anti-inflammatory, anti-platelet, and lipid-lowering agents, -receptor blockers, calcium channel blockers, renin-angiotensin system inhibitors, and controlling all risk factors. Although rigorous interventions such as percutaneous coronary intervention (PCI) and coronary artery bypass grafting (CABG) have been implemented in clinical practice, exercise intolerance and other psychological disorders continue to be prevalent in the vast majority of CHD patients [3, 4, 5, 6].

Exercise-based cardiac rehabilitation (CR) significantly improves exercise capacity for patients with CHD, and is considered a Class Ia recommendation by international guidelines [7, 8]. Previous studies had reported that CR is a safe and effective intervention to improve exercise capacity and quality of life in patients with CHD [9, 10, 11]. Improvements in exercise capacity significantly reduce all-cause and cardiovascular mortality by up to 20%–25%. The benefits of reducing cardiovascular risk factors on quality of life have also been established for CHD patients [12, 13]. Despite these well-known benefits, participation in CR programs remains low [14, 15]. Traditional Chinese medicine (TCM) has recently been shown to be advantageous in treating CHD. Hence, integrated Chinese and Western medicine treatments combined with exercise-based CR may improve exercise capacity in patients with CHD.

According to the theory of TCM, Qi deficiency and blood stasis (QDBS) is the most common syndrome in patients with CHD [16]. Many herbal formulas and extracts are used to tonify Qi and nourish Yin in the clinic, such as Astragalus membranaceus Ginseng, and Codonopsis pilosula. Yangxinshi (YXS) tablet, which consists of thirteen kinds of chemical compounds, is widely used to treat patients with CHD and heart failure based on the theory of Reinforcing Qi and Activating Blood [17]. Since limited research is available for TCM in improving exercise capacity for patients with CHD, we conducted a randomized, double-blind, placebo-controlled, multicenter trial to demonstrate whether the YXS tablets can be a suitable adjunct to exercise-based CR for improving exercise capacity and quality of life in patients with CHD.

The design, criteria, and study procedure has been described in the published protocol (Trial registration:ClinicalTrials.gov with the ID NCT03478332) [18]. Patients were recruited from Three-Grade A-level hospitals in mainland China, including the Affiliated Hospital of Changchun University of Traditional Chinese Medicine, Tongji Hospital Affiliated with Shanghai Tongji University, and Jinqiu Hospital in Liaoning Province. CHD was rated by the Canadian Cardiovascular Society grading of angina pectoris (CSS). In order to obtain a significant difference between groups (a = 0.05, power of 80%), a minimum of 30 patients in each group was needed.

All eligible patients signed an informed consent and were then randomly allocated to the intervention group (YXS group) and control group (placebo group) at a ratio of 1:1 with blinding to both patients and investigators. All patients received standard treatment for CHD, including angiotensin-converting enzyme inhibitor (ACEI) or angiotensin receptor blocker (ARB), beta-blockers, calcium antagonistsand, anti-platelet aggregation, and or statins, combined with exercise-based CR in the hospital for 12 weeks. Other similar Chinese patent medicines were prohibited during the trial period. Eligible patients receive three tablets of YXS or placebo (sponsored by Qingdao Growful Pharmaceutical Co.Ltd. Qingdao, Shandong Province, China) three times a day for 12 consecutive weeks.

Aerobic exercise training included in the CR program was performed three days per week for 12 weeks. Each session lasted for 30 minutes, and all participants were instructed to exercise on a cycle ergometer or treadmill. The target heart rate was obtained by cardiopulmonary exercise testing (CPET). A trained physiotherapist closely supervised the CPET. The training intensity was determined based on the recorded during the CPET examination. Warm-up and cool-down periods were performed in accordance with American College of Sports Medicine guidelines [19]. All the participants were supervised by the CR team consisting of cardiologists, trained physiotherapists, and nurses.

CPET and 6MWT evaluated exercise capacity. CPET was performed in accordance with the Exercise Standards for Testing and Training from the American Heart Association [20, 21]. 6MWT was performed in a 30 m corridor, following the guidelines of The American Thoracic Society [22]. The primary expression of exercise capacity is peak oxygen uptake (VO), determined by the symptom-limited CPET, which was performed with the Bruce protocol on a bicycle ergometer (Schiller, Switzerland), as previously described. Continuous monitoring with a 12-lead electrocardiogram and breath gas exchange was recorded during the test. Blood pressure was measured every five minutes. Once patients felt exhausted or the monitor showed abnormal signals, the test was ended. Peak VO was determined as the mean value of VO observed during the last 30 s of the exercise test. The anaerobic threshold (AT) was calculated using the V-slop method [23]. A metabolic equivalent (MET) is defined as the consumption of oxygen under the resting state of an adult, which is a good predictor of survival in a healthy person [24, 25]. The average MET without exercise is about 3.5 mL/kg/min, with the standing MET rate approaching 4.0 mL/kg/min.

Peak VO and anaerobic metabolic threshold oxygen consumption (AT-VO) were the gold standards to evaluate exercise tolerance [26, 27]. The difference in walking distance (in meters) during 6MWT was also calculated.

Patients’ weight and height were measured with a calibrated scale to calculate the body mass index (BMI) value. An automatic sphygmomanometer measured blood pressure and heart rate from the non-dominant arm (J750L, Omron, Osaka, Japan). All participants were instructed to remain at a stabilization time of at least 10 min before the test. We performed the measurement twice and then calculated the mean value as the measurement value.

The definition of AE was the appearance or deterioration of any syndrome, symptom, or disease that may affect participants’ health during the trial period. This may be a new disease, degeneration of symptoms, treatment, or a combination of one or more factors. The supervisor carefully recorded all the details, such as manifestation, occurrence time, duration, and degree of AE. Once an AE occurreds, researchers immediately provided optimal medical treatment. Any AE was submitted to the ethics committee within 24 hours.

Data were analyzed by SAS software Version 9.4 (SAS Institute, Cary, NC, USA). Categorical variables were expressed as a percentage, while distributed continuous variables were expressed as mean standard error. Differences within the groups were analyzed using and the paired t-test, and differences between groups used an independent sample t-test. All statistical tests were two-tailed, and p-values 0.05 were considered statistically significant. 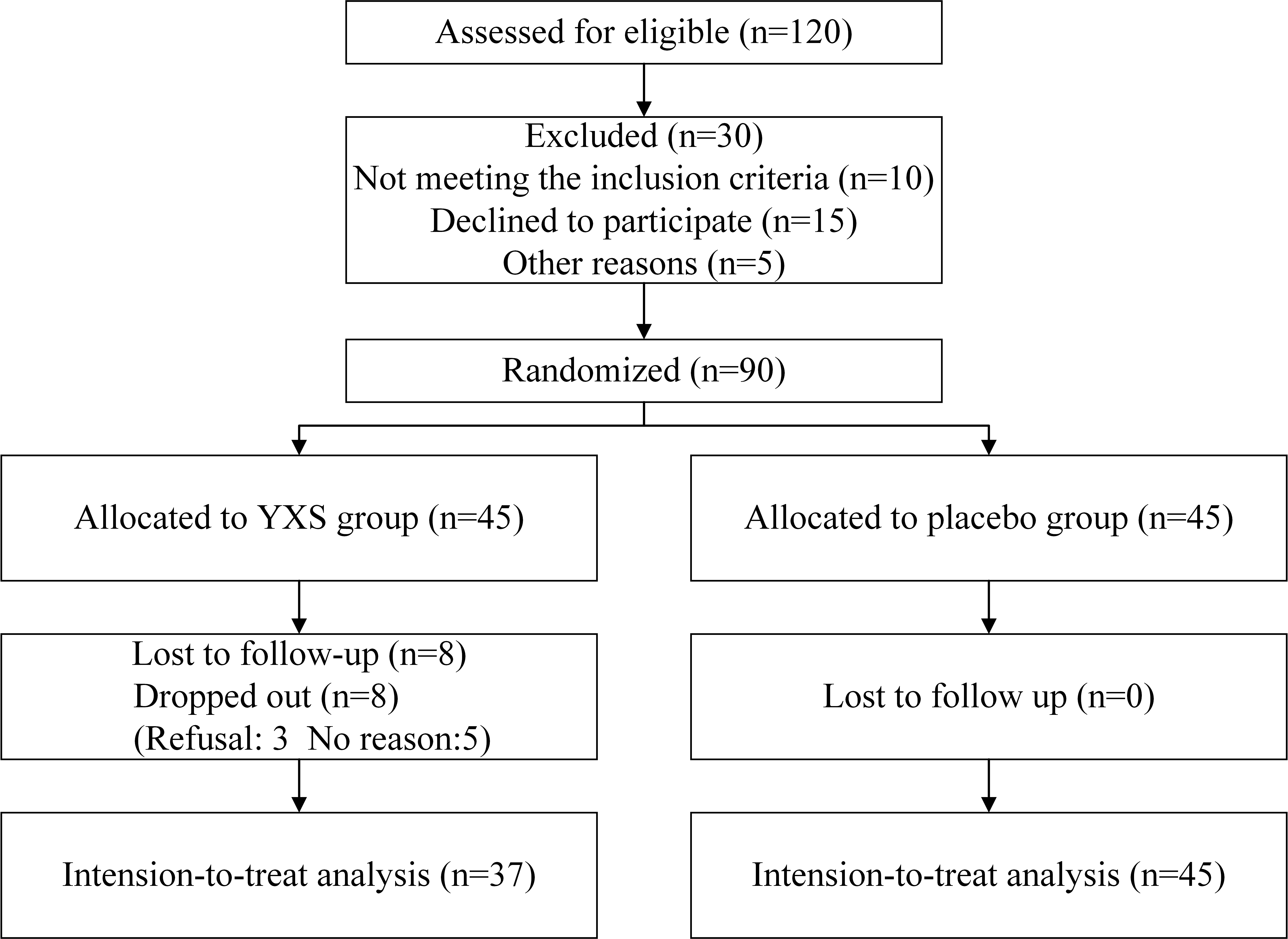 Flowchart of the study.

Table 2 presents the exercise capacity results from baseline to 3 months between the groups. Treatment with YXS tablets was associated with a significant improvement in the distance of 6MWT compared to placebo (mean difference 29.92, 95% CI 18.78–41.07, p 0.001).

Table 2.Exercise capacity comparison between the YXS group and the placebo group.

There was no significant difference in anxiety and depression scores between the two groups (p 0.001, Table 3). However, compared within groups, both YXS and placebo groups had a significant decrease in HAD-A (Pyxs = 0.007, Pplacebo = 0.012).

Table 3.Anxiety and depression comparison between the YXS group and the placebo group.
3.3 Safety Analysis

There were no patients who had adverse events during the period of the trial. There were no significant ECG or physical examination findings or changes in laboratory parameters associated with the experimental drugs.

This trial was designed to evaluate the effect of adjunctive YXS tablets on exercise-based CR in patients with CHD and the underlying mechanisms of TCM in improving exercise capacity.

It is well known that (GLU) is the primary energy source for the heart; GLUT4 transports glucose to the mitochondria for utilization [40]. Ginseng and Salvia miltiorrhiza can increase glucose uptake via the GLUT4 and Adenosine 5’monophosphate-activated protein kinase (AMPK) signaling pathways in vivo [41, 42]. The active compound of Coptis Chinensis, Berberine can moderate glucose metabolism via the AMPK/peroxisome proliferator-activated receptor coactivator (PGC)-1ɑ/GLUT4 pathway [43]. The compounds in the YXS tablets are involved in glucose metabolism, which suggests that this is a potential therapeutic strategy for exercise intolerance. Multiple mechanisms contribute to the benefits of the YXS tablets in improving exercise capacity. A significant difference in peak VO (YXS group: 0.22 L/min vs placebo group: 0.01 L/min, p = 0.000) was found in our study at 12 weeks; in addition, the YXS group increased the walking distance by about 50 m, which is a significant improvement [44]. This study has demonstrated a positive effect on exercise capacity. Increased peak VO could delay disease progression and improve disease prognosis for patients with CHD. As reported in a previous study, the improvements in peak VO after 12-week CR programs are around 10–20% and significantly impact mortality and CV prognosis. These results are clinically meaningful, as it reported that 1/kg/min improvement in VO peak during a CR program had been associated with a 6% reduction in hospital readmissions and a 13% reduction in all-cause mortality [45, 46].

However, no difference was found in anxiety and depression between groups, indicating that the improvement of exercise capacity by YXS tablets might not be necessarily related to an improvement in psychological parameters. There are several possible reasons for this. First, the population included in both the YXS and placebo groups had lower baseline HAM-A (5.63 vs 6.98) and HAM-D (6.17 vs 8.18) scores, indicating no/minimal anxiety and depression. Second, our trial was only conducted for three months, which may not be a sufficient time to notice improvements in anxiety and depression. Additionally, the lack of psychological rehabilitation intervention, including patient education, may contribute to these outcomes during the intervention period.

The moderate sample size and the single ethnic patient group are recognized as limitations of this study and will need to be verified in larger studies enlisting multiple ethnic populations.

The limitations of this study include the differences between groups at the baseline, such as sex and height. A randomized controlled trial with a larger sample size could help eliminate such biases in the future.

All subjects gave their informed consent for inclusion before participating in the study. The study was conducted in accordance with the Declaration of Helsinki, and the Ethics Committee approved the protocol of the Affiliated Hospital of Changchun University of Traditional Chinese Medicine (2015R002089), Tongji Hospital Affiliated with Shanghai Tongji University (No.427), and Jinqiu Hospital in Liaoning Province.

The authors thank the patients for participating in this trial and all the research staff at each hospital site for data collection and analysis.

Flowchart of the study.