Type 2 diabetes mellitus (T2DM) has been widely proven to be one of the most significant risk factors for CVD [5]. The key mechanism of T2DM is insulin resistance (IR), which has been shown to be closely associated with the development of CVD and atherosclerosis [6, 7, 8, 9]. However, as the gold standard test for IR, the hyperinsulinaemic-euglycaemic clamp is time-consuming, expensive and complex [10], the triglyceride-glucose index (TyG index) is an alternative method, which evaluates IR by using the levels of glycemia (mg/dL) and fasting triglycerides (TG) (mg/dL) [11]. Studies have indicated that TyG index was associated positively with T2DM risk [12, 13, 14, 15]. Notably, previous studies have manifested that TyG index was related to the increased risk of worse outcomes in patients with CVD. Zhao et al. [16] recently demonstrated that TyG index had a prognostic role in patients with T2DM and non‑ST‑segment elevation acute coronary syndrome (NSTE-ACS) undergoing percutaneous coronary intervention (PCI). In addition, high TyG index was also proved to be associated with increased incidence of CVD events in healthy Caucasian and China participants [17, 18, 19]. Nevertheless, to the best of our knowledge, no research has demonstrated the effect of TyG index in patients with severe CVD. Thus, our main objective in this study was to investigate the relationship between TyG index and in-hospital mortality of critically ill patients with heart disease. 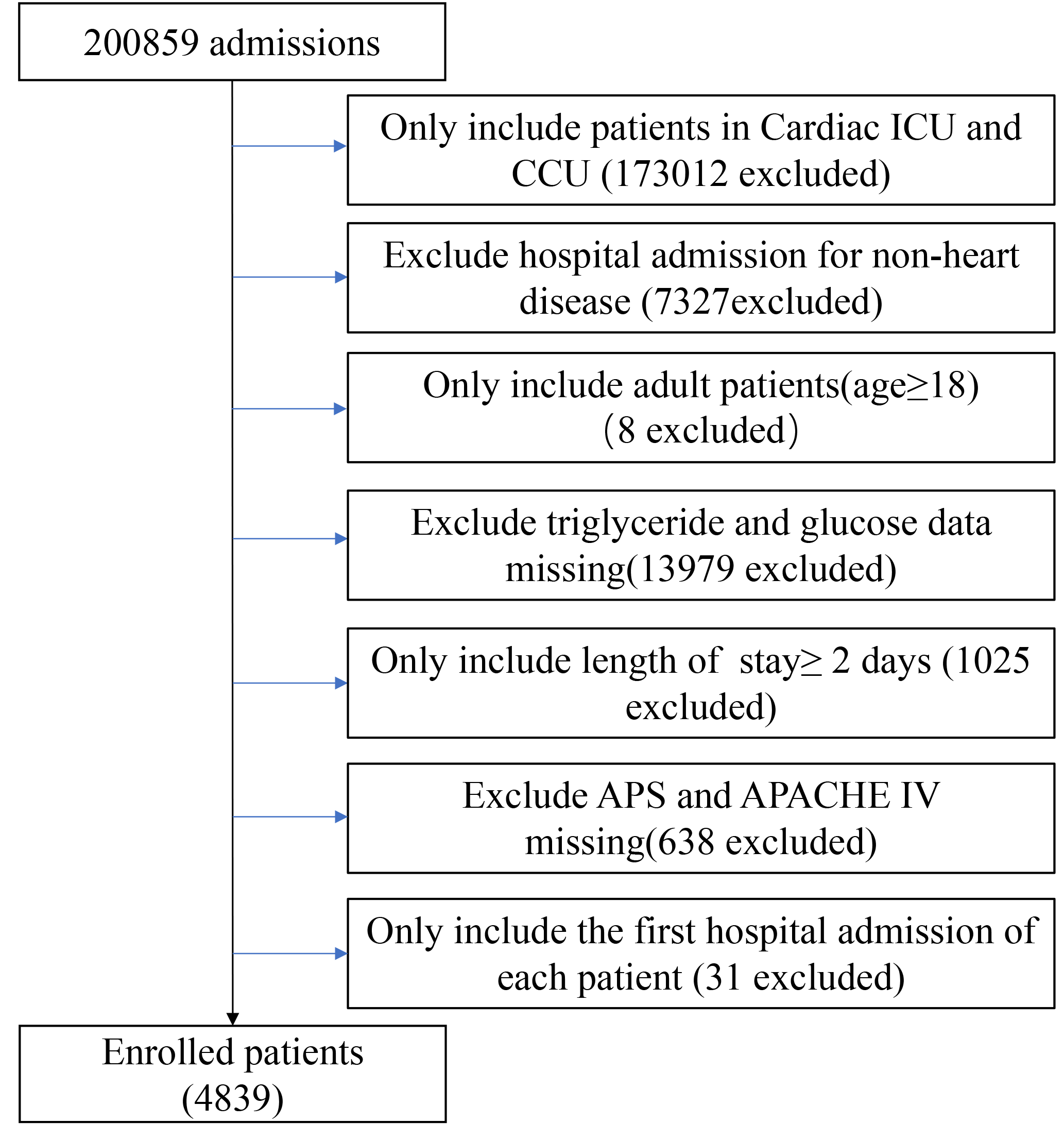 The original data for this study was from eICU Collaborative Research Database (https://doi.org/10.13026/C2WM1R) [20]. We passed the Protecting Human Research Participants exam to get access to the database (certificate number: 9728458).

Depending on the TyG quartiles, all enrolled patients were divided into four different categories. The primary outcome was in-hospital mortality. Secondary outcomes were length of intensive care unit (ICU) stay and length of hospital stay.

Binary logistic regression analysis was used to identify the independent relationship between TyG and in-hospital mortality and the results were expressed as odds ratio (OR) and 95% confidence interval (CI). P for trend was calculated. Covariates were selected by statistical analysis and clinical doubt to modulate the outcome. Local weighted regression (Lowess) was used to plot the curve in line with overall trend, which described the probability of mortality predictded by TyG in raw calculations without adjustment for other covariates. Receiver-operating characteristic (ROC) curve was applied to evaluate the sensitivity and specificity of TyG. DeLong test was applied to compare the area under the curve (AUC) of different parameters. Subgroup analysis was used to determine the correlation between TyG and in-hospital mortality in different subgroups, P for interaction was calculated. A two-tailed p value 0.05 was considered statistically significant. Stata V.15.1 (Statistical Analysis System, Raleigh, North Carolina, the United States) and MedCalc version 17 (MedCalc Software, Mariakerke, Belgium) were used to perform the data analysis.

Table 1.Characteristics of patients stratified by TyG quartiles.
3.2 Association between PLR and Outcomes

Local weighted regression was used to plot the curve in line with overall trend, which described the probability of mortality predictded by TyG in raw calculations without adjustment for other covariates.

Association between the triglyceride-glucose index and the length of ICU and hospital stay through box plot. Abbreviation: ICU, intensive care unit.

Previous studies have indicated that IR was strongly associated with the development and prognosis of CVD [22, 23, 24]. As an alternative method for evaluating, IR is a well-recognized risk factor for cardiovascular disease that induces an imbalance in glucose metabolism, leading to hyperglycemia, triggering inflammation and oxidative stress, systemic lipid disorders, which may contribute to the development of atherosclerosis [25]. In addition, studies have shown that IR can induce an increase in glycosylation products and free radicals, leading to inactivation of nitric oxide (NO), activation of the mitochondrial electron transport chain, and overproduction of reactive oxidative stress (ROS), which damage blood vessels endothelium [26, 27]. Moreover, IR can increase the expression of adhesion-inducing and thromboxane A2 (TxA2)-dependent tissue factor in platelets. These are associated with thrombosis and inflammation [28]. Furthermore, IR can induce excessive glycosylation, promote smooth muscle cell proliferation, collagen cross-linking, and collagen deposition, leading to increased left ventricular stiffness, cardiac fibrosis, and ultimately heart failure [29]. In addition, IR-induced activation of the renin-angiotensin system [30] and impaired cardiac calcium processing [31] may also contribute to the development of cardiovascular disease. As we know, the euglycemic-hyperinsulinemic clamp is the gold standard method for the diagnosis of IR [32]. However, due to the high cost and complex operation of this method, it is relatively difficult to carry out in practical clinical application. The homeostasis model assessment of insulin resistance (HOMA-IR) is a substitutive method for IR evaluation [33]. While it requires insulin concentration which is not routine clinical examination item. In this respect, TyG index which is calculated by fasting TGs and glucose is more readily available in clinical practice. And it has been proven to have a good predictive ability on IR compared with the above-mentioned two methods [34, 35]. Therefore, as a good substitute indicator for IR, TyG index may be a risk factor which associated with prognosis of CVD.

TyG has been extensively demonstrated to be significantly related to the development of a variety of diseases in former studies. A recent meta-analysis which included 13 cohort studies confirmed that TyG index was strongly related to the incidence of diabetes [36]. Furthermore, higher TyG index has been indicated to be associated with the increased risk of ischemic stroke [37]. Similarly, a large number of studies have also confirmed the relationship between TyG and CVD. A previous prospective cohort study proved that higher TyG index was related to the increased complexity of coronary lesions and the risk of worse outcomes in patients with NSTE-ACS [38]. Zhao et al. [16] enrolled 798 patients with T2DM and NSTEACS who underwent PCI and revealed that the level of TyG index was strongly associated with the incidence of adverse cardiovascular event during a 36-month follow-up. Luo et al. [38] reached the same conclusion in STEMI patients who were treated with PCI. Besides, TyG index was also proved to be an independent predictor of major cardiovascular events in patients with T2DM complicated by ACS undergoing PCI [39]. Even among patients with stable CAD, higher TyG index was still associated with the increased risk of mortality [40, 41]. Thus, paying attention to TyG in clinical practice and improving the level of nursing, monitoring may improve the prognosis and reduce mortality.

Interestingly, gender differences appeared to have an impact on the prediction of adverse outcomes of TyG. The previous study has shown that the ability of TyG to predict adverse cardiovascular events was better in women than men when TyG 9.53 [19]. The plausible explanation might be that female patients with diabetes had a higher incidence of CVD, especially in post-menopausal women [42]. Moreover, the role of hormones cannot be ignored. However, in the gender subgroup in our study, we failed to find the obvious interaction (p = 0.659). The reason might be that patients enrolled in this study have clearly been diagnosed with CVD and mortality of those was extremely high. Therefore, sex differences were attenuated.

Through the Lowess curve, we found that in-hospital mortality increased as the increase of TyG value. This was consistent with the conclusion that TyG was an independent predictor when considered as a continuous variable in multivariate logistic regression, which reconfirmed the reliability of TyG application in critically ill patients with heart disease.

In addition, higher TyG quartiles were associated with the increased length of ICU stay, which brought the psychological, physical, and financial burden on patients. Most of critically ill patients with heart disease have limited mobility so that complex clinical examination cannot be performed. In this circumstance, some of complex predictive scores can’t be calculated. Therefore, easily accessible indicators like TyG are more cost-effective and important for ICU patients.

This study is a single-center retrospective cohort study. Due to the limitations of the retrospective study, selection bias and recall bias cannot be avoided, and the causal relationship cannot be determined. Moreover, the severity for each kind of heart disease can not be stratified and the cause-of-death data was unavailable due to the limitation of our database. Furthermore, in patients with diabetes, the accuracy of the model is reduced because of the small sample size. And we are not able to demonstrate whether the appropriate treatment which aimed to reduce the TyG value related to the lower incidence of adverse clinical outcomes.

To summarize, the results indicated that TyG was an independent predictor of in-hospital mortality in critically ill patients with heart disease. And through multivariate logistic regression, the in-hospital mortality increased significantly as TyG quartiles increased. When considered as a continuous variable, TyG has been proven to significantly related to adverse events. In subgroup analysis, no significant interactions were observed in most subgroups. Furthermore, high TyG was associated with prolonged ICU stay length.

All methods were carried out in accordance with relevant guidelines and regulations.

The data used in this study was from eICU Collaborative Research Database [24], which is available at: https://doi.org/10.13026/C2WM1R. The author was approved to access to the database through Protecting Human Research Participants exam (certificate number: 9728458).

This study was exempted from institutional review Board approval for the following reasons: (1) retrospective design, which was lack of direct patient intervention; (2) Privacert certification of reidentification risk conforming to safe harbor standards for security protocols (Cambridge, MA) (HIPAA Certification no. 1031219-2). Data collection was in accordance with the ethical standards of the institutional review board of the Massachusetts Institute of Technology (no. 0403000206) and with the 1964 Declaration of Helsinki and its later amendments.

Thanks to Biyang Zhang for contributing to the first edition of this article.