Obesity is a risk factor for all-cause and cardiovascular mortality. Previous studies have confirmed that obesity increases the incidence of cardiovascular events [1, 2]. However, some long-term follow-up studies have suggested a negative correlation between body mass index (BMI) and prognosis of cardiovascular disease and target organ damage, known as the “obesity paradox” [3, 4]. The obesity paradox may be caused by the confounding of research results by a variety of factors, such as BMI. BMI, one of the most frequently used surrogate anthropometric measures for obesity, does not distinguish between muscle and fat, and poorly reflects body fat distribution [5, 6]. The value of BMI in assessing and diagnosing obesity has been questioned.

Central aortic pressure has been suggested to provide information regarding end-organ damage additional to that provided by conventional brachial artery pressure. Prospective studies have found that central blood pressure can predict vascular events better than peripheral blood pressure, and that it is closely related to cardiovascular and cerebrovascular endpoint events [7, 8]. On the other hand, changes related to damage of vascular structure and function are independent risk factors for the occurrence and development of cardiovascular events and may be better indicators or alternative endpoints for the prediction of cardiovascular risk [7, 9]. Pulse wave velocity (PWV) is currently recognized as the best indicator for noninvasive detection of arterial stiffness, which can effectively reflect functional changes. According to the latest European Society of Hypertension expert consensus on carotid-femoral PWV (cf-PWV) for clinical practice, the cut-off value of cf-PWV for predicting cardiovascular events has been found to be 10 m/s [10].

This study aims to explore the association between different obesity phenotypes and central aortic hemodynamics and vascular stiffness so as to explore a more reasonable way to evaluate the clinical significance of obesity in cardiovascular events and to guide the individualized treatment of obesity.

A total of 653 participants who received a routine physical examination at Ruijin Hospital from December 2017 to December 2019 were recruited. Nineteen cases were excluded due to missing data. Finally, 634 cases were included in this study. The inclusion criteria were age 18 years old, agreement to participate in this study and written informed consent. Exclusion criteria were: (1) Acute and serious heart disease (NewYork Heart Association Class IV). (2) History of cardiovascular or cerebrovascular disease within the previous 3 months. (3) Severe arrhythmias, such as atrial flutter, atrial fibrillation, and frequent ventricular tachycardia. (4) Active malignancies with a life expectancy of less than 5 years. (5) Any condition preventing acceptable technical quality of arterial stiffness monitoring. The protocol received Institutional ethics approval and all participants provided informed consent.

According to the Guidelines for Prevention and Control of Overweight and Obesity in Chinese Adults [11], the research subjects were divided into the following three groups: normal BMI group (BMI 24 kg/m), overweight group (24 kg/m BMI 28 kg/m), and obesity group (BMI 28 kg/m). Furthermore, according to the 2013 edition of Guidelines for Prevention and Treatment of Type 2 Diabetes in China [12], which defined central obesity (visceral obesity) as waist circumference (WC) 90 cm or waist-hip ratio (WHR) 0.90 in male, and WC 85 cm or WHR 0.85 in female, the subjects were divided into central obesity group and non-central obesity group.

Cf-PWV was measured by two trained study personnel using applanation tonometry with a Millar transducer and SphygmoCor CVMS system (AtCor Medical PtyLtd, Sydney, Australia). cf-PWV measurement was performed by sequential placement of the transducer on the femoral artery and carotid artery and determining transit time between the two pulses in reference to the R wave of the ECG. cf-PWV was calculated as the measured distance from the suprasternal notch to the femoral artery minus the distance from the suprasternal notch to the carotid artery divided by the pulse transit time [PWV = distance(m)/transit time(s)] by the integrated software, which automatically processed each set of pulse waves and ECG data.

According to the European Society of Hypertension expert consensus on cf-PWV for clinical practice, cf-PWV 10 m/s was defined as abnormal.

SPSS 26.0 software package (SPSS, Chicago, IL, USA) and Excel were used for statistical analysis. Continuous variables are expressed as mean SD, categorical variables are given as frequencies and percentages. One-way ANOVA is used for the comparison of quantitative data between the 3 groups of BMI class, and chi-square test for categorical variables. The correlation between different obesity phenotypes and central hemodynamic indices was analyzed by Pearson correlation analysis. Multivariable linear regression analysis was used to identify the factors influencing cf-PWV. Stepwise multivariate linear regression was conducted to investigate the association of the different obesity assessments with cf-PWV. Furthermore, predictive value of the four obesity indicators to cf-PWV was assessed using receiver operating characteristic (ROC) curve analysis. The difference between areas under the curves (AUC) was tested using the MedCalc software (MedCalc Software Ltd, Ostend, Belgium). A two-sided p value 0.05 was considered statistically significant.

A total of 634 participants was studied, including 393 males (62.0%). The mean age of the enrolled population was (52.03 12.93) years, and the mean BMI was (25.59 3.93) kg/m. There were statistically significant differences in age, gender, WC, HC, WHtR and WHR among the BMI classes (p 0.05). The three groups differed in prevalence of smoking, the overweight group had more antihypertensive therapy, and subjects were younger and more frequently male in the obesity group (p 0.05), but heart rate (HR) was similar (p = 0.299) among BMI groups.

Table 2.Correlation between different obesity phenotypes and central hemodynamic indexes in the total population.
4.3 Consistency between Obesity Diagnosed by BMI and Central Obesity Assessed by WC and WHR.

Participants were divided into three groups according to the BMI compared with groups with central obesity assessed by WC and WHR. We found that the results of the two groups were relatively consistent with the obese BMI class agreeing with higher WC and WHR in males reaching 98.2%, but less (94.6%, 91.9% respectively) in females (Tables 3,4). 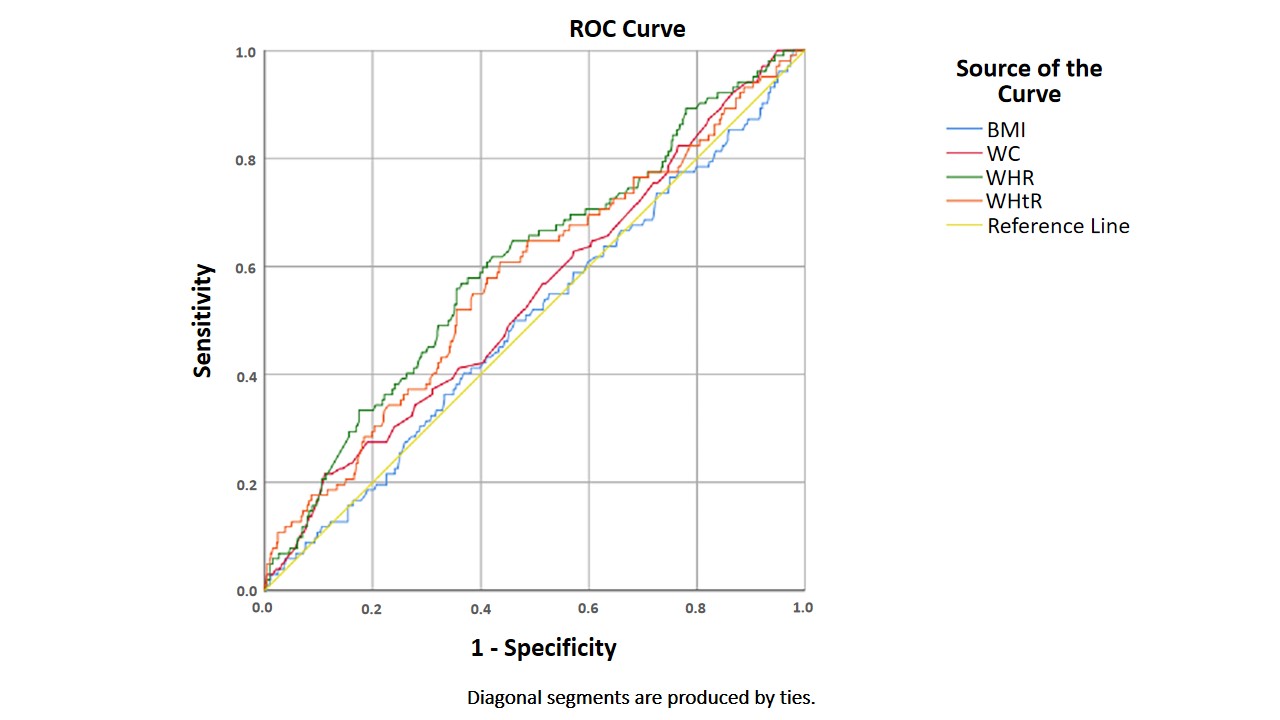 In this study, we found that brachial and central SBP and DBP and cf-PWV were higher with increasing BMI, as were PSP-CSP and PPP/CPP. The higher BMI groups showed lower CAP and cAIx. BMI had inconsistencies with fat distribution indicators in obesity diagnosis, especially in females, and was different from the other obesity-related metabolic phenotypes. After all risk factors were adjusted, only WC was found to be an independent risk factor for cf-PWV. The ROC curve showed that WHR may have greater predictive value for vascular stiffness than BMI, but there was no significant difference between WHR, WHtR and WC. Although all of the correlations between arterial stiffness measures and obesity variables are significant, they are weak, with r values 0.2 in Table 2. Fig. 1. is consistent with this finding, showing the largest C-index to be 0.60, which is not robust.

Although some studies have indicated that a higher BMI is frequently accompanied by hypertension, dyslipidemia and endothelial dysfunction [14, 15, 16], some individuals with increased BMI show a decreased risk of mortality [17, 18, 19], a phenomenon that has been called the “obesity paradox”. Our study also showed that in the general or male population, BMI was negatively correlated with CAP and cAIx, and positively correlated with PPP/CPP and CSP. That is, as BMI increases, the amplifying effect of pulse pressure makes male blood vessels appear younger, suggesting that obese people may have better arterial compliance than normal-weight people. In addition, BMI was not found to be an independent predictor for PWV after all risk factors were adjusted. These results were consistent with the obesity paradox to some extent.

These paradoxical results may be due, partly at least, to a limitation of BMI. It is well known that BMI was developed as a measure of weight rather than an index of obesity [20, 21], which may make it misleading in the estimation of body fat content. In our study, the difference between BMI and fat distribution indicators in diagnosing obesity was significant, which suggested BMI should not be used as a core index to evaluate central obesity.

Although BMI has been widely used to measure adiposity in many countries, including Asians, the American Heart Association (AHA) recommended in 2015 that the waist circumference should be used to assess the risk of cardiovascular diseases in Asians, partly because of the low sensitivity of BMI for cardiovascular risk [22]. In patients with coronary heart disease, there was no obesity paradox when body fat ratio (BF%) was used to replace BMI. BF% was associated with a higher risk of major adverse cardiovascular events (MACE), while fat-free mass was associated with a lower risk of MACE, suggesting that BMI was not associated with MACE [23].

A growing body of evidence suggests that fat distribution may be more important than overall adiposity. For instance, visceral fat is a strong and independent predictor of metabolic disorders, such as dyslipidemia, insulin resistance and type 2 diabetes [24, 25, 26]. Conversely, subcutaneous fat may have a beneficial effect on metabolism [27]. Increased visceral to subcutaneous fat area ratio (VSR) was an independent predictor of all-cause mortality, suggesting that the location of fat deposits may be more important than actual body fat mass [28]. In this study, using cf-PWV as a gold standard for vascular stiffness, we found that WC, WHtR and WHR were independent predictors of cf-PWV. In multivariate stepwise linear regression, WC was the strongest predictor for vascular stiffness. BMI, however, was not a predictor. Furthermore, when cf-PWV 10 m/s was used as the standard for vascular stiffness, the results showed that WHR had better predictive value than did BMI.

This study has some limitations: (i) As a cross-sectional study with a small sample size, the results need to be further confirmed in prospective studies. (ii) In this study, obesity types were grouped according to BMI, waist circumference, hip circumference and waist-to-hip ratio, without considering different fat distribution and body fat rate, or obesity types associated with metabolic abnormalities. Umbilical cord plane CT scan is currently recognized as the gold standard for visceral fat measurement, but visceral fat was not measured in this study. (iii) Our results show that all obesity measures are weakly associated with atherosclerosis. (iv) The large proportion of people receiving antihypertensive drugs and different antihypertensive drugs may cause possible confounding effects. (v) Blood pressure was taken as the average of three measurements; it is likely inflated by the first value due to initial stimulus or short resting period. It may be better to average the second and third measures. And the cuff sphygmomanometer is cylindrical rather than conical, which may be more appropriate for obese participants with large upper arms. (vi) The study was conducted in an Asian population, and it is not known whether the results will hold true for other ethnic groups.

The higher BMI groups showed lower CAP and cAIx. PSP-CSP and PPP/CPP were also highest in the obese group. BMI had poor consistency with fat distribution indicators in obesity diagnosis, especially in females. After adjusting for all cardiovascular risk factors, only WC was found to be an independent risk factor for cf-PWV. WHR may have greater predictive value for vascular stiffness than other indices of obesity.

All studies were in compliance with the Declaration of Helsinki, the Good Clinical Practice guidelines, and applicable regulatory requirements. All participants provided written informed consent to participate for the respective study, which was approved by the Human Research Ethics Committee at Ruijin Hospital, Shanghai Jiao Tong University School of Medicine (Number: 2017(1)-1).

We gratefully acknowledge the invaluable assistance of the physicians of the Department of Geriatrics, Ruijin Hospital, Shanghai Jiaotong University School of Medicine; the study would not have been possible without their support.