In the past few decades, cardiovascular disease has remained a leading cause of death worldwide, despite a great improvement in prognosis [1, 2]. In this case, a coronary care unit (CCU) was established to focus on managing patients with cardiovascular diseases who may require meticulous care and targeted treatment to reduce adverse outcomes [3, 4, 5]. Clinicians never ceased to explore prognostic indicators that are cheap and available for patients in CCU.

Inflammatory factors are closely associated with the occurrence and development of many cardiovascular diseases [6]. For example, as a major player in acute inflammatory responses, a higher neutrophil percentage was associated with increased mortality risk among patients with acute coronary syndrome [7]. Similarly, Gupta et al. [8] confirmed that serum albumin levels play an independent prognostic role in patients with acute and chronic diseases. The neutrophil percentage to albumin ratio (NPAR), a combination of two classical clinical evaluation parameters, was calculated by dividing the neutrophil percentage by the serum albumin concentration and has now become a novel prognostic marker. Previous studies have shown that NPAR is closely associated with the prognosis of severe sepsis and acute kidney injury (AKI) [9, 10]. Moreover, increased NPAR is associated with higher in-hospital mortality and reinfarction rates in patients with ST-elevation myocardial infarction (STEMI) [11]. However, no study has shown a correlation between NPAR and worse outcomes in patients in CCU. From this perspective, this study was based on the hypothesis that NPAR can be considered an independent predictor of adverse events in patients admitted to the CCU.

We extracted all data from an openly available critical care database named Medical Information Mart for Intensive Care III (MIMIC-III, version 1.4) [12], which included data of over 60000 intensive care unit (ICU) stays and over 50000 stays for adult patients. The data in MIMIC-III were collected from June 2001 to October 2012 at the Beth Israel Deaconess Medical Center, including general information (patient demographics, birth and death, and ICU admission and discharge information), vital signs, laboratory data, balance of body fluids, reports, medication, and nursing records. The Protecting Human Research Participants examination was passed to gain access to the MIMIC-III database, and our certificate number is 36571208.

All adult patients (18 years old) admitted to the CCU were included, and only the first admission of each patient was included. Patients who met the following criteria were excluded: (1) age 18 years; (2) length of CCU stay 2 days; (3) missing neutrophil percentage and albumin data; and (4) missing individual data 5%. Finally, 2364 patients were included in this study (Fig. 1). 2.3 Definition of NPAR and Outcomes

NPAR was calculated as the neutrophil percentage divided by the serum albumin concentration. Neutrophil percentage and serum albumin concentration were obtained from the first blood test report after admission to the CCU and measured simultaneously within 24 h. The primary outcome was in-hospital mortality, and the secondary outcomes were 30-day mortality, 365-day mortality, length of CCU stay, length of hospital stay, AKI, and continuous renal replacement therapy (CRRT).

Binary logistic regression analysis was used to analyze the relationship between the NPAR levels and clinical outcomes. Cox regression analysis was performed to analyze the association between NPAR and 365-day mortality. Covariates were included in the regression model based on statistical evidence and clinical judgment. The curves that conformed to the general trend were plotted through local weighted regression (Lowess). Subgroup analysis was used to assess the impact of NPAR on in-hospital mortality in different subgroups. Receiver operating characteristic (ROC) curves were drawn, and areas under the curves (AUC) of different parameters were compared using the DeLong test. The log-rank test was used to compare the 30-day and 365-day survival rates of the different groups, and Kaplan–Meier curves were plotted. 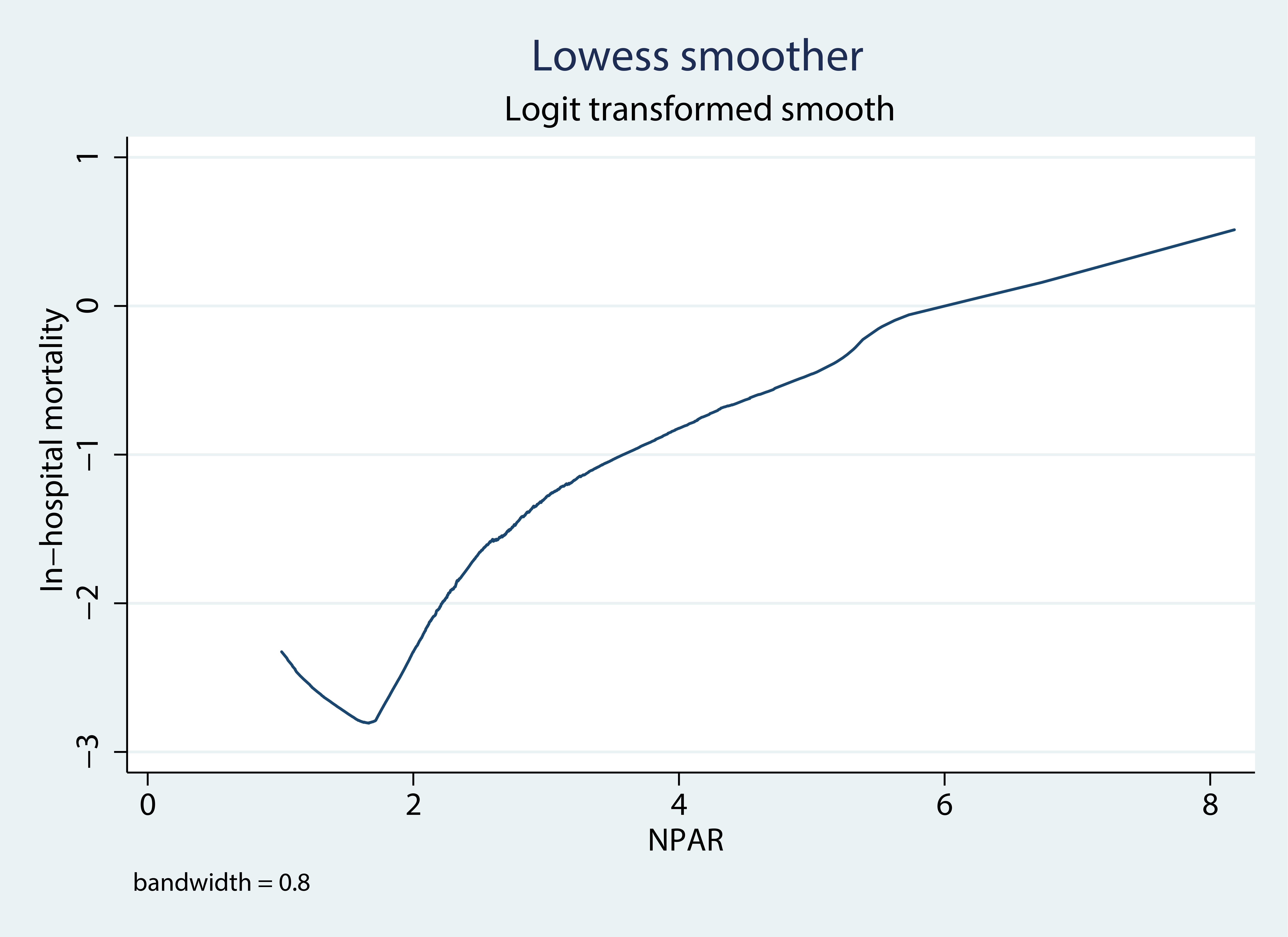 In the subgroup analysis, no significant interactions were observed in most subgroups. Hypertension, prior myocardial infarction, low glucose, and low blood nitrogen urea enhanced the effect of NPAR on in-hospital mortality. In contrast, cardiogenic shock, respiratory failure, sepsis, vasopressin treatment, and low albumin and sodium levels attenuated the effect of NPAR on in-hospital mortality (Table 5). The ROC curves in Fig. 3 demonstrate that NPAR had a moderate ability to predict in-hospital mortality, with an AUC of 0.653 (p 0.001). Comparing AUCs, the ability of NPAR to predict in-hospital mortality was better than that of platelet to lymphocyte ratio (PLR) (p 0.001) and neutrophil count (p 0.001) but lower than that of SOFA (p = 0.046) and SAPS II (p 0.001). No statistical difference was observed between the neutrophil-to-lymphocyte ratio (NLR) (p = 0.683) and albumin level (p = 0.874). In addition, ROC curves were drawn for NPAR, SOFA, and NPAR+SOFA. We found that when combining NPAR with SOFA, the AUC of 0.722 was obtained, which was larger than the AUC of the two separately, suggesting that the combination of both indices improved the predictive accuracy of adverse outcomes in patients in CCU (Fig. 4). Kaplan–Meier curves showing the association of NPAR with 30-day (A) and 365-day (B) all-cause mortality. Abbreviation: NPAR, neutrophil percentage to albumin ratio.

The major conclusions drawn can be summarized as follows: (1) As NPAR quartiles increased, in-hospital all-cause mortality increased significantly; even after adjusting for confounding variables, the association between NPAR and in-hospital all-cause mortality remained strong. (2) The results of the ROC curves showed that NPAR had a moderate ability to predict in-hospital mortality in CCU patients. Notably, we found that NPAR was better than PLR and neutrophil count in predicting in-hospital mortality but lower than SOFA and SAPS II. (3) As NPAR quartiles increased, the 30-day and 365-day cumulative survival rates decreased significantly. (4) The Lowess curves presented the non-linear relationship between NPAR and in-hospital mortality. (5) Higher NPAR quartiles were associated with increased AKI and CRRT. After adjusting for possible confounding variables, NPAR was found to be independently associated with AKI. (6) The length of CCU and hospital stay were prolonged as NPAR increased.

Inflammation has been proven to be closely associated with the occurrence, development, and prognosis of coronary atherosclerosis and many other heart diseases. Neutrophils are the most abundant white blood cells in circulation. As effector cells of the natural immune system, neutrophils participate in various immune and inflammatory processes and play an important role in coordinating overall immune and inflammatory responses [15]. Albumin, a classical nutritional marker, is an important transport protein that affects the transport of anti- and pro-inflammatory factors and has antioxidant and anti-inflammatory properties [16]. Several clinical studies have shown that low albumin level is an independent predictor of prognosis in patients with acute coronary syndromes [17, 18]. A low serum albumin concentration is also strongly associated with the development of ischemic heart disease and acute myocardial infarction [19, 20, 21].

As a combination of two classical clinical evaluation parameters, NPAR is an independent predictor of clinical outcomes in many diseases such as septic toxemia, AKI, septic shock, and STEMI [9, 10, 11]. A previous study showed that NPAR, at emergency admission, is an important prognostic indicator of 28-day mortality in patients with severe sepsis [22]. Recent studies in the field of cardiology have shown that NPAR at admission is independently associated with in-hospital mortality in patients with STEMI [23]. For patients with cardiac shock, NPAR is closely associated with in-hospital mortality, 30-day mortality, and 365-day mortality [24]. A study of 3106 patients with extremely severe coronary atherosclerotic heart disease indicated that the risk of all-cause death significantly increased as NPAR increased. After adjusting for confounding variables, NPAR was independently associated with adverse outcomes [25]. Although neutrophil percentage and albumin level have been shown to affect the prognosis of patients with coronary atherosclerosis, NPAR can magnify this change. Clinicians can evaluate the condition more accurately according to NPAR.

Previous studies have confirmed that the inflammation markers, NLR and PLR, have been proven to have a nonlinear relationship with adverse outcomes [26, 27, 28]. The Lowess curve was drawn in our study and the curve revealed J-shaped curves for the relationship between the NPAR and in-hospital mortality, which was consistent with the results of NLR and PLR in previous studies. An inflection point was observed at approximately NPAR = 1.65. From the Lowess curve, we found that NPAR 1.65 was associated with a higher risk of the primary adverse outcome. Notably, when NPAR was 1.65, the mortality rate decreased with an increase in NPAR, suggesting that we should be flexible when using NPAR to judge the disease condition of patients in CCU. When the NPAR value is very small, we should consider whether patients have other comorbidities contributing to increased mortality risk. For example, patients with agranulocytosis have an extremely low NPAR, which has been shown to affect the prognosis of leukemia patients receiving chemotherapy [29]. In this study, we did not exclude patients with hematologic malignancies from hematologic diseases, resulting in lower NPAR values in these patients.

In this study, we compared the influence of NPAR with other clinically common markers such as PLR, NLR, SOFA, and SAPS II. As clinical indicators, PLR and NLR have already been associated with the prognosis of cardiovascular disease [30, 31]. Interestingly, we found that the NPAR was more sensitive in predicting in-hospital mortality in patients in CCU than PLR and NLR. Through the Delong test, SOFA and SAPS II have been demonstrated to be better predictors of adverse outcomes than NPAR. However, NPAR is more cost-effective, can be obtained only through routine admissions, and has a good predictive ability. Especially in cases where a more complex score cannot be calculated, NPAR can replace SOFA and SAPS II as available clinical prognostic factors for critically ill patients.

This was a single-center retrospective cohort study. Due to the limitations of this retrospective study, selection and recall biases could not be avoided, and the causal relationship could not be determined. The failure to dynamically observe the changes in NPAR during hospitalization was also one of the limitations of this study. Although we have done our best to control the bias using multivariate regression, some factors that may affect the model could not be included due to the restriction of the database, such as the left ventricular ejection fraction. Therefore, a multicenter prospective study is required to confirm these findings.

The NPAR was an independent risk factor for in-hospital mortality in patients in CCU and had a moderate ability to predict in-hospital mortality. As the NPAR quartiles increased, the 30-day and 365-day cumulative survival rates decreased significantly. Also, NPAR was independently associated with AKI, and the length of CCU and hospital stay were prolonged as NPAR increased.

The data was from MIMIC-III database (https://physionet.org/content/mimiciii/1.4/). Our certificate number is 36571208.

The establishment of the MIMIC-III database was approved by the Institutional Review Boards (IRB) of the Massachusetts Institute of Technology (MIT, Cambridge, MA, USA) and Beth Israel Deaconess Medical Center. The informed consent was waived due to the retrospective design and lack of direct patient intervention. Our research obtained anonymous information from this database.

The present study was funded by grants from the National Key R&D Program of China (2018YFC2001900-02) and Beijing Municipal Administration of Hospitals Clinical Medicine Development of Special Funding Support (grant no. ZYLX201810).