Prosthetic valve endocarditis (PVE) is a very serious disease with 30% in-hospital mortality that increases in case of abscess involving the aortic annulus, left ventricular outflow tract, fibrous trigone and mitral annulus. PVE is a life-threating complication of valve replacement accounting for 20–30% of all cases of infective endocarditis (IE) [1,2]. Its frequency is increasing, ranging from 0.1–2.3 per patient-year [3], especially in cases of late PVE due to the use of broad-spectrum antibiotics in the immediate postoperative period, advanced age of the patients, and major comorbidities.

Despite improvements in medical therapy, PVE is associated with a significant increase in morbidity and mortality [4-6]. Neurological complications are the main cause of higher mortality rates [7,8]. However, paraannular complications such as abscess, pseudoaneurysms and fistula that develop at an advanced disease stage portend a poor prognosis [7] and represent a surgical challenge associated with high perioperative mortality and instability of the implanted prosthesis.

Surgical therapy has the advantage of eliminating all infected tissue, regardless of the anatomical structures involved, replacing the aortic valve and, sometimes, also the aortic root [9].

The aim of this study is to describe an alternative technique for aortic prosthesis implantation in the sinuses of Valsalva without using a patch for aortic annular reconstruction in patients with PVE complicated by paraannular abscess.

From January 2008 to March 2021, 47 consecutive patients underwent aortic valve replacements for isolated aortic PVE unresponsive to antibiotic therapy at Anthea Hospital GVM Care&Research, Bari, Italy. The diagnosis of IE was based on the results of echocardiography and blood cultures [10-12] and made according to the Duke criteria [13]. All patients with positive intraoperative findings of paraannular abscess involving the aortoventricular junction larger than one aortic cusp without dehiscence, fistula to other cardiac chamber or aortic pseudoaneurysm formation were included in the study, and their clinical and laboratory data were collected. If dehiscence, fistula or pseudoaneurysm was present, patients were excluded and treated with radical debridement of the infected and necrotic tissue around the aortic root, followed by extensive surgical reconstruction with patches and using an aortic homograft, mechanical or biological prosthesis.

Active endocarditis is defined as any patients currently receiving antibiotics at the time of surgery. An abscess was defined as a region of necrosis containing purulent material that had no communication with the cardiovascular lumen. Patient characteristics are reported in Table 1. Mean age was 70.96 5.26 years (range, 46–80), 25 patients (53.2%) were men and 22 (46.8%) women.

The GVM Care&Research review board approved the study and need for patient consent was waived due to the retrospective nature of the study.

Indication for surgical intervention followed current recommendations [13]. The decision was based on patients’ hemodynamic instability, septic shock, or anatomical risk (e.g., detachment of the valve prosthesis with annular abscess and severe perivalvular leakage), and after specialist consultation including a cardiac surgeon, a cardiologist, an anesthesiologist, a neurologist and an infectious disease specialist. Surgical timing is classified into “emergent” and “urgent”. Emergent surgery refers to an operation that begins within 24 hours after the diagnosis of IE or heart failure is made while urgent surgery when patients are not electively admitted for surgery but they require surgery during hospitalization.

All patients underwent intraoperative transesophageal echocardiography (TEE), during in-hospital stay and at follow-up.

Preoperative TEE was routinely used. All interventions were performed under general anesthesia with re-sternotomy. Femoral vein and arteria cannulation for extracorporeal circulation was performed prior to re-sternotomy. All operations were performed with cardiopulmonary bypass and moderate hypothermia. Cold (4 C) intermittent antegrade blood cardioplegia was used for myocardial protection. The valve and surrounding infected tissue were carefully inspected (Fig. 1A,B). The prosthetic valve was entirely removed and sent to the laboratory for culture examination (Fig. 1C). 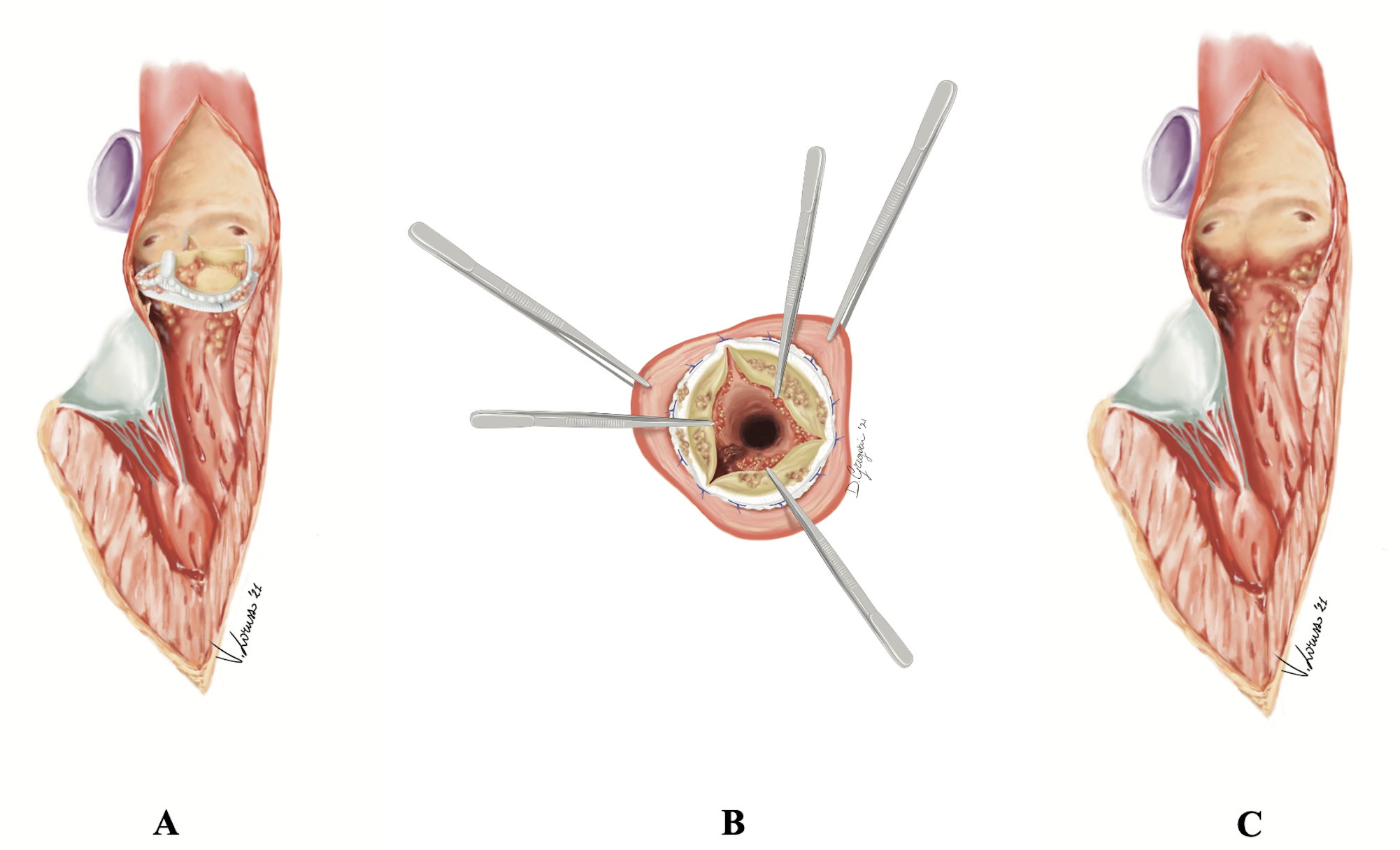 All infected tissue was excised. The abscess was emptied, washed with disinfectant solution, and left open to drain. Subsequently, the new aortic prosthetic valve was implanted into the aortic root, exactly at the level of the sinuses of Valsalva and above the abscess. The first step consists in the passage of U-shaped stitches (Ti-Cron 2/0, Covidien, India) with pledgets through the aortic wall approximately 5–7 mm above the abscess involving the annulus (Fig. 2A) in an intact supraannular area. In the second step, the prosthesis is fixed to the aortic wall (Fig. 2B). In the third step, a 10 mm wide circumferential Teflon strip (Bard Peripheral vascular, Inc., Tempe, AZ, USA) is positioned along the external course of the aortic wall and U-shaped stitches are passed from the outside to the inside to definitively fix the prosthetic annulus to the sinuses of Valsalva (Fig. 2C–F). 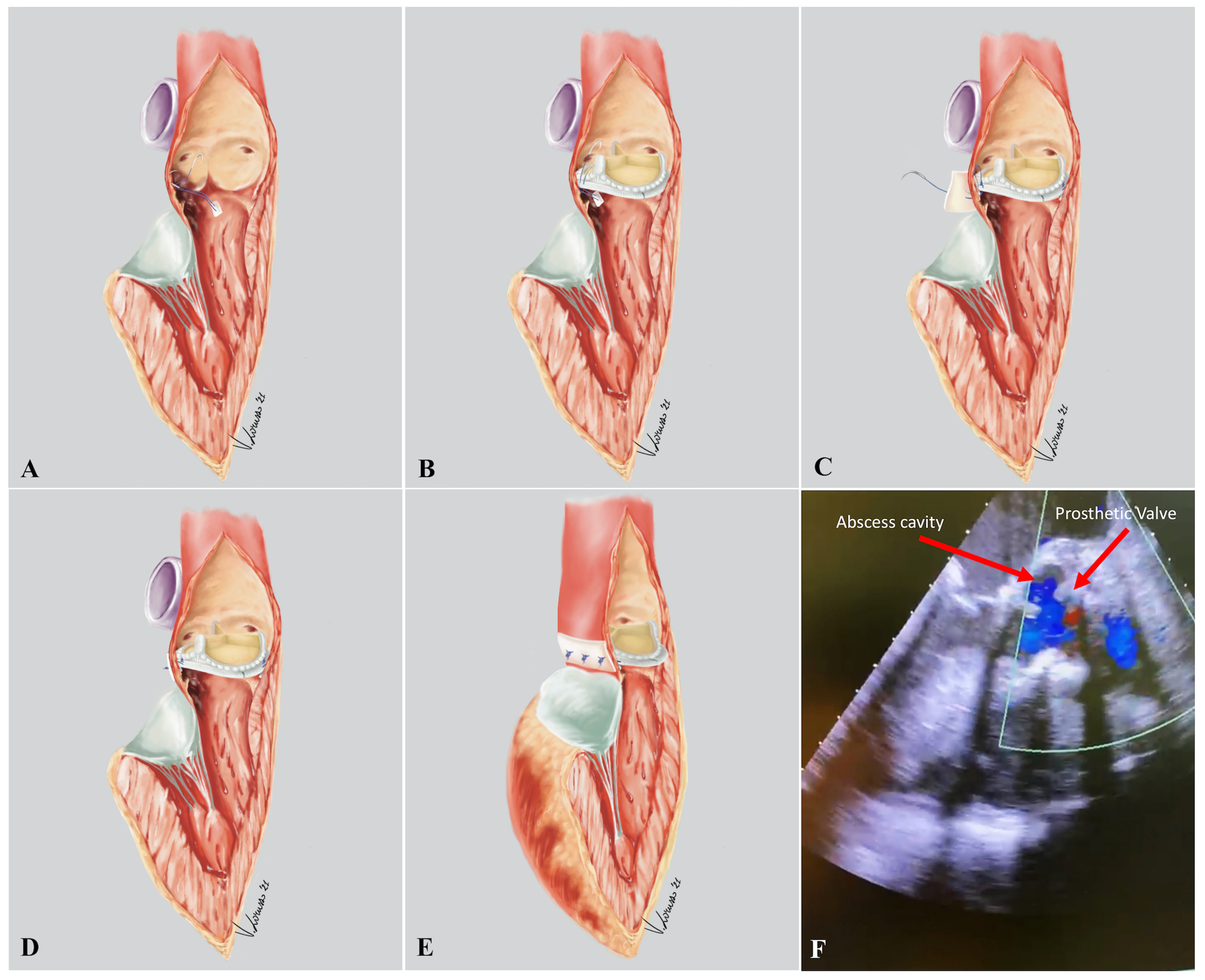 The choice of bioprosthesis or mechanical prosthesis was on the surgeon’s judgment in compliance with current guidelines. Special attention was paid to the patency of the coronary ostia near the new prosthesis.

In-hospital mortality was 8.5% (4/47 patients). In no cases the cause of death was a new aortic prosthesis detachment: two patients died of cardiogenic shock, one for septic shock, and one for gastrointestinal complication. All patients were classifiable as early PVE (1 year between first surgery and re-operation).

Sixteen patients (34%) of the 47 patients had at least one cardiovascular or renal complication (stroke in 3, permanent pacemaker in 2, atrial fibrillation in 4, 1.5-fold increase in creatinine compared to preoperative values in 3, and need for temporary dialysis in 4).

Four patients died (9.3%, 4/43 patients), 2 due to cardiac causes and 2 due to non-cardiac causes (one cancer, one traumatic accident). Predicted probability of cardiac vs non-cardiac mortality was not statistically significant (p = 0.88). At follow-up, no patient presented with moderate or severe (grade 2 to 3) prosthesis/aortic regurgitation; mild to trivial aortic regurgitation occurred in 9 patients (21%). Mean transprosthetic aortic gradient was 14.7 9.3 mmHg; one patient (2.3%) underwent transcatheter aortic valve implantation for structural prosthetic valve deterioration (stenosis) after 7 years of previous surgery. Among survivors, 40 and 3 were in New York Heart Association class II and III, respectively; transient or permanent ischemic accidents were observed in 4 patients (9.3%). No patients had endocarditis. Other relevant outcomes at follow-up are reported in Table 4.

PVE is a serious complication after aortic valve replacement. The early mortality reported in different studies has varied between 3.9% and 40% in surgically treated patients [14-18] and was higher in patients treated with medical therapy. In our study, the overall 30-day mortality was 8.5% (4/47 patients). In clinical presentation, uncontrolled aortic root abscess can manifest as a burrowing abscess, a cardiac fistula or a rupture into a cardiac chamber, a pseudoaneurysm, or an arrhythmia leading to hemodynamic instability. An early and extensive surgical reconstruction can be essential, because antibiotic therapy alone is usually inadequate to arrest the destructive effect of the abscess. There is no unanimous consensus on which prosthesis is optimal for implantation in patients with PVE. Aortic homografts but also mechanical or biological prostheses are a valid option in patients with extensive root destruction [14-16]. Regardless of the type of prosthesis used, radical debridement of the infected tissue and necrotic tissue around the aortic root, reconstruction of the aortic root by patching or plicating the resected area seems to be the best solution.

When the infection is limited to the prosthetic valve, numerous studies reported the implantation of the new prosthetic valve using standard techniques. If the infection involves the annulus and surrounding tissue, all infected material, foreign bodies, and necrotic tissues should be removed to minimize the residual infectious burden and provide optimal access for host defense and antimicrobial therapy. When a localized abscess is not larger than a single aortic cusp, non-pledgeted sutures are placed around the intact annulus and pledgeted sutures are used to obliterate the abscess using a sandwich technique before placement of the stiches across the sewing ring of the prosthetic aortic valve of choice during aortic valve replacement. In the presence of abscess cavities or tissue defects larger than one aortic cusp without aorto-ventricular dehiscence, the defect on the aortic annulus should be reconstructed using autologous pericardium, bovine pericardium, and other materials, and pledgeted sutures placed on this patch during aortic valve replacement. Repair patches must be generous to minimize tension on the suture lines and the valve prosthesis anchored to the ventricular muscle or to the reconstruction patch in a way that prevents leakage and pseudoaneurysm development beneath the prosthesis. In the literature, the risk of death, reinfection and reoperation is higher in the first year after surgery. Grubitzsch et al. [19] reported a cumulative incidence of death, reinfection and reoperation of 19% at 30 days and 36.2% at 1 year.

In our study we described an alternative technique for aortic prosthesis implantation in the sinuses of Valsalva without using a patch for aortic annular reconstruction in patients with aortic PVE complicated by an abscess larger than one aortic cusp without aorto-ventricular dehiscence, fistula or aortic pseudoaneurysm. In our department, we have been using this technique as standard treatment for the past 13 years.

The surgical technique consisted of initial cleaning of the aortic annulus and aortomitral curtain. The abscess was left open to drain and the new aortic prosthesis was implanted into the aortic root, exactly at the level of the sinuses of Valsalva and above the abscess involving the aortic annulus. After passing U-shaped stitches with pledgets through the aortic wall, approximately 5–7 mm above the abscess, the prosthesis is fixed to the aortic wall. In the last step, a 10 mm wide Teflon strip is positioned along the external course of the aortic wall and U-shaped stitches are passed from the outside to the inside to definitively fix the prosthetic annulus to the sinuses of Valsalva.

Although the debate remains unresolved on whether to keep open or close the drained abscess with a patch, we believe this alternative technique is useful because the abscess is left open and this allows a continuous drainage of the cavity and an easier achievement by antibiotics. Using standard technique, abscess closure with patches, despite drainage and disinfection, can cause a new abscess as antibiotics alone fail to reach the site of the abscess and eradicate the infection. In addition, it can also lead to detachment of the patch causing devastating damage to the surrounding tissues of the heart and also a detachment of the prosthesis. Furthermore, nowadays new device models have also become available that can reduce the need for an intact annulus (e.g., stentless bioprostheses) [20,21] or avoid the need for sutures (e.g., sutureless aortic valve prostheses) [22].

The absence of patches and other foreign material for annular reconstruction can shorten ischemic times and reduce the risk of reinfection, which is of great advantage for high-risk patients such as those with PVE. Radicality is key but a fast procedure is very important because prolonged cross-clamp time is correlated with postoperative mortality [23]. However, it should be underlined that we did not include a control group in whom the patch annular reconstruction was used, making the comparison between the two techniques unfeasible. However, this goes beyond the scope of our manuscript, which aimed at describing a modified surgical technique for aortic prosthesis implantation.

The GVM Care & Research review board approved the study (internal protocol; decision 08 August 2020) and need for patient consent was waived due to the retrospective nature of the study.

The authors gratefully recognize the help of Rosanna Pucciarelli for pictures.

The authors declare no conflict of interest. Giuseppe Nasso is serving as one of the Guest editors of this journal. We declare that Giuseppe Nasso had no involvement in the peer review of this article and has no access to information regarding its peer review. Full responsibility for the editorial process for this article was delegated to Carmela Rita Balistreri.