CT angiography (CTA) has a unique advantage in displaying the abnormal course and spatial orientation of the peripheral blood vessels of the heart and arterial system, it can show that the beginning of the pulmonary artery branch on the affected side is the blind end [4, 5, 6, 7]. But it has some limitations in the direction of blood flow, and radiation, which is difficult to tolerate in children and the development of screening is limited [8]. Conventional pulmonary angiography is the “gold standard” for imaging diagnosis of this disease, which can reflect the absence of pulmonary artery length and collateral vessels. However, the disadvantages of angiography are invasive, expensive and time-consuming with certain risks.

As an invasive, convienent and low cost medical imaging method, echocardiography has been the first-line image examination for cardiovascular disease. Beside intracardiac malformation, echocardiography also could estimate the pressure of cavities and great artery, such as pulmonary pressure. Echocardiography can be regarded as the main method to detect UAPA, but it still needs to rely on the operator’s technology and experience as well as the understanding of the disease, there is still a high rate of missed diagnosis.

At present, only some UAPA cases diagnosed by echocardiography have been reported [9, 10]. These reports comfirmed the diagnostic value of echoardiography in UAPA, and analyzed the complications caused by UAPA [11, 12], and used for follow up assessment after surgery [13]. However, the clinical understanding of this disease is limited, and few references are focusing on the echocardiographic characteristics, changes of pulmonary artery pressure and prognosis.

To sum up, cilinical and echocardiographic data of 49 UAPA were analyzed in this study. the aims are: (1) to summarize the echoic feature, and to evaluate the usefulness and limitation of echocardiography in UAPA diagnosis. (2) to explore the dynamic change of pulmonary artery in UAPA patients.

From January 2014 to June 2020, 56 consective patients who were clinical diagnosed as UAPA were collected in this study. Seven patients with incomplete imaging data collection or lost in follow-up were exclude. Finally 49 patients with UAPA diagnosed in our hospital are collected as the research objects. There are 24 cases of infants or children below 3 years old, 13 cases of children (6, 12), 5 cases of adolescents (12, 18), 3 cases of adults (18). 12 patients are confirmed by surgery, who were accompanied with other intracardiac malformation, 29 cases were diagnosed by CTA, and 8 cases were diagnosed with pulmonary wedge angiography. All 49 subjects underwent transthoracic echocardiography and consent was obtained from each subject.

The equipment are Philips EPIQ 7C (Philips Medical Systems, Amsterdam, The Netherlands) and Ge E9 color Doppler ultrasound (Logiq E9, GE Medical Systems, Wauwatosa, WI, USA). The probe frequency is 3.5–7.5 MHz. The patient was lying on the left side and connected with ECG. Routine scanning was performed on the parasternal long axis view of left ventricle, the short axis view of great vessels, the parasternal 2, 3, 4-chamber view, the short axis view of left ventricle, the view of aortic arch of suprasternal fossa, infraxiphoid biatrial view, the long axis and short axis section of the aortic arch of the suprasternal fossa were observed. Focusing on the bifurcation and left and right branches of pulmonary artery; The confluence and origin of the left and right pulmonary arteries were scanned by sector scan and rotation. The blood flow signals in the pulmonary artery were displayed by color Doppler ultrasound.

The statistical software is SPSS 21.0 (International Business Machines Corporation, IBM, Armonk, NY, USA), and the sample data are expressed by mean and standard deviation. Categories are expressed as percentages. Independent sample t test and test are used between groups. Analysis of variance was used to compare the differences among the three groups. Probability (P) values 0.05 were considered significant.

Our center is affiliated to the the First Affiliated Hospital of the Fourth Military Medical University. The coincidence rate of the first time ultrasonic diagnosis is 55%, and that in consultation with senior doctors before operation is 83%. Especially in tetralogy of Fallot patients with absent pulmonary artery, the misdiagnosis rate was as high as 77% (7/9), This shows that it is still difficult for UAPA.

Table 1.Types and incidence of cardiovascular malformations in patients with UAPA.

According to the statistics of associated malformations and changes of pulmonary artery in patients with UAPA, it can be seen that the changes of ASD/PFO, Patent ductus arteriosus (PDA) and Ventricular septal defect (VSD) are mainly pulmonary hypertension as shown in Table 2.

The secondary dynamic changes of UAPA patients are shown in Table 3. These patients have normal ejection fraction. The main manifestation of pulmonary hypertension group is the increase of right ventricular volume load, and the main manifestation of pulmonary artery stenosis group is the increase of collateral circulation (P 0.05).

Table 3.Comparison of echocardiographic parameters in three groups of patients with UAPA. 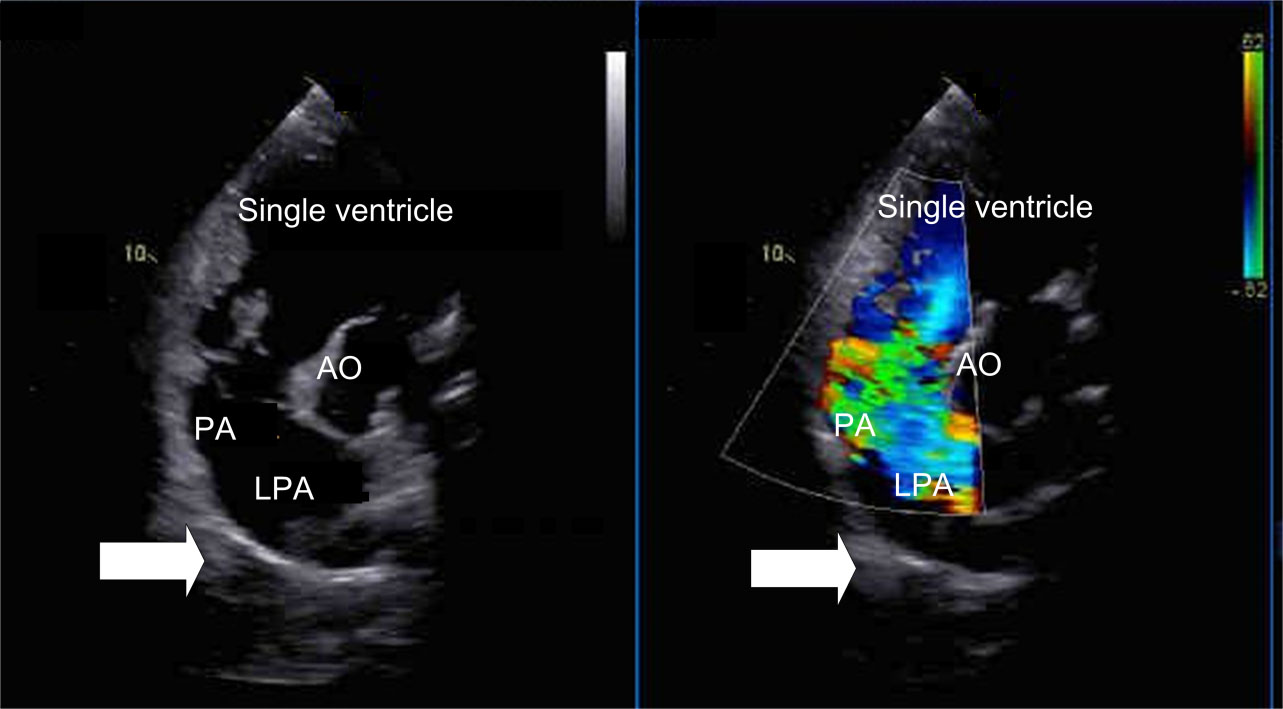 UAPA is a congenital pulmonary vascular malformation, characterized by the absence of one side pulmonary artery. The supporting arteries are mainly from the bronchial arteries branches, the descending aorta or innominate artery. These arteries are relatively small, forming aorta pulmonary collateral circulation. Although echocardiography were most frequently used examination method for congenital heart disease, echocardiographic data about UAPA were rare. Most were case reports or small sample reports.A typical case of UAPA was analyzed by Sigusch [16]. Chopra [17] analyzed a 77-year-old woman with UAPA. Some pediatric UAPA cases were analyzed and sorted out by Weldetsadik [18]. Raymond [19] analyzed neonatal UAPA cases and summarized diagnostic points and methods and mainly described the basic feature of echo findings. Yang [20] has proposed a new treatment plan. Kawada [21] has recorded the successful diagnosis and treatment of UAPA patients. Wang [22] has analyzed the clinical features of UAPA and confirmed the diagnostic significance of ultrasound. Cao [10] has analyzed the clinical features of UAPA and confirmed the diagnostic significance of ultrasound. But it only evaluates that echocardiography is an effective method for diagnosing UAPA, which can evaluate the anastomotic blood flow velocity and pulmonary artery pressure changes after pulmonary artery reconstruction. In the past, the literature only reported cases of misdiagnosis reasons or accompanied by intracardiac malformations. These reports confirmed the diagnosis value of echocardiography in UAPA, however, further analysis of dynamic change, and change of capacity load, or pressure change of pulmonary remained elusive. Our discovery is different from the previous literature. It is the first time to observe the different conditions of the pulmonary artery and divide the patients into three groups (Stenosis, hypertensione, neither stenosis nor hypertension). Most common in patients with pulmonary hypertension. We followed up some cases and found that patients with pulmonary hypertension have a poor prognosis. This may be due to the formation of collateral arteries as they grow, and the pulmonary artery pressure gradually increases. Eventually, pulmonary hypertension can cause heart failure.

UAPA is more usual on the left side, and ejection fraction is normal in most patients. It is often associated with ASD/PFO, PDA and VSD, and is prone to secondary pulmonary hypertension, which is characterized by increased right ventricular volume load, which is closely related to the prognosis. Therefore, it is necessary to pay attention to the evaluation and treatment of pulmonary arterial pressure.

The study was approved by the Medical Ethics Committee of Xijing hospital (Ethics approval number: KY20162034-1), where exempted informed consent from enrolled patients because of retrospective study protocol.