Atherosclerotic cardiovascular disease (ASCVD) is still the leading cause of death worldwide [1]. Low-density lipoprotein cholesterol (LDL-C) is not only the main component of atherosclerotic plaque formation but also a crucial risk factor for ASCVD. The management of cardiovascular events in very-high-risk patients with ASCVD has always attracted much attention [2, 3]. There is no doubt that intensive lipid-lowering therapy can further reduce the incidence of cardiovascular events in patients with very-high-risk ASCVD.

Statins are considered to be the cornerstone of lipid-lowering therapy. Statins are not only widely used but also have anti-inflammatory properties [4]. However, the TNT study of 100,001 patients with stable coronary disease and LDL-C 3.4 mmol/L showed that patients with ASCVD still had residual cardiovascular risk even if they were treated with high-intensity statins (atorvastatin 10 mg/d and 80 mg/d) [5]. In addition, remnant cholesterol has been proven to be a possible risk factor for ASCVD [6]. Therefore, how to reduce these residual risks still requires further efforts.

This two-center study was conducted from April 2019 to June 2020. ASCVD patients at very high risk in the Department of Cardiology, Tianjin Chest Hospital and the Department of Cardiology, Tianjin Hospital were recruited. Very-high-risk ASCVD patients who met the criteria of the guidelines on the management of blood cholesterol of the American Heart Association/American Heart Association (AHA/ACC) [2] were enrolled. Very high risk was defined by a history of multiple (2) major ASCVD events (recent occurrence of acute coronary syndrome (within 12 months), myocardial infarction (MI) 12 months, ischemic stroke, and symptomatic peripheral arterial disease) or a history of 1 major ASCVD event along with 2 high-risk conditions [2]. Patients with severe hepatic or renal insufficiency, heart failure, or type 1 diabetes mellitus were excluded. This study was performed in accordance with the Helsinki Declaration and was approved by the Hospital Ethics Committee of Tianjin Chest Hospital. All treatments and assessments were performed after the informed consent of patients or their families was obtained.

To explore the therapeutic effect of PCSK9 inhibitors on the lipidomic profile of those patients, we compared the alterations in blood lipid composition between patients treated with atorvastatin alone and patients treated with PCSK9 inhibitors on top of statins. Patients were randomly divided into the combined group and the atorvastatin group according to the envelope method. A random grouping scheme within a sealed opaque envelope was opened by the researchers according to the sequence of patients, and the patients were divided into groups according to the scheme within the envelope.

Atorvastatin was given 20 mg orally once a night for 4 weeks in the atorvastatin group. Evolocumab injection (Amgen Manufacturing Limited, USA) was used (140 mg, every 2 weeks) in the combined group for 4 weeks on top of atorvastatin (20 mg per day). All patients received lipid-lowering therapy for the first time. Standard secondary prevention of ASCVD, such as antiplatelet therapy, was provided equally in both groups [2, 3]. Fig. 1 shows the flowchart of this study. 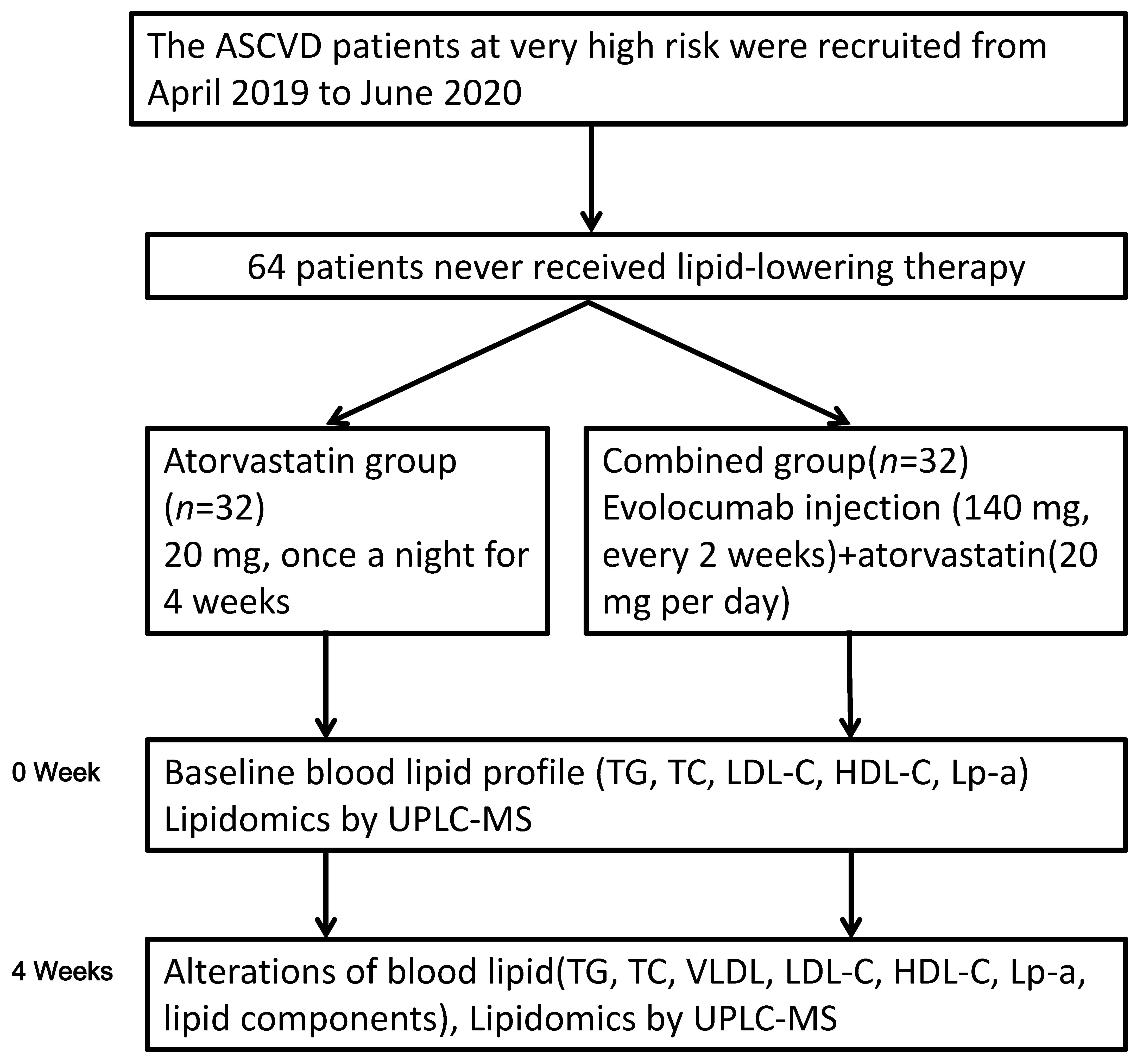 The serum of all patients was collected before treatment and 4 weeks after treatment in each group. Participants were required to avoid consuming high-fat, high-protein food and alcohol at the last meal before examination. After 12 hours of fasting, forearm venous blood was drawn for assessment. The laboratory results of triglycerides (TG), total cholesterol (TC), high-density lipoprotein cholesterol (HDL-C), LDL-C, and lipoprotein-a (Lp-a) were recorded after each assessment. Adverse reactions during drug treatment were carefully observed in all patients.

SIMCA-P version 13.0 (Umetrics, Umea, Sweden) was used for multivariate statistical analysis. An orthogonal partial least squares discriminant analysis (OPLS-DA) model was constructed, and then the data were summarized, classified and discriminantly analyzed. The reliability of the model was tested by 7 cross-validations. According to the OPLS-DA model, the variable importance in projection (VIP) was obtained, and the metabolites with significant changes in serum were preliminarily screened. A combined VIP value 1 and P 0.05 were used to screen the differential lipid components. The measurement data with a normal distribution are expressed as the mean standard deviation, and the t-test was used for comparisons between groups. For nonnormally distributed data, medians with interquartile ranges were expressed and tested by the Mann-Whitney U-test. The count data were analyzed by the test. P 0.05 was considered significant. SPSS version 22.0 (SPSS Inc., Chicago, IL, USA) was used to process the data. GraphPad Prism 7 software (GraphPad Inc., San Diego, CA, USA) was used for graph production.

A total of 64 patients were included. All patients in the atorvastatin group (n = 32) and the combined group (n = 32) completed a 4-week treatment without loss of follow-up. The baseline patient characteristics of the two groups are shown in Table 1. There was no significant difference in the baseline data of age, BMI, underlying diseases, or the proportion of percutaneous coronary intervention (PCI) between the two groups (P 0.05).

There was no significant difference in blood lipidomic profile between the two groups before treatment. After 4 weeks of treatment, the levels of LDL-C in both groups were significantly lower than before (all P 0.05). The level of Lp-a in the combined group was significantly lower than that before treatment, but this result was not found in the atorvastatin group. It should be pointed out that the decrease in LDL-C and Lp-a levels in the combined treatment group was significantly greater than that in the atorvastatin group after treatment (Fig. 2, Supplementary Tables 1,2). Unfortunately, there was no significant change in the levels of TG and HDL-C after 4 weeks of treatment in either group. Differences in the blood lipidomic profile in the two groups are shown in Fig. 2 and Supplementary Table 2. 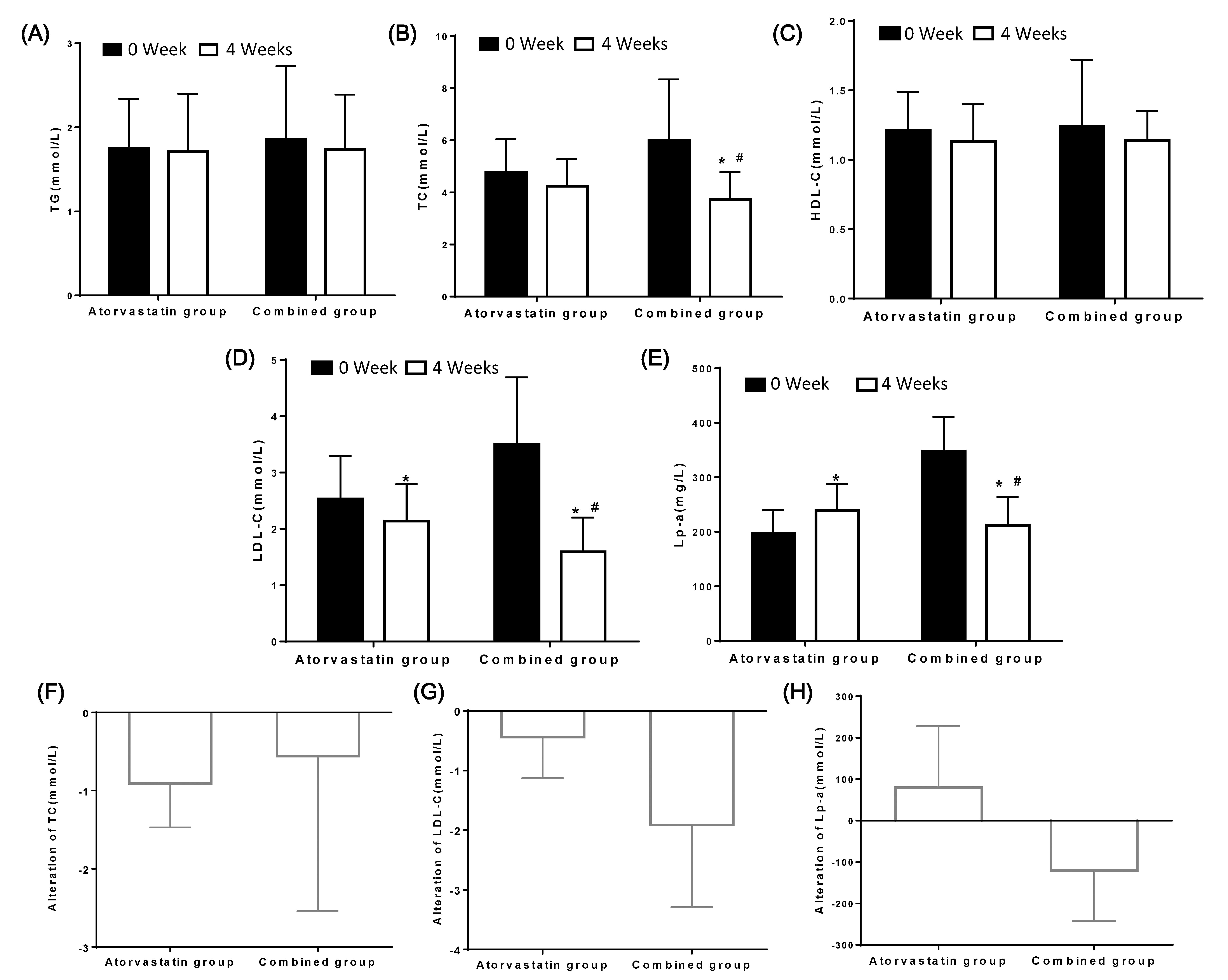 3.3 Effect of PCSK9 inhibitors on the LDL-C compliance rate

3.4 Change in all lipid classes after the administration of the PCSK9 inhibitor 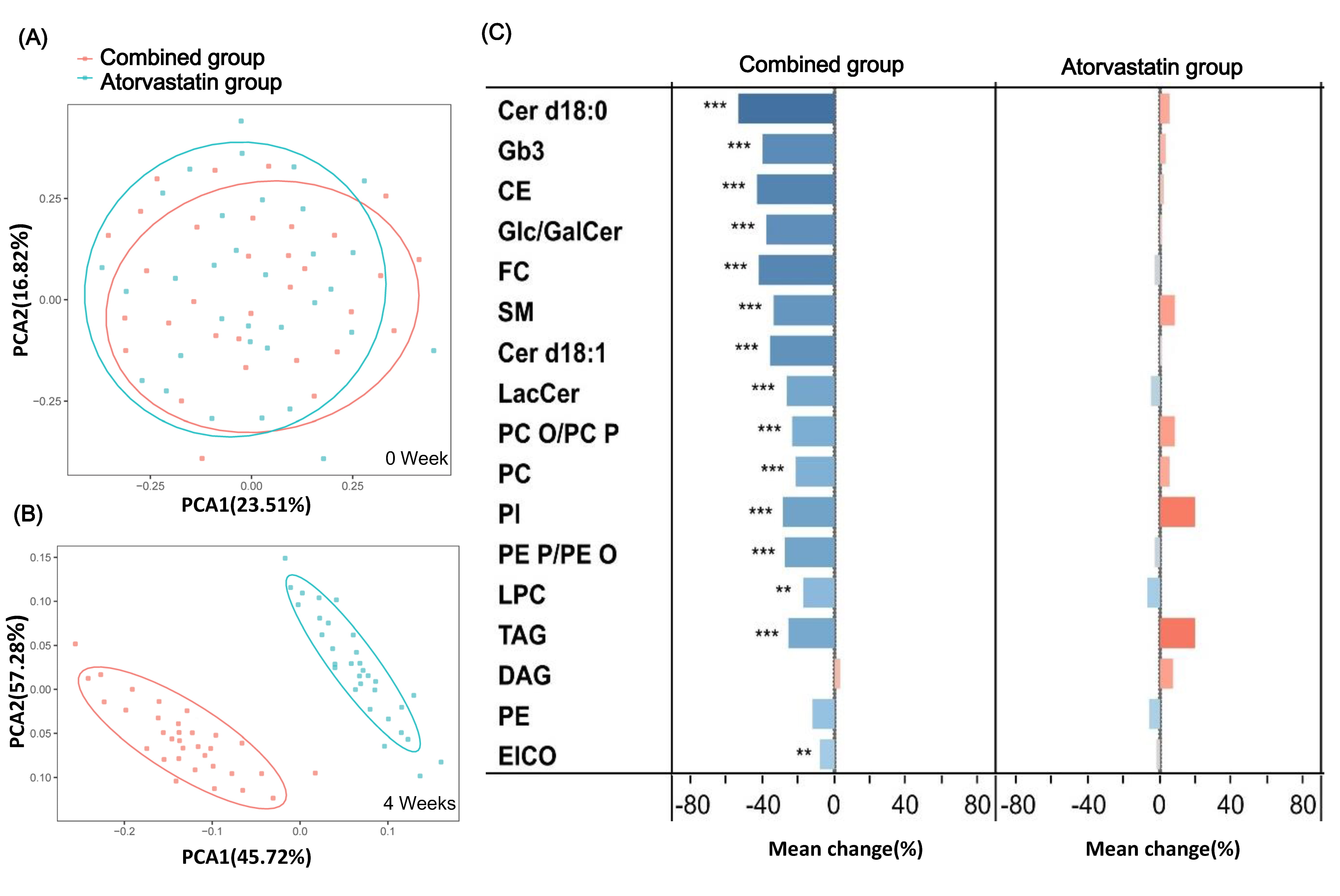 During the course of 4 weeks of treatment, only one patient had an adverse drug reaction (a rash) in the combined group, which improved after anti-allergic treatment. There were no other adverse reactions, such as abnormal liver function or increased muscle enzymes, in either group.

Very-high-risk ASCVD was defined for the first time in the 2018 AHA/ACC Cholesterol Management Guide [2]. LDL-C and Lp-a are independent risk factors for ASCVD [12]. At present, intensive lipid regulation is the key treatment to improve the prognosis of ASCVD. The importance of LDL-C level control in the secondary prevention of ASCVD patients has been increasingly emphasized. The 2018 AHA/ACC Cholesterol Management Guide states that the LDL-C level of very-high-risk ASCVD patients should be below 1.8 mmol/L (70 mg/dL) [2]. Accoding to 2019 ESC/EAS Guidelines for the management of dyslipidaemias, for patients with very high risk, regardless of primary prevention or secondary prevention, the LDL-C goal should be less than 1.4 mmol/L [3].

After 4 weeks of treatment with the PCSK9 inhibitor evolocumab supplementary to oral atorvastatin, the levels of TC, LDL-C, and Lp-a were significantly lower than those before treatment. Although the levels of TG and HDL-C in the combined group had a downward trend, the changes were not significant. These findings suggest that PCSK9 inhibitors can effectively reduce the level of cholesterol, except for HDL-C, in patients with very-high-risk ASCVD. Although the level of LDL-C decreased in the combined group, the decrease was smaller than that reported in other studies [16]. This difference may be related to the shorter treatment time in our study. In the postanalysis of the FOURIER phase III study [16], LDL-C decreased by approximately 59% at 48 weeks after treatment in the evolocumab injection group (95% CI: 58%–60%, P 0.001). The average decrease was approximately 1.46 mmol/L (56 mg/dL). In the present study, only the lipidomic profile were observed after 4 weeks of PCSK9 inhibitor administration. Therefore, it is necessary to prolong the follow-up time and to increase the sample size, which is what we will do in the future.

At present, there are many kinds of drugs that can reduce LDL-C, and they are widely used in the clinic, but drugs that can effectively reduce Lp-a are still in the pipeline. Although this study confirmed that PCSK9 inhibitors can reduce the level of Lp-a, the mechanism is not completely clear [17, 18, 19].

The attainment of the LDL-C target is the key to affecting the prognosis of patients with very-high-risk ASCVD. In this study, after 4 weeks of PCSK9 inhibitor administration, 50% of patients met the target LDL-C level in the combined group, which was higher than that in the atorvastatin group (23.3%). This finding also indicates that PCSK9 inhibitors can not only reduce the level of LDL-C but also decrease LDL-C faster. Earlier attainment of the target means an earlier benefit for patients.

We also found that evolocumab has little effect on TG while lowering cholesterol. In addition, there was no significant change in HDL-C levels before and after the administration of the PCSK9 inhibitor. There is still a large debate on the relationship between HDL-C and cardiovascular disease, which tends to be “U-shaped”; that is, high or low levels of HDL-C may increase the risk of cardiovascular disease [21, 22]. In this study, only one patient in the combined group had an allergic reaction, which manifested as a rash. After oral anti-allergic drugs were administered, the allergic reaction was mild. Thus, the PCSK9 inhibitor was safe. As reported, the main adverse drug reactions to PCSK9 inhibitors were nasopharyngitis, upper respiratory tract infection, influenza, and back pain, and the incidence rate was less than 2% [13]. However, there was no significant difference in the occurrence of adverse drug reactions between PCSK9 inhibitors and statins, which also shows that the use of PCSK9 inhibitors is safe [23].

There are also some limitations in this study. First, this study is a double-center study with a small number of selected patients. Second, the impact of PCSK9 and atorvastatin on individual lipid species within each lipid class was not analyzed. Third, PCSK9-related genes, which may have some influence on the therapeutic effect of PCSK9 inhibitors, were not detected. Finally, we studied only the short-term changes in the blood lipidomic profile. There is a lack of long-term follow-up data for treatment effects and long-term impacts on cardiovascular events.

In conclusion, the PCSK9 inhibitor evolocumab is efficacious and safe in treating very-high-risk ASCVD patients. The universality of the efficacy needs to be further confirmed, and more large-scale, multicenter, long-term, randomized trials need to be carried out.

The study was obtained permission from the Ethics Committee of the Tianjin Chest Hospital (Ethics approval number: 2019-00161). All treatments and assessments were performed after the informed consent of patients or their families was obtained.

We thank the anonymous reviewers for excellent criticism of the article.