Atrial fibrillation (AF) is the most common tachyarrhythmia encountered in clinical practice [1]. Due to progressive population aging, the prevalence of this condition, currently settled at 2–4% worldwide, is deemed to double in the coming decades [1, 2, 3, 4]. Coronary artery disease (CAD) frequently coexists with AF, and management of these associated conditions can be challenging [5]. In addition, AF may induce angina-like chest pain and increase markers of myocardial damage, even in the absence of classical CAD [6].

Despite the frequent coexistence of these two cardiac conditions, the prognostic independent implication of AF in patients with stable CAD remains controversial. In particular, although preclinical and clinical evidence suggests that AF itself may promote a reduction in coronary blood flow [7, 8, 9, 10, 11], less is known regarding the impact of the arrhythmia in stable CAD patients in terms of cardiac ischemic outcomes.

The aim of the present systematic review and meta-analysis of prospective adjusted observational studies is, therefore, to assess the prognostic independent impact of concomitant AF on stable CAD patients in terms of mortality, coronary events, and cerebrovascular events.

This systematic review and meta-analysis was performed in accordance with the PRISMA [12] and MOOSE [13] guidelines.

PubMed/MEDLINE and Google Scholar databases were screened for pertinent articles, using the following keywords: “coronary artery disease”, “stable”, “atrial fibrillation”, “death”, “myocardial infarction”, “stroke”, “coronary revascularization”. The search was ended in May 2019. Two independent reviewers (AS and VV) screened the retrieved citations through the title and/or abstract, and all disparities were resolved through consensus. Studies were included if they reported data from observational prospective studies describing the risk of all cause death (primary outcome) and/or other cardiovascular outcomes (myocardial infarction, coronary revascularization, stroke) in patients with stable CAD and AF vs patients without history of the arrhythmia, provided that the risk estimates were adjusted for possible confounding variables. Studies that did not fulfil the aforementioned study design criteria or in which data were not adequately reported were excluded from the analysis. Risk of bias evaluation of the included studies was performed using the Newcastle Ottawa Scale.

Continuous variables and categorical variables were reported as numbers and percentages, respectively. Median (interquartile range—IQR) was used for the summary statistics. Pairwise meta-analysis of adjusted hazard ratio (HR) of the evaluated endpoints in stable CAD patients with versus without AF was performed after logarithmic transformation using a random-effect model (inverse-variance weighting). Forest plots for each outcome were reported. Cochran I test was used to assess heterogeneity in the included studies. Funnel plot analysis and Egger’s test for funnel plot asymmetry were used to assess potential publication bias. Statistical analyses were performed with R version 4.0.0 (R Foundation for Statistical Computing, Vienna, Austria). All five included studies evaluated the primary outcome, while two studies reported adjusted risk estimates for stroke, three for myocardial infarction and two for coronary revascularization. Details on the adjustment performed in each study are reported in Supplementary Table 1 in the Supplementary Material Pooled analysis of adjusted observational results indicates an increased risk of death in stable CAD patients with concomitant AF, compared to stable CAD patients without the arrhythmia (HR 1.39, 95% CI: 1.17–1.66). Low degree of heterogeneity was found for this outcome (I = 35%), and funnel plot analysis (Supplementary Fig. 1) did not suggest potential publication bias (Egger’s test p-value 0.28). Fig. 2 reports the forest plot for the primary outcome. Focusing on secondary outcomes (Fig. 3 and Supplementary Figs. 2–4), AF independently increased the risk of stroke in this group of patients (HR 1.88, 95% CI: 1.45–2.45, I = 0%). Instead, risk of myocardial infarction (HR 0.90, 95% CI: 0.66–1.22, I = 25%) and coronary revascularization (HR 0.96, 95% CI: 0.79–1.16, I = 0%) did not differ in stable CAD patients with or without AF. 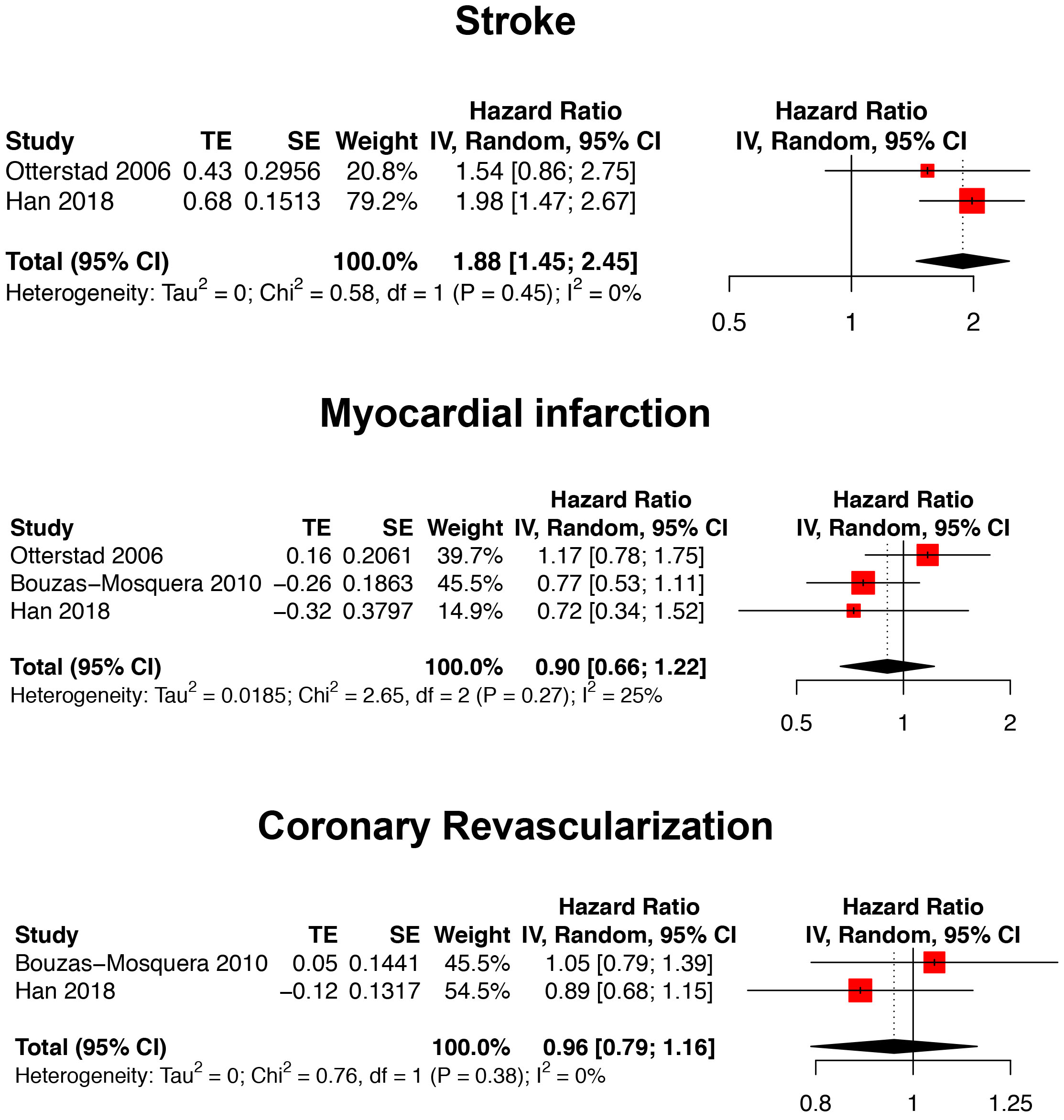 The main findings of the present systematic review and meta-analysis are the following:

AF independently increases the risk of death in patients with stable CAD by 39%;

AF does not seem to result into an increased risk of classically defined coronary events (myocardial infarction and coronary revascularization).

AF and CAD are two frequently coexisting conditions, sharing common risk factors, such as age, hypertension, diabetes mellitus, sleep apnoea, obesity and smoking [5]. Considering the increasing life expectancy, these two conditions are deemed to coexist even more in the near future. It is, therefore, critical to evaluate the independent impact (net of possible confounder) that the presence of the most common atrial arrhythmia exerts in patients with stable CAD. Particularly, the eventual impact of AF on the risk of future coronary events is still greatly unexplored. The present systematic review strongly highlights the unexpected paucity of data assessing the clinical impact that AF exerts per se on stable CAD patients: in fact, only 5 studies address the hardest clinical endpoint (death), and even fewer the other cardiovascular outcomes (stroke, myocardial infarction and coronary revascularization).

The present analysis shows, in any case, that AF has an independent prognostic influence in patients with stable CAD, conferring an additional 39% risk of death, as well as an 88% additional risk of incident stroke. Being CAD a risk factor for stroke and death per se, this relationship entails an even greater risk for these complications compared to AF alone. On the other hand, interestingly, AF does not appear to confer a worse CAD related outcome. However, before drawing definite conclusion about this relationship, it must be taken into account the small number of studies included into the analysis, which could entail statistical underpowering on the topic.

Future studies are warranted to reach definitive conclusions on this topic. Moreover, evidence is needed investigating the effect of the AF related “irregularly irregular” rhythm on the coronary circulation, both in terms of acute hemodynamic data than potential pro-atherogenic effect.

First, the observational design of the included studies carries an inherent risk of unaccounted confounders. In addition, the lack of patient-level data limited establishing eventual prognostic implications of the specific AF subtype (paroxysmal, persistent, permanent). Moreover, data on the safety profile of a combined therapy with anticoagulant and antiplatelet agents are missing and considerations on this regard were not possible. Finally, the restricted number of studies evaluating cardiovascular outcomes other than death, limits inferential power to detect potentially significant differences in these outcomes among groups of interest.

In patients with stable CAD AF exerts an independent negative prognostic effect, increasing the risk of death and stroke. However, the small number of eligible studies included in this analysis highlights the astonishing lack of data regarding prognostic implications of concomitant AF in patients with stable CAD, stressing the need for future studies focused on this topic, as well as on the hemodynamic effects exerted by the arrhythmia on the coronary circulation.

We would like to express our gratitude to all the peer reviewers for their opinions and suggestions.