Percutaneous coronary intervention (PCI) is applied for the treatment of patients with acute coronary syndrome [1]. The standard of care following PCI is treatment with dual-antiplatelet therapy, consisting of a thienopyridine (typically clopidogrel) with aspirin, to prevent re-infarction and other subsequent ischemic events [2]. While antiplatelet drugs have adverse effects on the gastrointestinal (GI) system, including GI bleeding, peptic ulcer, and perforated peptic ulcer, proton pump inhibitors (PPI) are prescribed to reduce these side effects in those patients who require antiplatelet therapy and in those who are at high risk of GI injury.

Though some pharmacodynamic studies have concluded that there was a higher platelet aggregation in patients on clopidogrel combined with PPI than clopidogrel therapy alone [3,4], clinical studies have inconsistent and conflicting outcomes regarding concomitant use of clopidogrel and PPI on the occurrence of cardiovascular events. Clinical practice guidelines have also offered conflicting guidance on the significance of this interaction. In 2009, the Food and Drug Administration (FDA) issued a warning to avoid concomitant use of clopidogrel with drugs which are strong or moderate CYP2C19 inhibitors such as the PPIs omeprazole and esomeprazole. On the other hand in 2012, the American College of Cardiology Foundation and American Heart Association proclaimed that they did not prohibit the use of PPI agents in appropriate clinical settings and appealed for more randomized controlled trials (RCT) until enough clinical evidence exists to inform a more evidence-based recommendation [5-8].

The results of existing meta-analyses [9-16] on the efficacy and safety of clopidogrel combined with PPIs are also inconsistent, which may cause confusion to clinicians. Some meta-analyses [11,14] suggested that clopidogrel combined with PPIs can increase the incidence of adverse cardiovascular events, while others [9,10,12,13,15,16] suggested that PPIs do not increase adverse cardiovascular events. The principal sources of this inconsistency are different target populations and differences in baseline characteristics of patients. Therefore, we performed a meta-analysis based on strict inclusion and exclusion criteria in order to further determine the efficacy and safety of clopidogrel combined with PPI versus clopidogrel without PPI, whether or not aspirin was used in patients undergoing PCI, to provide evidence for clinical treatment decision-making.

Two reviewers (YYH AND RD) carefully searched the following databases: EMBASE, PubMed/Medline, Web of Science, the Cochrane Library and China National Knowledge Infrastructure (CNKI). The terms ‘percutaneous coronary intervention’,‘proton pump inhibitors’, clopidogrel and their subject words and random words, and the abbreviations PCI and PPI were searched. Names of individual PPIs, i.e. ‘omeprazole, pantoprazole, lansoprazole, esomeprazole, ilaprazole, and rabeprazole’, were also included in our search strategy. Any dispute was resolved by consensus of the two primary reviewers where possible or decided by the third reviewer (ZX L).

The inclusion criteria for studies in the meta-analysis were: (1) the study was a randomized controlled trial (RCT) or cohort study; (2) every patient underwent PCI, not limited to any particular disease diagnosis; (3) clopidogrel was used in every patient, regardless of whether aspirin was used; (4) the control group must be no PPI or a placebo control; (5) English language; (6) outcomes are limited to GI bleeding and major adverse cardiac events (MACE).

The exclusion criteria included: (1) study was not an RCT or cohort study, (e.g. crossover studies, case reports, reviews, meta-analyses); (2) cohort study lacking propensity score matching (PSM) or without a balanced baseline; (3) not all patients received PCI; (4) not all patients were taking clopidogrel; (5) patients were taking other antiplatelet drugs besides clopidogrel or aspirin; (6) the control was not either no PPI or a placebo; (7) outcomes are neither GI bleeding nor MACE; (8) no full text, such as a conference abstract.

Three RCTs and 4 cohort studies were included in this meta-analysis. The risk of bias of RCTs was assessed from the following aspects: random sequence generation (selection bias), allocation concealment (selection bias), blinding of participants and personnel (performance bias), blinding of outcome assessment (detection bias), incomplete outcome data (attrition bias), selective reporting (reporting bias) and other biases. The risk of bias of cohort studies was assessed by the Newcastle-Ottawa scale, which contains the following aspects: representativeness of the exposed cohort, selection of the non-exposed cohort, ascertainment of exposure, demonstration that outcome of interest was not present at start of study, comparability of cohorts on the basis of the design or analysis, assessment of outcome, sufficiently long follow-up for outcomes to occur and adequacy of follow up of cohorts.

The work has been reported in line with PRISMA (Preferred Reporting Items for Systematic Reviews and Meta-Analyses) and AMSTAR (Assessing the methodological quality of systematic reviews) Guidelines. 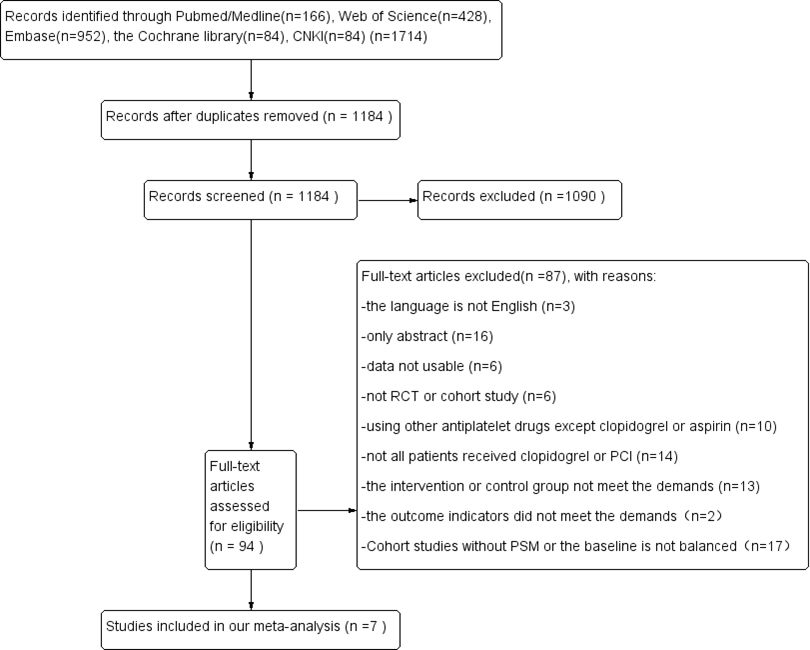 There are 3 RCTs and 4 cohort studies in our analysis. The characteristics of the included articles are in Table 1. PPIs in included studies included omeprazole, lansoprazole, pantoprazole, and rabeprazole.

Table 1.Characteristics of the included articles
3.3 Risk of bias of included studies

Three RCTs and 4 cohort studies were included in this meta-analysis. The 3 RCTs did not mention allocation concealment, and in one RCT study, the results reported were not completely consistent with those stated in the study design, which is considered high risk. The quality of 4 cohort studies was relatively high. The risk of bias of included studies is in Fig. 2. Analysis of GI bleeding. Forest plot of the meta-analysis depicting the comparison of GI bleeding in patients undergoing PCI in the PPI group and the no PPI group. The size of the square represents the weight of each article, which is determined by the sample size of the article. The funnel plot of MACE is in Fig. 6. The publication bias of MACE is relatively low as evidenced by the symmetrical funnel. Thienylpyridines are P2Y12 receptor competitive inhibitors, including ticlopidine, clopidogrel, prasugrel. Clopidogrel is the most commonly used thiophene pyridine drug in clinic. It can inhibit ADP activated platelets by blocking the ADP receptor P2Y12 on the surface of platelets. Clopidogrel is a prodrug (i.e. active only upon metabolization), which can selectively and irreversibly bind to ADP receptor P2Y12 on the surface of platelets after being oxidized and hydrolyzed by CYP450 enzyme. It can inhibit the binding of fibrinogen to platelet glycoprotein GP IIb/IIIa receptors and the activation of glycoprotein GP IIb/IIIa complex mediated by ADP, thus inhibiting platelet aggregation. Since PPIs are mainly metabolized through liver P450 enzymes, the isoenzymes involved in metabolism mainly include CYP2C19 and CYP3A4. From the perspective of drug metabolism, both clopidogrel and PPI are metabolized through CYP2C19, so drug interaction may occur when they are combined because they compete for the same binding site of CYP2C19. The degree and result may depend on the relative affinity of each drug with CYP2C19. Drugs with higher affinity will bind with CYP2C19 and inhibit the biotransformation of drugs with lower affinity. Therefore, we should pay attention to the drug effects of clopidogrel combined with PPI. Omeprazole has the most obvious potential antiplatelet effect on clopidogrel. PPIs with low affinity for CYP2C19, such as pantoprazole and rabeprazole, are recommended [24].

Some meta-analyses [11,14] have suggested that clopidogrel combined with PPIs can increase the incidence of adverse cardiovascular events, while others [9,10,12,13,15,16] have suggested that PPIs do not increase adverse cardiovascular events. The inconsistency of the results of existing meta-analyses on the topic whether PPI can increase the probability of MACE in patients taking clopidogrel [9-16], may come from the following issues:

(4) The antiplatelet drug is inconsistent. In some meta-analyses [11,12,15] it is the dual antiplatelet therapy combination of aspirin and clopidogrel, in some [13,14,16] it is only clopidogrel, without mention of whether aspirin was used.

It is worth mentioning that among the excluded cohort studies without balanced baseline, PPI tends to be given to PCI patients with high risk of bleeding, but the assessment for high risk of bleeding was not consistent. In order to provide consistency in defining this population for clinical trials, ARC-HBR consensus definition has been proposed [25] and validated in large cohorts of patients undergoing PCI [26,27]. We will pay attention to this field and when there are at least 3 clinical studies on the effect of clopidogrel combined with PPI on PCI patients with high risk of bleeding according to ARC-HBR consensus definition, we will include this factor and update the meta-analysis. The purpose of this meta-analysis was to compare the safety and efficacy of clopidogrel combined with PPIs in patients undergoing PCI. Seven studies involving 9932 patients after PCI were included in this study. The results showed that clopidogrel combined with PPI did not increase the incidence of MACE, while use of PPI reduced the incidence of GI bleeding events.

Due to the strict inclusion and exclusion criteria, we included relatively few studies. One limitation of our meta-analysis is no subgroup identification of PPIs. We attempted to study specific PPIs, but the amount of literature is too small to support subgroup reporting. Another limitation of our meta-analysis is that the composite MACE outcomes were not defined and reported uniformly among the pooled studies. MACE in our meta-analysis is the composite of death, all-cause death, cardiac death, stoke, definite or probable stent thrombosis, nonfatal myocardial infarction, occasional angina, unplanned target vessel revascularization and secondary heart failure. We did not evaluate a specific MACE element because not every specific MACE was reported in every included study. Therefore, a larger number of RCTs and cohort studies are still necessary to clarify this question and offer evidence for clinical decision- making.

For PCI patients taking clopidogrel and PPI therapy, PPI reduced the risk of GI bleeding while having no impact on MACE.

Rong Duan designed our study and registered it in prospero website. Yaoyao Han and Rong Duan searched the literatures from the databases by computer, then screened the studies independently. Any dispute involving screening studies and analysing data was settled by discussion of Yaoyao Han and Rong Duan or decided by the third reviewer Zhengxiang Li. Yaoyao Han wrote this article, then Rong Duan and Zhengxiang Li reviewed and revised this article. All authors read and approved the final manuscript.

The authors acknowledge the role of all support staff in the study.