Mitral regurgitation (MR) is a major cause of morbidity and mortality affecting 38,270 persons per 1 million US adult population [1]. Subgroup analysis of the European registry of MR (EuMiClip) data showed a 5.2% prevalence of significant MR and 70% of patients with severe primary MR had a class I indication for surgery [2]. Transthoracic echocardiography (TTE) is the standard approach for the assessment of MR. Despite its numerous technical and non-technical limitations, TTE has been recommended by the American Society of Echocardiography for the quantification of MR [3]. Cardiac magnetic resonance (CMR) is a favored diagnostic imaging technique for valvular heart disease due to its numerous features as non-ionizing radiation, excellent imaging quality, unlimited scan widows with high accuracy and reproducibility, and tissue diagnosis [4]. We wanted to evaluate the correlation between TTE and CMR in the quantification of MR and explore their complementary use for enhancing diagnostic accuracy and improving patient outcomes.

Our study was a 1-year cross-sectional, open-labeled, non-randomized, single cohort study conducted at a single cardiac center in a tertiary care hospital. Investigators weren’t blinded to the study group. The study design was approved by the hospital ethics committee review board, all participants signed written informed consents, study procedures were carried out following the Code of Ethics of the World Medical Association (Declaration of Helsinki), all information/images were anonymized, and the privacy rights of the study participants were observed diligently. The echocardiographic and CMR assessment outcomes were coded, and the data was analyzed with the Statistical Package for the Social Sciences software for MAC (SPSS®) version 26. Quantitative (continuous) data was expressed as means and standard deviations, while qualitative (categorial) data was expressed as medians and ranges. Parametrically distributed quantitative variables were compared with the Independent two-tailed t-test and correlated with Pearson’s Correlation Coefficient, respectively. Pearson’s Correlation Coefficient (r) value was interpreted as follows: 1 means perfect correlation, 0.75-1.0 is strong correlation, 0.50-0.75 is moderate correlation, 0.25-0.5 is weak correlation, and 0.25 means no relationship. The intraclass correlation coefficient (ICC), two-way random model and absolute agreement type were used for comparison between quantitative measurements. The scale of ICC ranges from 0 to 1 where 1 represents perfect reliability with no measurement error and 0 represents no reliability. ICC Value 0.5 indicates poor reliability, 0.5-0.75 indicates moderate reliability, 0.75-0.9 indicates good reliability and greater than 0.90 indicates excellent reliability [7]. Bland-Altman plot was used for the evaluation of bias between the means of the two modalities within 95% limits of agreement [8]. For categorial agreement, Cohen’s kappa coefficient () was used. Kappa values 0 means no agreement, 0.01-0.20 means none to slight agreement, 0.21-0.40 means fair agreement, 0.41-0.60 means moderate agreement, 0.61-0.80 means substantial agreement, and 0.81-1.00 means almost perfect agreement [9]. The confidence interval was set to 95% and the margin of error accepted was set to 5%. Any comparison considered statistically significant was at P 0.05 or less.

Table 5.Intraclass correlation between Echo-RVol and CMR-RVol by indirect quantification 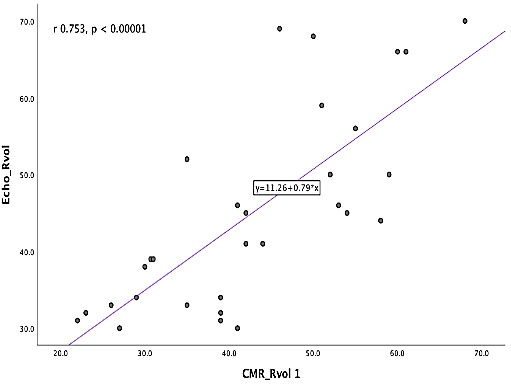 Bar chart showing the patients with the same versus different MR category between echo versus CMR based on Rvol. 1. Blue; Patients with mild MR, 2. Red; Moderate MR, 3. Green; Moderate to severe MR and 4. Orange; Severe MR. 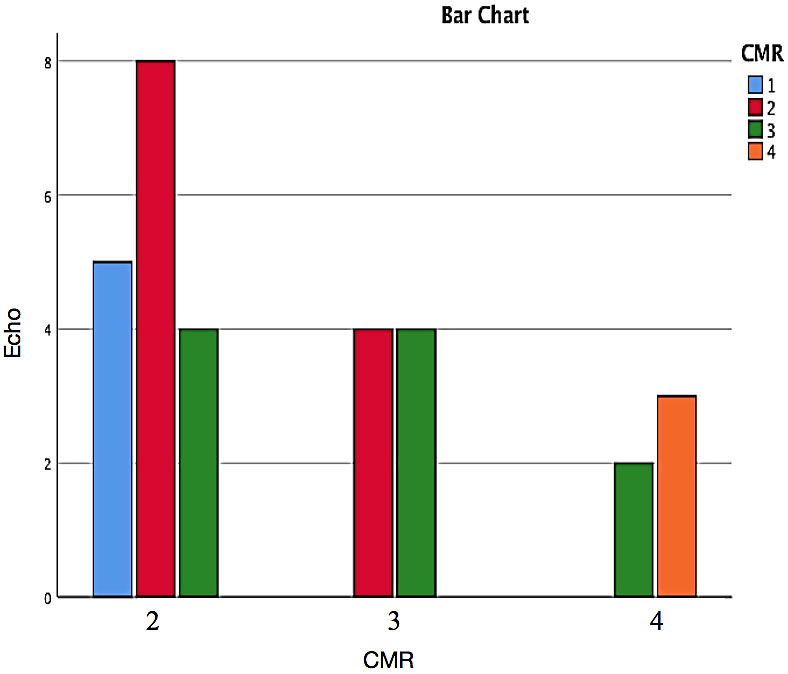 Bar chart showing the patients with the same versus different MR category between echo versus CMR based on RF. 1.Blue; Patients with mild MR, 2. Red; Moderate MR, 3. Green; Moderate to severe MR and 4. Orange; Severe MR.

Mitral regurgitation (MR) is a major cause of morbidity and mortality worldwide. Transthoracic echocardiography (TTE) is the standard approach for assessment of MR. Cardiac Magnetic Resonance (CMR) is a favored diagnostic imaging technique for valvular heart disease. We hypothesized that integration of TTE and CMR will enhance the diagnostic accuracy of MR and improve patient outcomes. We wanted to evaluate the correlation between TTE and CMR in the quantification of MR. Our 1-year cross-sectional, open-labeled, non-randomized, single cohort study revealed a statistically significant good reliability between Echo_RVol and CMR_RVol by the indirect quantification (ICC = 0.859, 95% CI 0.706-0.932, P 0.0001). However, the integrated grading of MR by Echo_RF waived this agreement ( = 0.251, P = 0.024). Sachdev, V et al. has reached the same conclusion, where the Echo_RVol correlated well with CMR_RVol for indirect quantification of MR, but the integrated assessment where regurgitant fraction (RF) was used for grading by TTE minimized the agreement between echocardiography and CMR [10]. Another study by Uretsky S, et al. concluded that the grading of MR severity had a significant moderate agreement between TTE and CMR in the overall cohort (r = 0.6; P 0.0001) and a significant fair correlation between TTE and CMR in the subset of patients sent for mitral valve surgery (r = 0.4; P = 0.01). The post-surgical left ventricle reverse remodeling quantified by CMR had a significant strong correlation with the MR severity when assessed by MRI (r = 0.85; P 0.0001) and non-significant poor correlation with the echocardiographic MR severity (r = 0.32; P = 0.1) [11]. The American society of echocardiography has recommended RF integrated approach for quantification of MR [3]. Calculation of the RF as the ratio of the RVol to the LV stroke volume is valid for quantification of aortic regurgitation. However, the same principal doesn’t apply for MR leading to quantification error. CMR has a unique ability to quantify both RVol and RF by phase-contrast velocity mapping in a single step. It is easily reproducible in patients indicated for follow up and is extremely important for quantification of atrioventricular valvular incontinence. Our study showed that CMR_RVol had a moderate correlation with Echo_RVol (ICC 0.557, P 0.001). The CMR direct flow quantification method downgraded the RVol (34.23 11.66 mL/beat as assessed by CMR vs 45.0 12.99 mL/beat when assessed by TTE). Possible reasons for underestimation of the RVol by CMR include technical limitations of the CMR which led to underrepresentation of patients with moderate, moderate-severe, and severe MR, respiratory and electrical gating artifacts, and/or lower temporal resolution of the CMR flow measurement (25-45 ms) compared to the continuous wave doppler echocardiography (2 ms) which led to quantification error of the high-velocity, short duration MR jets [12]. The time-resolved multidimensional velocity encoded flow CMR (4D flow) has better quantification of the MR irrespective of the direction and/or the number of jets as the 4D can measure the jet flow with high spatial resolution in x-, y-, and z-directions simultaneously [4].

Our study didn’t have missing data allowing robust per-protocol analysis, the investigators who analyzed and reported the CMR assessment outcomes were blinded to the participants’ clinical data and TTE results, and a second investigator blinded to the CMR measurements reported by the first investigator repeated them at a different time interval to evaluate the inter-observer reproducibility. On the other hand, the study has important limitations. It was a single centered study with small sample size. Being a cross-sectional study with a lack of lengthy follow up didn’t allow us to investigate the chronological relationship between the TTE results, the CMR measurements, and the clinically driven outcomes.

In our study, the positive correlation between the TTE and the CMR in quantification of mitral RVol highlights the potential role of CMR as a complementary imaging tool to TTE, especially in limited or inconclusive TTE studies. The RF by CMR is more accessible and reproducible, unlike the challenging Echo_RF. This unique feature of CMR leads to better grading and classification of MR which enhances MR management strategy and may improve patients’ cardiovascular outcomes. Large prospective studies are warranted to improve the sensitivity and accuracy of the phase-contrast velocity mapping and compare CMR vs TTE regarding the measurement of cardiovascular clinical outcomes in patients with valvular heart disease, especially in asymptomatic MR patients who do not have Class I indications for surgery.

Approved by Research and Ethical committee.

The authors would like to express their gratitude to AL Badarin, F for editing the manuscript and Rivard, A for conducting and interpreting some of the CMR imaging studies.

This research did not receive any specific grant from funding agencies in the public, commercial, or not-for-profit sectors.