Bradyarrhythmia is defined as heart rate of less than 60 beats per minute. It can be caused by intrinsic or extrinsic abnormalities. Intrinsic causes, such as age-related degeneration or infarction of sinus nodal tissues, whereas extrinsic causes include negative chronotropic pharmacologic agents, electrolyte imbalances, hypothermia, as well as hypothyroidism (Mangrum and DiMarco, 2000). Approximately one million pacemaker implantation occur worldwide secondary to bradyarrhythmia (Mond and Proclemer, 2011; Raatikainen et al., 2015). Myxedema coma is typically a sequela of chronic thyroid hormone deficiency and is characterized by the deterioration of mental status, hypothermia, hypotension, hyponatremia, and hypoventilation. It is considered to be an endocrine emergency. In the past, the overall mortality rate for myxedema coma was 60%-70%. Early disease recognition and advancements in the care provided to these patients have reduced the mortality rate to 20%-50% (Ueda et al., 2019). A precipitating event on a background history of long-standing, untreated, or inadequately treated hypothyroidism may result in myxedema coma. Infections, drugs such as: narcotics, anesthetics, and sedatives, in addition to lung diseases, congestive heart failure, and gastrointestinal bleeding maybe some of the precipitating events (Dhakal et al., 2015). In this review, we aim to emphasize the importance of recognition of the underlying cause of bradyarrhythmia before proceeding with pacemaker implantation in the setting of myxedema coma.

An 83-year-old female was brought to the emergency department after she was noted to have a low oxygen saturation at home. She was recently admitted due to acute kidney injury, and her diuresis was held on discharge. On further questioning, she reported having a non-productive cough and mild shortness of breath for the last few days. She reported no new sick contact or travel history. She has a past medical history of hypertension treated with amlodipine, permanent atrial fibrillation on rivaroxaban for CHADsVASc score of 5, hypothyroidism treated with levothyroxine, lower limb edema on furosemide as needed and hyperlipidemia treated with atorvastatin. It was noted that she had inadequate medication compliance for the last five months. Social history was negative for smoking, alcohol use, or illicit drug use. Family history was significant for diabetes mellitus. She had no known allergies. A review of systems was positive for cold intolerance, puffiness around the eyes, constipation, and sluggish responses. On arrival to the emergency department, she was noted to be hypoxic, requiring 2 liters of oxygen via nasal cannula to maintain oxygen saturation above 90%. Blood pressure and heart rates were 145/61 mmHg and 62 beats per minute, respectively. She was mildly confused to time and place, had an irregular pulse, jugular venous distention, positive hepatojugular reflux, bilateral inspiratory wheezes on lung auscultation, bilateral pitting edema up to the mid-shin, and slow deep tendon reflexes were noted. The rest of the examination was unremarkable. Initial laboratory workup revealed elevated brain natriuretic peptide (Table 1). Electrocardiogram showed atrial fibrillation with a heart rate of 60 beats per minute (Fig. 1). Chest radiograph (CXR) showed mild pulmonary edema (Fig. 2). She was admitted as acute hypoxic respiratory failure secondary to pulmonary edema due to heart failure exacerbation and was subsequently started on intravenous diuretics. Overnight, her heart rate dropped to 13 beats per minute (Fig. 3). Electrocardiogram before admission showed atrial fibrillation with a mildly rapid ventricular rate. (Fig. 4) and occasional tachycardia was also noted on telemetry. Cardiac monitor overnight showed evidence of recurrent bradycardia (Fig. 5A, B). Cardiology was consulted for pacemaker implantation in the setting of bradycardia. Echocardiography showed an ejection fraction of 55%, eccentric left ventricular hypertrophy, mild reduced right ventricular systolic function, and right ventricular systolic pressure of 52.9 mmHg. There was trace anterior pericardial effusion noted on the echocardiogram. Thyroid-stimulating hormone was ordered, and it came back significantly elevated at 96.7 UIU/L (Table 1). On further assessment by cardiology service, it was determined that she had congestive heart failure associated with bradycardia, which was attributed to hypothyroidism, and hormone replacement was recommended with no recommendation for pacemaker insertion at that time. On follow-up, the patient was subsequently started on levothyroxine 200 mcg for a minimum of 2 weeks, with a plan to recheck her thyroid-stimulating hormone and free thyroxine level in 2-3 weeks and titrate down to 150 mcg accordingly.

Table. 1 Laboratory work up on presentation. Electrocardiogram was done on admission showing atrial fibrillation, as evidenced by the absence of P-waves, narrow QRS complex, and irregular rhythm, with a pulse rate of 60 beats per minute. 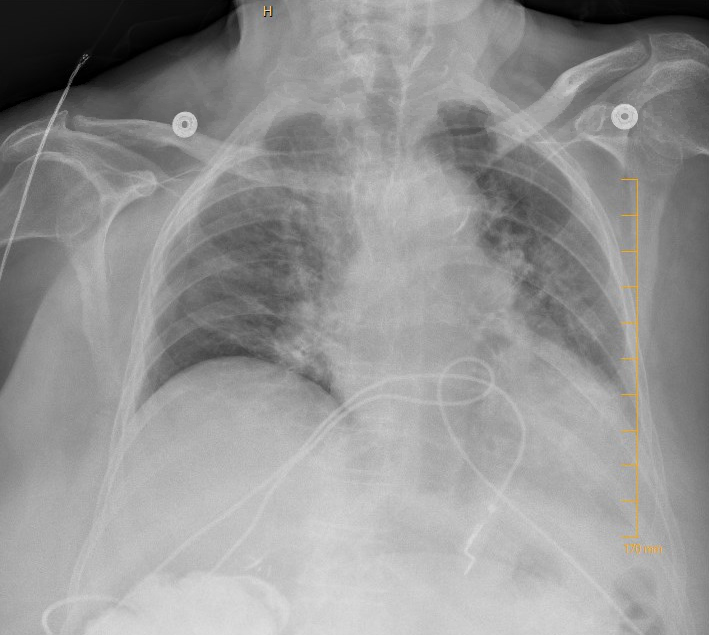 Cardiac rhythm strip recorded during the patient's stay in the intensive care unit, showing atrial fibrillation with a slow ventricular response and a pause of 3.1 seconds. Electrocardiogram from a previous admission showing atrial fibrillation, as evidenced by the absence of P waves, narrow QRS complex, and irregular rhythm, with a pulse rate of 90 beats per minute. 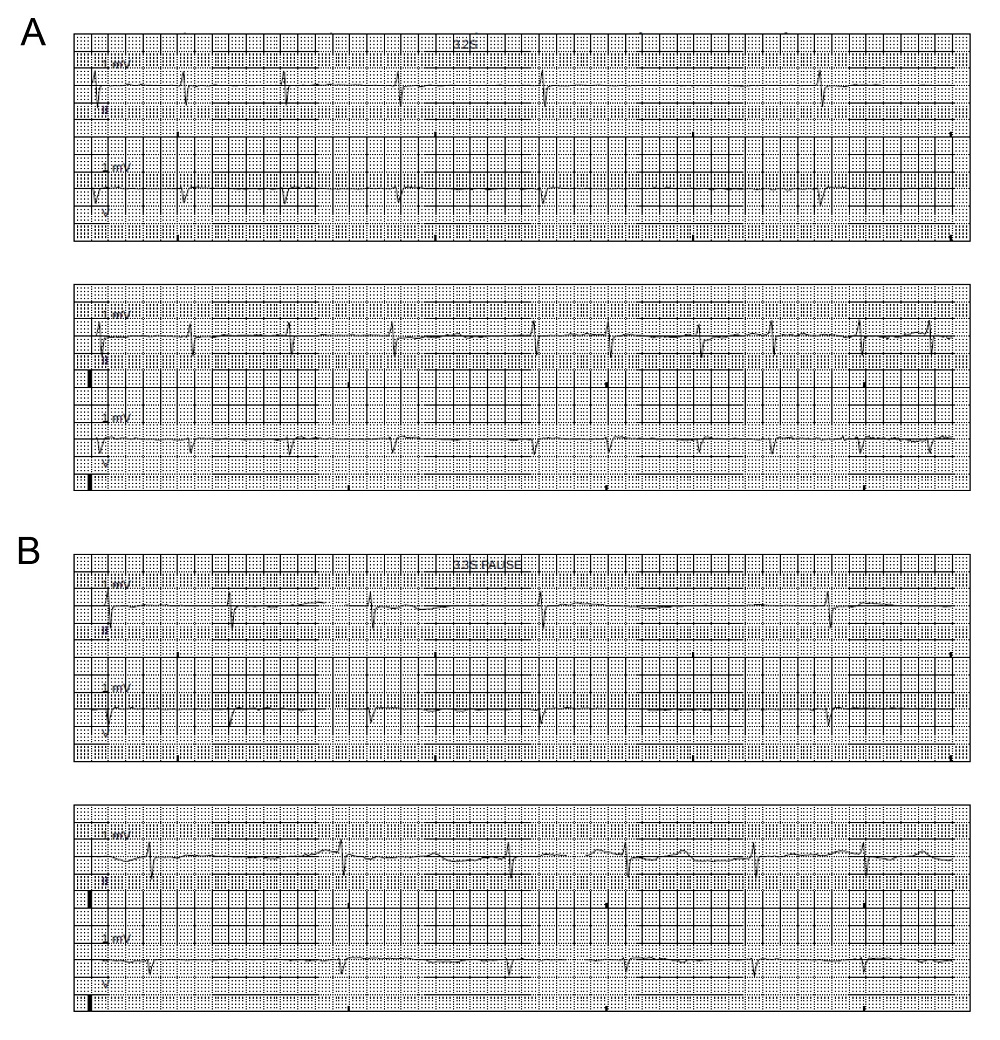 A few days later, her symptoms resolved, with the resolution of bradycardia documented by continuous cardiac monitoring. Interestingly, no significant tachycardia was seen following initiation of thyroxine with maximum heart rates around 101-105 bpm with highest rate on day 2 of levothyroxine of 121 bpm. A week later, her thyroid-stimulating hormone level was down to 15.3 UIU/L, and repeat CXR showed resolved pulmonary edema (Fig. 6). She was discharged in a stable condition on a tapering dose of levothyroxine, with close follow-up with her primary care physician and endocrinology. Chest radiograph was done one-week after initiation of thyroid replacement therapy and diuretics, showing resolution of the previously noted pulmonary congestion and the left-sided pleural effusion.

Untreated hypothyroidism is known to affect almost all organs, including the cardiovascular system. It is associated with a decrease in cardiac output, stroke volume due to decreased myocardial contractility, and an increase in systemic vascular resistance. It can cause cardiac arrhythmias, the most commonly seen conduction abnormalities being sinus bradyarrhythmia, heart block, ventricular tachycardia, and torsade de points. In addition, diastolic hypertension has been observed in the early stages due to peripheral vasoconstriction and central shunting of blood. Pericardial effusions may also be present in such cases due to increased vascular permeability (Salhan et al., 2017). Supraventricular arrhythmias, including atrial fibrillation, can be seen in around 50% of patients with sick sinus syndrome or sinus node dysfunction. In our patient atrial fibrillation with slow ventricular response was present. Correction of any possible underlying reversible cause for bradyarrhythmia should be sought first before consideration of pacemaker implantation.

Our case demonstrates the importance of recognizing severe hypothyroidism, and particularly myxedema coma, as a cause of bradyarrhythmia, especially in elderly patients presenting with nonspecific symptoms such as fatigue, presyncope, syncope or palpitations. Mortality rates associated with myxedema coma with cardiac complications is high. So, appropriate treatment of these patients with thyroid hormone replacement can spare them the need for permanent pacemaker placement, as well as reduce procedure-related risks and complications.

• Omar Kousa, Mohamed Mansour, Dana Awad, Amr Essa and Abdallah Qasim had substantial contributions to the conception or design of the work, formulated the tables and figures, and drafting the work.

• Arindam Sharma and Mark Holmberg critically revised, edited the manuscript substantially and approved the final version of the current version.

• All authors agree and are accountable for all aspects of the work in ensuring that questions related to the accuracy or integrity of any part of the work are appropriately investigated and resolved.

Our institution does not require ethical approval for reporting individual cases or case series. The consent was not obtained from the patient(s) due to unavailability. Any potential patient's identifiers have been removed from the description/images and this paper has been anonymized not to cause any harm to the patient.

The authors declare no funding, no contribution from other persons.

The author declares no conflicts of interests.

Electrocardiogram was done on admission showing atrial fibrillation, as evidenced by the absence of P-waves, narrow QRS complex, and irregular rhythm, with a pulse rate of 60 beats per minute.