Arteriovenous fistula (AVF) is a very rare complication of the abdominal aortic aneurysm (AAA) and is a life-threatening condition with complex clinical features. Timely diagnosis and surgical treatment impose a huge impact on reducing morbidity and mortality for those patients. However, AVF and AAA usually cause no symptoms except when they rupture (Wilmink and Quick et al., 1998.) Most common iliac artery aneurysms develop in patients with AAA, and about 20% of patients with AAA have a common iliac artery aneurysm (Armon et al., 1998.) Infrarenal aortic aneurysms with the involvement of the right iliac artery seem to be associated with a high risk of perforation into the inferior vena cava (IVC), which might result in the iliocaval fistula. It had been rarely reported that hepatic and renal dysfunction be the main manifestations of AAA and AVF in a critically ill patient (Gregoric et al., 1991, Lau et al., 2001, Simsek et al., 2014). Here, we reported a case of a patient with hepatic and renal dysfunction as the main manifestations of AAA and AVF. It was important to be aware of the possibility of AAA and AVF. Once AAA or AVF was suspected, the necessary examinations should be adapted to help differential diagnosis. The gold standard of detecting and characterizing an aortocaval fistula today is computed tomography angiography (CTA) (Rosenthal et al., 1998). But computed tomography (CT) scan has limited usage among critically ill patients, due to the increased risk in patient transport, radiation exposure, and high cost. Our case study demonstrated that ultrasonography was a rapid and non-invasive method for the initial assessment of AAA and AVF.

On Jan 25th, 2017, a 65-year-old man was admitted to Guangdong General Hospital, Guangzhou, China. His presenting complaints were fatigue and oliguria for nine days without abdominal pain. He had a history of hypertension for ten years, without a history of alcohol intake, viral hepatitis or chronic kidney disease. He had not taken any drugs that caused liver and kidney damage recently. On presentation, he had a heart rate of 100 beats per minute and a blood pressure of 120/60 mmHg. Laboratory tests in local hospital suggested severe impaired liver and renal function (alanine transaminase (ALT) 2037 U/L, aspartate transaminase (AST) 1479 U/L, total bilirubin (TBIL) 123.4 μmol/L, direct bilirubin (DBIL) 70.7 μmol/L, serum creatinine (SCr) 378.9 μmol/L, blood urea nitrogen (BUN) 16.6 mmol/L) with unknown cause.

Under the critical condition, the patient was referred to the intensive care unit (ICU). Physical examination revealed an abdominal vascular murmur and bilateral toe discoloration. Bedside ultrasound was routinely performed for vascular screening in ICU, as well as echocardiography and lung ultrasonography. Ultrasound examination revealed an AAA and the right common iliac artery aneurysm with an AVF located between the right common iliac artery and IVC. The latter led to a similar pathophysiological abnormality of portal hypertension that explained hepatorenal dysfunction. A CT scan confirmed the sonographic findings (Fig. 1). 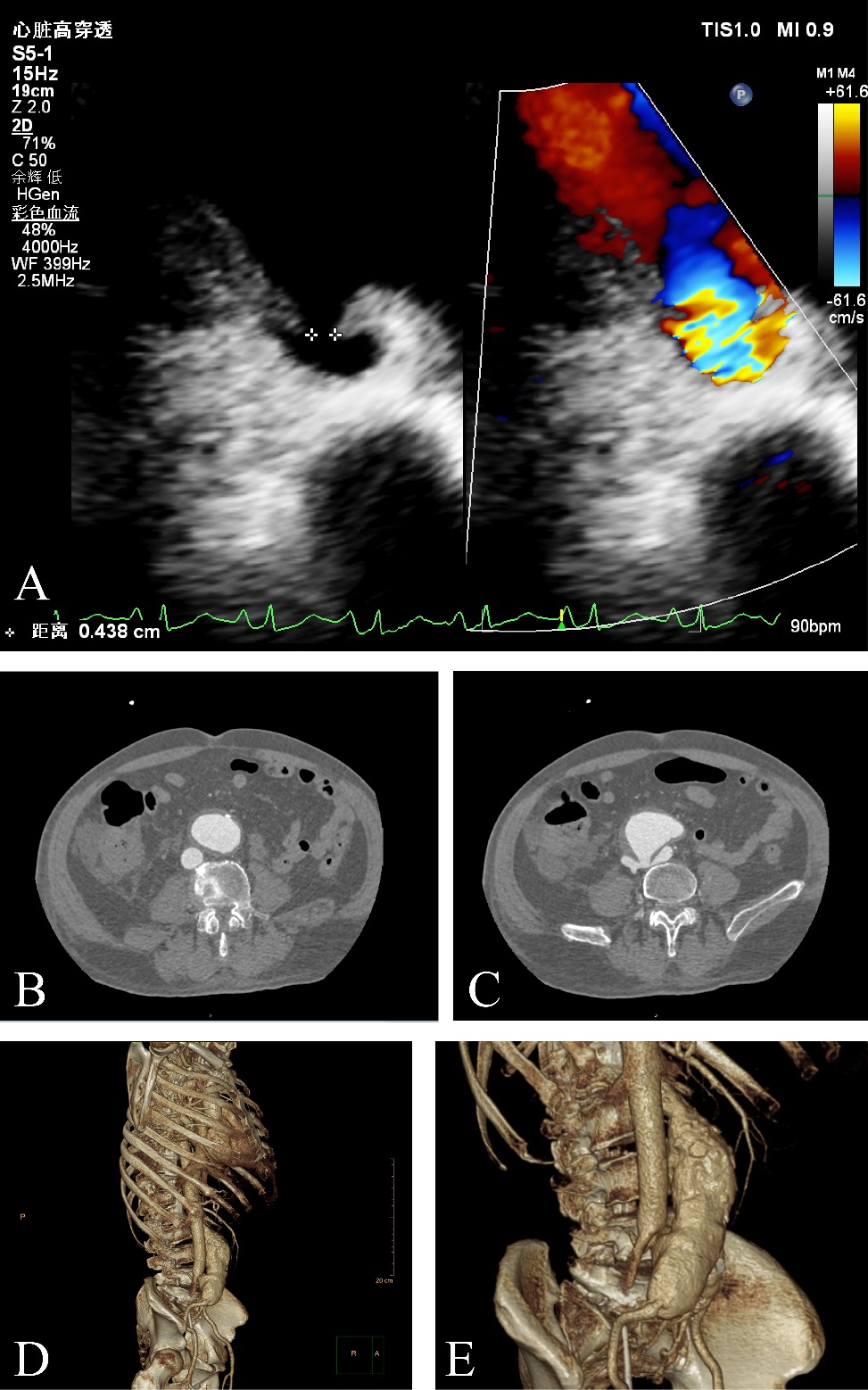 AAA is generally asymptomatic or has atypical clinical manifestations until rupture (Ali et al., 2016; Sidloff et al., 2014; Wilmink and Quick et al., 1998). A delay in diagnosis can cause a potentially fatal outcome as the ruptured vessel no longer functions normally. In our case, the patient had been previously diagnosed with hepatic and renal insufficiency for an unknown reason. Unfortunately, the potential of AAA and AVF that may contribute to this pathology had not been investigated. The awareness of the possibility of AAA and AVF is essential to the correct diagnosis. Only in this way can appropriate examination be adapted to help differential diagnosis.

The main manifestation of the patient in our case was hepatic and renal dysfunction. Although the patient complained of no classically abdominal pain, physical examination revealed an abdominal vascular murmur. Impaired liver and renal function happening in patients with AVF might represent consequences of the hemodynamic derangements of a large volume left-to-right shunt. It results in increased venous return leading to venous hypertension, passive venous congestion, hepatomegaly, ascites, and portal hypertension (Coulier et al., 2004). Gregoric et al. (Gregoric et al., 1991) first described a case of an aortocaval fistula presenting an acute renal failure. Lau et al (Lau et al., 2001) reported a case of an aortoiliac aneurysm with an aortocaval fistula, presenting a moderate degree of renal and hepatic impairment returned to normal merely two days after successfully treated with endovascular stent-grafting. Simsek et al (Simsek et al., 2014) also pointed out that acute renal and hepatic insufficiency could be caused by a long-term untreated fistula as a consequence of increased venous pressure. In our case, acute hepatic and renal dysfunction had developed as a consequence of increased venous pressure. Though the patient underwent intensive care including CRRT and liver protection therapy, the ruptured AAA and AVF contributed to the lethal outcome before the operation.

Base on the abovementioned literature, there was more than one imaging way in the diagnosis of AAA and AVF. CT angiography and magnetic resonance angiography were the traditional options, while 3-D ultrasound and contrast-enhanced ultrasound were proven the utility for immediate detection on the critical scenario. Because of the absence of contrast-enhanced ultrasound in our hospital, we used regular ultrasound examination as a screening tool along with a CT scan for confirmation. Moreover, apart from the diagnosis of AAA and AVF, ultrasound-based assessment of AAA geometry and patient-specific risk factors analysis would help reveal the severity. The individualized biomechanical model predicted morbidity and mortality, which guided the precautions and therapeutic choices.

AVF was a rare pathology, and our case study demonstrated that ultrasonography was a rapid and non-invasive method for the initial assessment of AAA and AVF. However, deficiencies could be found via the post-mortem on our case. It was 9 days since the onset of the symptoms, and we did not have an opportunity for the interventional procedure because of the deteriorations of the clinical condition and acute kidney failure after the admission.

3-D ultrasound is sparsely implemented in the management of AAA but is raising interest for its unique value. We propose that ultrasound should be used more commonly as part of the initial evaluation of the potential and established vascular diseases, particularly in patients presenting hepatorenal dysfunction without a cause.

This work was supported by the grant from National Clinical Key Specialty Construction Project of China (2012-649, 2013-544) and Medical Scientific Research Foundation of Guangdong Province, Guangdong, People’s Republic of China (Grant number: A2018064).

The authors declare that they have no conflict of interest.