Therapeutics of chronic heart failure (HF) had undergone great changes since 1980s, from improvement of hemodynamics to biological properties of the heart. Long-term activation of neuroendocrine system has been considered to be the main pathophysiological mechanism of HF, therefore, the focus on HF has changed from traditional "digitalis, diuretics and vasodilator" to "an attempt to inhibit neuroendocrine system", including angiotensin conversion enzyme inhibitors (ACEI) /angiotensin receptor antagonists (ARB), beta blockers and aldosterone receptor antagonists. Following the use of the "Golden Triangle" medications, the prognosis of HF patients has been improved significantly. Recently, a new medication called LCZ696 occurred in clinical practice, the most representative one of angiotensin receptor neprilysin inhibitor (ARNI). The effectiveness of LCZ696 has been proved in PARADIGM-HF trial, where authors showed that treatment with LCZ696 could lead to a significant reduction in the primary endpoints (-20%), including cardiovascular deaths and HF hospitalizations (Berliner and Bauersachs et al., 2019).

All our processes strictly followed the preferred reporting project of systematic review and meta-analysis (PRISMA). All studies included in the meta-analysis have been previously published, without ethical disputes and informed consent issues. 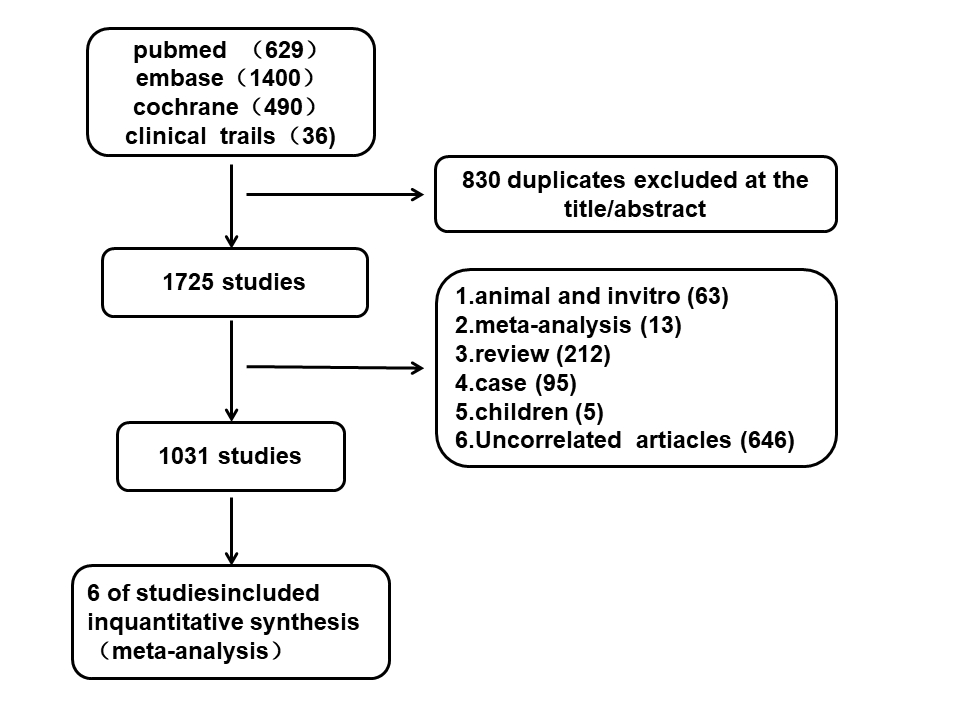 Studies included in the meta-analysis should meet the following criteria:

(II) the subjects enrolled had to be diagnosed as HF;

(IV) all studies had to have data on renal adverse events (regard of as a secondary endpoint or an adverse reaction).

Studies were excluded if they did not have a measurement of renal function at baseline.

Two researchers with knowledge of systematic evaluation independently carried out literature screening and quality evaluation to ensure the objectivity of the process and results. At times of disagreement, a third party was enrolled for final judgment. Studies were excluded if full text could not be obtained. The studies were read in great detail to follow the inclusion and exclusion criteria. The specific screening process used is shown in Figure 1. Following information was extracted from each study (Table 1):

(VI) names of intervention drugs and control drugs and durations of visit;

We used common literature quality evaluation method called the Jadad Score Scale to evaluate literatures from four aspects: the method of randomization, allocation concealment, double-blind design, and the reasons and analysis of withdrawals and dropouts. According to the data type, we selected the outcomes which could reasonably reflect the data as a whole. Outcomes were measured and displayed as Dichotomous variables and the odds ratio (OR) with 95% confidence interval (CI). We tested the heterogeneity of meta-analysis through I2 and forest maps, and if I2 is less than 20%, it was considered to have good homogeneity. P-value of < 0.05 (both side) was considered statistically significant.

A total of 6 clinical RCT trials comparing LCZ696 vs. ACEI/ARB included in the meta-analysis (Desai et al., 2019; Kang et al., 2019; McMurray et al., 2014; Solomon et al., 2019; Solomon et al., 2012; Velazquez et al., 2019). The detailed characteristics of these 6 studies are listed in Table 1. The total number of participants was 14,959, and the number of participants in individual trial ranged from 118 to 8422. The follow up time ranged from 8 weeks to 27 months. All trials were randomized and double-blinded, with parallel-group, placebo and/or active-control group. Only PIONEER-HF trial assessed the study population with acute decompensated HF for hemodynamics stabilization, others assessed patients with chronic stable HF. Studies were quantitatively classified according to the Jadad scale. Multicenter studies were considered to be high-quality studies and assigned a Jadad score ≥ 3.

Decline in renal function was the only outcome that could be extracted. The definition of renal deterioration was slightly different in each clinical trial. Compared to ACEI or ARB alone, LCZ696 resulted in significantly reduced risk of renal function deterioration (odds ratio 0.77, 95% confidence interval 0.61-0.97, P = 0.02) (Fig 2). Both I2 (< 20%) and Forest maps showed only a mild degree of homogeneity between studies (Fig 3). Acute HF is thought to be a condition characterized by cardio-renal syndrome and pathophysiologically different from chronic HF, therefore we also performed a meta-analysis after excluding the PIONEER-HF trial, and we had the same conclusion that LCZ696 significantly reduced the risk of renal function deterioration (odds ratio 0.71, 95% CI 0.52-0.96, P = 0.03) (Fig 4). 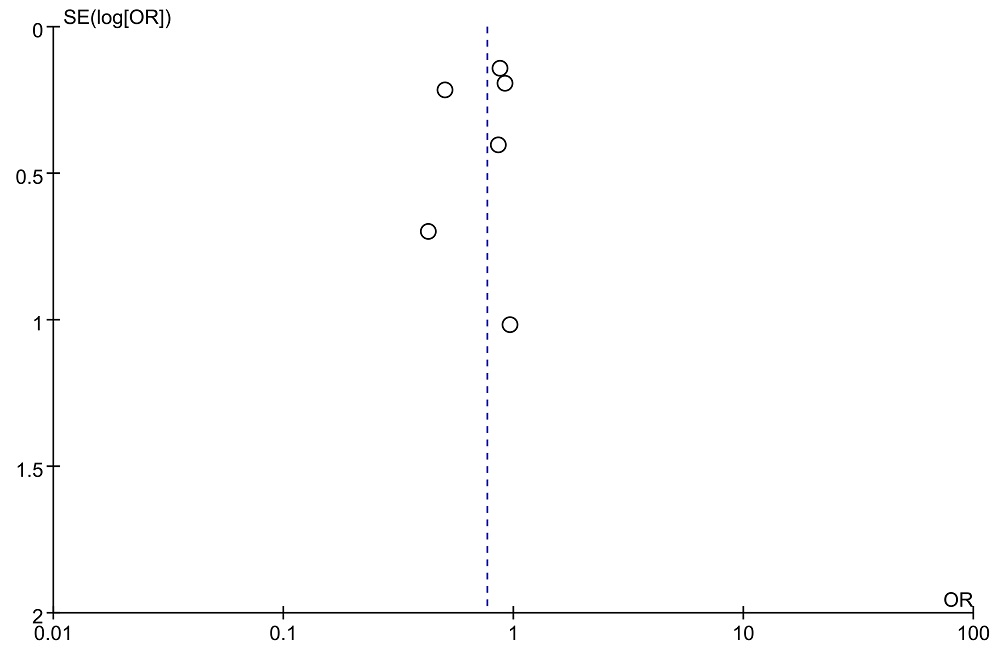 There are a number of important interactions between heart and kidney disease. The interaction is bidirectional and can induce acute or chronic dysfunction in the other organ. Customarily, this condition is described as "cardio-renal syndrome". Worsening renal function (WRF) is strongly associated with the mortality in all HF patients (Löfman et al., 2019). WRF is particularly relevant to the use of renin-angiotensin-aldosterone system (RAAS) inhibitors as these agents may reduce the glomerular filtration rate (GFR) and worse the renal function. LCZ696, as anangiotensin receptor neprilysin inhibitor, seems to have the same problem. However, this meta-analysis showed that LCZ696 had a lower incidence of renal function deterioration compared to ACEI/ARB, indicating that LCZ696 may protect renal function. LCZ696 decomposes into valsartan and neprilysin inhibitor (NEPi) after entering the human body. At present, the mechanism of renal protection by these two compounds has been explained by some animal experiments. Valsartan has been shown to have convincing mechanisms of renal protection through alleviating the sympathetic tone and improving hemodynamic state by inhibiting the activity of RAAS system. NEPi has been reported to have a beneficial effect on the treatment of chronic kidney disease in many experiments, as NEPi may have the ability to cut down the disintegration of natriuretic peptides and increase their bioavailability. Natriuretic peptide, especially atrial natriuretic peptide (ANP) and ventricular natriuretic peptide, can induce vasodilation in the bulbar artery and relative vasoconstriction of the posterior globular artery. By giving valsartan and brain natriuretic enzyme inhibitors to reduce systemic blood pressure and renal perfusion pressure, glomerular arterial-output increased the arterial pressure difference, maintained renal filtration fraction and GFR in high level. More specifically, ANP could inhibit the activation of nuclear factor NF-ĸB and inducible nitric oxide synthase (iNOS) (Kiemer et al., 2000). which is responsible for the production of reactive oxygen species, peroxides, cytokines and chemokines. In addition, ANP can inhibit the production of inflammatory mediators in macrophages, endothelial cells and cardiomyocytes (Della Penna et al., 2015; Rosón et al., 2006). Hence, ANP could promote the anti-inflammatory, anti-oxidative and anti-fibrosis effects in kidney therapy (Judge et al., 2015).

However we recognize 2 major limitations in our meta-analysis. Firstly, only 6 randomized controlled trials of LCZ696 met the inclusion criteria were entered for final analysis. The definition of renal deterioration used by each trial was different and in some RCTs renal deterioration was monitored as secondary endpoint or adverse event. PARADIGM-HF and PARAGONE-HF weighed heavily in this meta-analysis. TRANSITION as well as TITRATION answered the question of when and how to start and titrate LCZ696, showing that LCZ696 should be started as early as possible for hemodynamic stability after acute decompensation of HF, which can be tolerated in terms of renal function. However we can't incorporated the two trials into this meta-analysis for the absense of ACEI/ARB as control group (Senni et al., 2016; Wachter et al., 2019).Secondly, the study population in the 6 trials showed a certain extent of inconsistency. Due to the limited number of qualified trials, we included all the HF patients with different types of HF (preserved ejection fraction or reduced ejection fraction), as well as combined with high blood pressure, or functional mitral regurgitation. It's still interest to know the role of LCZ696 in renal protection in different types of HF, with or without complications.

Regardless of these limitations, this meta-analysis did show that LCZ696 may preserve renal function in HF patients compared with ACEI/ARB alone. While a larger multicenter randomized controlled trial still needs to be further investigated. The primary endpoint should include annually eGFR change and deterioration of renal function, as LCZ696 was reported to have a slower rate of decrease in the eGFR (P < 0.001) when compared to ACEI/ARB in PARAMOUT study (Solomon et al., 2012) and PARADIGM-HF study (McMurray et al., 2014). The declining incidence of adverse events can better explain the function of renal protection (Damman et al., 2018). Hence, it is possible to improve the overall prognosis of patients with HF if renal function can be preserved when using LCZ696.

This study was supported by grants from Provincial and Ministry Joint Major Projects of National Health Commission of China (WKJ-ZJ-1703 to Meixiang Xiang) and from the National Natural Science Foundation of China (NO. 81700412).

The authors reported no relationships that could be construed as a conflict of interest.