Suicide is a significant cause of mortality affecting each age, gender, and country. The World Health Organization (WHO) [1] defined suicide as an act deliberately initiated and performed by a person in the full knowledge or expectation of its fatal outcome.

Potential explanations for variations in suicide rates include socioeconomic factors, cultural factors (discrimination, abuse, violence, conflictual relationships), health system and social factors (difficult health care access, availability of methods for suicide, inappropriate media content report) [6], public health initiatives to improve the detection and treatment of mental illness, mental health, and suicide prevention. Another pivotal risk factor to be considered is the current COVID-19 pandemic. During the past two years, collective quarantine measures have already been associated with an increased risk of suicide [7]. The health and economic consequences of the pandemic could be an additional risk factor for the suicide rate [8, 9]. Job loss, regression, and unemployment could have dramatic psychological effects and increase the risk of suicide. The level of development in each country also affects the link between economic crisis and suicide: the economic inequalities, the solidity of the health system, the ability to prevent suicide at the state level, and the perceived social integration are essential elements to value the suicidal phenomenon [10, 11]. Currently, the long-term emotional effects of “social distancing”, home confinement, cohabitation with a family member affected by COVID-19, and the limitations in health care access are not well known. The fear of being positive for COVID-19 or infecting family members and the economic consequences of the pandemic (losing the job) generates an intense state of anxiety and concern for the future, which will affect the mental health of the population and the risk of suicide [12].

The present study aims to report and analyze the data relating to suicides collected by the Institute of Forensic Medicine of Foggia from January 2015 to December 2021, compared to the data presented in the literature. This study seeks to summarize the characteristics of suicide victims in order to suggest a supportive and preventive strategy to reduce the suicide rate.

The present study represents a retrospective analysis of crime scene investigations and autopsies records relating to all suicide cases observed from January 2015 to December 2021 in the Institute of Forensic Medicine of Foggia. The Institute of Forensic Medicine covers the entire area of ​​the Province of Foggia with a population of nearly 800,000 inhabitants, with a slight predominance of the female population. From every necroscopic report we analyzed: the sex of the victim, method of suicide, age, the season of death, and presence of psychiatric or addiction history; some reports are incomplete and do not present all the necessary data. The survey conducted and the analysis of such variables are purely statistical, providing descriptive information. 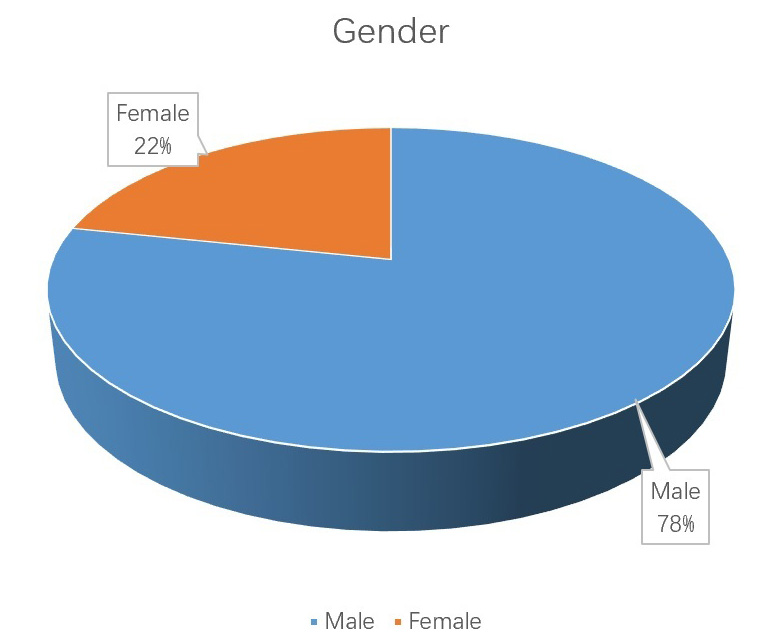 Gender of the deceased. 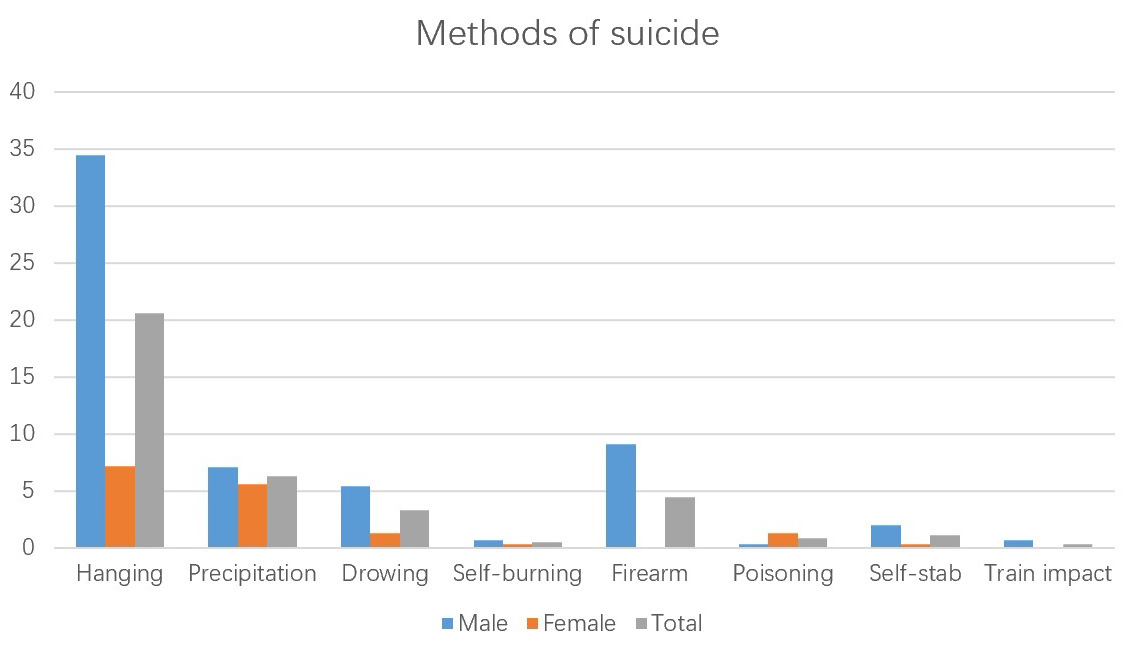 Our data analysis shows that the women do not use firearms to commit suicide but choose poisoning or precipitation. In women, the suicide rate is stable, even in the 60–79 age group, while in men, it decreases. These differences may be due to the lack of age data in more than half of the female victims in our series. 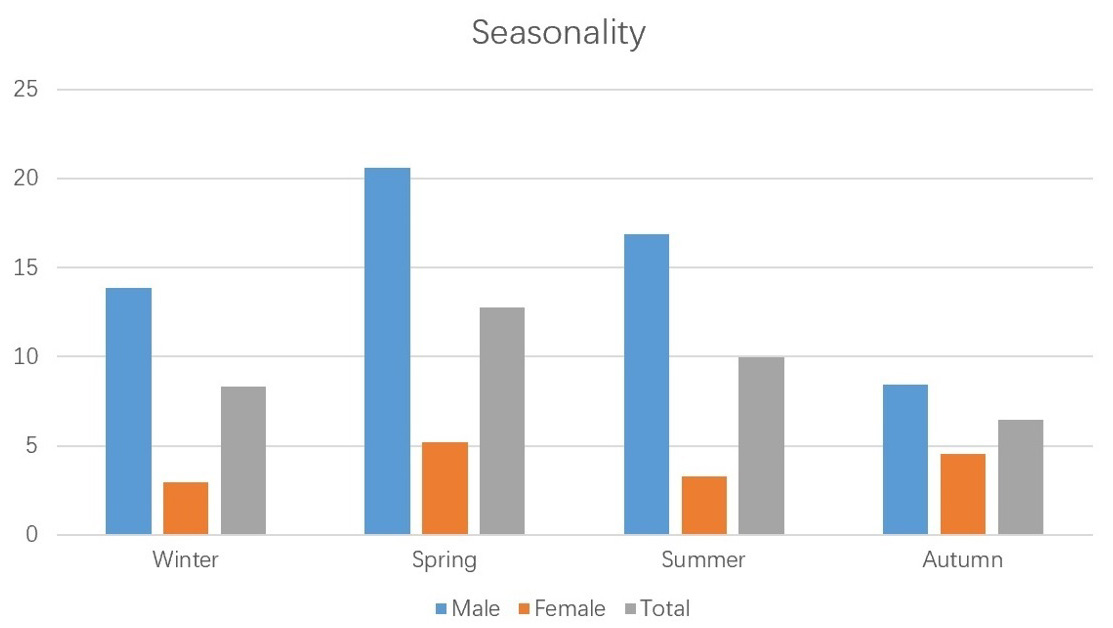 Seasonality of the suicide (cases per 100,000 population).

We analyzed the presence of psychiatric or addiction history, shown in Fig. 6, finding them in only 32 cases (14.1%). 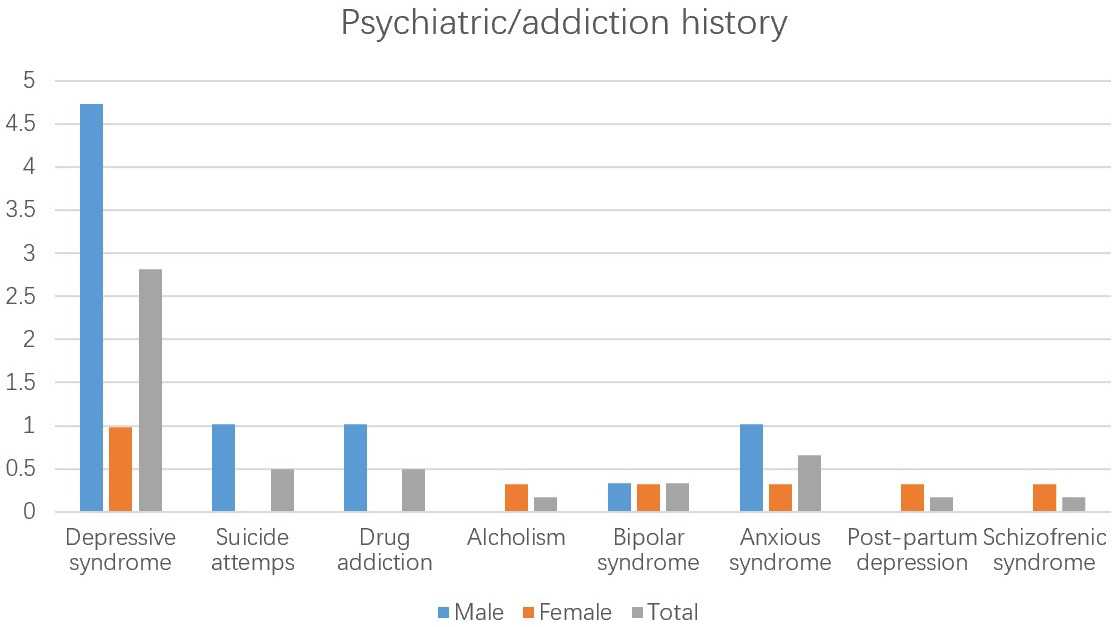 Most subjects with diagnosed psychiatric illness suffer from depressive syndrome (53.12%) corresponding to 2.8 cases per 100,000. There is no history of suicide attempts and drug addiction in female victims in our data. The scarcity of deceased with a psychiatric/addiction history could be due to the difficulty of collecting clinical data and/or sub-clinical and undiagnosed diseases.

The analysis of our case series tried to show the suicide rate, methods, age, seasonality, and psychiatric anamnesis among the inhabitants of the province of Foggia, paying specific attention to the differences between men and women.

First, an important consideration is that the males are more vulnerable to suicidal risk, with a relatively stable trend over the analyzed period ( = 3.45). These data are in disagreement with the prevalence of major depression in women than in men [13]. In our series, many victims with a diagnosis of major depression are men.

According to literature data, women commit less suicide than men for social questions [14]. Traditionally, in order for men to be masculine, they are expected to display attributes such as strength, power, and competitiveness and show emotion and affectionless openly [15]. Women are more likely to be weak and to seek help. The traditional role of the male gender appears to increase the risk of suicidal behavior in men [16, 17]. Single marital status, unemployment, retirement, and physical illness are commonly known risk factors for male suicidal behavior; from the literature study, relationship problems are the main reason for the suicide act [18].

Instead, women attempt suicide three times more often than men, even though they are less likely to complete suicide [19]. We observed only three cases with previous suicide attempts in our series, while no women reported any attempt. This could be in agreement with literature data that report a minor efficiency in suicide attempts in women in addition to the inadequate anamnestic collection that does not allow the collection of this data.

Regarding the methods of suicide, the most commonly used is hanging (54.87%) for both men and women in the present study. These data agree with other studies [22], and can be explained the easy finding of a suitable means (e.g., ropes, laces, sheets) and with the needs of poor organization.

Falling from height (16.9%) is the second most frequent method observed in our series. This is a method of suicide easily accessible that does not need precise structuring but has a high lethal outcome.

The higher gender-related differences in the methods used to commit suicide emerge from the use of firearms that we observed in 27 cases of male suicides (11.95%), while no cases were involved.

The self-poisoning method of suicide, despite a small number of registered cases, is most frequently usedby women than men.

As the previous observations, we can assume that, while men select more destructive methods of suicide (firearms and fall from height), women choose destructive and immediately fatal methods (fall from height) and not disfiguring and not immediately fatal methods (self-poisoning). These data are in agreement with other studies in which the cases are extrapolated from a socio-cultural context similar to our territory [23], while they are in disagreement with other social realities where the methods of suicide are differently distributed in various population-group [24].

In our study, the most significant number of cases are in the 80–89 age group, as in other studies [25], but we observed cases in every single age group; these data demonstrate an interest in all age groups. Regarding the age of suicide, the most significant number of cases of suicide of males are in the 80–89 and the 90+ years age groups. Our data agree with other studies showing a higher incidence of suicide rate in the elderly over the 80s and the youth group [17]. Regarding the 30–59 age group of males, the suicide numbers may be due to their social role or the loss of jobs and economic problems [26], and to the loneliness of living alone [27]. The reasons that lead males in the 80–89 years age group to commit suicide are mainly linked to the condition of living alone and widowing [28] or to the presence of various disabling pathologies [29]. On the other hand, women do not show distribution peaks among the various age groups, showing no cases in the 10–19 and 90+ age groups. These data do not agree with other studies revealing an increase in suicide rates related to age [30].

In our study, the seasons in which the most suicides occur are spring and summer. Concerning the sex of the victims, spring is the season when both males and females commit suicide more frequently. These results agree with others studies [31], where the peak of suicides occurred in spring. Various authors attempted to explain this trend. Durkheim et al. [32] asserted that seasonal neurochemical changes in the human body were implicated in the seasonality of suicidal behavior. Other authors hypothesized that the change in social life in the various seasons and an increase in spring and summer could affect the suicide rate [33]. Yarza et al. [34] demonstrated that suicide attempts become more frequent when the temperature is anomalously high compared with an average period. ther authors highlighted that the temperature changes and the light/dark cycle duration affected the seasonal variability of suicidal-rate [35, 36].

Identifying the population groups at risk can lead to the identification of fragile individuals. More structures and professionals could help give patients a better assessment and medical assistance, especially those with psychiatric pathologies, and provide more support to the elderly.

The evaluation of anamnestic indices in the general population can assist the suicide prevention, such as the presence of depression through the PHQ-9 index (also usable in non-psychiatric patients) [37] and the presence of suicidal ideation with the Beck scale [38, 39].

Our study tells of a dramatic cross-section of the population’s life in the province of Foggia, suggesting the need to implement social support for the elderly population. Furthermore, any underestimation of psychiatric diagnoses must reflect the difficulty or reluctance of accessing psychiatric facilities. Our data, however, are partially incomplete; the age of some victims, such as the marital and professional status, is unknown. These leaks lead to lesser effectiveness of the individuation of people at suicidal risk.

Suicide is a worldwide and dramatic issue both from a socio-economic and public health point of view that needs to be better understood to carry out an action to prevent it [40].

The present study analyzed autopsy reports of cases of suicide observed in the period 2015–2021 by the Institute of Forensic Medicine of Foggia. Rates were consistently higher for males than females, and they have remained seemingly constant during the considered period. The age group with many suicides between the men is 30–49-years-old and over 80-years-old while women maintain a reasonably stable suicide rate. Most suicides occur during spring, and the method most used is hanging. Even psychiatric comorbidities play an important role, showing that depressive syndrome is the most common condition associated with suicide, higher in males.

Studying suicidality in a well-defined population can help to implement targeted interventions. In the province of Foggia, psychological support can play a fundamental role, especially in middle age (those in which social obligations become heavier) and in old age (characterized by the loneliness of the elderly). Considering the seasonality data, general practitioners could assist elderly patients in identifying the people most at risk of suicide.

Improving the regional health network (beds, nurses, and medical staff) could have positive repercussions on the decrease in the regional suicide rate and consequently also in the local area of Foggia. More structures and professionals could help give patients a better assessment and medical assistance, especially those with psychiatric pathologies, and provide more support to the elderly.

The results of this study highlight the importance of personalized and gender-specific interventions and can inform policy-makers in the development of provincial suicide prevention plans and public health interventions.

All procedures performed in the study were in accordance with the ethical standards of the institution and with the 1964 Helsinki Declaration and its later amendments or comparable ethical standards. Consent for publication was obtained from Ethical Committee of Foggia (Approval number 099).

The authors declare no conflict of interest. LC is serving as one of the Guest editors of this journal. We declare that LC had no involvement in the peer review of this article and has no access to information regarding its peer review. Full responsibility for the editorial process for this article was delegated to Akira Tsujimura.