Depression and sleep issues, such as poor sleep quality and sleep disorders, are common health issues among young adult men [1, 2]. Between 2013 and 2016, 5.5% of men aged 20–39 years in the United States reported depression [1]. Moreover, in a sample of young Australian men, more than one-quarter had obstructive sleep apnea, 10.6% had chronic insomnia, 1.9% had restless leg syndrome, and 9.6% reported abnormal periodic leg movements during sleep [3]. Overall, 42.3% of the young men had at least one sleep disorder [3]. Depression and sleep issues have also been found to be related to one another, with depression influencing sleep issues [4, 5], and sleep issues influencing depression [6]. The Centers for Disease Control and Prevention reported that people who reported short sleep, defined as fewer than seven hours of sleep per night, were more likely to be depressed than those who slept more than seven hours per night [7]. Additionally, in a longitudinal study, insomnia that lasted at least two weeks predicted later major depressive episodes and major depressive disorder [6].

Research has also shown that the prevalence of depression and sleep issues differs by age among men. In a longitudinal study of twins in Norway, 4.4% of the men reported major depressive disorder when they were in their twenties, compared to 3.3% when they were in their thirties and forties, suggesting that major depressive disorder prevalence decreases with age among men [8]. In a sample of men aged 20 to 100 years, researchers also found that age influenced likelihood of a sleep apnea diagnosis, with the prevalence of sleep apnea increasing in age, while the severity (indicated by number of sleep apnea events and minimum oxygen saturation) decreased with age [9]. In data from the Behavioral Risk Factor and Surveillance System survey, the likelihood of men reporting trouble falling asleep or sleeping too much decreased over time from ages 18–54 years [10]. However, there has been little evidence regarding how age influences the association between depression and sleep, particularly among young adult men. Chen et al. [11] examined the moderating effect of age on the relationship between insomnia and depression (measured as one item, “feeling blue”) among men from young adulthood into late adulthood, and they found that the effect size of insomnia on depression decreased with age, with the age groups 35–44 years and 55–64 years having the smallest effect sizes. These findings can tell us about age differences between young, middle and older adult men, but it does not distinguish by age among young adult men. Therefore, the current study explores the relationship between depression and sleep among young adult men and the moderating effect of age on the association.

The present research employed a secondary analysis of the National Longitudinal Survey of Youth 1979 for Children and Young Adults (NLSY79 CY). This data set was administered by the U.S. Bureau of Labor Statistics to American young adults. This study utilizes data collected in 2014, and this data includes health information related to depression and sleep. Respondents who were not interviewed or who declined to answer how many hours they slept on average were excluded from analysis. From 5716 respondents, 2777 men were selected for the final sample as this study only focused on men.

Young adult men were asked to report how many hours they sleep on average. The exact question is as follows: “On a typical weeknight, how many hours of sleep do you usually get?” Thus, a higher score on this variable indicates that respondents slept more hours on average.

The Center for Epidemiologic Studies Depression Scale (CES-D), which is one of the most prevalent scales to measure depression, was used to examine levels of depression among young adult men [12]. We used the short-form with eleven items and a four-point Likert-type scale. The specific response options range from “rarely or none of the time (1 day a week)” to “most or all of the time (5–7 days)”. Questions included, “I felt I could not shake off the blues, even with help from family or friends”; “I had troubles keeping my mind on what I was doing”; “I felt depressed”; “I felt lonely”; and “I felt life was not worth living”. One of the eleven items assessed happiness, so that item was reverse-coded. All items were summed, and a higher total score indicated higher levels of depression.

Age was assessed by having respondents indicate their current age in years in 2014, when the data was collected. Two age groups were used to identify the moderating effect of age on the association between depression and sleep: those younger than thirty years and those older than thirty years. The range of age is from 18 to 45. 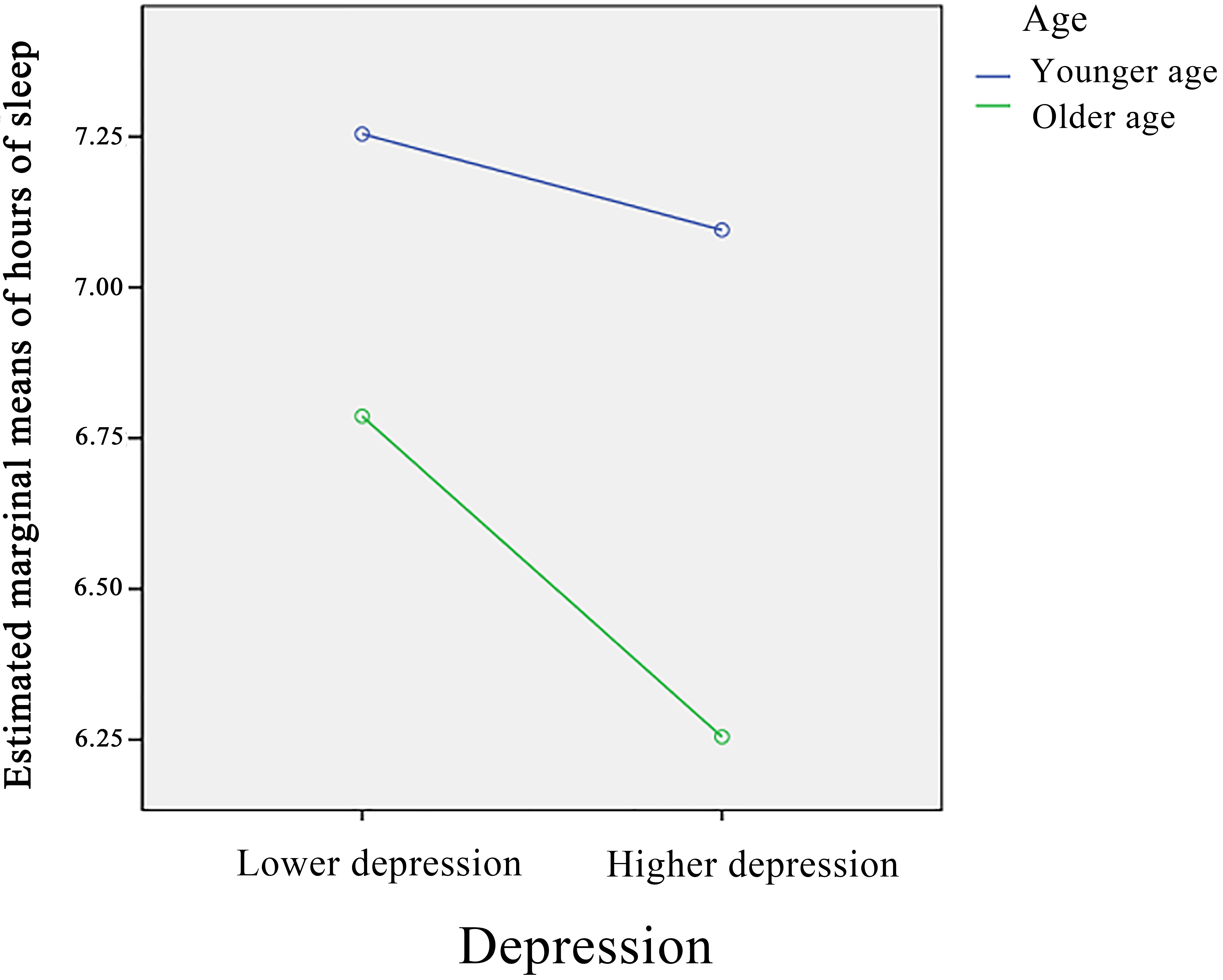 Depression and age on hours of sleep across young adult men.

Generally, adequate sleep is critical to maintaining physical and psychological health [5, 7]. Studies have shown that depression and sleep are influence each other in both directions. Some studies reported that depression influenced sleep [4, 5, 16], while other research demonstrated that low quality of and fewer hours of sleep affected depression [6, 7]. Given that depression among young adult men is common [1, 2] and that the levels of depression and symptoms are getting worse among men over time [17], an increased number of young men may suffer from depression and this phenomenon may influence their hours of sleep because depression often leads to insomnia or other challenges in sleep [4, 5]. In addition, young adulthood is the first stage of entering the job market, but many young adult men have reported difficulties finding adequate employment as well as low job satisfaction [18]. As such, there are diverse factors such as job insecurity which can increase mental health problems. As a result, depressed young adult men are more likely to sleep for fewer hours, and this relationship was significant in this study. Given that getting adequate sleep is associated with many health benefits [19] and depression can buffer against a good night’s sleep [4, 5], it is necessary to provide a tailored mental health service for young adult men to ensure that they obtain adequate sleep. However, little attention has been paid to young adult men’s sleep and depression.

Affirming previous findings, this study also revealed that older age negatively influenced hours of sleep and quality of sleep [6]. As individuals age, their quality of sleep might decrease due to physical changes [20]. This phenomenon may be due to natural changes in the body, but it may greatly impact physical health, leading to a weaker immune system and difficulties in daily life [21]. Given that sleep is one of our most basic needs, young adults over the age of thirty, even though they are regarded as young adults, may encounter challenges in their workplace or in socializing with others due to lack of sleep. Young adult men are mainly regarded as being very healthy compared to other gender and generations. For this reason, young adult men’s sleep, which is one critical factor influencing one’s health, has been given less attention and little is known about men’s sleep during young adulthood. However, most people who are older might face low quality of sleep because of reduced hours of sleep. Therefore, older young adults, such as those in their thirties, should be provided with higher accessibility to sleep clinics and information and knowledge about sleep disorders.

Although this study pointed out the importance of the role of age on the relationship between depression and sleep among young adult men, the results should be interpreted in the context of limitations. First, as the current study was conducted based on a cross-sectional data, it is not reasonable to explain a cause and effect relationship. Thus, we recommend that longitudinal approaches are needed in future research to more deeply understand the relationship between sleep and depression among young adult men. Second, due to the use of pre-existing data, we were not able to consider other potential variables which may influence sleep. We suggest that future studies account for other covariates that may produce another interpretation.